We thank Mrs. Joanne Rozett for her generous donation. Thank you to Hank Wristen for providing biographical information.

Scope and Content: The diary is in two volumes. It begins with a brief note on 7 December 1941, and ends in Nov 1945. Rozett describes in vivid detail his experiences on board the USS Moreno in the Mediterranean arena. 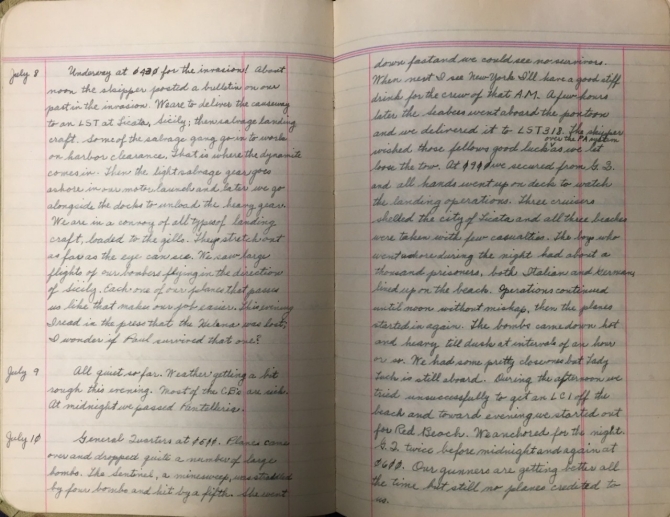 July 8: Underway at 0430 for the invasion! About noon the skipper posted a bulletin on our part in the invasion. We are to deliver the causeway to an LST at Licata, Sicily; then salvage landing craft. Some of the salvage gang go in to work on harbor clearance. That is where the dynamite comes in. Then the light salvage gear goes ashore in our motor launch and later we go alongside the docks to unload the heavy gear. We are in a convoy of all types of landing craft, loaded to the gills. They stretch out as far as the eye can see. We saw large flights of our bombers flying in the direction of Sicily. Each one of our planes that passes us like that makes our job easier. This evening I read in the press that the Helena was lost; I wonder if Paul survived that one?

July 9: All quiet so far. Weather’s getting a bit rough this evening. Most of the CB’s are sick. At midnight we passed Pantelleria.

July 10: General Quarters at 0500. Planes came over and dropped quite a number of large bombs. The Sentinel, a minesweep, was straddled by four bombs and hit by a fifth. She went down fast and we could see no survivors. When next I see New York I’ll have a good stiff drink for the crew of that A.M. A few hours later the Seabees went aboard the pontoon and we delivered it to LST 318. The skipper wished those fellows good luck over the PA system as we let loose the tow. At 0900 we secured from G.Q. and all hands went up on deck to watch the landing operations. Three cruisers shelled the city of Licata and all the beaches were taken with few casualties. The boys who went ashore during the night had about a thousand prisoners, both Italian and German, lined up on the beach. Operations continued until noon without mishap, then the planes started in again. The bombs came down hot and heavy till dusk at intervals of an hour or so. We had some pretty close ones but Lady Luck is still aboard. During the afternoon we tried unsuccessfully to get an LCI off the beach and toward evening we started out for Red Beach. We anchored for the night. G.Q. twice before midnight and again at 0600. Our gunners are getting better all the time but still no planes credited to us. 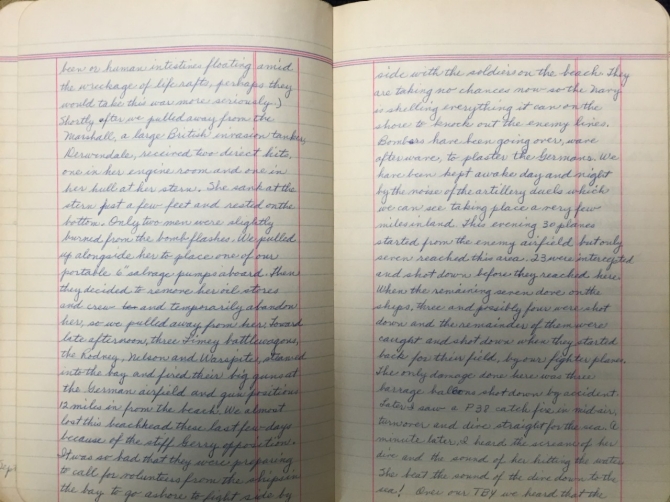 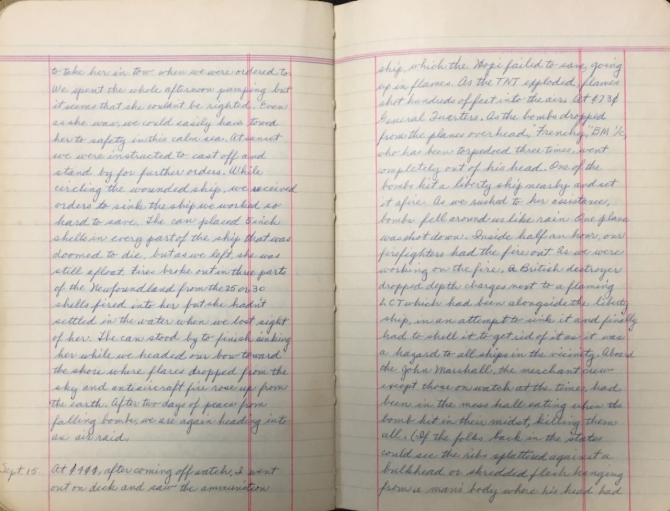 September 14: …to take her in town when we were ordered to. We spent the whole afternoon pumping but it seems that she couldn’t be righted. Even as she was, we could easily have towed her to safety in this calm sea. At sunset we were instructed to cast off and stand by for further orders. While circling the wounded ship, we received orders to sink the ship we worked so hard to save. The can placed 5 inch shells in every part of the ship that was doomed to die, but as we left, she was still afloat. Fires broke out in three parts of the Newfoundland from the 25 or 30 shells fired into her but she hadn’t settled in the water when we lost sight of her. The can stood by to finish sinking her while we headed our bow toward the shore where flares dropped from the sky and antiaircraft fire rose up from the earth. After two days of peace from falling bombs, we are again heading into an air raid.

September 15: At 0400, after coming off watch, I went out on deck and saw the ammunition ship, which the Hopi failed to save, going up in flames. As the TNT exploded, flames shot hundreds of feet into the air. At 0730 General Quarters. As the bombs dropped from the planes overhead, “Frency,” BM 1/C, who has been torpedoed three times, went completely out of his head. One of the bombs hit a liberty ship nearby and set it afire. As we rushed to her assistance, bombs fell around us like rain. One plane was shot down. Inside half an hour, our firefighters had the fire out. As we were working on the fire, a British destroyer dropped depth charges next to a flaming LCT which had been alongside the liberty ship, in an attempt to sink it and finally had to shell it to get rid of it as it was a hazard to all ships in the vicinity. Aboard the John Marshall, the merchant crew except those on watch at the time, had been in the mess hall eating when the bomb hit in their midst, killing them all. (If folks back in the states could see the ribs splattered against a bulkhead or shredded flesh hanging from a man’s body where his head had been or human intestines floating amid the wreckage of life rafts, perhaps they would take this war more seriously.) Shortly after we pulled away from the Marshall, a large British invasion tanker, Derwindale, received two direct hits, one in her engine room and one in her hull at her stern. She sank at the stern first a few feet and rested on the bottom. Only two men were slightly burned from the bomb flashes. We pulled up alongside her to place one of our portable 6” salvage pumps aboard. Then they decided to remove her oil stores and crew and temporarily abandon her, so we pulled away from her toward late afternoon, three Limey battlewagons, the Rodney, Nelson and Warspite, steamed into the bay and fired their big guns at the German airfield and gun positions 12 miles in from the beach. We almost lost this beachhead these last few days because of the stiff Gerry opposition. It was so bad that they were preparing to call for volunteers from the ships in the bay to go ashore to fight side by side with the soldiers on the beach. They are taking no chances now so the Navy is shelling everything it can on the shore to knock out the enemy lines. Bombers have been going over, wave after wave, to plaster the Germans. We have been kept awake day and night by the noise of the artillery duels which we can see taking place a very few miles inland. This evening 30 planes started from the enemy airfield but only seven reached this area. 23 were intercepted and shot down before they reached here. When the remaining seven dove on the ships, three and possibly four were shot down and the remainder of them were caught and shot down when they started back for their field, by our fighter planes. The only damage done here was three barrage balloons shot down by accident. Later I saw a P38 catch fire in mid-air, turn over and dive straight for the sea. A minute later, I heard the scream of her dive and the sound of her hitting the water. She beat the sound of the dive down to the sea! Over our TBY we heard that the …