For extraordinary heroism and outstanding performance of duty in action against enemy forces in the Republic of Vietnam from 1 July 1970 to 31 December 1971. Throughout this period, Helicopter Attack (Light) Squadron THREE, operating in the THIRD and FOURTH Military Regions of the Republic of Vietnam, successfully executed its primary mission of providing quick reaction, close air support and combat logistic support for United States and Vietnamese military forces on the rivers and coast of the Vietnam Delta Region. Additionally, the squadron flew countless missions in support of Vietnamese units and earned an excellent reputation and respect among the Vietnamese ground forces. The support provided by Helicopter Attack (Light) Squadron THREE's gunship helicopters with their quick reaction capability and logistic helicopters with their completion of innumerable medical evacuation, logistical support and troop insertion missions, contributed substantially to the morale and combat effectiveness of the ground units. The squadron's operations were consistently characterized by sensible tactics and meticulous adherence to the rules of engagement, ensuring maximum deterrence of the enemy with minimum risk to friendly troops and civilians. By their outstanding courage, resourcefulness and aggressive fighting spirit in combat against a frequently well-equipped, well-trained and often numerically superior enemy, the officers and men of Helicopter Attack (Light) Squadron THREE reflected great credit upon themselves and upheld the highest traditions of the United States Naval Service. 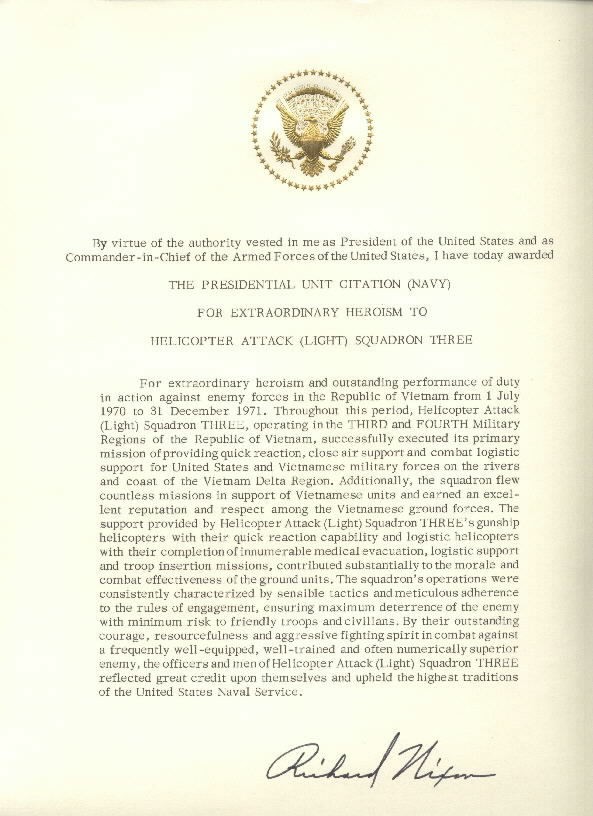