For extraordinary heroism and outstanding performance of duty from 18 October to 5 December 1968 while engaged in armed conflict against enemy forces in the Republic of Vietnam. Commander Task Group 194.0 initiated and prosecuted the first of several interdiction campaigns to sever enemy lines of communication and resupply and to establish the legal government in areas previously held by the enemy. The naval units engaged in Operation SEA LORDS consistently displayed the striking power and professionalism which were to mark this and following campaigns. Tasked with routing a myriad of enemy forces from their previous sanctuaries, personnel of Commander Task Group 194.0 ventured courageously into little-known canals and back-water areas, fighting valiantly through countless intense enemy rocket and automatic weapons attacks. The naval units, through their persistent and aggressive strikes against enemy strongholds, were eminently successful in their campaign to interdict enemy resupply routes and base areas throughout the lower Mekong delta region. The courage, professionalism, and dedication displayed by the officers and men of Commander Task Group 194.0 reflected credit upon themselves and were in keeping with the highest traditions of the United States Naval Service. 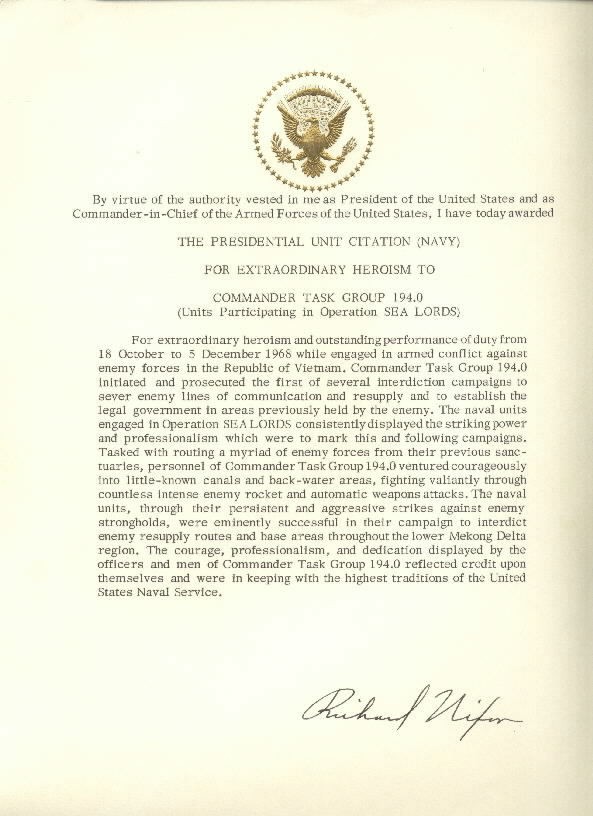