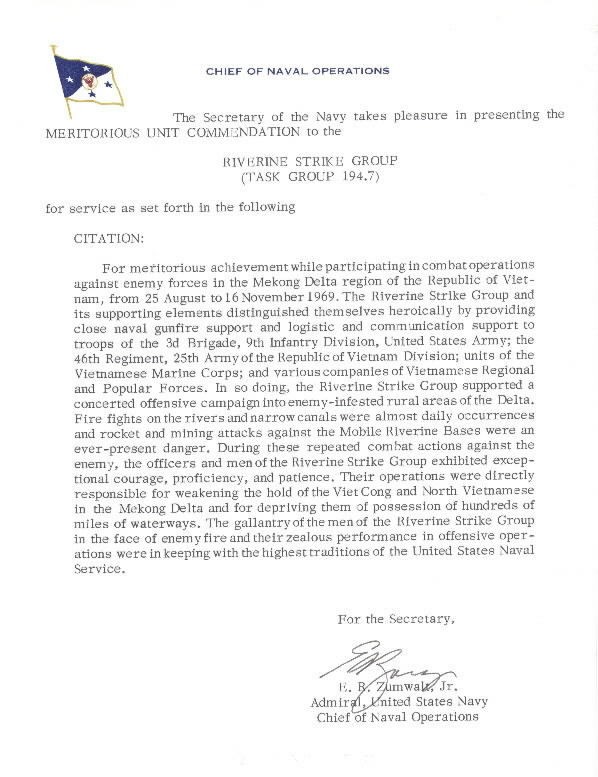 For meritorious achievement while participating in combat operations against enemy forces in the Mekong Delta region of the Republic of Vietnam, from 25 August to 16 November 1969. The Riverine Strike Group and its supporting elements distinguished themselves heroically by providing close naval gunfire support and logistic and communication support to troops of the 3d Brigade, 9th Infantry Division, United States Army; the 46th Regiment, 25th Army of the Republic of Vietnam Division; units of the Vietnamese Marine Corps; and various companies of Vietnamese Regional and Popular Forces. In so doing, the Riverine Strike Group supported a concerted offensive campaign into enemy-infested rural areas of the Delta. Fire fights on the rivers and narrow canals were almost daily occurrences and rocket and mining attacks against the Mobile Riverine Bases were an ever-present danger. During these repeated combat actions against the enemy, the officers and men of the Riverine Strike Group exhibited exceptional courage, proficiency, and patience. Their operations were directly responsible for weakening the hold of the Viet Cong and North Vietnamese in the Mekong Delta and for depriving them of possession of hundreds of miles of waterways. The gallantry of the men of the Riverine Strike Group in the face of enemy fire and their zealous performance of offensive operations were in keeping with the highest traditions of the United States Naval Service.