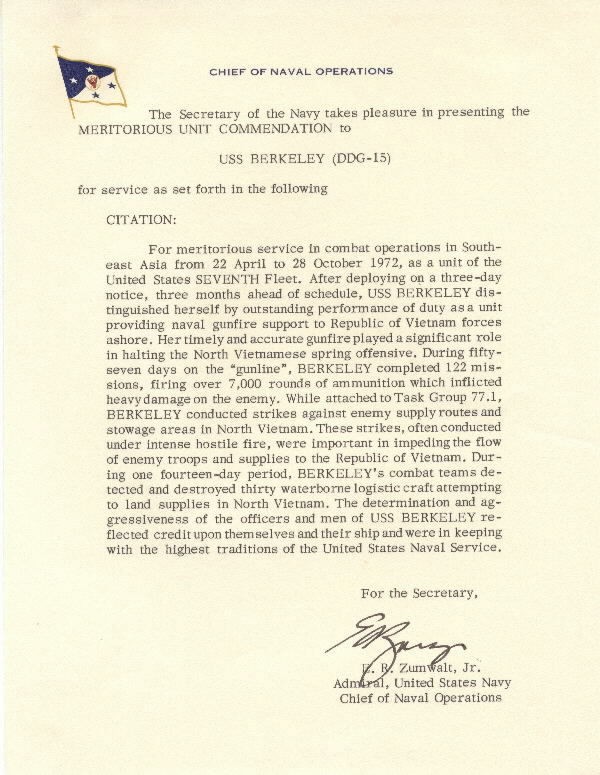 For meritorious service in combat operations in Southeast Asia from 22 April to 28 October 1972, as a unit of the United States SEVENTH Fleet. After deploying on a three-day notice, three months ahead of schedule, USS BERKELEY distinguished herself by outstanding performance of duty as a unit providing naval gunfire support to Republic of Vietnam forces ashore. Her timely and accurate gunfire played a significant role in halting the North Vietnamese spring offensive. During fifty-seven days on the "gunline", BERKELEY completed 122 missions, firing over 7,000 rounds of ammunition which inflicted heavy damage on the enemy. While attached to Task Group 77.1, BERKELEY conducted strikes against enemy supply routes and stowage areas in North Vietnam. These strikes, often conducted under intense hostile fire, were important in impeding the flow of enemy troops and supplies to the Republic of Vietnam. During one fourteen-day period, BERKELEY's combat teams detected and destroyed thirty waterborne logistic craft attempting to land supplies in North Vietnam. The determination and aggressiveness of the officers and men of USS BERKELEY reflected credit upon themselves and their ship and were in keeping with the highest traditions of the United States Naval Service.