DS dated 2 May 1795. "proof of ownership of a ship or vessel." Certifying ownership of the ship Ganges. Signed twice by Tingey. 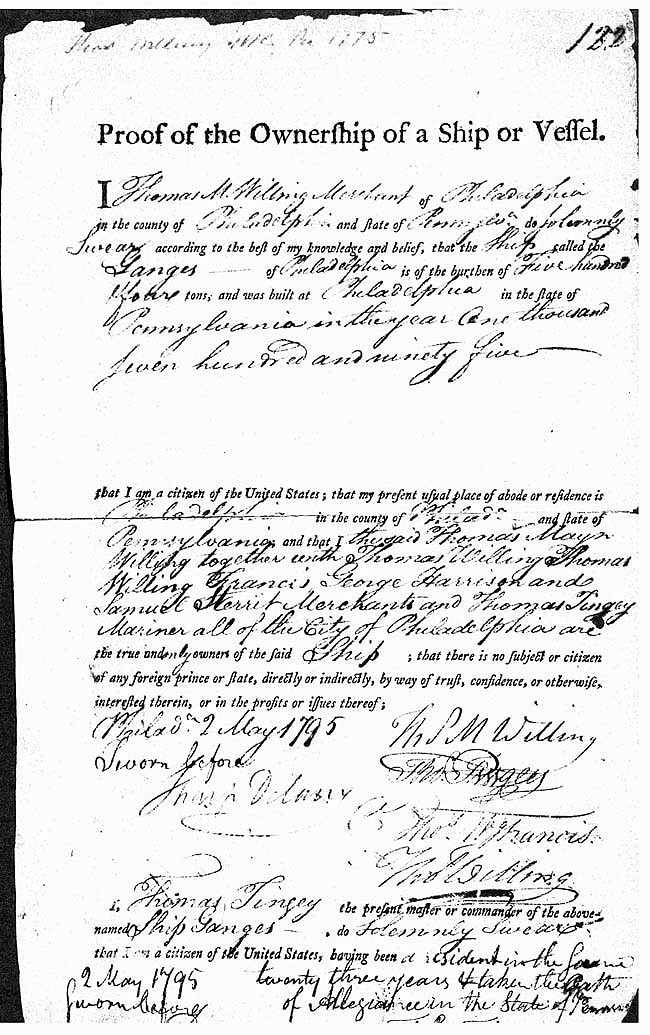 Proof of the Ownership of a Ship or Vessel.
I Thomas M. Willing Merchant of Philadelphia
in the county of Philadelphia and state of Pennsylvania do solemnly
Swear according to the best of my knowledge and belief, that the ship called the
Ganges of Philadelphia is of the burthen of five hundred
[and] four tons, and was built at Philadelphia in the state of
Pennsylvania in the year one thousand
seven hundred and ninety five.

that I am a citizen of the United States; that my present usual place of abode or residence is
Philadelphia in the county of Philadelphia and state of
Pennsylvania; and that I the said Thomas May[]
Willing together with Thomas Willing, Thomas
Willing Francis, George Harrison and
Samuel Sterrit Merchants and Thomas Tingey
Mariner all of the city of Philadelphia are
the true and only owners of the said ship; that there is no subject or citizen
of any foreign prince or state, directly or indirectly, by way of trust, confidence, or otherwise,
interested therein, or in the profits or issues thereof;
[]2 May 1795 Tho[ma]s M Willing
Sworn before Tho[ma]s Tingey
[]Delany
Tho[ma]s W Francis
Tho[ma]s Willing
I, Thomas Tingey the present master or commander of the above
named ship Ganges, do solemnly swear
that I am a citizen of the United States,
having been a resident in the [] 2 May 1795 twenty three years [and] take the oath of Allegiance in the state of Penns[ylvania]
sworn before Delong Tho[ma]s Tingey 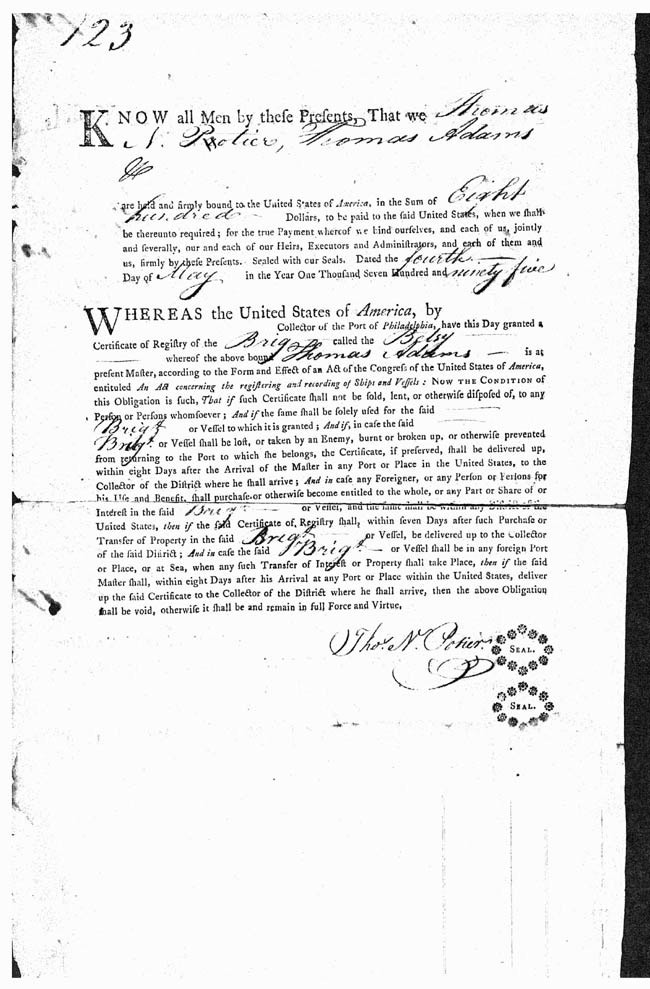 [Page 2]
Know all men by there presents, that we Thomas
N. Potier, Thomas Adams
[]

are held and firmly bound to the United States of America, in the sum of eight
hundred dollars, to be paid to the said United States, when we shall
be thereunto required; for the true Payment whereof we bind ourselves, and each of us jointly
Day of May in the Year One Thousand Seven Hundred and ninety-five

Whereas the United States of America, by
Collector of the Port of Philadelphia, have this Day granted a
Certificate of Registry of the Brig called the Betsy
whereof the above bound Thomas Addams is at
present Master, according to the Form and Effect of an Act of the Congress of the United States of America,
entitled An Act concerning the registering and recording of Ships and Vessels: Now the Condition of
this Obligation is such, that if such certificate shall not be sold, lent, or otherwise disposed of, to any
person, or persons whomever; and if the same shall be solely used for the said
Brigs or vessel to which it is granted; and if, in case the said
Brig or vessel shall be sold, or taken enemy, burnt or broken up, or otherwise prevented
from returning to the Port to which she belongs, the Certificate, if preserved, shall be delivered up,
within eight days after the arrival of the master in any port or place in the United States, to the
collector of the draft where he shall arrive; and in case any foreigner, or any person or persons for
his use and benefit shall purchase or otherwise become entitled to the whole, or any part or share or
interest in the said Brig or vessel, and the same shall bewithin any District of the
United States, then if the said Certificate of Registry shall, within seven days after such purchase or
transfer of property in the said Brig or vessel, be delivered up to the Collector
of the said district; and in case of the said Brig or vessel shall be in any foreign port
or place, or at sea, when any such transfer of interest or property shall take place, then if the said
master shall, within eight days after his arrival at any port or place within the United States, deliver
up the said Certificate to the Collector of the District where he shall arrive, then the above Obligation
shall be void, otherwise it shall be and remain in full force and virtue.