All the materials in the Rear Admiral Endicott Collection are held in the Navy Department Library’s Historic Manuscript Collection, except the Civil Engineer Appointment Letter and the Commissioning Letter, which are held in the library’s ZB (biography) files.

We thank James Parks for his generous donation of this collection.

Biographical Sketch: Rear Admiral Mordecai T. Endicott was the first Civil Engineer Corps Officer to head the Bureau of Yards and Docks (1898–1907). He served on the Nicaragua Canal Commission and on the second Isthmian Canal Commission, which was tasked with overseeing construction of the Panama Canal in April 1905. Rear Admiral Endicott served in the US Navy from 13 Jul 1874 until his permanent retirement on 30 Jun 1920. He died in Washington, DC, on 5 March 1926 and was buried in Arlington National Cemetery.

Scope and Content: The Navy Department Library holds Rear Admiral Endicott’s Civil Engineer Appointment Letter; his Commissioning Letter; photographs; letters from well-wishers upon his illness in September 1924; a phonograph recording of the Council for Inter-American Security Anti-Panama Canal Treaty Radio Announcements; a pamphlet from a Celebration of an Event in Engineering, reprinting addresses delivered at dinner to Endicott, 21 May 1898; and an Awards Log he kept for his officers. The library holds the Awards Log for last names beginning with A–O. The whereabouts of the remainder of the alphabet is unknown. 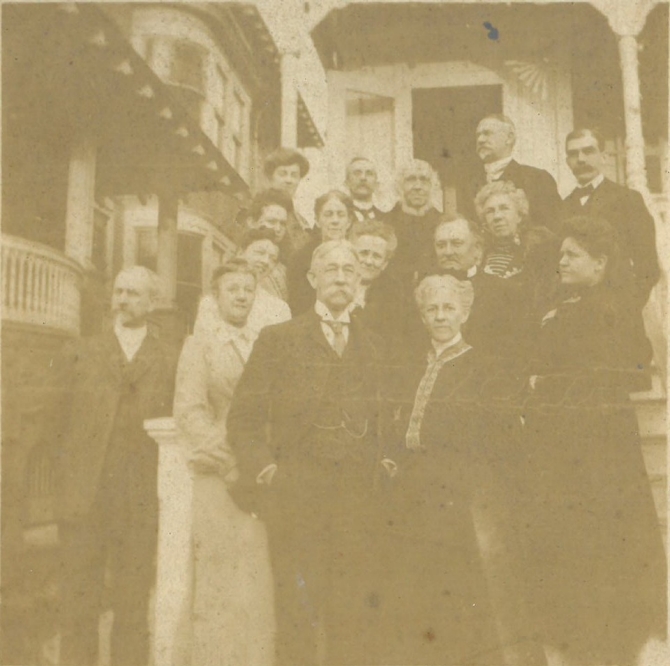 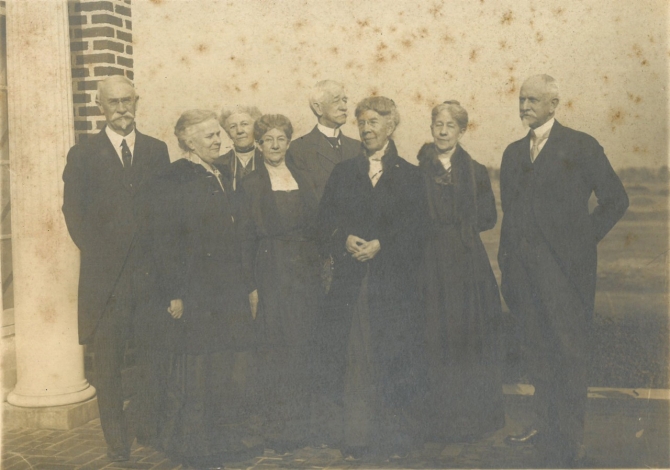 Rear Admiral Endicott (back center) with an unknown group. 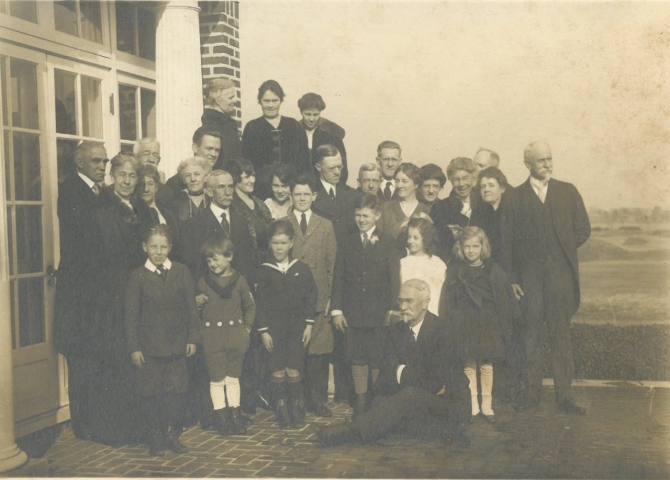 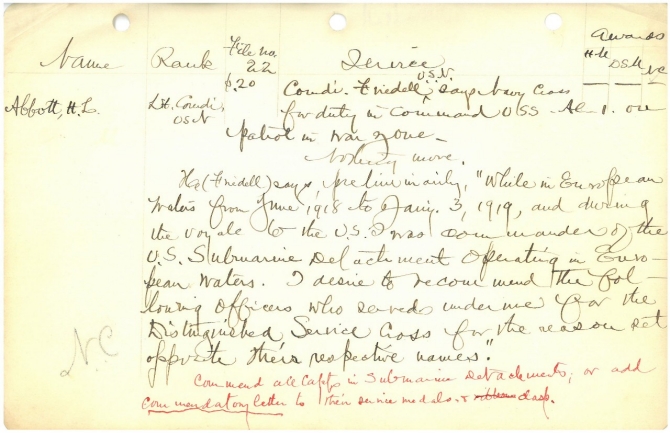 Transcription of Rear Admiral Endicott’s Officer Awards Log, Page 1: Name. Abbot, H.L. Rank. Lt. Cmdr. [Commander], USN. File no. 22. 0.20. Service. Cmdr [Commander] Friedell, USN, says Navy Cross for duty in command USS [illegible] on patrol in war zone [illegible]. He (Friedell) says, preliminarily, “While in European Waters from June 1918 to Janu’y [January] 3, 1919, and during the voyage to the U.S. I was Commander of the U.S. Submarine Detachment operating in European Waters. I desire to recommend the following officers who served under me for the Distinguished Service Cross for the reasons set opposite their respective names.” [In red ink] Commend all Capts in Submarine Detachments, or add commendatory letter to their service records [illegible]. [At left side in pencil] NC. [Right side column headers] Awards HL [?]. DSM. NC. 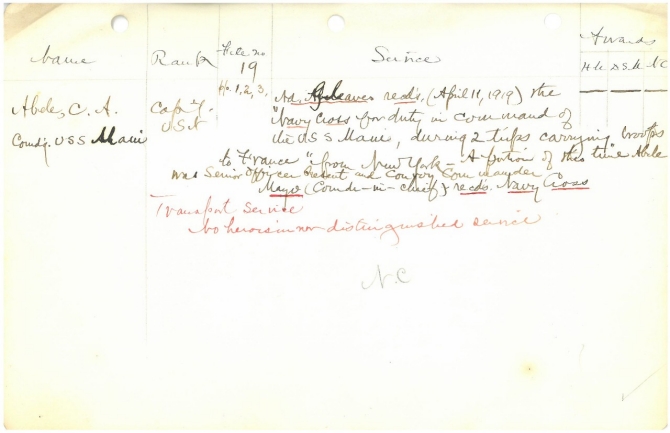 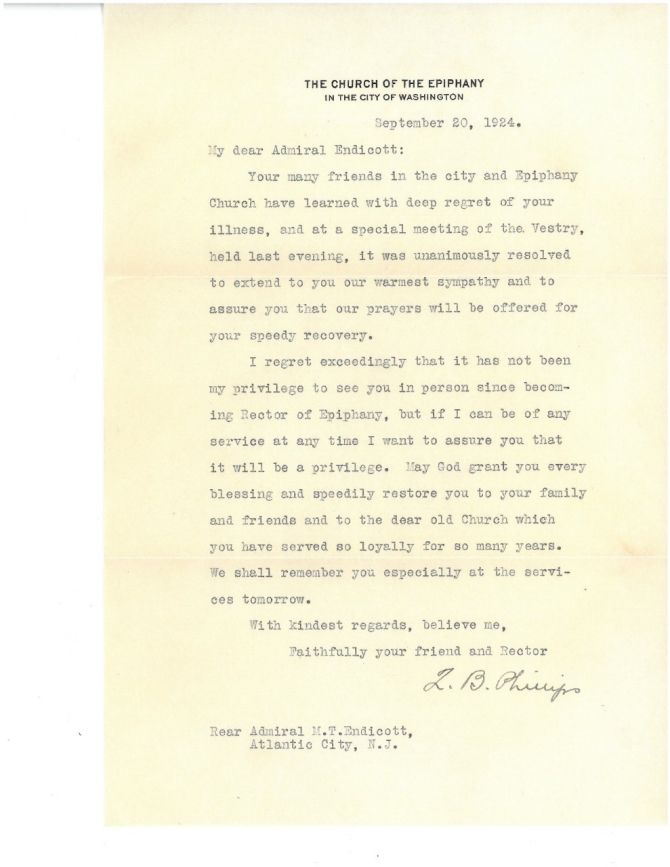 The Church of the Epiphany

In the city of Washington

Your many friends in the city and Epiphany Church have learned with deep regret of your illness, and at a special meeting of the Vestry, held last evening, it was unanimously resolved to extend to you our warmest sympathy and to assure you that our prayers will be offered for your speedy recovery.

I regret exceedingly that it has not been my privilege to see you in person since becoming Rector of Epiphany, but if I can be of any service at any time I want to assure you that it will be a privilege. May God grant you every blessing and speedily restore you to your family and friends and to the dear old Church which you have served so loyally for so many years. We shall remember you especially at the service tomorrow.

With kindest regards, believe me,

Faithfully your friend and Rector, 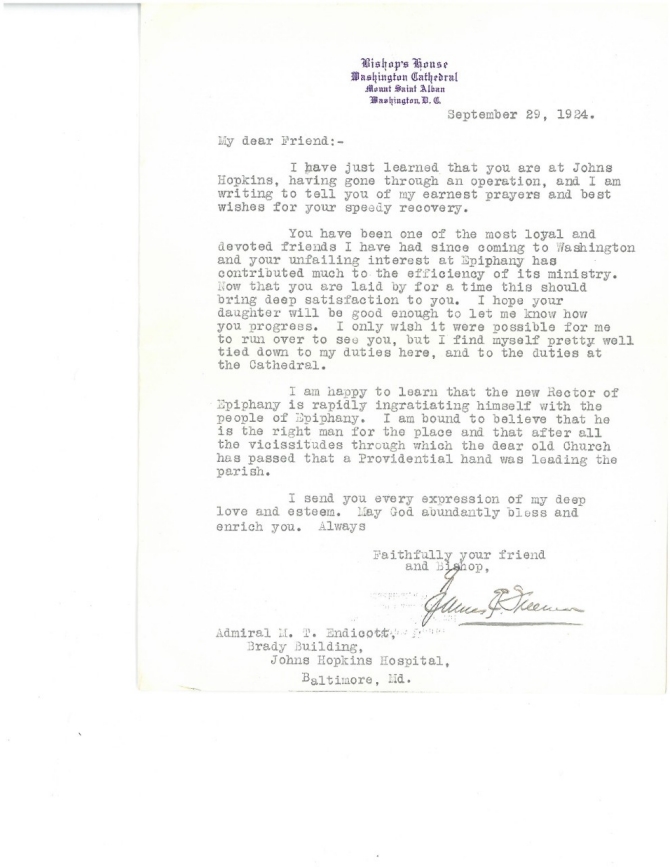 Transcription of Letter from Bishop to Rear Admiral Endicott, 29 September 1924:

I have just learned that you are at Johns Hopkins, having gone through an operation, and I am writing to tell you of my earnest prayers and best wishes for your speedy recovery.

You have been one of the most loyal and devoted friends I have had since coming to Washington and your unfailing interest at Epiphany has contributed much to the efficiency of its ministry. Now that you are laid by for a time this should bring deep satisfaction to you. I hope your daughter will be good enough to let me know how you progress. I only wish it were possible for me to run over to see you, but I find myself pretty well tied down to my duties here, and to the duties at the Cathedral.

I am happy to learn that the new Rector of Epiphany is rapidly ingratiating himself with the people of Epiphany. I am bound to believe that he is the right man for the place and that after all the vicissitudes through which the dear old Church has passed that a Providential hand was leading the parish.

I send you every expression of my deep love and esteem. May God abundantly bless and enrich you. Always 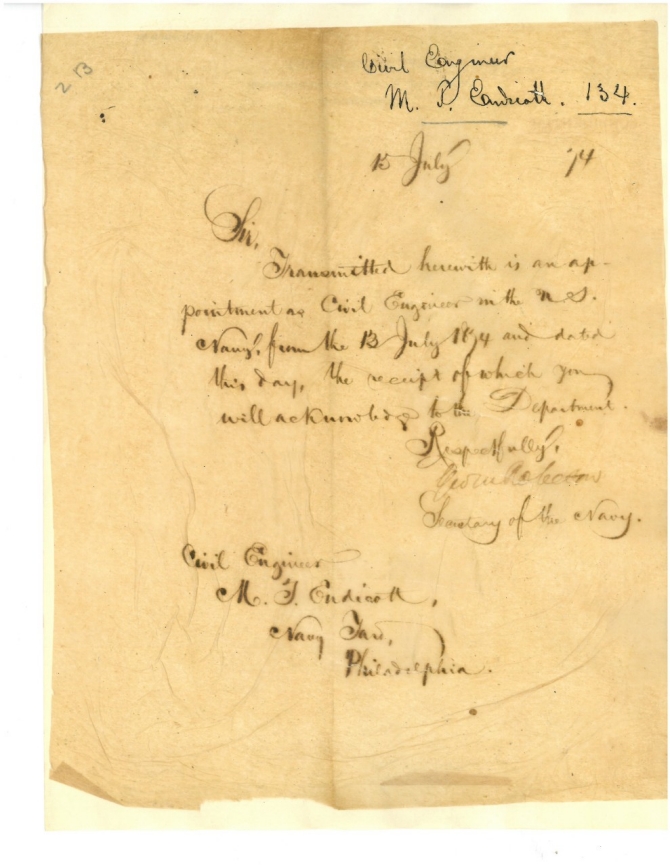 Transmitted herewith is an appointment as Civil Engineer in the U.S. Navy from the 13 July 1874 and dated this day, the receipt of which you will acknowledge to the Department. 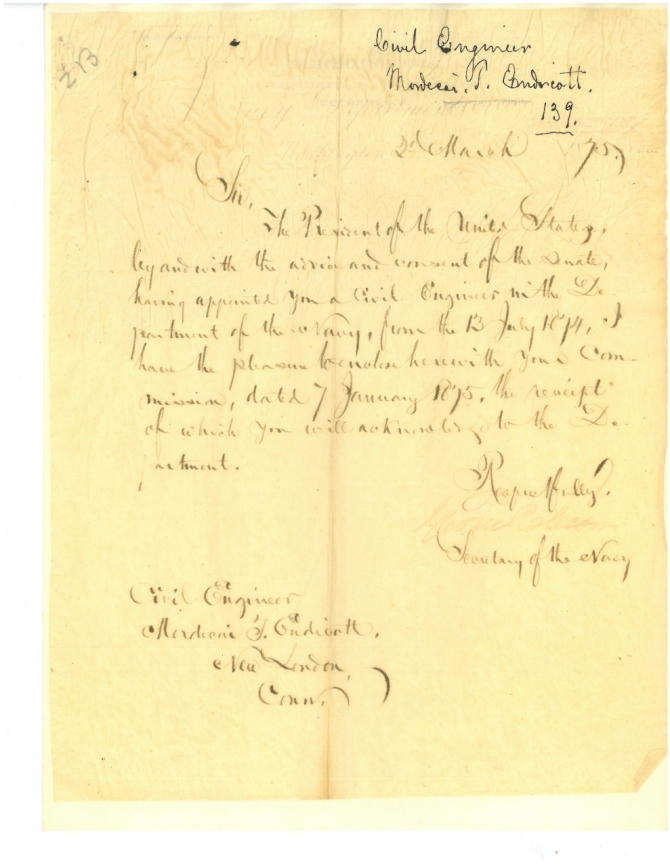 The President of the United States, by and with the advice and consent of the Senate, having appointed you a Civil Engineer with the Department of the Navy, from the 13 July 1874, I have the pleasure to enclose herewith your Commission, dated 7 January 1875, the receipt of which you will acknowledge to the Department.