The Nathaniel B. Hinckley Family Collection is held in the Navy Department Library's Historic Manuscripts Collection.

We thank Commander Robert M. Hinckley for his generous donation of this collection.

Biographical Sketch: Nathaniel Bent Hinckley was born on 21 February 1843 in Milton, Massachusetts. He began his career on merchant ships and was appointed Acting Master’s Mate in the US Navy on 7 March 1864. While serving on board Rodolph (Gunboat No. 48), he participated in operations in Mobile Bay leading to the surrender of Fort Morgan, where he carried the Confederate flag from the fort. Rodolph was sunk on 1 April 1865, after which Hinckley transferred to the wooden screw tug Pink. He remained with Pink until the end of the war and resigned on 17 May 1865 as a Master’s Mate. He then returned to commercial sea service, visiting Japan and doing substantial work in China and Hong Kong. He later became a public accountant and retired in 1925.

Scope and Content: The Hinckley Family Collection consists mainly of documents relating to Nathaniel B. Hinckley and his service on commercial and Navy ships during the 1800s. It also contains items relating to Hinckley’s grandfather and son, both named Robert Hinckley. The following items are in the collection:

4. Journal and Navigation Log of Captain Robert Hinckley while aboard Galen from 16 June 1803.

12. Letter of 13 November 1936 from F.S. Lowe regarding Civil War Medal of Nathaniel B. Hinckley.

13. Letter of 12 December 1862 regarding Nathaniel B. Hinckley’s qualification for Master’s Mate.

14. “An Act for the relief and protection of American Seamen” certificate for Nathaniel B. Hinckley, 15 Jan 1862.

15. Orders of 1 March 1864 for Nathaniel B. Hinckley to report to Rear Admiral Stringham at Boston for examination as to qualifications for Acting Master’s Mate. Signed by Secretary of the Navy Gideon Welles.

16. Orders of 18 March 1864 for Nathaniel B. Hinckley to report for duty to Admiral Farragut.

17. Orders of 20 January 1865 from USS Rodolph for Nathaniel B. Hinckley to provide evidence at the court-martial of Acting Third Assistant Engineer Levi Robbins.

18. Orders of 4 April 1865 for Nathaniel B. Hinckley to detach from USS Rodolph and report to USS Pink.

19. Orders of 26 July 1864 for Nathaniel B. Hinckley to detach from USS Portsmouth and report to USS Rodolph.

20. Orders of 17 May 1865 accepting Nathaniel B. Hinckely’s resignation from the US Navy. 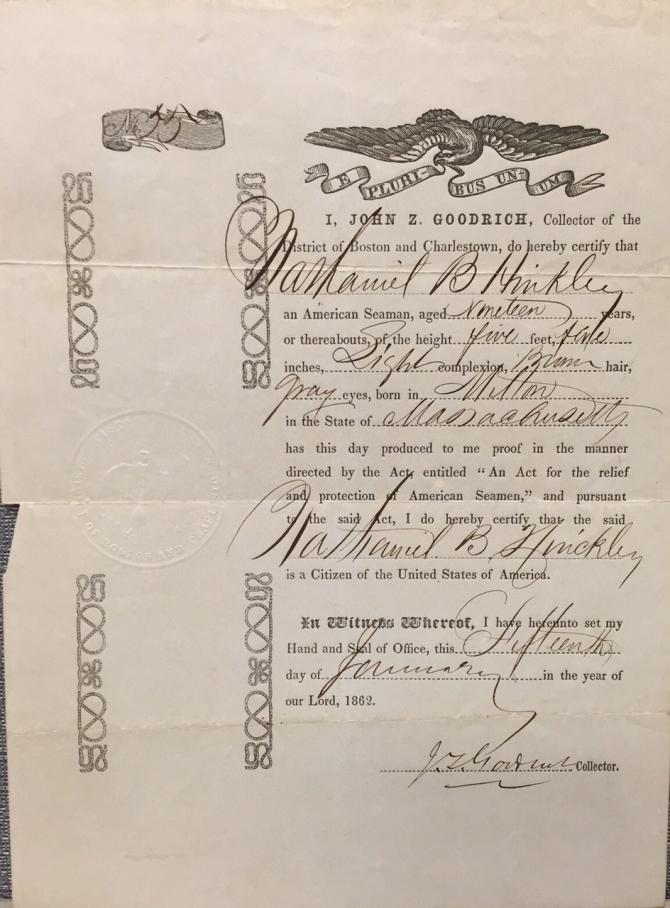 Transcription of “An Act for the relief and protection of American Seamen” certificate for Nathaniel B. Hinckley, 15 Jan 1862: [Certificates like this one were necessary to protect US citizen seamen from being pressed into the service of the British Navy.] I, John Z. Goodrich, Collector of the District of Boston and Charlestown, do hereby certify that Nathaniel B. Hinckley an American Seaman, aged nineteen years, or thereabouts, of the height five feet, five inches, light complexion, brown hair, gray eyes, born in Milton in the State of Massachusetts has this day produced to me proof in the manner directed by the Act, entitled “An Act for the relief and protection of  American Seamen,” and pursuant to the said Act, I do hereby certify that the said Nathaniel B. Hinckley is a citizen of the United States of America.

In Witness Whereof, I have hereunto set my Hand and Seal of Office, this fifteenth day of January in the year of our Lord, 1862. 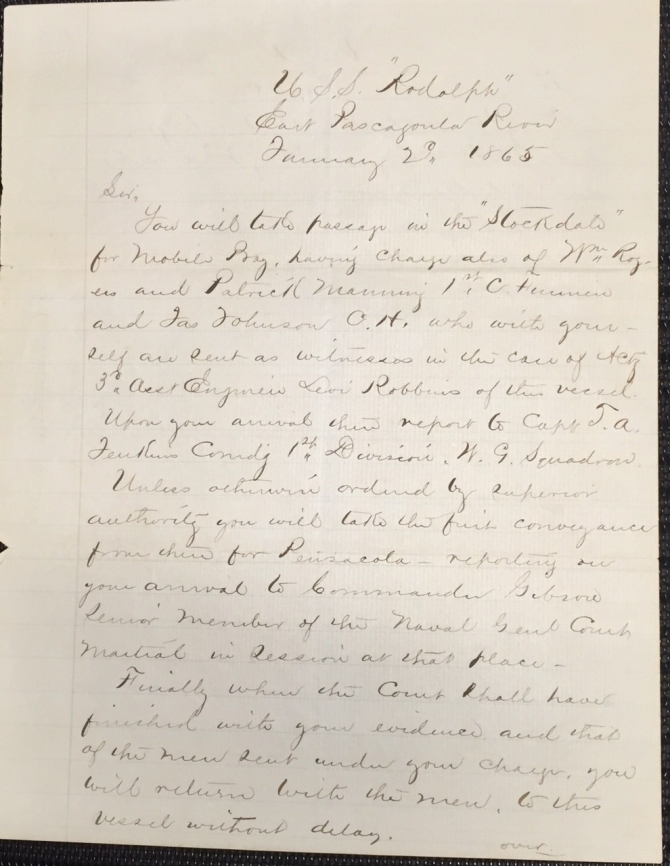 Transcription of Orders of 20 January 1865 from USS Rodolph for Nathaniel B. Hinckley to provide evidence at the court-martial of Acting Third Assistant Engineer Levi Robbins, page 1:

You will take passage in the “Stockdale” for Mobile Bay, having charge also of Wm [William] Rogers and Patrick Manning 1st C. [class] [illegible] and Jas Johnson [illegible] who with yourself are sent as witnesses in the case of Actg [acting] 3rd Asst [assistant] Engineer Levi Robbins of this vessel. When you arrive there report to Capt. [illegible] Comdg [commanding] 1st Division, [illegible] Squadron.

Finally when the Court shall have finished with your evidence and that of the men sent under your charge, you will return with the men to this vessel without delay. Over. 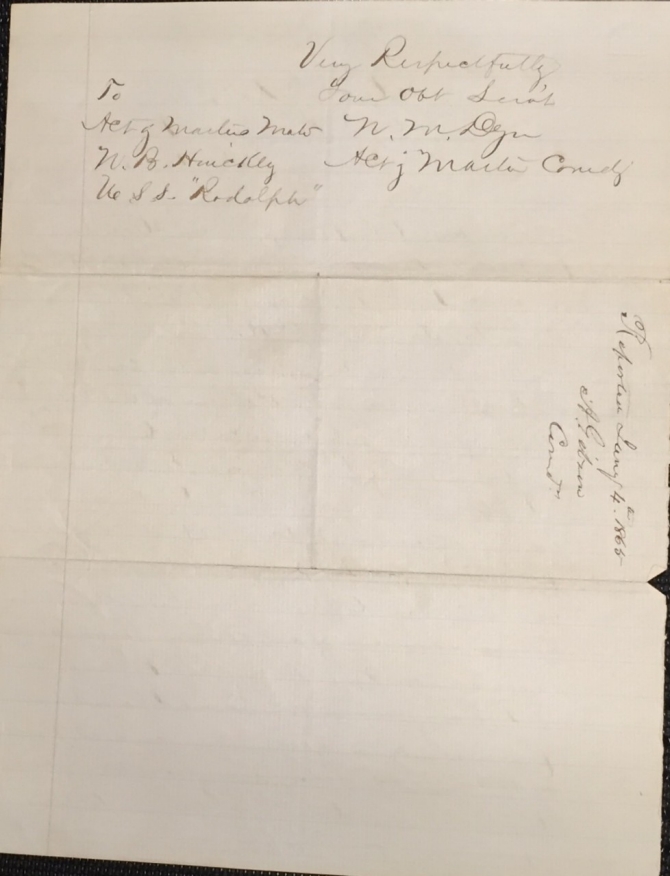 Transcription of Orders of 20 January 1865 from USS Rodolph for Nathaniel B. Hinckley to provide evidence at the court-martial of Acting Third Assistant Engineer Levi Robbins, page 2: