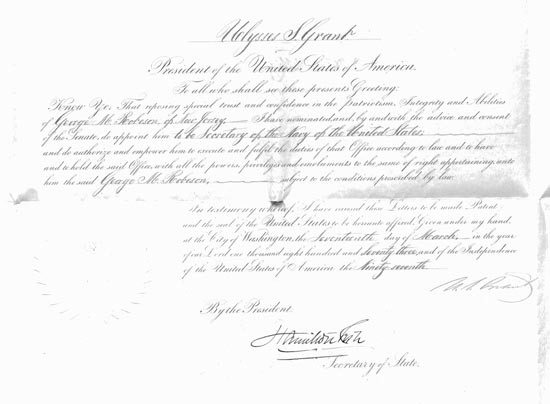 President of the United States of America
To all who shall see these presents Greeting:

Know Ye; That reposing special trust and confidence in the Patriotism, Integrity and Abilities of George M Robeson of New Jersey, I have nominated, and, by and with the advice and consent of the Senate, do appoint him to be Secretary of the Navy of the United States; and do authorize and empower him to execute and fulfill the duties of that Office according to law and to have and to hold the said Office, with all the powers, privileges and emoluments to the same of right appertaining, unto him the said George M. Robeson, subject to the conditions prescribed by law.

In testimony whereof, I have caused these Letters to be made Patent and the seal of the United States to be hereunto affixed. Given under my hand, at the City of Washington, the Seventeenth day of March, in the year of our Lord one thousand eight hundred and Seventy-three, and of the Independence of the United States of America the Ninety-seventh.
(Signed) U. S. Grant

By the President
(Signed) Hamilton Fish
Secretary of State.