An Inventory of His Papers at the Navy Department Library

Henry C. Mustin was born in Philadelphia, Pennsylvania on 6 February 1874 and graduated from the US Naval Academy in 1896. He spent the two years at sea then required by law before he was commissioned an ensign in 1898. From then, until he reported to duty in aviation fifteen years later, he distinguished himself as a remarkably capable officer in the surface Navy.

After receiving his commission, Mustin served during the next eighteen months on board six different vessels. In December 1899, he assumed command of the USS Samar, a gun boat on the Asiatic station. While commanding the USS Samar, during the capture of Vigan, Philippines, Mustin won a commendation for towing the boats of the battleship USS Oregon to shore and aiding in covering the landing.

Aside from his early work in ship operations, Mustin was busy with the technical aspects of ordnance. His work resulted in a telescopic sight that would aid in increasing the accuracy and range of naval gun fire.

Mustin made his first flight while on duty at the Philadelphia Navy Yard. In January 1911, he aided Holden Richardson in an experiment with a glider, which Richardson designed and built. Lt Mustin soloed on 13 March 1913 and was designated Navy Air Pilot No. 3 on 6 January 1914. He received the designation as Naval Aviator No. 11 when Secretary of the Navy Josephus Daniels initiated Naval Aviator status in 1915.

In April 1914 USS Mississippi, with Lieutenant Commander Mustin in command as Acting Captain, sailed for Vera Cruz carrying an aviation detachment for operations in the Mexican Campaign. The airplanes assigned to Mississippi operated daily for forty-three consecutive days marking the first operational use of naval aircraft. Mississippi was relieved by North Carolina as Station Ship at Pensacola in July 1914. Lieutenant Commander Mustin served as that ship's executive officer and sailed in her to European waters, with an aviation unit of four planes aboard, to look after American interests following the outbreak of World War I.

In December 1919, Commander Mustin assumed command of Aroostook with additional duty as commander of the Fleet Air Detachment, Pacific Fleet. While in command of the Fleet Air Detachment, later designated the Aircraft Squadrons, Pacific Fleet, Mustin led a flight of a dozen airplanes on a record breaking 3,019 mile flight from San Diego, California, to Balboa, Panama. Mustin was ordered to report to the Navy department for duty as Assistant Chief of the Bureau of Aeronautics in late October 1921. He reported on 6 November and was promoted to Captain on 1 January 1922.

Captain Mustin was admitted to the Naval Hospital, Washington, DC, on 17 January 1923 suffering chest pain. He died after a protracted illness on 23 August 1923.

The bulk of this collection consists of correspondence from Captain Mark L. Bristol in the Office of Naval Operations to Lt Cmdr Henry C. Mustin, US Naval Aeronautical Station, Pensacola, concerning the operations conducted at that station, Mustin's official responses to the poor fitness report written by Captain Bristol, and a series of personal letters received by Lt Cmdr and Mrs. Mustin regarding his being passed over for promotion to commander at the beginning of 1917. In addition to the correspondence, the collection contains correspondence, drawings, and patents to Mustin for various inventions concerning naval gun sights and hyrdoaeroplanes. The collection also contains Mustin's Flight Log Book during the period between 1919-1922 when Mustin was commander of the Air Detachment, Pacific Fleet and a diary of the long range flight to Balboa, which Mustin commanded between 18 December 1920 and 18 January 1821. Also included is Mustin's log book for the cruise of the USSSamar from 13 October 1899 - 3 March 1900, a small group of water color sketches, and miscellaneous ephemera. Among the later is a certificate (with photograph) from the Aero Club of America dated 10 December 1913 designating Mustin as Hydraeroplane Pilot No. 14 and a court martial pardon signed by President Theodore Roosevelt.

The collection is organized by subject matter.

- H.C. Mustin letter of 23 May 1903 [no addressee], 4-page typewritten letter,  submitting plan for a turret sight mount designed for the 13-inch turrets on the USS Kearsage.

- H. C. Mustin to Chief of the Bureau of Equipment, 27 June 1904, 5-page typewritten letter submitting a description of an electrical night signal apparatus.

- Official correspondence and documents, including earlier fitness reports, in defense of the discrepancies in Mustin's fitness report for period 1 October 1915 - 31 March 1916, during which time he was commandant of the US Navy Aeronautic Station, Pensacola.

-  Personal correspondence regarding the Section Board and Mustin's being "passed over" for promotion to commander.

- The Naval Flying Corps Monthly, Vol. 1, No. 3, March 1917, containing an article on Mustin titled "Our Ex-Commandant." 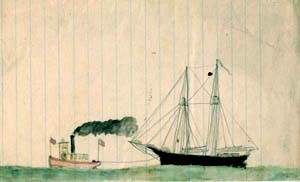 - Full and unconditional pardon for findings of court martial convened on board the USS Brooklyn for leaving his station without being regularly relieved and of sleeping on watch, dated 13 June 1902.

Manuscripts are unavailable for loan and must be consuLted in the library. Photocopying of manuscripts is generally prohibited, though the use of digital cameras by researchers to reproduce non-copyrighted materials is permitted. Permission to photocopy a limited number of pages may be granted by the reference staff, contingent upon the physical state of items. All photocopying of materials shall be done by the reference staff, or under their close supervision. The use of personal scanners by non-library staff personnel must be approved by the reference staff on a document-by-document basis (Reference: Naval History and Heritage Command Instruction [NAVHISTCENTINST] 5070.1C.).

The collection was processed and a finding aid prepared by Thomas Wildenberg in August 2007.