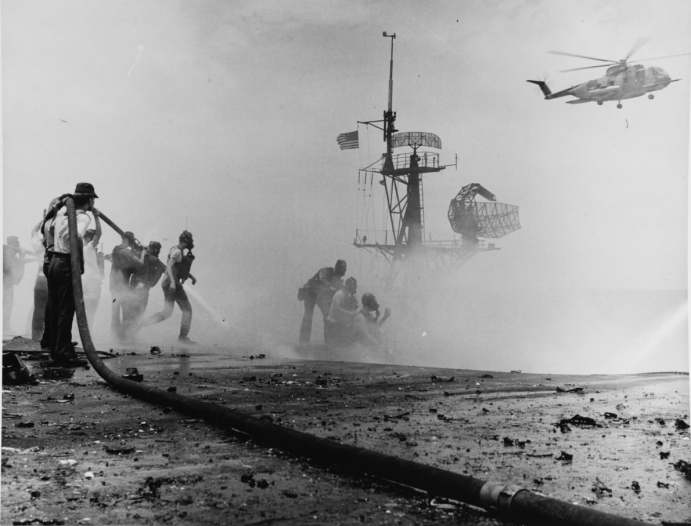 USN 1124786. Forrestal (CVA-59) crewmen are assisted by those from Rupertus (DD-851) in fighting the fires raging aboard Forrestal, while a helicopter ferries firefighting supplies to the burning ship. Download image.

On 29 July 1967, USS Forrestal (CVA/CV-59) suffered a catastrophic fire during flight operations while on Yankee Station off the coast of Vietnam. Wracked by eight high-order explosions of thin-shelled Korean War–vintage bombs and a number of smaller weapons explosions, the world’s first supercarrier was mere minutes away from the bottom of the Gulf of Tonkin. In its wake, the fire claimed 134 Sailors and Airmen, and seriously injured or burned another 161. Of those who died, 50 died where they slept. Many more were wounded but did not report their injuries because of the severity of those of their shipmates.

Forrestal was the first Atlantic Fleet carrier on Yankee Station, and she had been there only five days. As the ship prepared for its second strike of the day, at 1050, everything changed. The Navy in its definitive report on the event—Manual of the Judge Advocate General Basic Final Investigative Report Concerning the Fire on Board the USS FORRESTAL (CVA-59)—concluded that a stray electrical signal ignited the motor of a Zuni rocket carried by an F-4B Phantom II on the starboard quarter and shot across the deck, striking the external fuel tank of a fully armed A-4E Skyhawk on the port. At least one of the Skyhawk’s M-65 1,000-lb. bombs fell to the deck, cracked open, and was burning with a white-hot ferocity.

The carrier’s fire crew responded immediately. Fifty-four seconds after the initiation of the fire, Chief Gerald W. Farrier, head of the firefighting team, attacked the cracked and furiously burning bomb with a hand-held extinguisher. Twenty seconds later the hose crew arrived and fought the periphery of the fire. At slightly more than 90 seconds into the fire, the bomb exploded. Nine seconds later a second 1,000-pounder exploded with even more ferocity, hurling debris nearly 1,000 feet away at the bow.

The explosions of the large, old weapons blew holes in the armored flight deck above spaces primarily set aside for crew berthing. Flaming and unburned fuel, water, and foam cascaded down into the compartments. Battling the fires below deck was more difficult than that topside with the confined spaces, little light, thick black smoke, and toxic fumes. Although the fire on the flight deck was controlled within an hour, fires below deck raged until 0400 the next morning.

Twenty-one aircraft were destroyed and another 40 damaged of the 73 on board at the start of the fire.

Although the investigation report cited errors of safety checks on the Zuni rocket, it concluded that no one on board was directly responsible for the fire and subsequent explosions, and recommended that no disciplinary or administrative action be taken against any persons attached to the ship or its air wing.

Forrestal received emergency repairs over eight days at Subic Bay, The Philippines, before sailing for complete repair at the Norfolk Naval Shipyard in Portsmouth, Virginia. She went on to serve until 11 September 1993 when she was decommissioned after 21 deployments. She never made another Vietnam cruise.

This information was extracted from the Manual of the Judge Advocate General Basic Final Investigative Report Concerning the Fire on Board the USS FORRESTAL (CVA-59), portions of which are available from the U.S. Navy JAG online library. 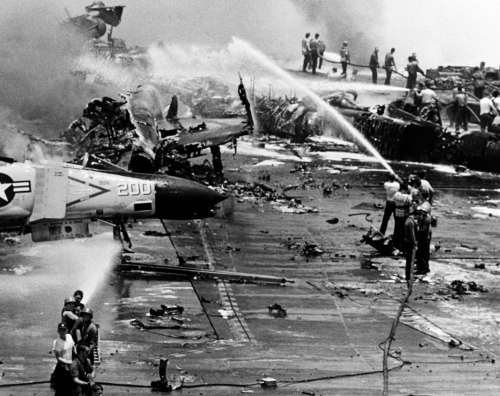 USN 1124794. USS Forrestal (CVA-59). Crew members fight a series of fires and explosions on the carrier's after flight deck, in the Gulf of Tonkin, 29 July 1967. The conflagration took place as heavily-armed and fueled aircraft were being prepared for combat missions over North Vietnam. Official U.S. Navy Photograph. Download image.

Legacy: All Sailors Are Firefighters

USS Forrestal—Trial by Fire
The Sextant blog post by Chief Damage Controlman (SW/AW) Teddy Yates discussing the tragedy and the impact of the fire.

Trial by Fire
A motivational film for Navy personnel on the prevention of fire and for learning firefighting damage control measures.

All Hands Update: Remembering the 1967 USS Forrestal Fire
Video providing overview of the event that changed how the Navy trains for firefighting and response. 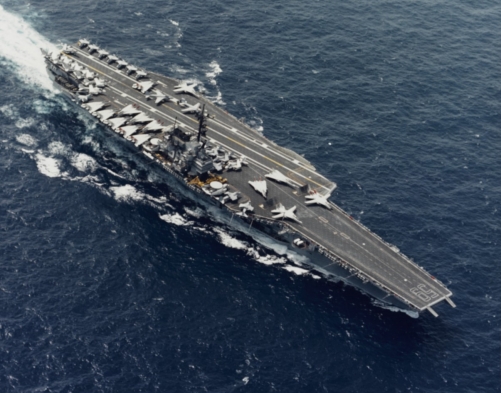