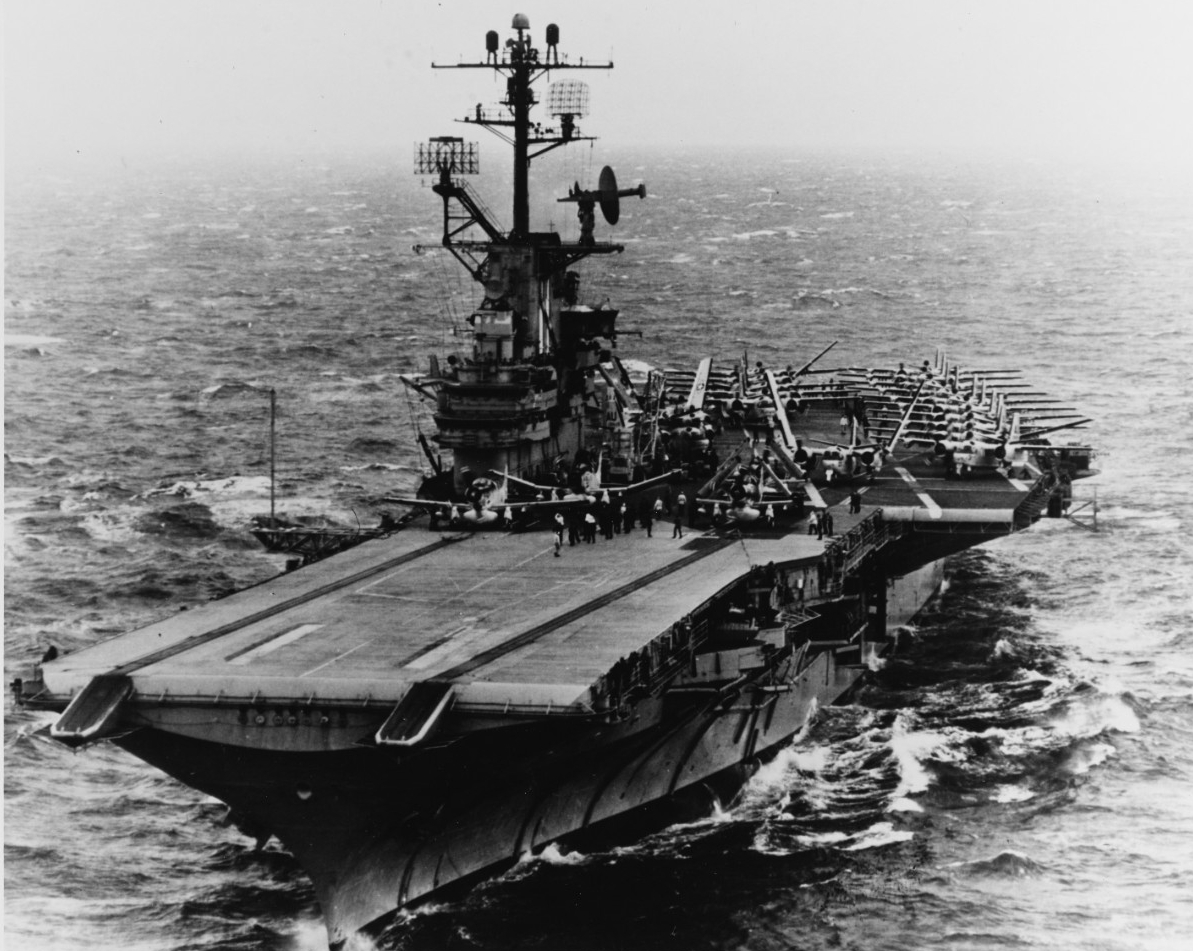 Essex-class aircraft carrier USS Intrepid (CV-11) was commissioned on 16 August 1943 at the Newport News Shipbuilding and Dry Dock Company, Virginia, with Captain Thomas L. Sprague in command. After shakedown training in the Caribbean, Intrepid returned to Virginia, briefly, before she steamed to the U.S. west coast ultimately arriving at Pearl Harbor on 10 January 1944, where she prepared for the invasion of the Marshall Islands—the U.S. Navy’s next objective in its World War II island-hopping campaign across the Pacific. On 16 January, Intrepid, in company with carriers USS Cabot (CVL-28) and USS Essex (CV-9), departed Hawaii to raid the islands at the northeastern corner of the Kwajalein Atoll, 29 January, and pressed the attack until the last enemy opposition had vanished a few days later. The assault destroyed all of the more than 80 Japanese aircraft based on Roi and Namur before the first landings were made on adjacent islets. On 31 January, Intrepid’s aircraft bombarded Ennuebing Island until the first Marines reached the beaches. Later in the morning, that islet, which protected Roi's southwestern flank and controlled the northern pass into Kwajalein Lagoon, was secured, enabling Marines to set up artillery. After the Marshalls campaign, Intrepid steamed for Truk—a Japanese base in the center of Micronesia. On 17 February, three fast carrier groups, to include Intrepid, arrived in the area of operations undetected and proceeded to destroy two enemy destroyers and more than 200,000 tons of merchant shipping over the course of two days of non-stop attacks. During the assault, an aerial torpedo struck Intrepid 15-feet below her waterline that flooded several compartments and jammed her rudder hard to port. The ship returned to Pearl Harbor on 24 February for temporary repairs, and ultimately, Intrepid made way to the Hunter’s Point Naval Shipyard, California, where she underwent permanent repairs that would bring her back to the fight.

On 9 June, Intrepid departed the California coast for Pearl Harbor, where she operated for the next few months before she made way back to the Marshalls. On 6–7 September, Intrepid’s aircraft struck Japanese positions in the Palaus, concentrating the attacks on airfields and artillery emplacements on Peleliu. Following the attacks, Intrepid, as part of a fast carrier task force, steamed west toward the southern Philippines where they struck airfields on Mindanao for the next few days. On 17 September, Intrepid returned to Peleliu to provide air support for the Marines, who had landed on the island two days earlier. Once the battle ended, which included overcoming fanatical opposition from hillside caves and mangrove swamps, Intrepid steamed back to the Philippines. She struck throughout the Philippines, also pounding Okinawa and Formosa, to neutralize Japanese air threats to her ultimate destination—Leyte Gulf.

On the morning of 24 October, Intrepid’s aircraft spotted Japanese Admiral Takeo Kurita’s flagship, super-battleship Yamato, and two hours later, aircraft from Intrepid and Cabot began to attack the enemy force. Wave after wave followed until by sunset American carrier-based aircraft had sunk battleship Musashi, with her mammoth 18-inch guns, and had damaged Yamato, along with battleships Nagato and Haruna, and heavy cruiser Myoko. Later that evening, Admiral William F. Halsey’s Third Fleet raced to intercept Japan’s northern force. The following morning, aircraft were deployed to attack Japanese ships off Cape Engano in the Philippines. As the fighting commenced, one of Intrepid’s aircraft scored a hit into the bowels of light carrier Zuiho. Then, American bombers sank her sister ship Chitosi, and another aircraft scored a torpedo hit on Zuikaku that knocked out the enemy carrier’s communications and hampered her steering. Destroyer Ayitsuki was sent below the waves and at least nine of Ozawa's 15 aircraft were shot down. Throughout the day, the attacks continued, and after five more strikes, Japan lost four carriers and a destroyer during the battle. In addition, Leyte was no longer a strategic threat to the Allies.

Halsey’s task force next set its sights on the Japanese center force that had pushed through San Bernardino Strait and had steamed south along the coast of Samar. The Japanese force was ultimately held at bay by an escort carrier group of six “baby flattops,” three destroyers, and four destroyer escorts until help arrived to send the enemy fleeing in defeat back towards Japan. On 30 October, as Intrepid’s aircraft hit Clark Field that had been captured by the Japanese in early 1942, a burning kamikaze crashed into one of Intrepid’s port gun tubs killing 10 of the crew and wounding another six. Swift damage control, on part of Intrepid’s crew, enabled the flattop to resume flight operations in the Philippines. On 25 November, shortly after noon, a heavy force of Japanese aircraft struck back at the task force, and within minutes, two kamikazes crashed into Intrepid, killing 65 of the crew. Intrepid never lost propulsion nor left her station with the task force, and in less than two hours, had extinguished the last blaze. The next day, Intrepid steamed to San Francisco, arriving on 20 December for repairs.

In early 1945, Intrepid was back in the hunt as she steamed for Ulithi, arriving 13 March. The following day, Intrepid pushed eastward for strikes against airfields on Kyushu, Japan. On 19 March, a twin-engine Japanese kamikaze “Betty” broke through a curtain of defensive fire, turned toward Intrepid and exploded only 50 feet off the aircraft carriers forward boat crane. A shower of flaming gasoline and plane parts started fires on the hangar deck—Intrepid’s damage control team quickly snuffed out the flames. Subsequently, Intrepid’s aircraft joined the attacks on remnants of the Japanese fleet that were anchored, damaging 16 enemy naval vessels including Yamato and carrier Amagi.

After the assault, the Allies turned their attention to the most ambitious amphibious assault of the Pacific war, Okinawa. On 26–27 March, American aircraft carriers struck Ryukyus to “soften up the battlefield.” Then, on 1 April, as the invasion began, they flew support missions against targets on the embattled island and made neutralizing raids against Japanese airfields. During a raid on 16 April, a Japanese plane dove into Intrepid’s flight deck, killing eight of the crew and wounding another 21. In less than an hour, the flaming gasoline was extinguished, and only three hours after the crash, aircraft were again landing on Intrepid. The following day, Intrepid was underway for the U.S. west coast, arriving in San Francisco on 19 May for repairs.

Intrepid stood out of San Francisco on 29 June and enlivened her westward voyage on 6 August as her aircraft smashed the Japanese on bypassed Wake Island. The next day, she arrived Eniwetok, where she received word on 15 August to “cease offensive operations.” The carrier was underway on 21 August to support the occupation of Japan. She departed Yokosuka on 2 December after Japan’s surrender and arrived at San Pedro, California, on 15 December. She later steamed to San Francisco where her status was reduced to “in commission in reserve” on 15 August 1946 before she was decommissioned on 22 March 1947.

On 9 February 1952, Intrepid was recommissioned and was underway for Norfolk, Virginia, where she was decommissioned again on 9 April for conversion to a modern attack aircraft carrier. On 1 October, Intrepid was reclassified CVA-11 and recommissioned, where she remained in reserve until June 1954. On 13 October, Intrepid became the first carrier in history to launch aircraft with American-built steam catapults. Two days later, Intrepid went into full commission and joined the Atlantic Fleet. For the next several years, Intrepid participated in several NATO exercises, operated mostly in the Mediterranean, and underwent modernization to support her new role as an antisubmarine warfare support carrier, CVS-11.

In 1962, Intrepid was tapped as the principal ship in the recovery of astronaut Malcolm S. Carpenter and his Project Mercury space capsule. On 24 May, Carpenter splashed down in Aurora 7 several hundred miles from Intrepid. Minutes after he was located, two helicopters from Intrepid, carrying NASA officials, medical experts, Navy frogmen, and photographers, were airborne and headed to the rescue. One of the helicopters picked him up over an hour later and flew him to the carrier, which later safely returned him to the United States. In 1965, Intrepid repeated her work with NASA when on 23 March, Lieutenant Commander John W. Young and Major Virgil I. Grissom splashed down some 50 miles from Intrepid. An Intrepid helicopter lifted the astronauts from the Gemini 3 capsule and flew them to Intrepid for medical examination and debriefing. Later, Intrepid retrieved the capsule and returned it and the astronauts to Cape Kennedy, Florida. After the mission, Intrepid entered New York’s Brooklyn Navy Yard for overhaul.

From April 1966 to February 1969, Intrepid deployed three times in support of the Vietnam War. Notably, during the 1966 deployment, Intrepid’s naval aviators dealt powerful blows to the enemy and achieved what is believed to be one of the fastest aircraft launching times recorded by an American carrier. Nine A-4 Skyhawks and six A-l Skyraiders, loaded with bombs and rockets, were catapulted in just seven minutes, with only a 28-second interval between launches. A few days later, aircraft were launched at 26-second intervals.

On 15 March 1974, Intrepid was decommissioned for the last time. Originally, the seasoned aircraft carrier was scheduled to be scrapped, however, a campaign to save the ship as a museum was successful. Today, Intrepid is berthed on the Hudson River as the centerpiece of the Intrepid Sea, Air and Space Museum. 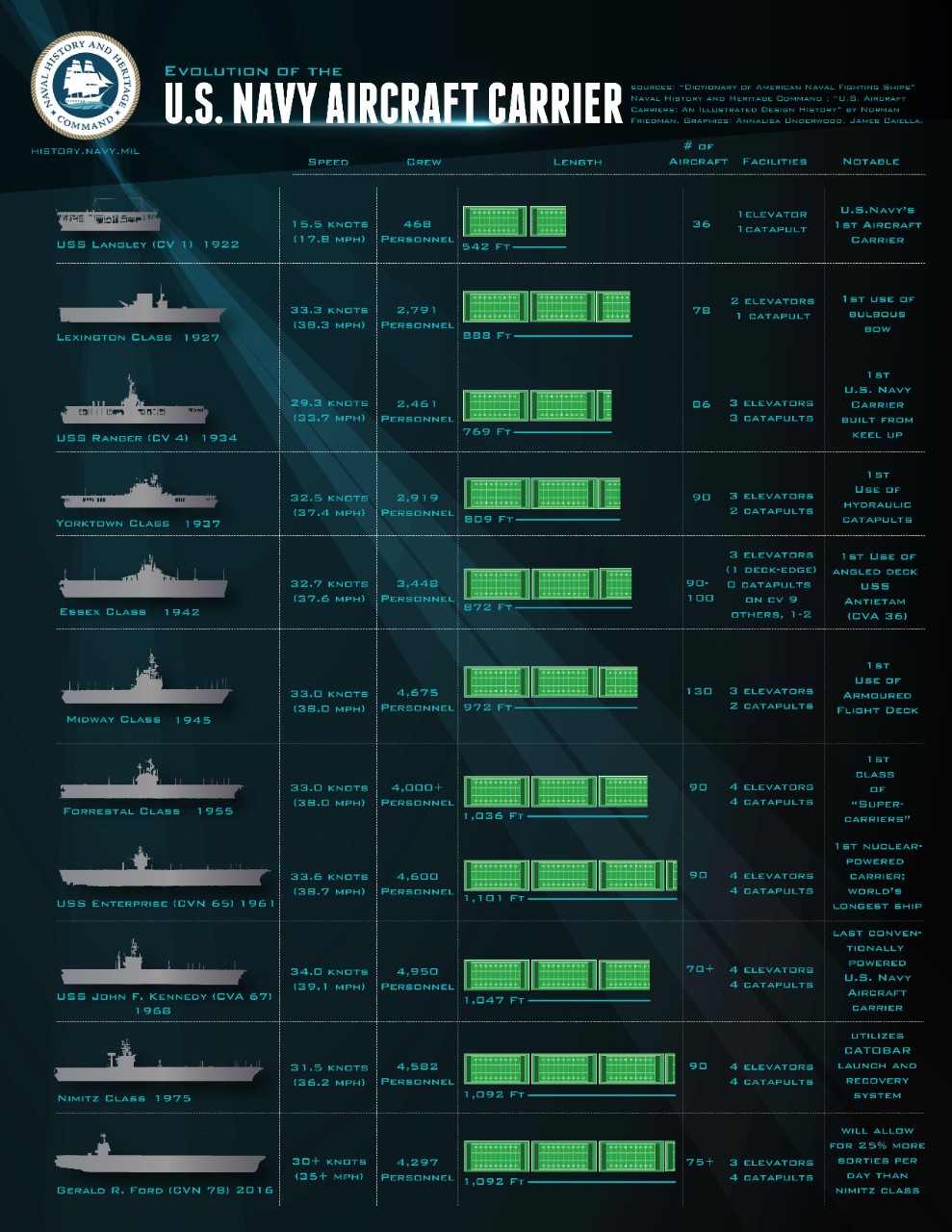 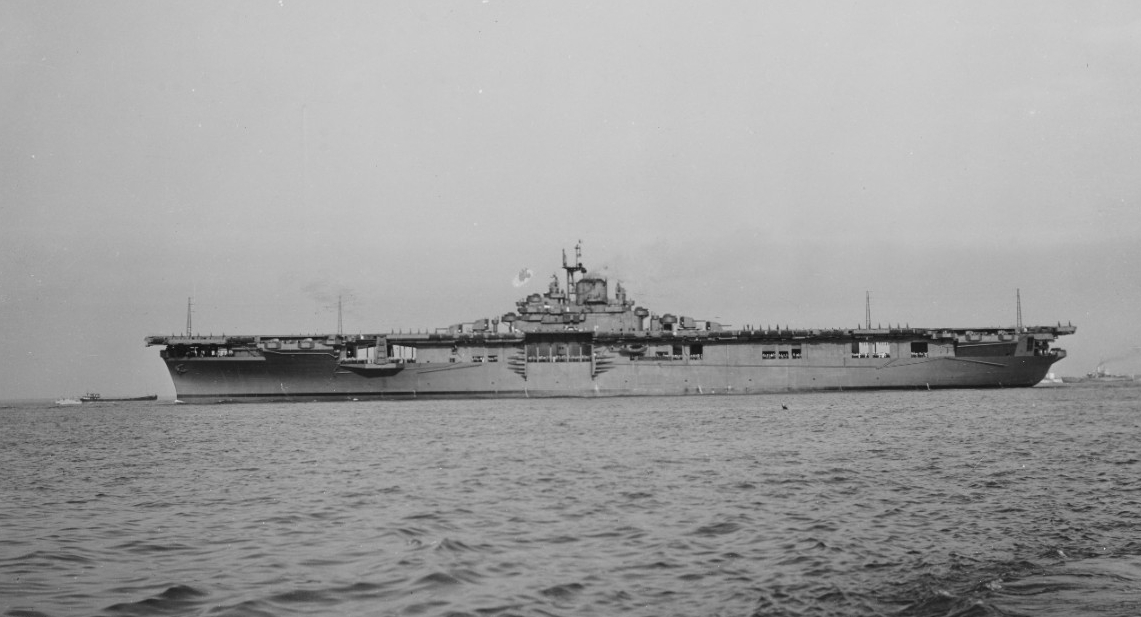 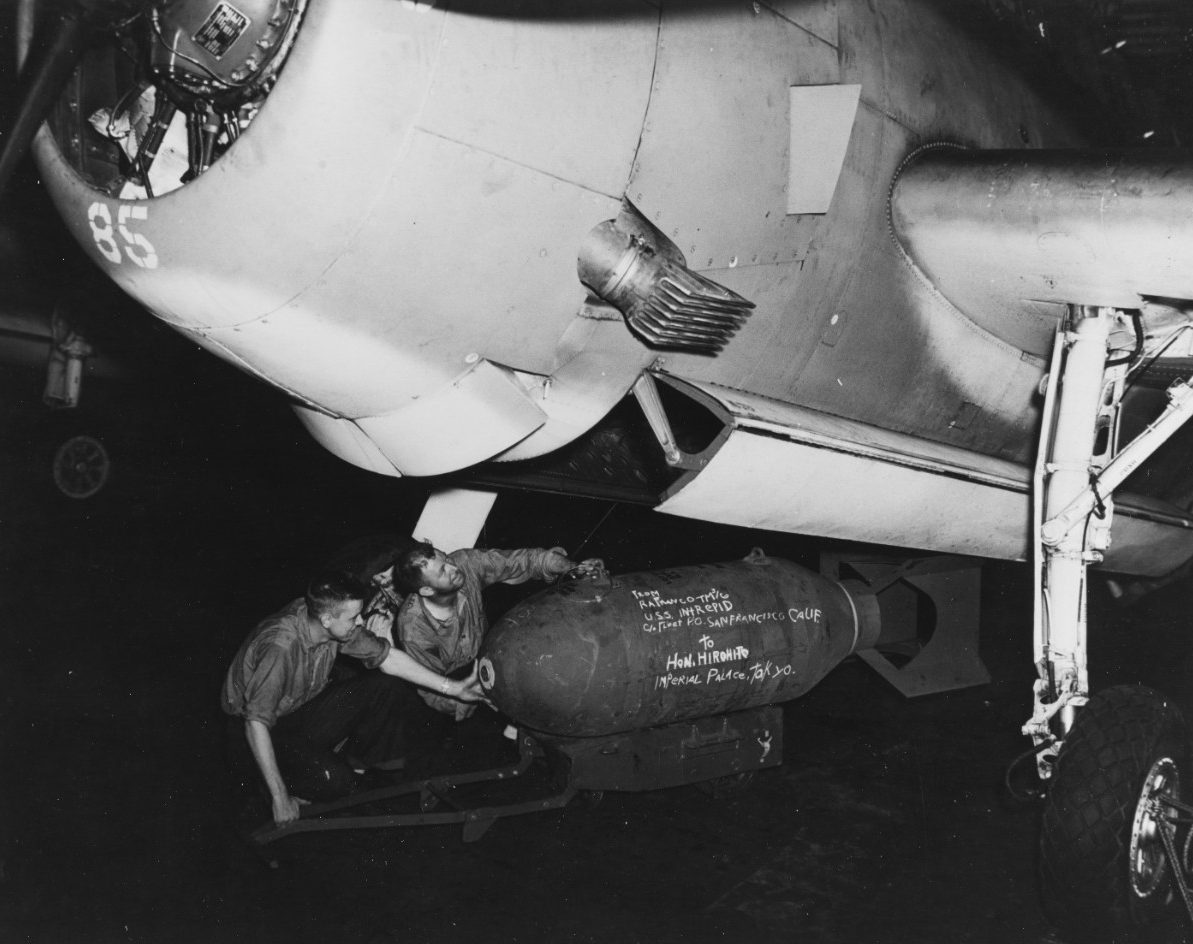 USS Intrepid (CV-11) crewmembers prepared to load a 2,000-pound general-purpose bomb in the bomb bay of a TBM Avenger, 27 January 1944. The carrier was en route to support the invasion of Roi and Namur Islands, Kwajalein Atoll. National Archives photograph, 80-G-227134. 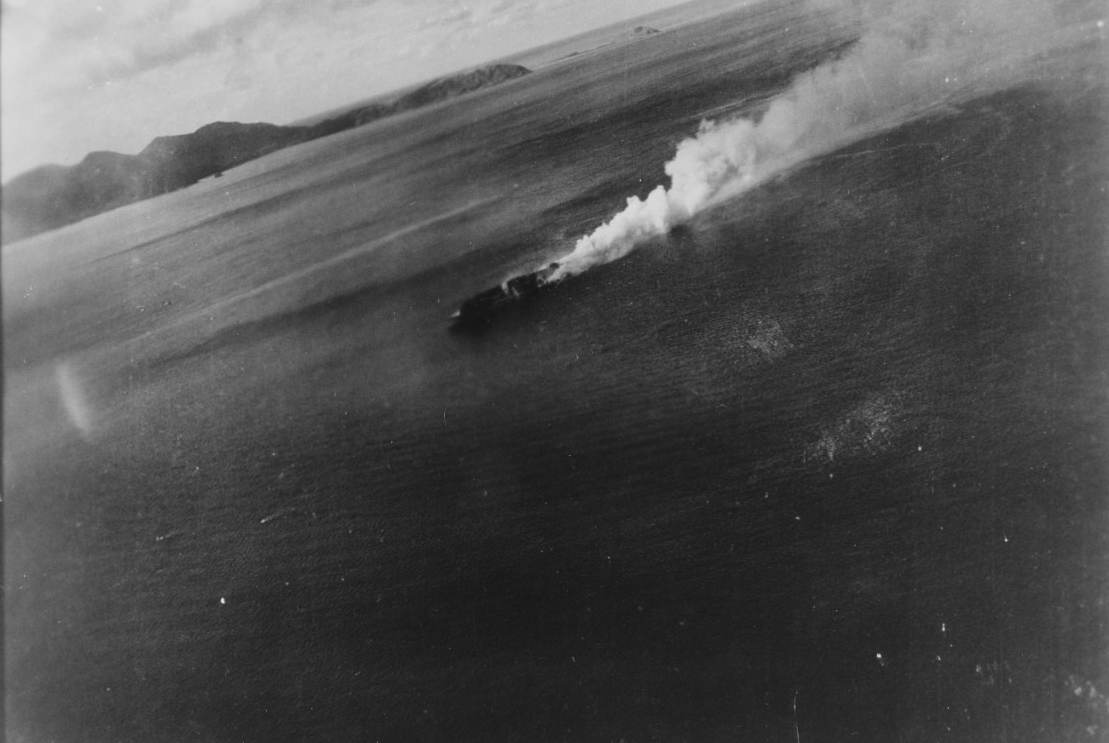 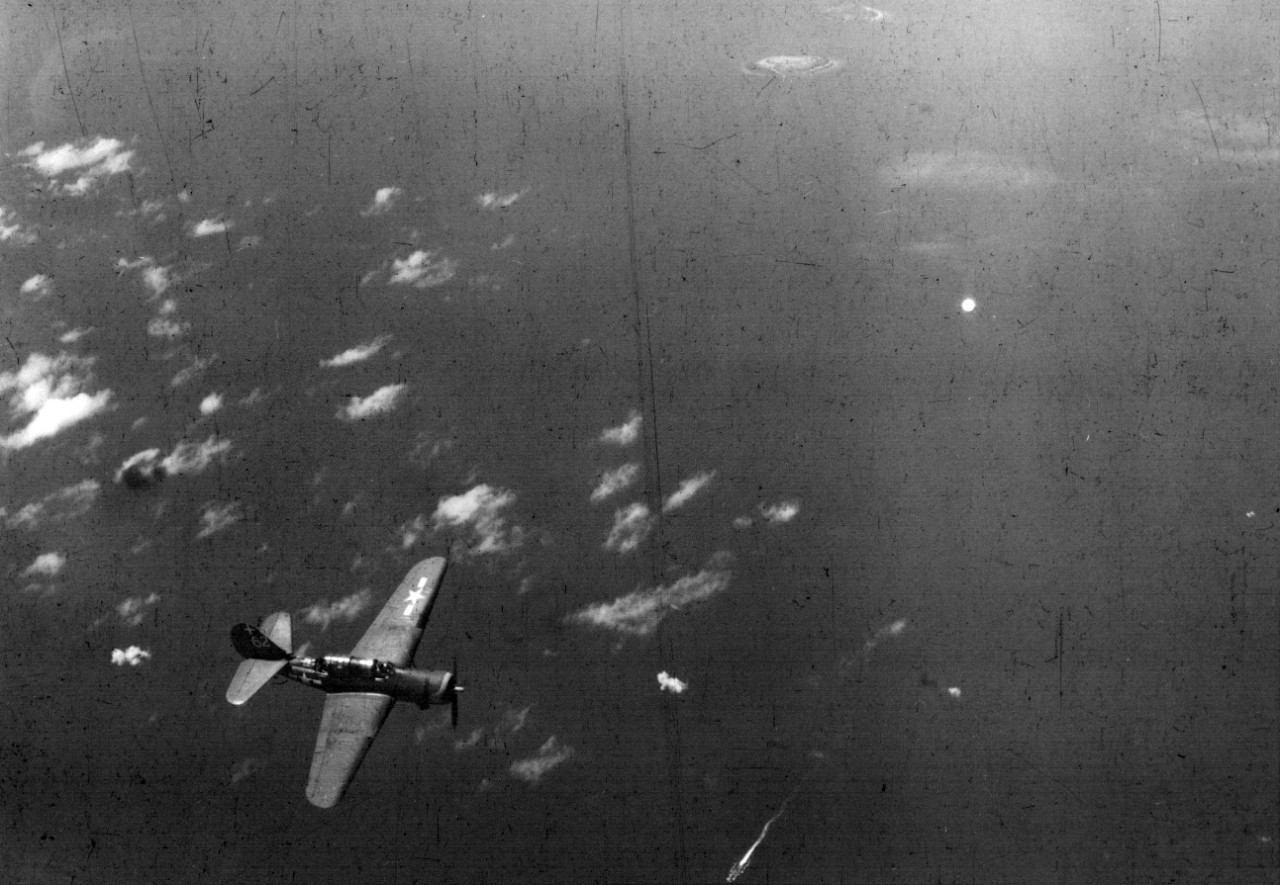 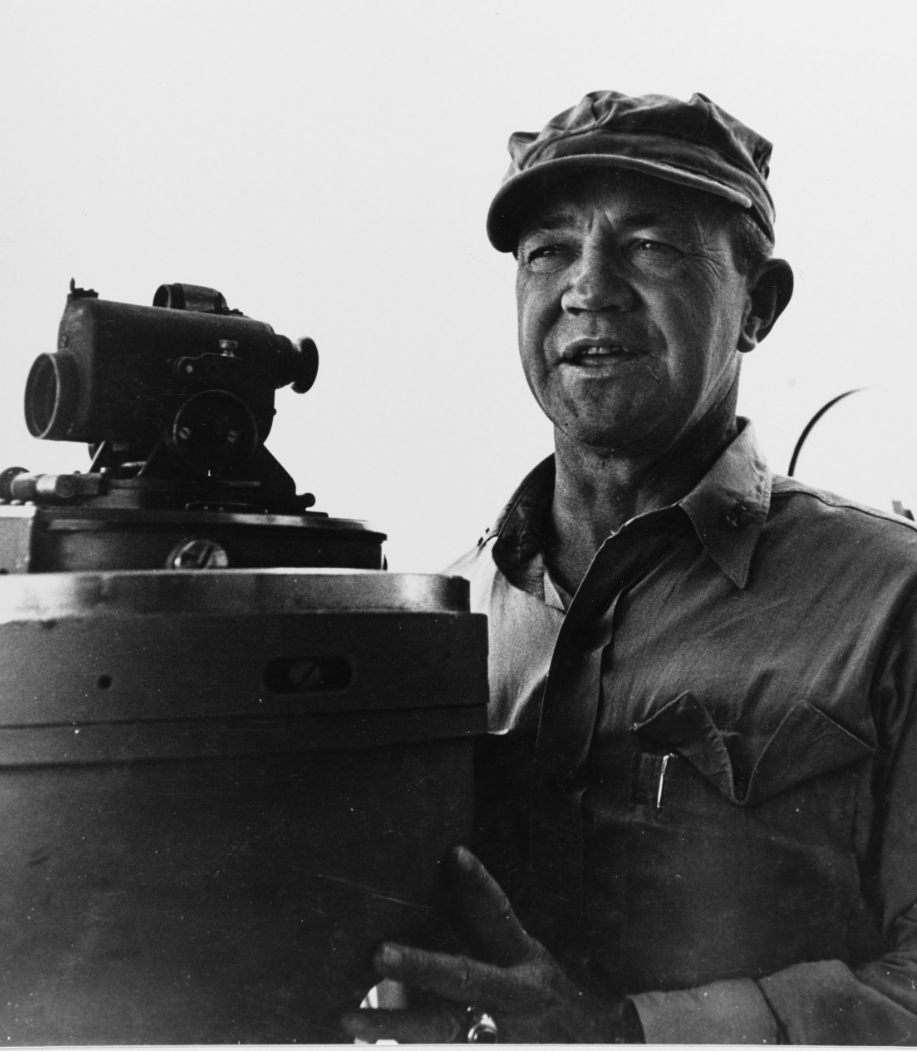 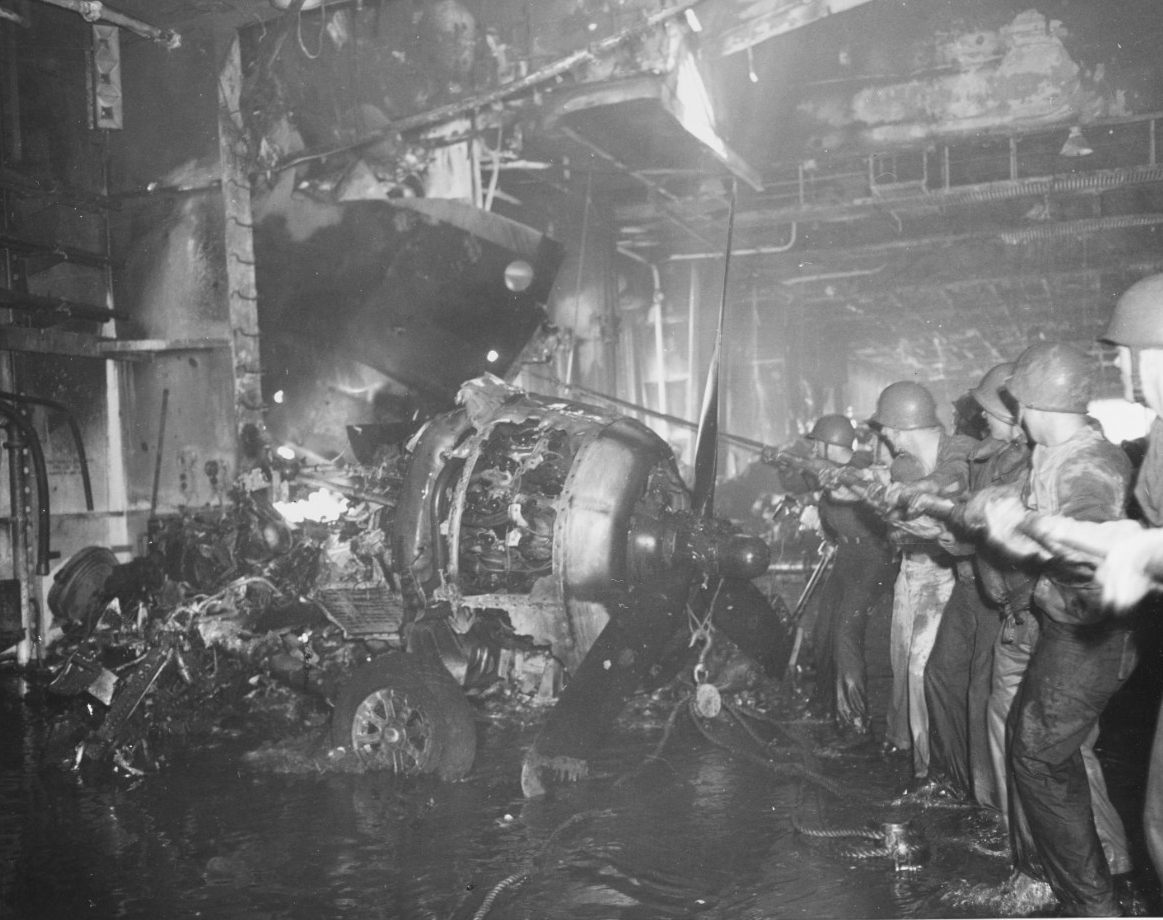 USS Intrepid (CV-11) crewmembers cleared away wreckage in the hangar deck after the ship was hit by kamikazes off the Philippines, 25 November 1944. National Archives photograph, 80-G-270840. 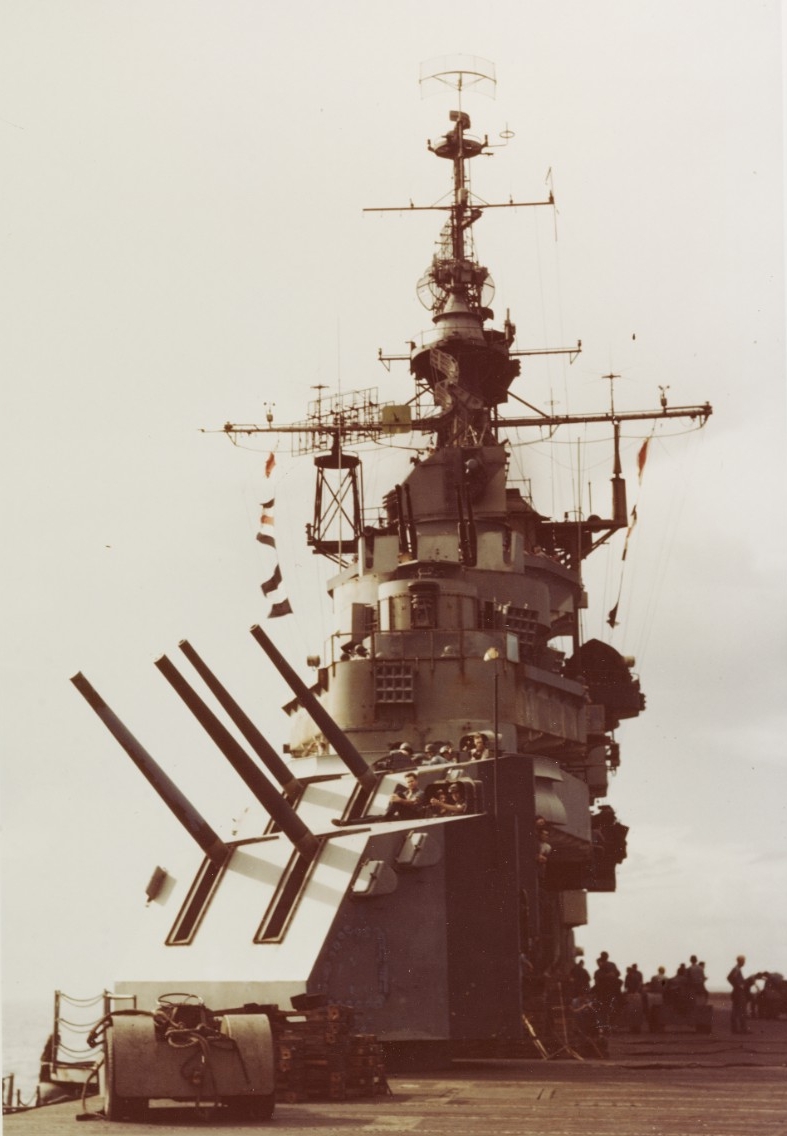 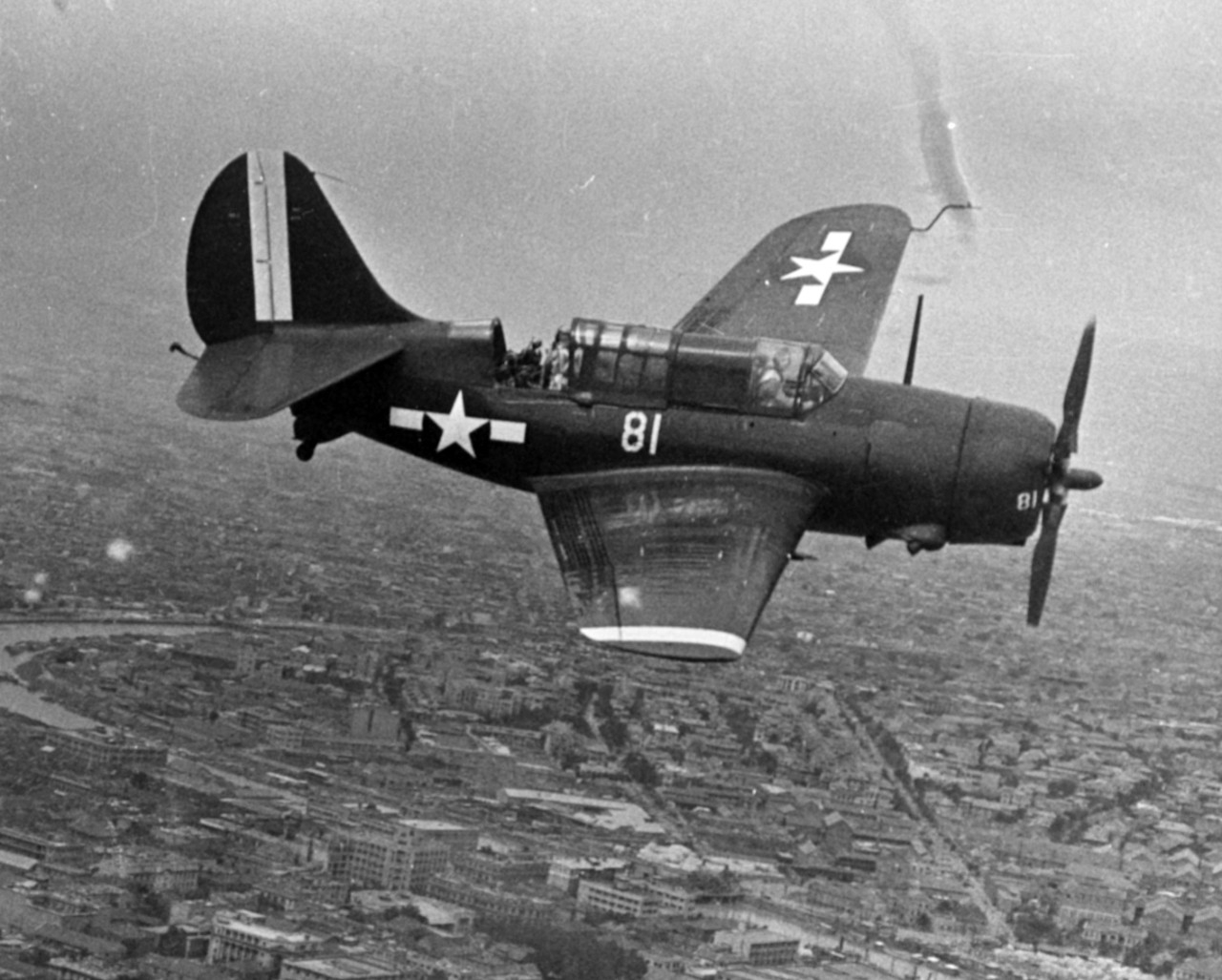 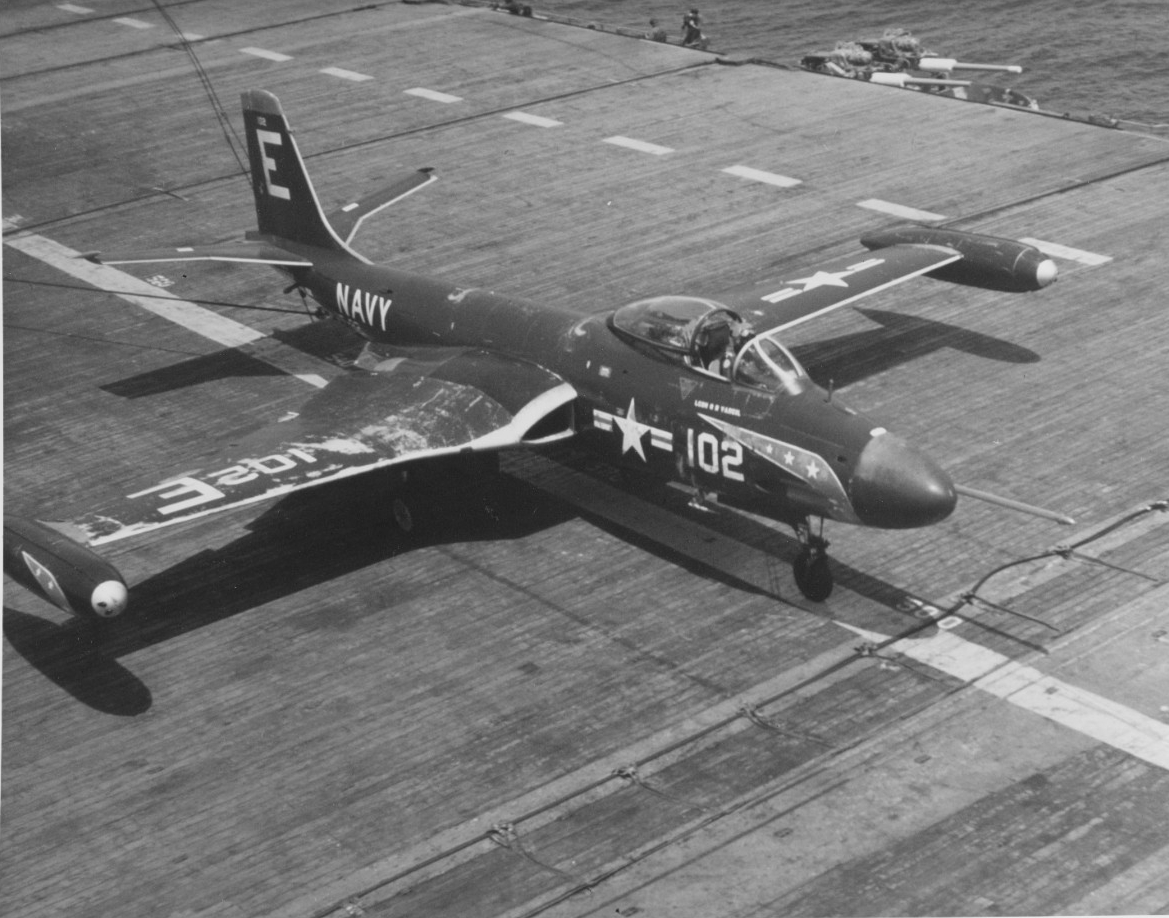 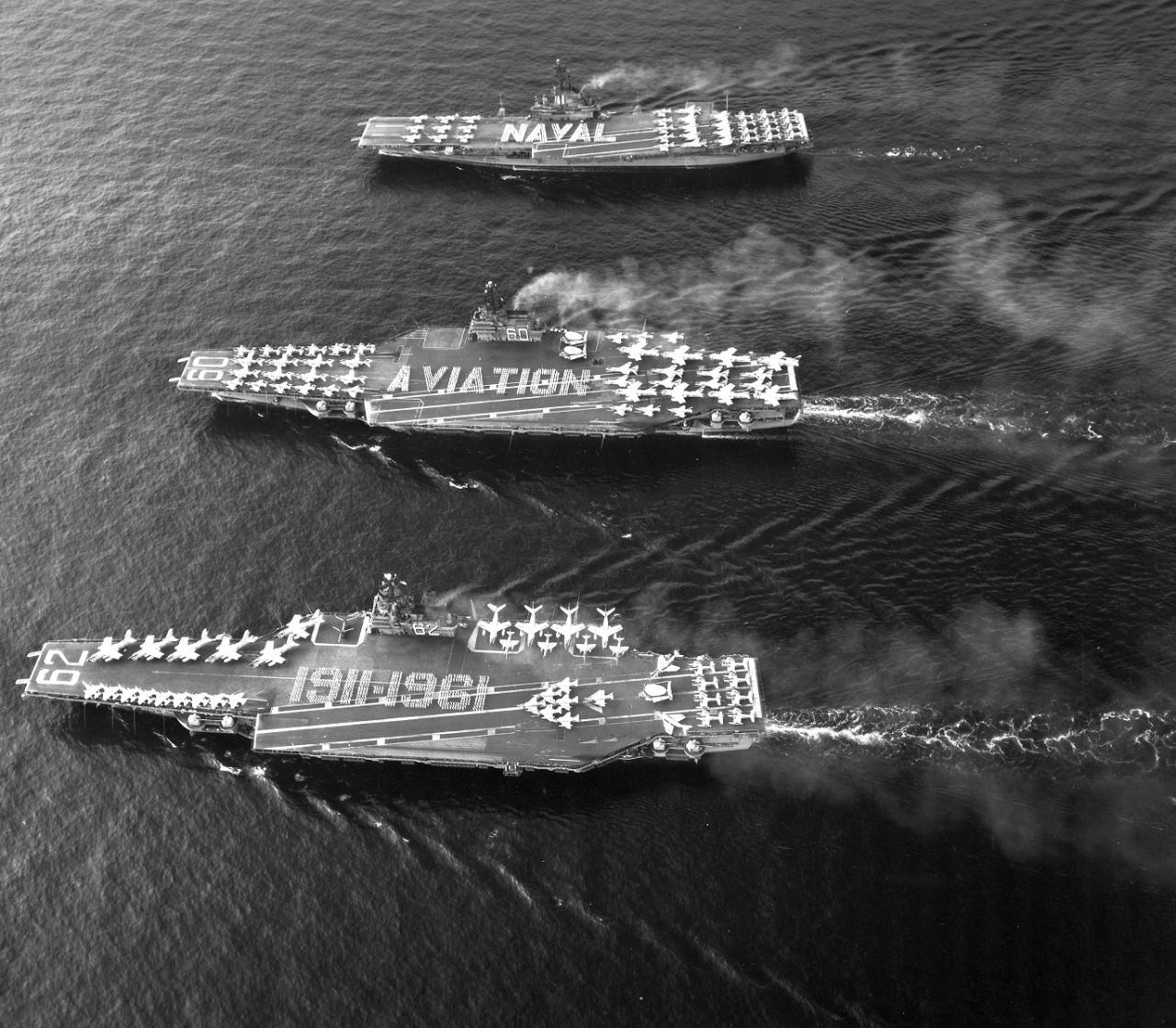 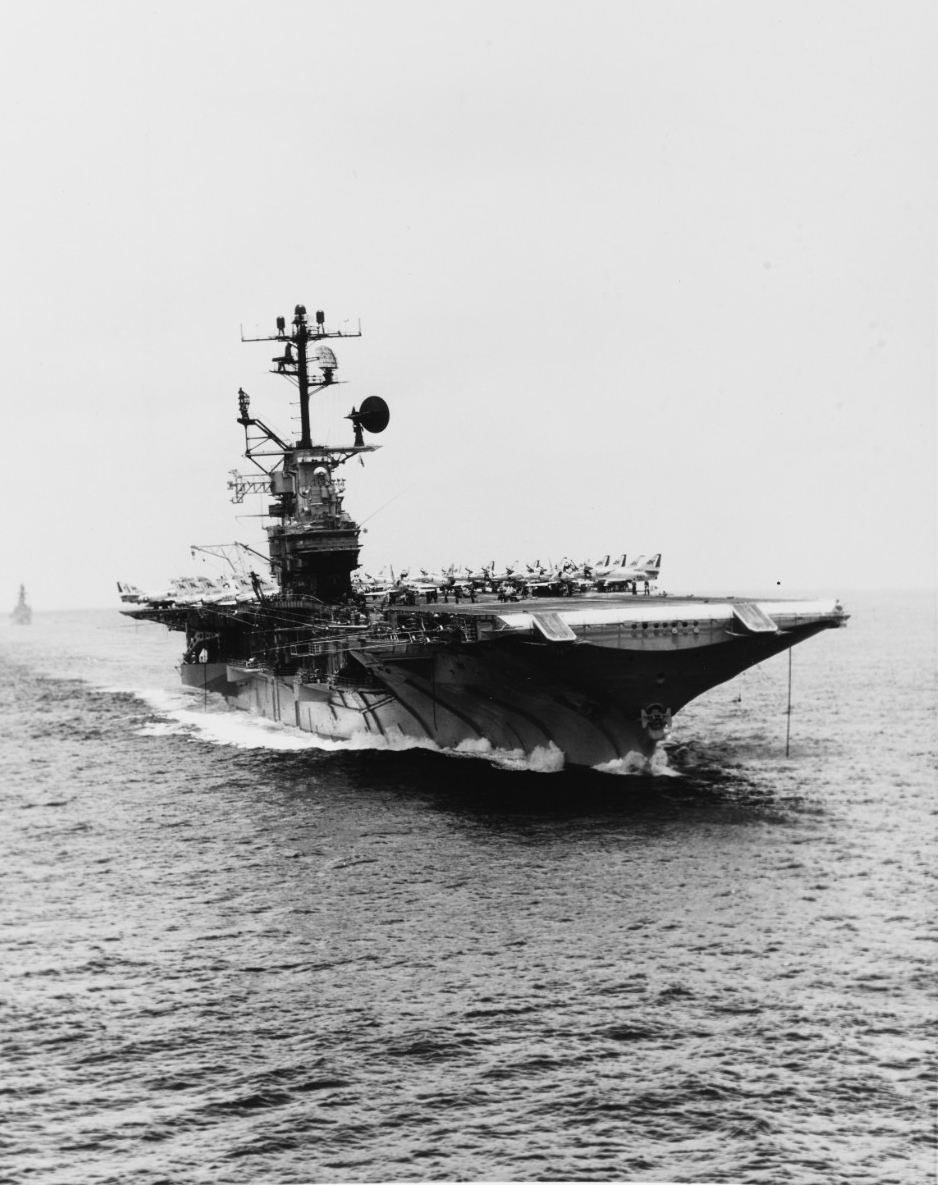 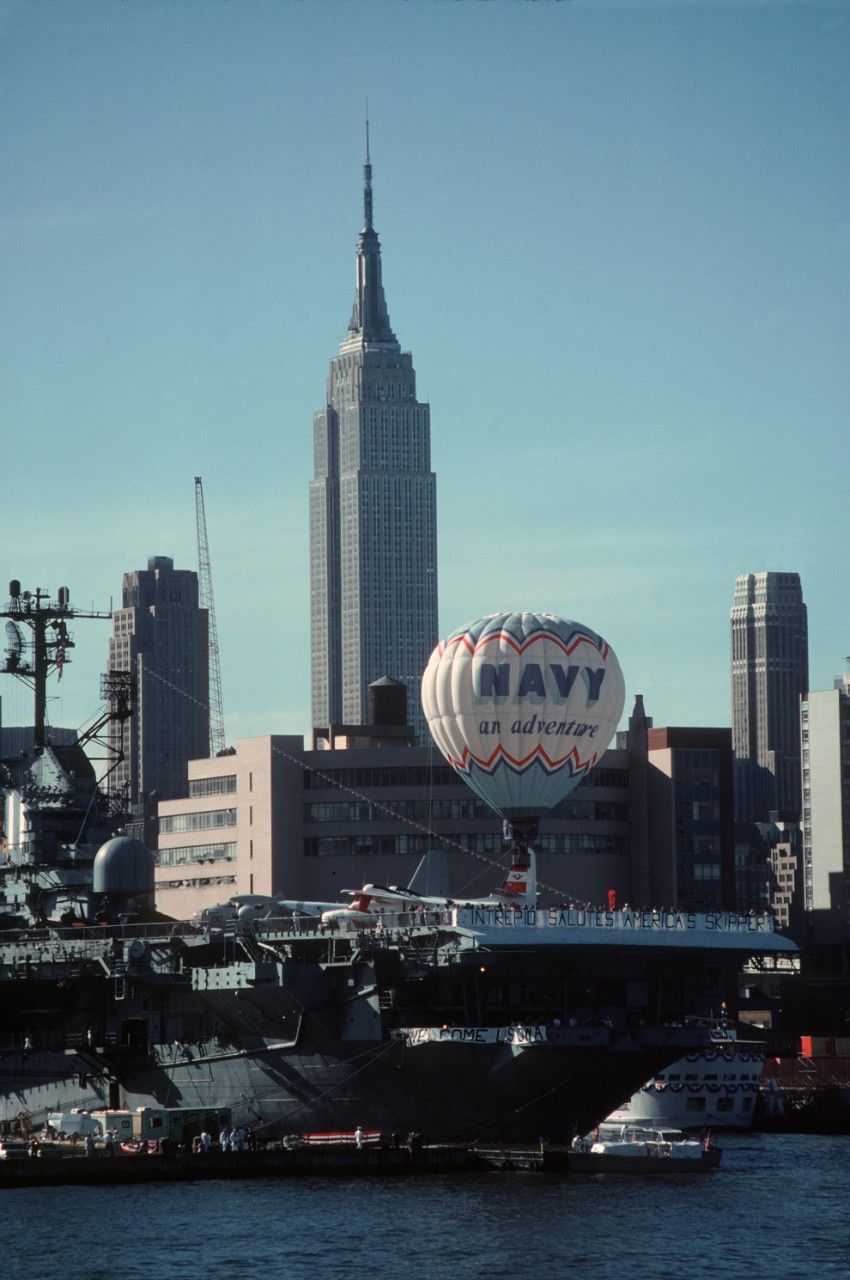 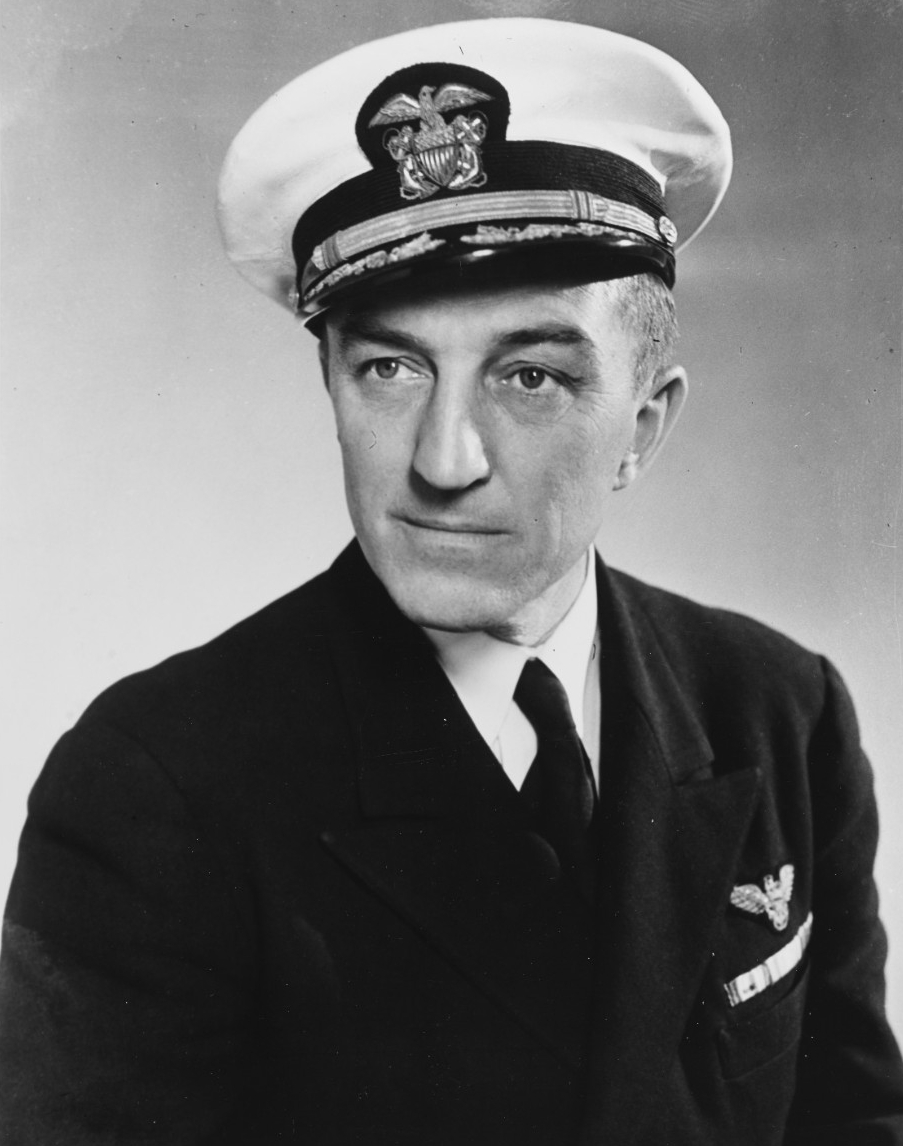 Thomas L. Sprague, pictured as an admiral, was USS Intrepid’s (CV-11) first commander. Under his command, Intrepid participated in the campaign leading up to the capture of the Marshall Islands and the first carrier attacks on Truk. Sprague commanded the aircraft carrier until March 1944. National Archives photograph, 80-G-66889. 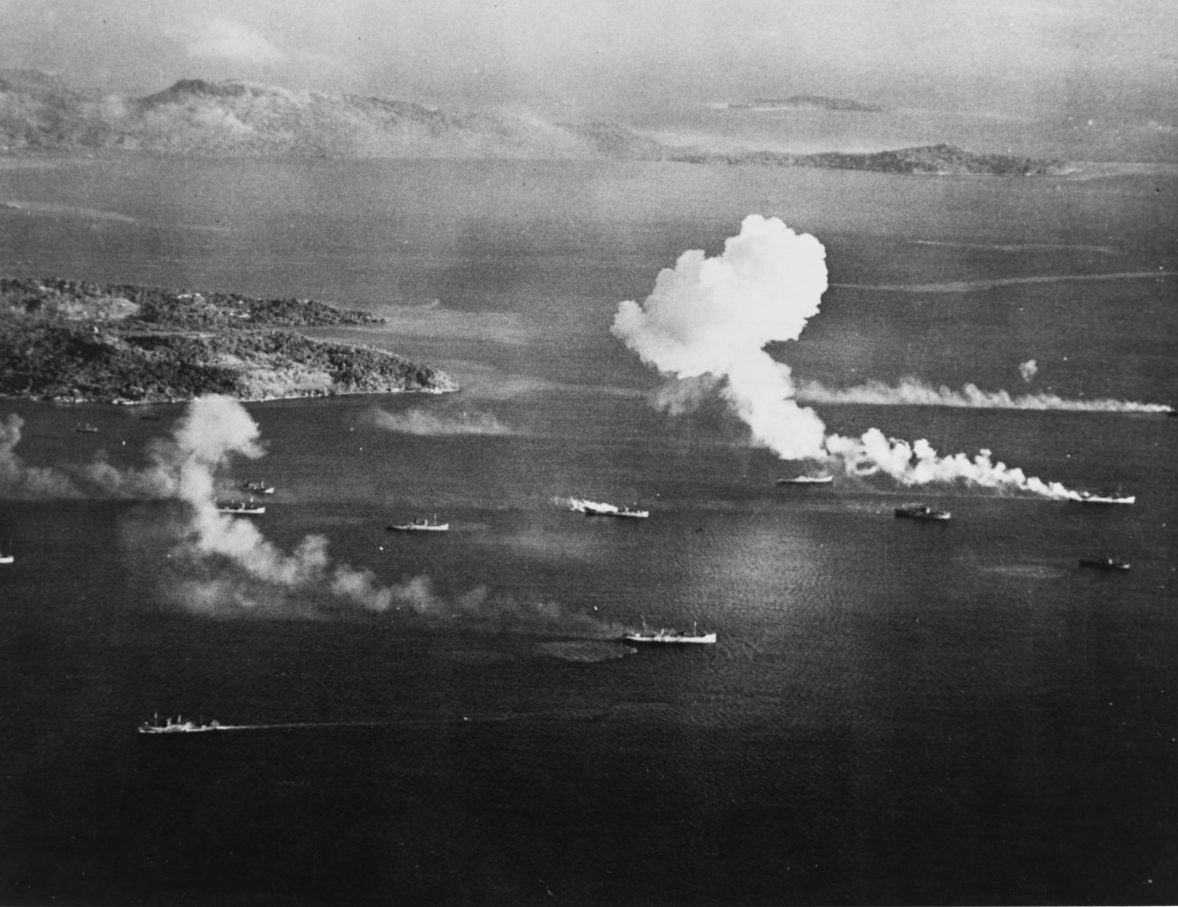 Japanese shipping under air attack during the raid on Truk as seen from a USS Intrepid (CV-11) aircraft on the first day of raids, 17 February 1944. National Archives photograph, 80-G-215151. 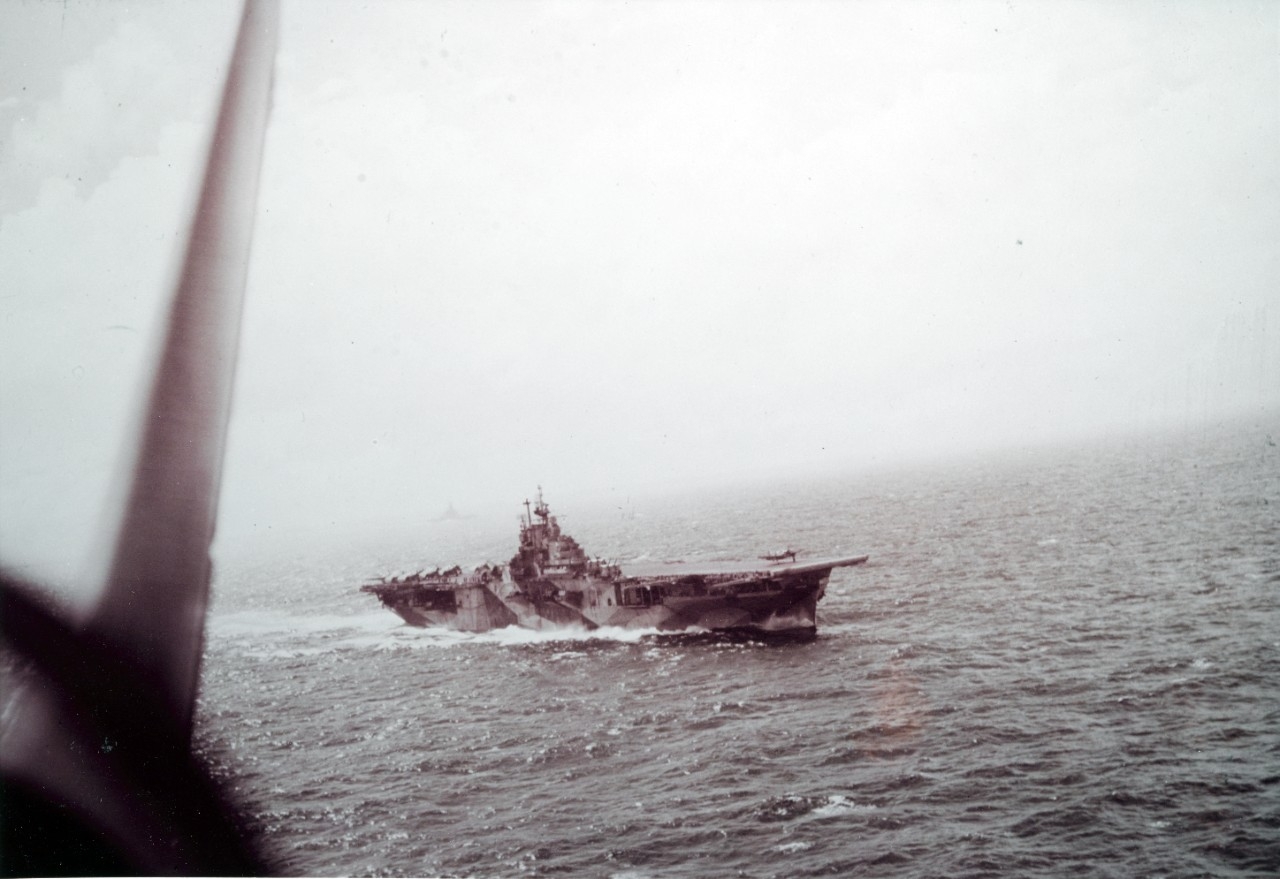 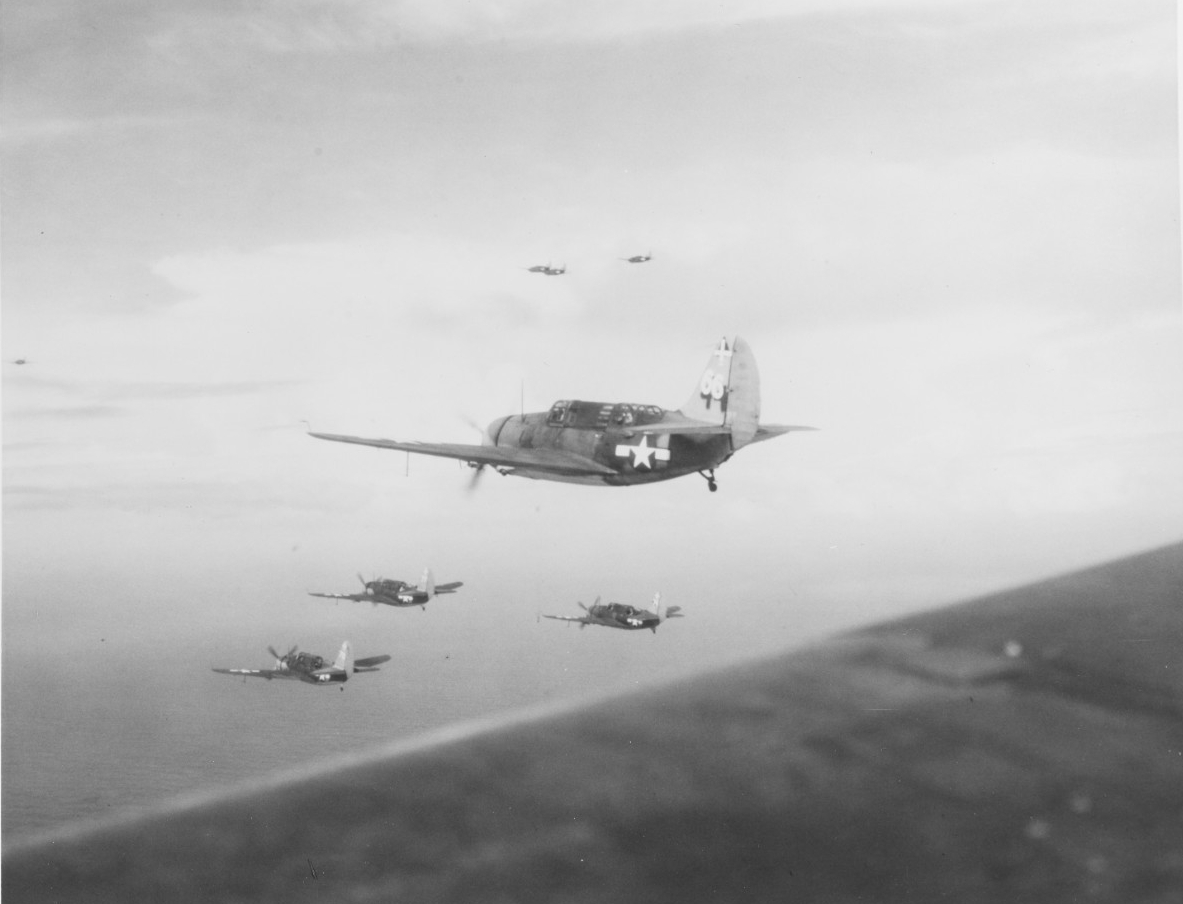 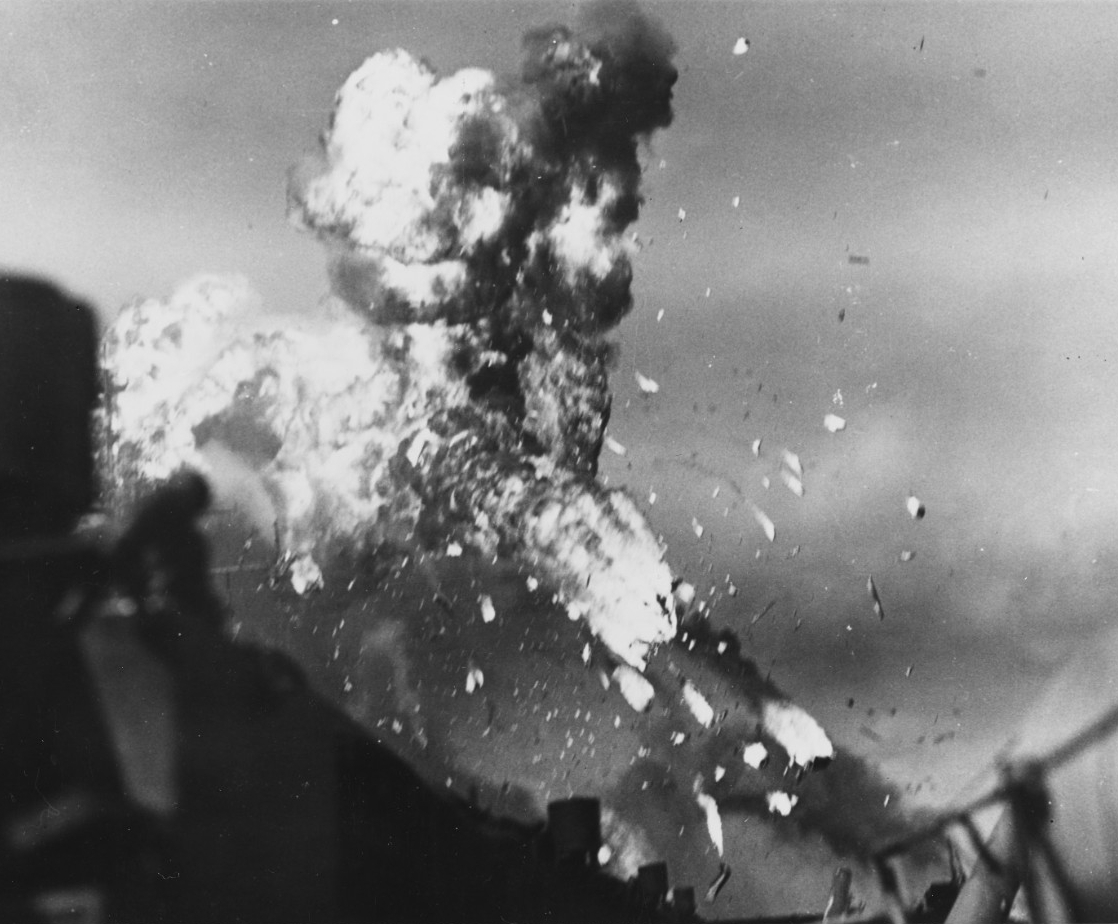 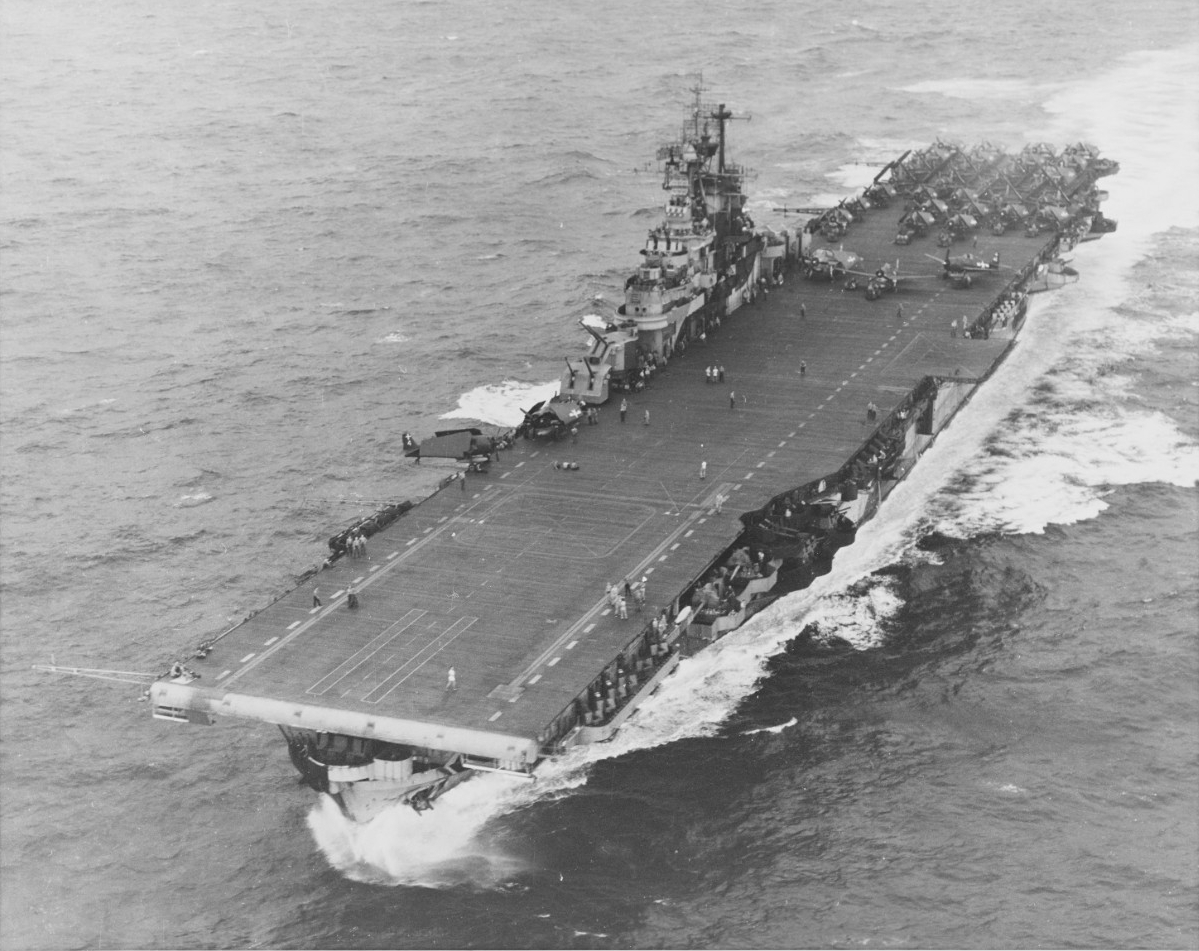 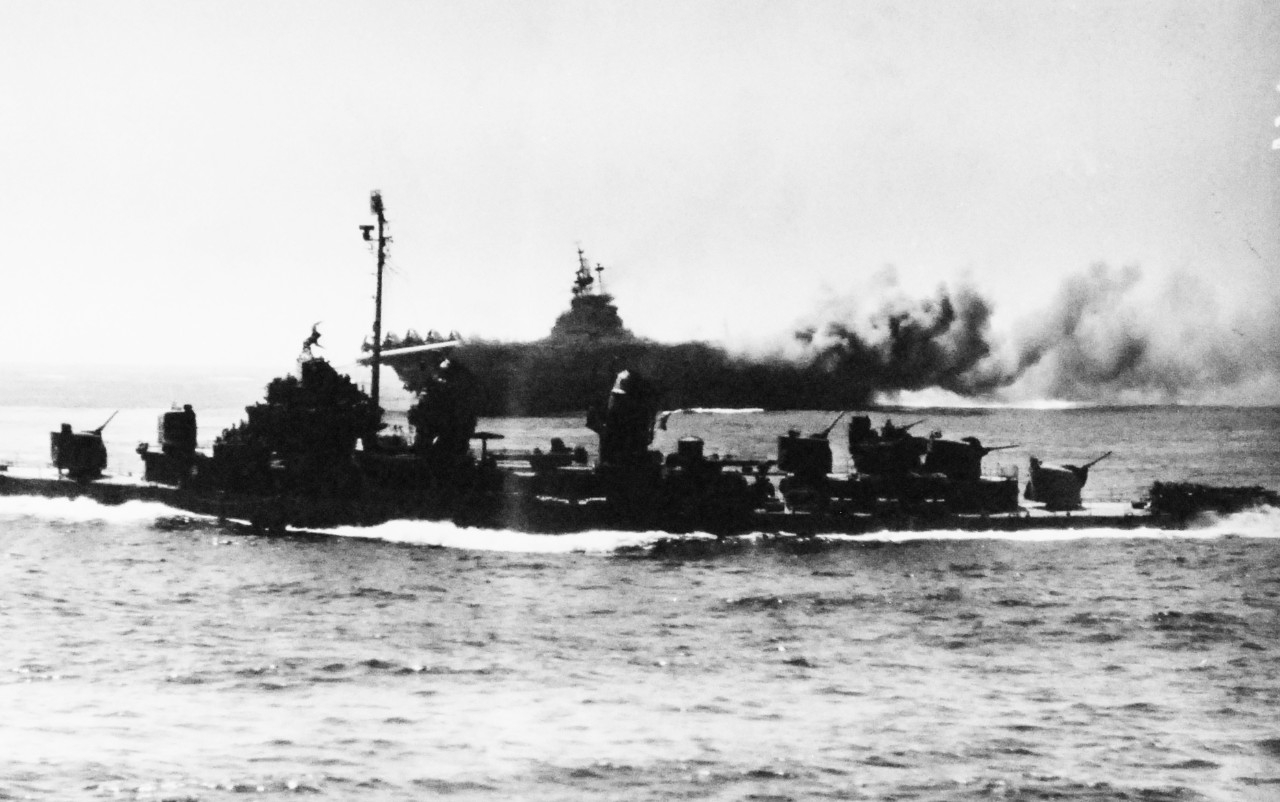 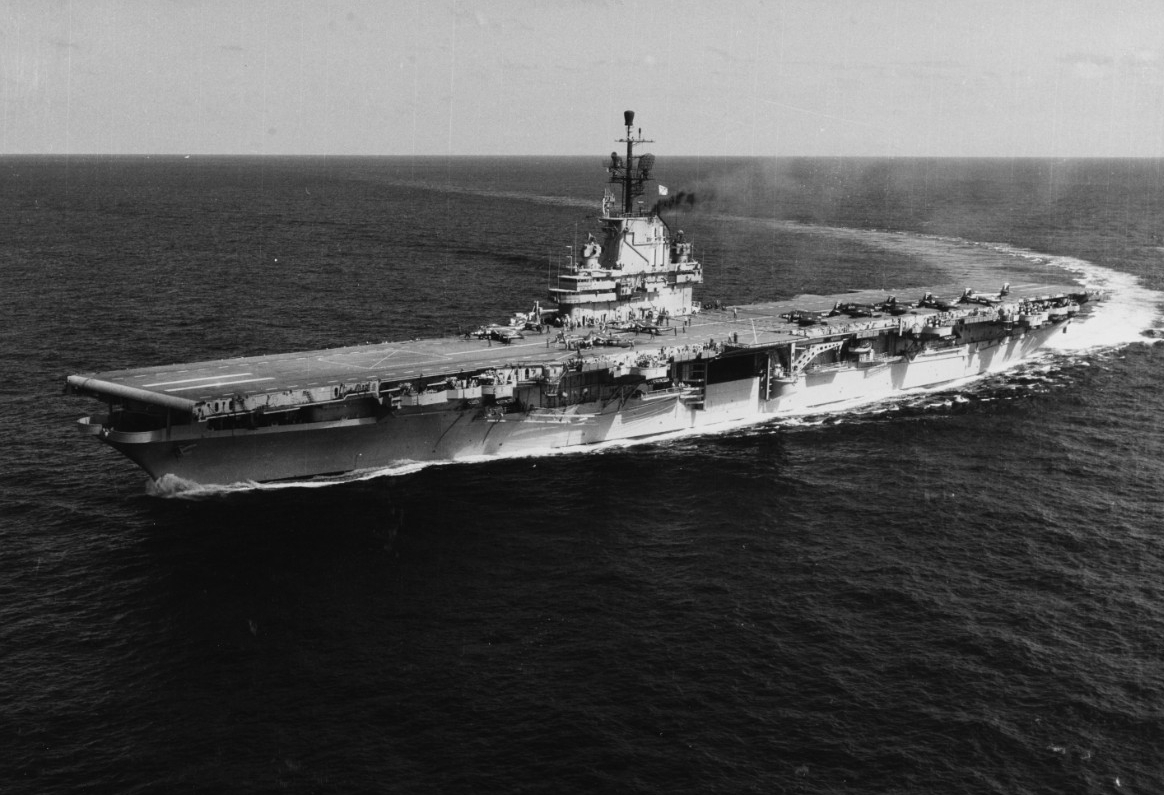 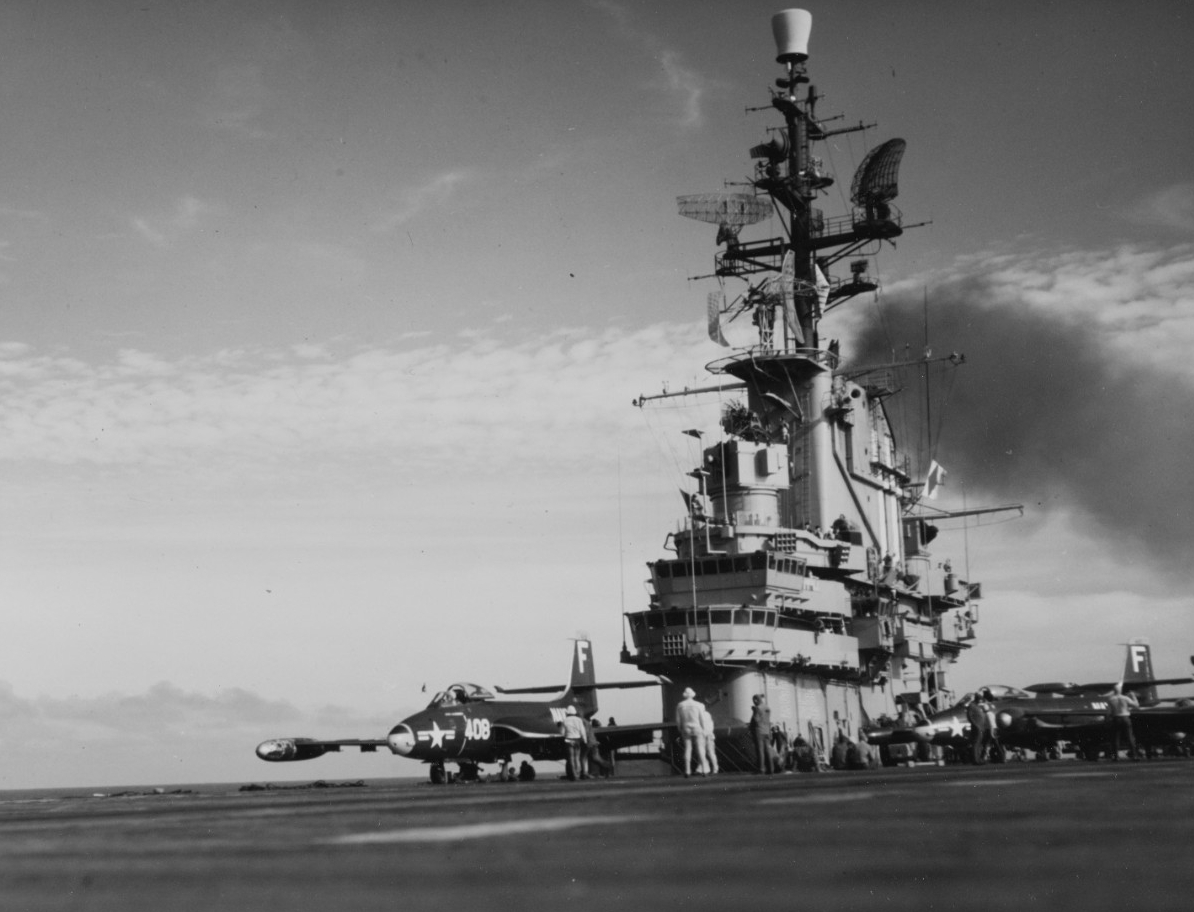 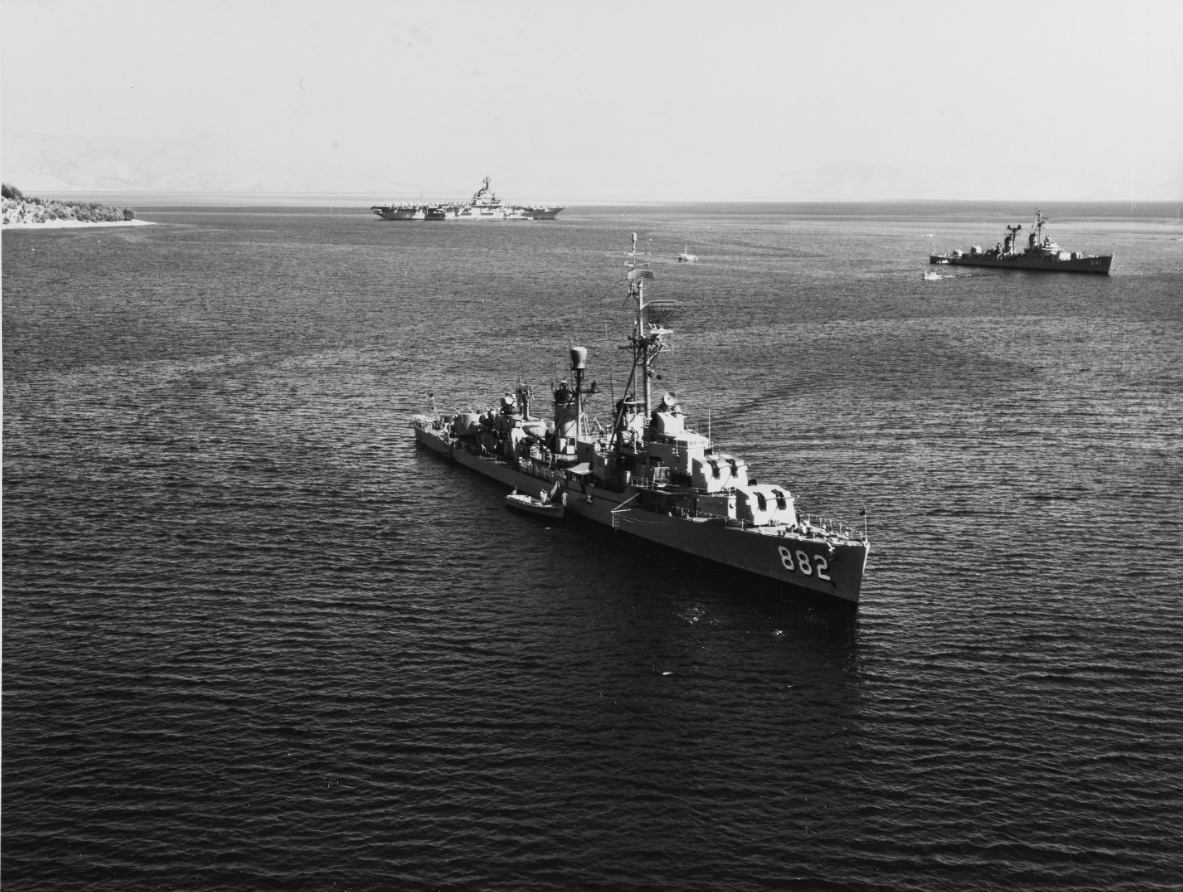 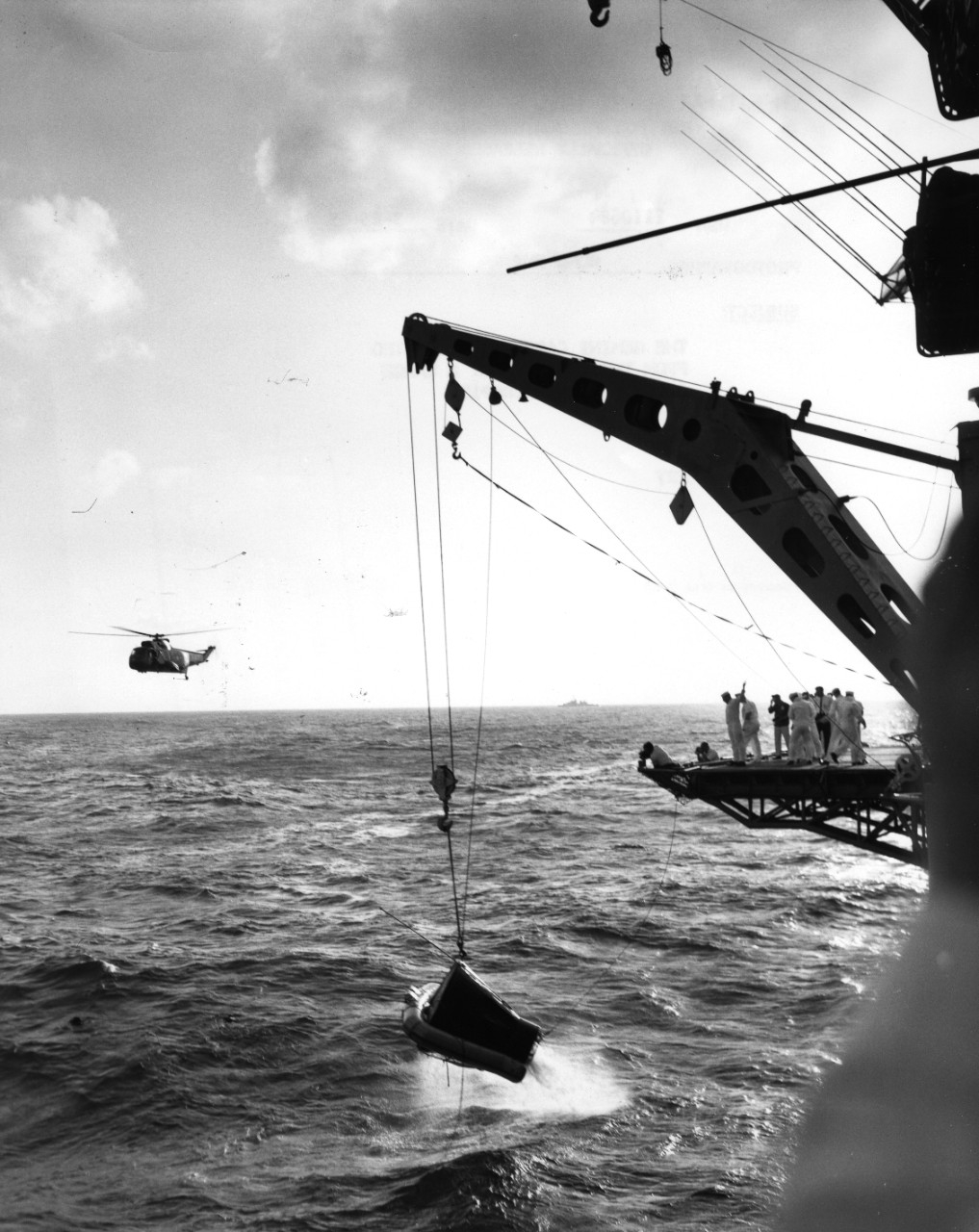 The Gemini 3 capsule was hoisted from the Atlantic Ocean by a large crane onboard USS Intrepid (CV-11), 23 March 1965. National Archives photograph, USN 1110684. 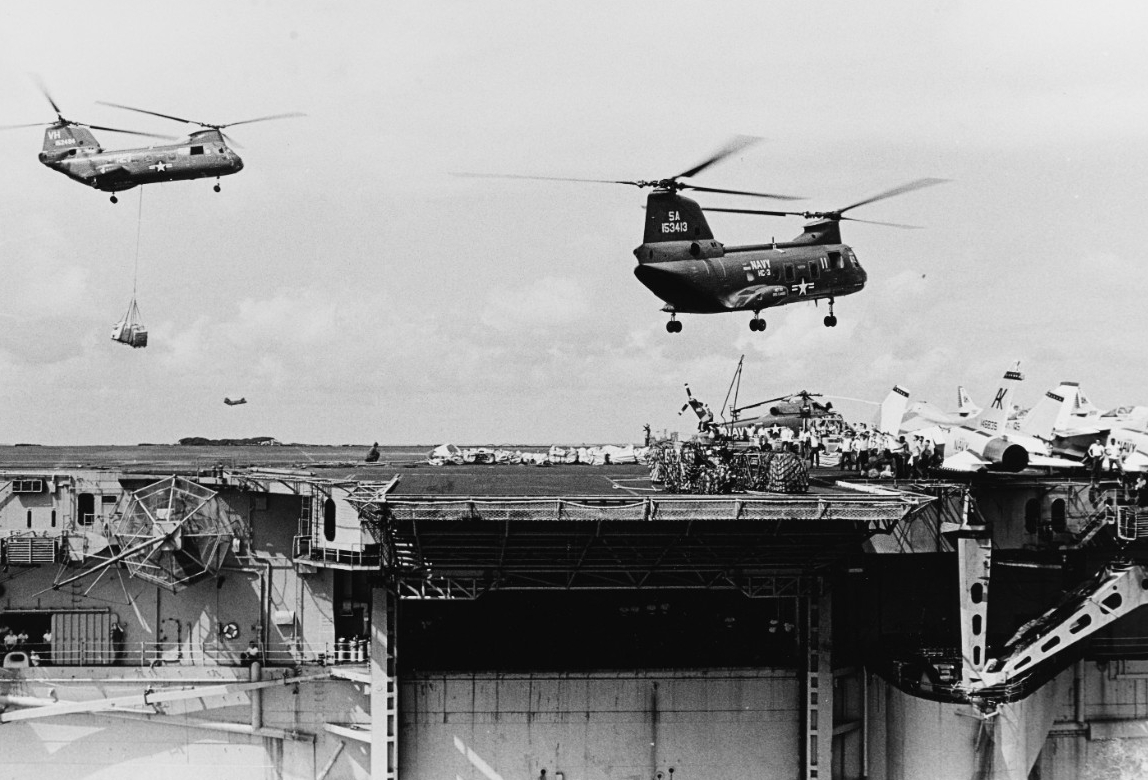 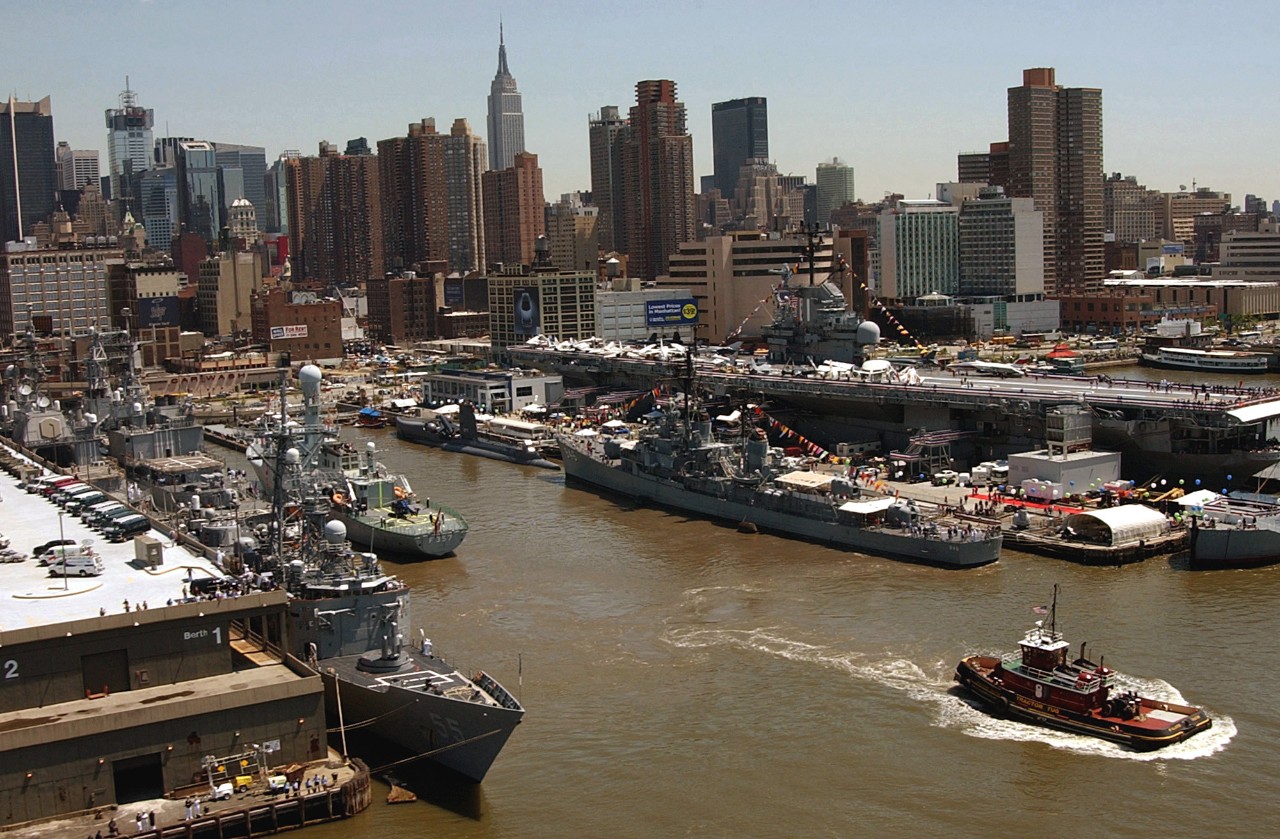