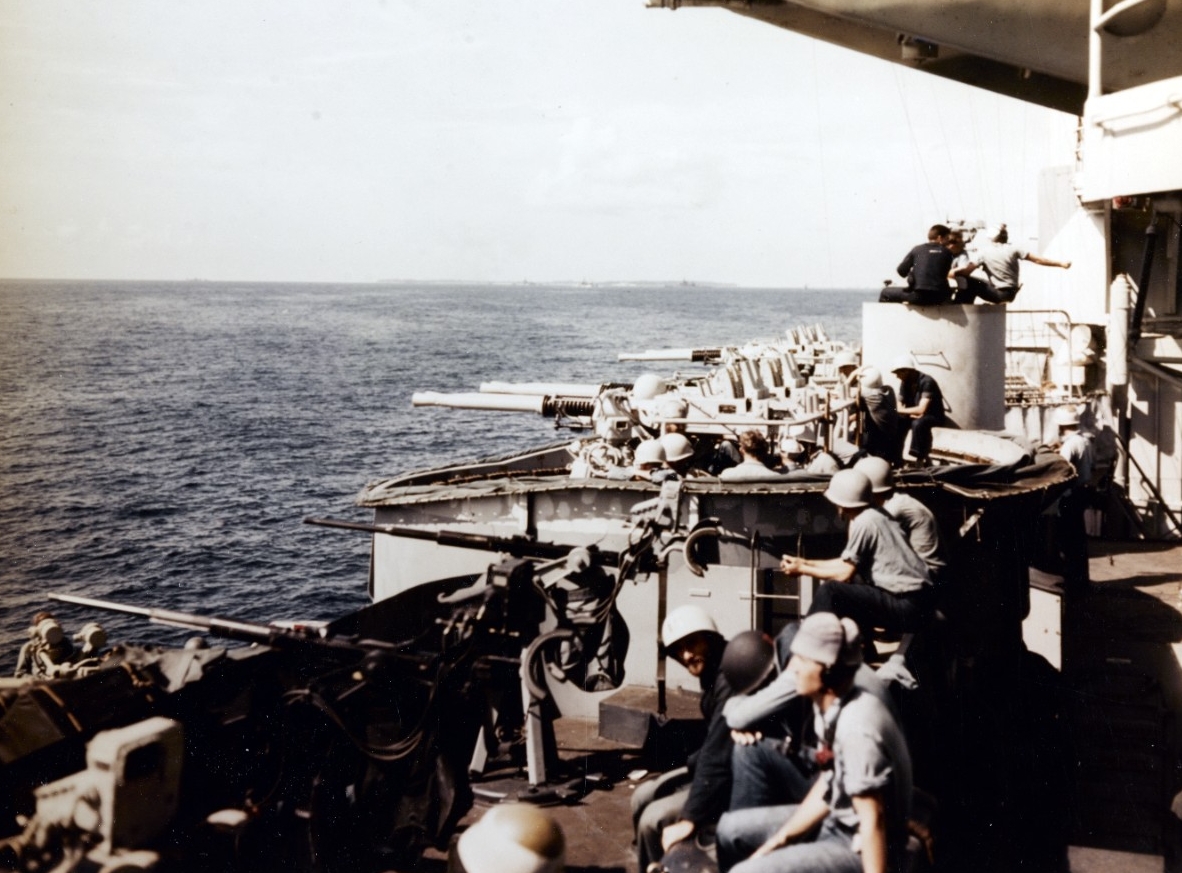 By the summer of 1944, General Douglas MacArthur’s Southwest Pacific Area forces were moving beyond New Guinea toward the Philippines. At the same time, naval and ground forces subordinate to Admiral Chester W. Nimitz (Commander in Chief, Pacific Ocean Areas—CINCPOA) had broken through the Gilberts and Marshalls chains, and were engaged in Operation Forager, the capture of Saipan, Guam, and Tinian in the Marianas. In June 1944, concurrently with the beginning of Forager, Japanese carrier forces and naval aviation were soundly defeated in the Battle of the Philippine Sea.

Capturing the Palaus group, part of the widely dispersed Caroline Islands, appeared a logical step in securing the right flank of MacArthur’s projected operations in the Philippines and breaking into Japan’s second line of defense. Occupation of the Palaus would also bolster control of the broader approaches to Japan’s Home Islands. The Joint Chiefs of Staff issued the respective planning order on 12 March, directing CINCPOA to occupy the Marianas-Palaus line. The operation, designated “Stalemate,” was set for 8 September.

Fighting on Saipan in particular was harder and of longer duration than anticipated and required deployment of a theater reserve, the Army’s 27th Infantry Division, which had been slated for the Palau operation. Thus, the original Stalemate concept was canceled on 7 July, and planning for Stalemate II, a scaled-down version that limited initial attacks to the southern Palaus and the islands of Yap and Ulithi (in the Carolines group northeast of the Palaus), began. Landings on Peleliu by the 1st Marine Division, backed up by the Army’s 81st Infantry Division, were scheduled for 15 September.

Facing overwhelming Allied firepower and material advantage, Japanese commanders realized that a change in defensive strategy was necessary. This gradually resulted in a stronger defense in depth—experienced in degrees by U.S. landing forces at Tarawa, Saipan, and Guam—and the tactical shift away from attempting to repel amphibious landings at the beach to delaying and inflicting maximum casualties and damage on the enemy. Although the importance of advantageously sited beach strongpoints was recognized, Japanese commanders accepted that landing forces might not be destroyed or repulsed at water’s edge. If this occurred, the attackers were to be channeled into “kill” zones beyond the beaches. Arranged in successive lines and using the natural terrain, systems of camouflaged and heavily fortified positions with interlocking fields of fire were constructed on reverse slopes and among other masking terrain features that favored the defenders. Greater flexibility was accorded to subordinate leaders and they were charged to seize tactical opportunity wherever possible, adapting their movement to take advantage of cover and concealment and bringing fire to bear when its effect would be greatest. The Japanese “Palau Sector Group Training for Victory” directive, captured during the battle, stated:

“It is certain that if we repay the Americans (who rely solely upon material power) with material power[,] it will shock them beyond imagination….”1

Given the shifting strategic picture in the Pacific, the Joint Staff questioned CINCPOA whether a Palaus operation was still necessary, but Nimitz indicated it was. MacArthur stressed the continued necessity of Stalemate II to President Franklin D. Roosevelt at a high-level strategy conference held in Hawaii from 26 July to 10 August 1944. On 13 August, the commander of U.S. Third Fleet, Admiral William F. Halsey, whose forces were to support the landings, proposed bypassing the relatively isolated Palaus based on the meager opposition his carrier pilots had encountered there on airstrikes. However, with two days until D-day, and assessing that the operation remained a prerequisite of the planned Leyte Gulf landings, Nimitz did not countermand it. Stalemate II was to be the largest amphibious operation in the Pacific to date, with more than 1,600 ships and craft and more than 800 aircraft deployed.

Up-to-date U.S. intelligence on the Japanese dispositions on Peleliu was sparse. Material collected by the Office of Naval Intelligence and the Marine Corps before the war was only marginally useful as the Japanese had strictly controlled peacetime access to the Palaus, which they had administered under a League of Nations mandate since 1920. Heavy foliage and ground cover predominated on aerial photos taken during attacks by U.S. Navy carrier aviation, although some evidence of Japanese tunneling was visible. However, the true extent of the Japanese fortifications, particularly in the Umurbrogol massif dominating the western side of the island, was not identified. Reconnaissance by submarine-deployed Navy combat swimmers was limited to surveys of the landing beaches. Given the apparent lack of Japanese defenses, a false sense of optimism prevailed in the 1st Marine Division, which had last fought the enemy in entirely different conditions on Guadalcanal and at Cape Gloucester on New Britain the previous year. The division commander, Major General William H. Rupertus, unwisely predicted that Peleliu would be secured in only four days, a comment unfortunately picked up and disseminated by the press. 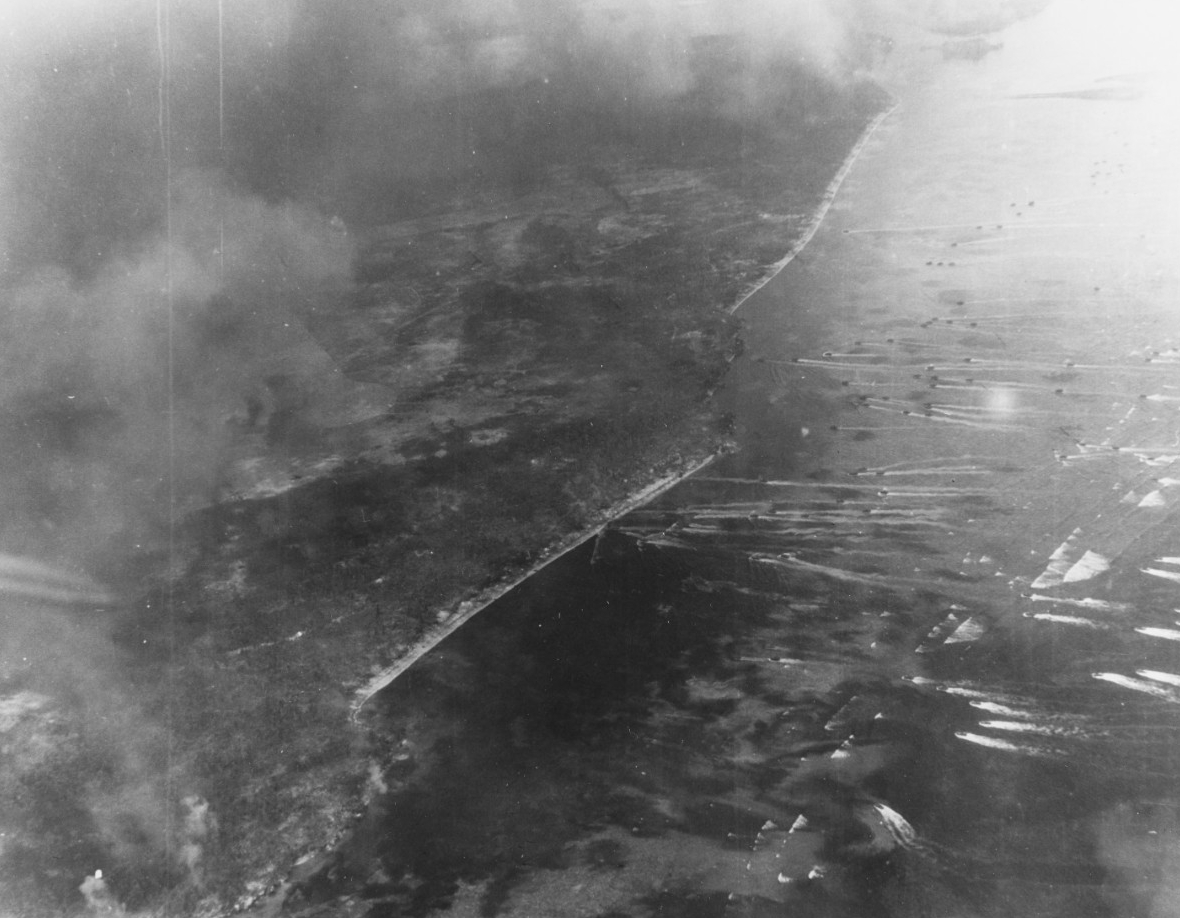 Amphibious tractor (LVT) waves approaching "White" and "Orange" landing beaches on the southwest side of Peleliu, 15 September 1944. Beaches "White 1" and "White 2" are in center, with "Orange" beaches beyond. Smoke from pre-invasion bombardment and possibly defending Japanese gunfire shrouds the scene. Part of the Japanese airfield is visible in top left center. Photograph taken from a USS Pennsylvania (BB-38) spotter plane. Note the offshore reef line (80-G-283753).

Third Fleet forces began a heavy naval and air bombardment of the island on 12 August. The 1st Marine Division landed on “White” and “Orange” beaches on the western side of Peleliu three days later. Here, Peleliu’s reef line was 700 feet from the beaches and could only be crossed by amphibious tractors (LVTs). Thus, a logistics system involving amphibious trailers towed by LVTs and cranes on barges to cross-deck supplies was employed (Navy Seabees would later build amphibious causeways to the beach). LVTs also led columns of waterproofed tanks over the reef.

Once ashore, the landing forces quickly realized that the pre-invasion bombardment had not been particularly effective. Despite securing a beachhead on the first day, the Marines had to repel Japanese counterattacks throughout the night of 15–16 August. Movement inland during the following days was slowed by the enfilading fire of well-concealed bunkers on the landing beaches’ left flank, beyond the beaches, and on the island’s high ground. The Umurbrogol ridges to the north were major obstacles and were honeycombed with well-emplaced Japanese strongpoints. In addition to the tenacious Japanese defense, the Marines had to contend with temperatures ranging as high as 115 degrees and inadvertently scarce drinking water supplies, exacerbated by the reuse of fuel cans.

The southern half of Peleliu, including its airfield, was captured within the first week following the landings. Marine Corps and Navy aircraft began operating from the airfield shortly thereafter, often flying close air support sorties so close to the airfield that Marine F4U Corsair pilots never raised their landing gear during their attacks. Missions were flown as quickly as 30 minutes from take-off to landing.

The ground fight was rough. The Marines (the 1st Regiment, in particular) sustained heavy casualties in their attacks toward the north, particularly into the first Umurbrogol ridgelines, which came to be known as “Bloody Nose Ridge.” Rupertus was reluctant to accept U.S. Army reinforcements despite the challenging situation and his Marines’ high attrition rate. Moreover, portions of the 81st Infantry Division, also allocated to Stalemate II, were committed to 17 September landings on the neighboring island of Anguar. This slowed the tactical initiative on Peleliu. Japanese forces in the northern part of the island, which sporadically received reinforcements from the northern Palaus, continued to fight with great aggressiveness as their defenses in the Umurbrogol massif were encircled and reduced by the Marines slowly and with mounting casualties.

After the 81st Infantry Division secured Anguar on 21 September, the 321st Regimental Combat Team landed on Peleliu on 23 September to reinforce the Marines. Redeployment of the 1st Marine Division around the Umurbrogol “pocket,” coupled with an attack into the western Umurbrogol ridges by the 7th Marines and a push northward by the 5th Marines between 24 and 27 September, allowed the Americans to regain momentum. The 5th Marines secured northern Peleliu and the adjoining islet of Ngesebus on 29 September. With Japanese forces in this area neutralized, this battle space was used as a jumping-off point to attack the Umurbrogol from the north through ridges that were isolated rather than mutually supporting.

Nonetheless, the fighting for the strongpoints, bunkers, and tunnel complexes typified the extreme nature of combat on Peleliu. Ultimately, tactics devolved into a slow, siege-like situation in which nearly every strongpoint had to be first isolated from adjoining positions and then reduced in hand-to-hand fighting and through the use of the “blow torch” (flame thrower) and “corkscrew” (satchel charge). An advance into the central Horseshoe Ridge area on 7 October with tank support cut Japanese access to their only fresh water source. Despite this loss, the enemy still held out in a small central perimeter. The 81st Infantry Division completely relieved the exhausted Marines on 20 October and the Army's mopping-up operations continued until 27 November, when Peleliu was finally declared secure. Amazingly, individual Japanese troops were encountered as late as March 1947 in the Umurbrogol area.

U.S. casualties on Peleliu numbered 1,544 killed in action and 6,843 wounded. Notably, the 1st Marine Regiment suffered 70 percent casualties—1,749 men—in six days of fighting while the 7th Marine Regiment suffered 46 percent casualties. Both would be considered “combat ineffective” under current combat power standards. Nearly 11,000 Japanese were killed; only 301 personnel, a small fraction of the Japanese forces on the island, were taken prisoner. In contrast, of the other Stalemate II targets, Yap was bypassed and isolated, and the 21 September landing on Ulithi by one of the 81st Infantry Division’s regiments was unopposed.

The decision to execute Stalemate II remains a subject of debate. Never far under the surface in such discussions is the high blood toll paid by U.S. forces on Peleliu. These faced a determined and tactically skillful foe who had—largely unbeknownst to many American commanders—consolidated lessons learned in previous island battles into a very effective defensive concept. At this stage in the conflict, however, following severe losses in the central Pacific and with the Home Islands already under aerial attack, the Japanese were faced with rapidly dwindling means to wage war. Given this situation, whether Japanese forces on Peleliu would have posed a serious threat to MacArthur’s push into the Philippines is an open question. Ironically, Peleliu, won at such a great cost, would not play any significant role in the final year of the war. Instead, Ulithi became the U.S. Navy’s primary fleet support hub in the western Pacific. 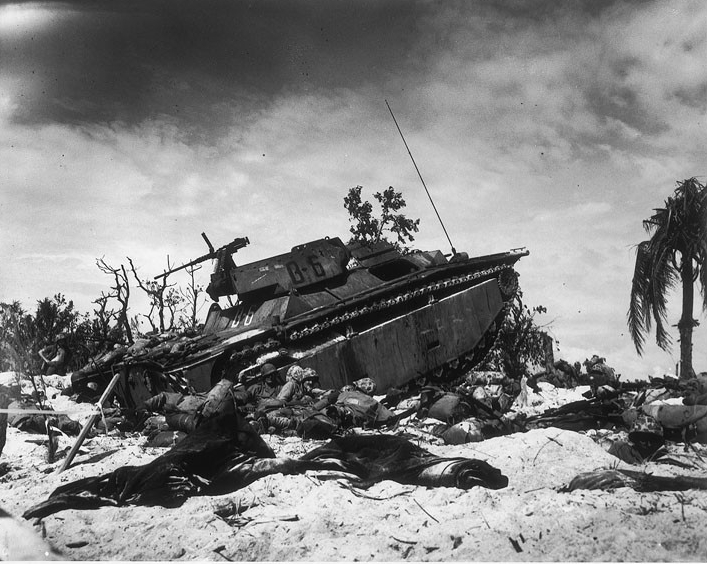 D-day on Peleliu, 15 September 1944: Marines on one of the "Orange" landing beaches seek cover from Japanese fire behind an LVT (USMC).