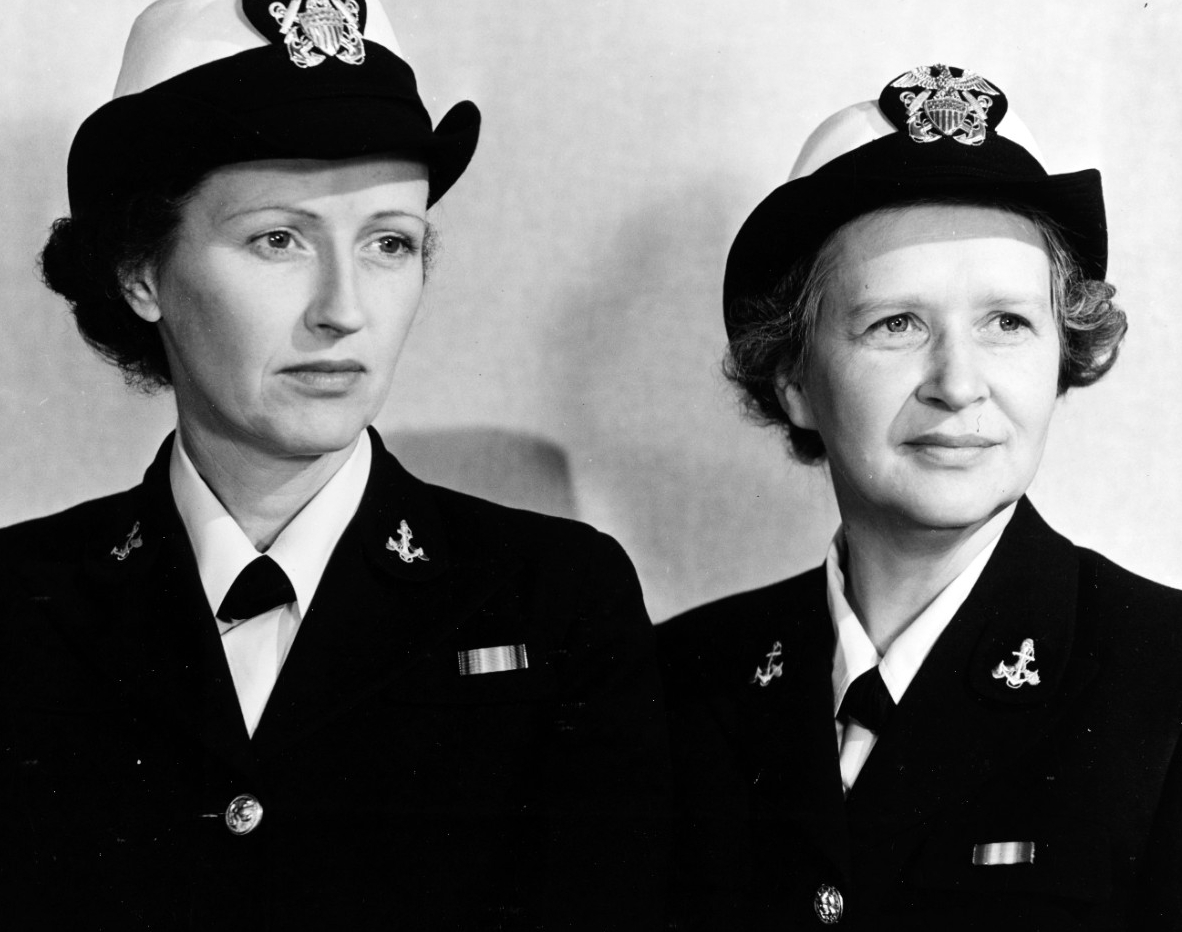 Lieutenant Commander Joy Bright Hancock, USNR (left), and Lieutenant Eunice Whyte, USNR, circa 1943. Both had served in World War I as yeoman (F) and were the only World War II WAVES eligible to wear the World War I Victory Medal ribbon (80-G-44492).

The annual Sea Services Leadership Association’s conference, which includes the Joint Women’s Leadership Symposium, features the presentation of the Joy Bright Hancock Leadership Award. Captain Hancock is well deserving of such honors. She served in the Navy as a yeoman (F) during World War I and worked between the world wars at the Bureau of Aeronautics where, among other achievements, she started Naval Aviation News magazine. After being widowed by two aviators, she overcame her fear of flying by learning how to fly herself.

On 30 July 1942, President Franklin D. Roosevelt signed Public Law 689, establishing a program for women in the U.S. Navy as an integral part of the Naval Reserve. The Navy’s newest members served for the duration of the war plus six months. On 2 August 1942, Mildred McAfee, president of Wellesley College, became the director of the Navy’s female reserve program and the first female naval officer with the rank of lieutenant commander.

Joy Hancock served as the liaison officer between the Bureau of Aeronautics and the Navy’s female reserve program, better known as the WAVES, an acronym for “Women Accepted for Volunteer Emergency Service.” She persuaded BuAer leaders to integrate the female reservists’ aviation training and to make widest use of the qualified WAVES. Over 20 percent of the 90,000-plus female reservists worked in the aviation community performing a variety of duties ranging from air traffic controller to aviation mechanic. They helped train most Navy pilots during World War II.

Hancock became the director of the WAVES in February 1946. She played an instrumental role in assuring passage of the Women Armed Services Integration Act of 1948, which created a permanent place for women in the peace time military. She was one of the first six women sworn into the regular Navy that same year. When Captain Hancock retired in 1953, she received the Legion of Merit for her contributions as the WAVES director.

In 1954, she married Vice Admiral Ralph Andrew Ofstie and was widowed for a third time two years later. Hancock published her memoir, Lady in the Navy, in 1972. Her personal paper collection resides at the Butler Library at the University of Georgia at Athens. Her oral history interview is part of the United Naval Institute’s two volumes about the WAVES. Her profile was featured in Leadership Embodied, published by the Naval Institute in 2005. She is buried in Arlington Cemetery with her husband.

Joy Hancock’s energetic, innovative, diligent, enthusiastic, and disciplined personality served her well. She reserved time to meet with enlisted personnel during her many command visits. Her naval career suggests that leaders should be energetic, visionary, and critical thinkers. They should ask not “why,” but “why not,” and think outside of the box. Above all they must take care of their people—officer and enlisted personnel. They must listen to them.

Hancock concluded her memoir with these words: “I admit to great pride in having had the privilege of being one of the leaders of an outstanding group of women, the WAVES. To them I shall always owe a debt of gratitude for they, by their performance, loyalty, and dedication and their pride in service, made our accomplishments possible.”