The “Graveyard Shift”: The Most Dangerous Place off Okinawa 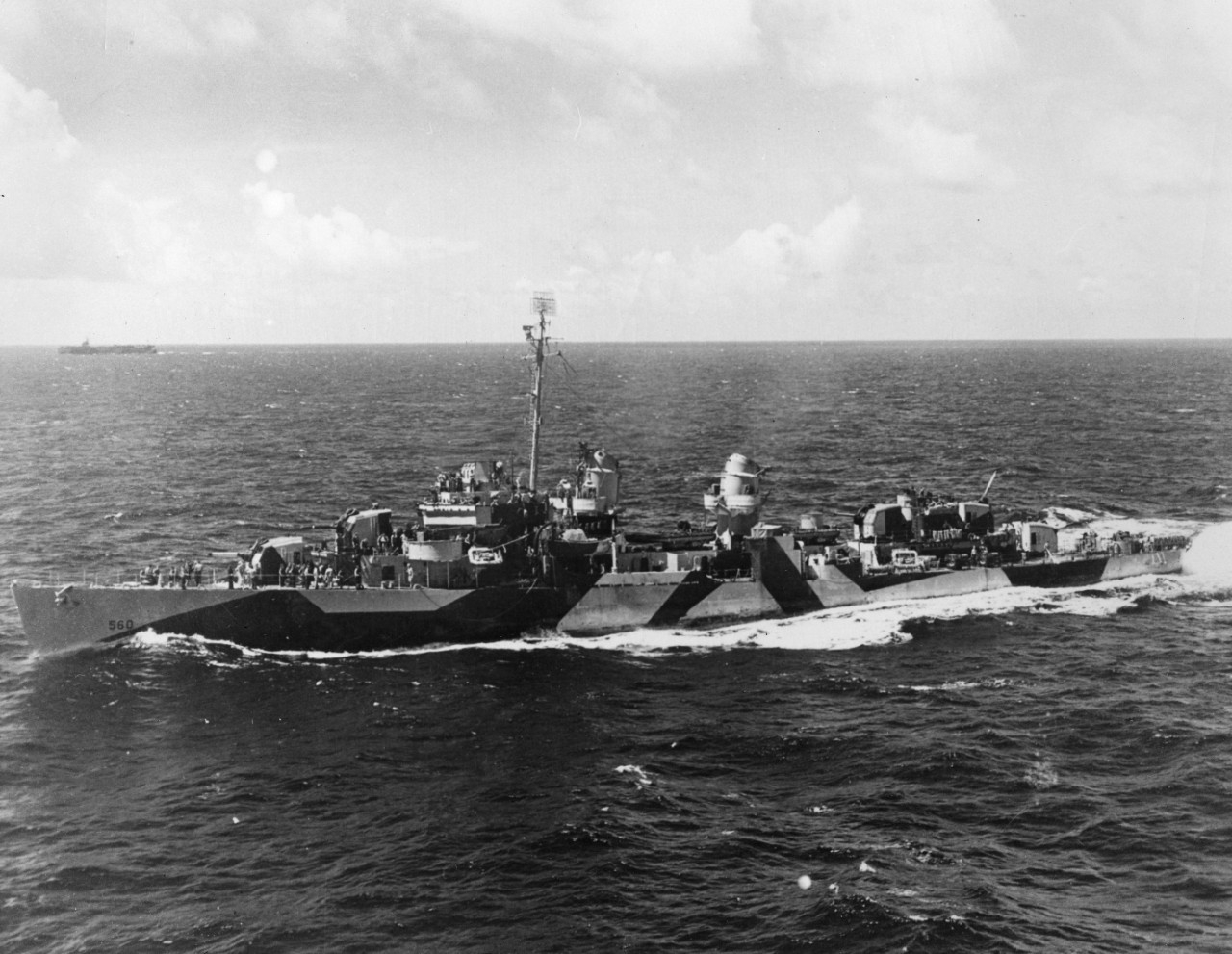 USS Morrison (DD-560) underway, in a photo taken from USS Gambier Bay (CVE-73). Another aircraft carrier can be seen in the distance. National Archives photograph, USN 243852.

The mass assaults by kamikazes against the Fifth Fleet off Okinawa, although doing severe damage to ships and their crews, was not the success the Empire of Japan hoped it would be. Despite the sinking of several smaller U.S. Navy vessels in March and April, the ships taking the brunt of the Kikusui operations remained the picket destroyers. Sailors onboard the “tin cans” often remained at general quarters for hours, even days, at a time. Moreover, despite the use of early-warning radar to detect incoming enemy aircraft, lookouts often strained their eyes for suicide boats, submarines, mines, and other dangers. Always vigilant in their duties, the crews remained nervous, weary, and exhausted while patrolling on the extremely dangerous picket stations. The destroyer Sailors came to call these patrols the “graveyard shift,” due to the extreme vulnerability and danger involved while acting as early warning vessels for the larger ships. Several of the tin can crews were already witnesses to the damage kamikazes inflicted against ships and fellow shipmates, and vowed not to become victims themselves.

During the Battle of Okinawa, the destroyer Morrison (DD-560), served as a radar picket ship. Already a veteran of several battles and campaigns over the course of the Pacific War, crewmembers of the “Mighty Moe” held an impressive record at sea, including the destruction of an enemy submarine. On 31 March 1945, while on station off Okinawa, Morrison spotted and attacked Japanese sub I-8. After dropping 11 depth charges and forcing I-8 to surface, a furious half-hour gun battle erupted. While taking fire from the submarine’s deck guns, the destroyer responded with an onslaught of 40-millimeter and 5-inch gunfire, sending I-8 to the bottom.

Not two weeks later, Morrison came to the assistance of fellow tin can Anthony (DD-515) on the night of 11 April 1945, after several suicide boats attacked that destroyer. Morrison also assisted in sinking or damaging several Japanese landing craft making way for the northern section of Oshima Beach. Despite the danger Mighty Moe typically encountered, her next several assignments proved the most hazardous of the war. On 14 April, Morrison received orders to take up radar picket duty, and steamed to the west to take up her position on the graveyard shift.

On 30 April, Morrison received orders to steam to the north to take up radar/fighter-director duties. Picket station No.1 remained “the hottest spot on the radar picket line and scene of the most kamikaze attacks,” claiming a destroyer per day. Expecting air attacks around the clock, the crew remained at general quarters for the next few days. On 4 May, at 0715, the anticipated attack finally materialized as 25 suiciders appeared to begin their assaults. While friendly aircraft from the combat air patrol (CAP) engaged, forcing several kamikazes to break off their attack runs, a Mitsubishi A6M Zero (“Zeke”) managed to drop a bomb near the destroyer, just missing Morrison’s starboard beam.

At 0825, a Zeke or Aichi D3A Type 99 carrier bomber (“Val”) struck the destroyers number one stack and bridge, destroying her radar, main battery, and radio. Gunners Mate William A. Mann recalled, “The first one to hit us was close enough you could just see the guy sittin’ there in the cockpit smiling. He was just as happy as he could be.” As communications went down throughout the ship, a second kamikaze smashed into gun number three only minutes later, while the third to strike Morrison (possibly a Zeke or Val) crashed into gun number five. Attacked and taking severe damage from four enemy aircraft in less than five minutes, Morrison burned intensely, listing to starboard. 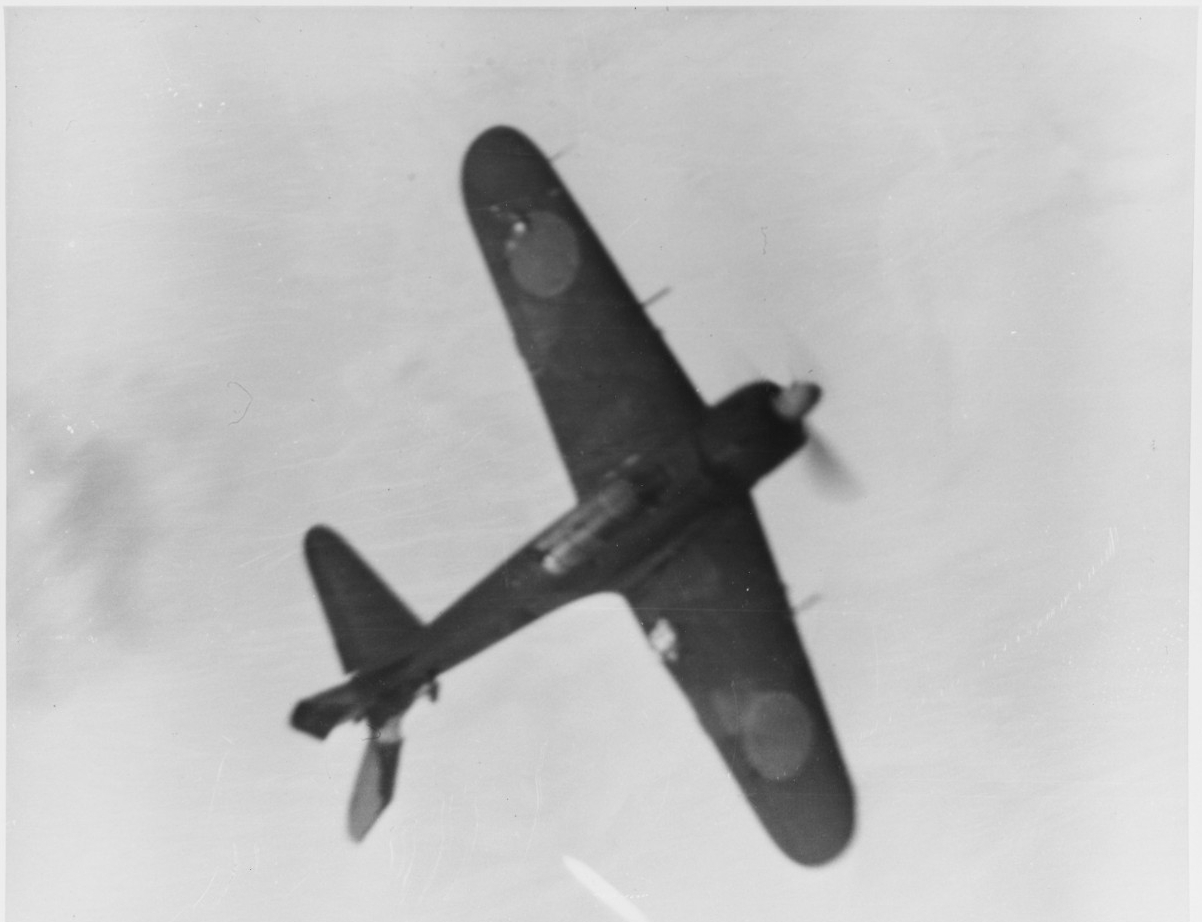 Remaining at his gun station, Mann quickly realized the Mighty Moe was in trouble, and hurried to the main deck before he “walked right off” the destroyer as she rolled over on her side. “Within ten minutes our ship was sunk and out of sight,” he remembered. “It gives you quite a feeling when you know that you’re going to have to swim.” With the ship’s intercom (1MC) wiped out, most of the Sailors below decks never heard Commander James R. Hansen’s order to abandon ship. Verbal orders quickly passed throughout Morrison, especially from Lieutenant Commander Jack Simpson, Executive Officer (XO), before two simultaneous and deadly explosions sealed Morrison’s fate. ”Everybody below deck went down with the ship,” Petty Officer Mann claimed, although a few from the forward and after engine rooms managed to survive.

Sonarman Second Class Sidney Bick, wounded during the sinking, recalled the horror of seeing Morrison going down by her stern. “We were all scared to death,” he later stated. “I was lucky to slide off the ship before she went down…I swam over to the captain and the next thing I know he is slapping a bandage to my neck.” As the men awaited rescue, Japanese aircraft strafed survivors, killing and wounding several more. After a couple of hours in the water, landing craft ship LCS(L)-21 arrived to pluck Mighty Moe survivors from the sea. Several of the men, helped onboard due to wounds or exhaustion, neared complete collapse. “I couldn’t climb the cargo net, I was so exhausted,” Mann recalled. While most of the survivors were repatriated to Guam to await transport home, many of the more seriously wounded recovered onboard hospital ship Mercy (AH-8). The loss of Morrison and 152 of her crew at Picket Station No. 1 proved one of the most deadly kamikaze attacks of the entire battle.

Her commanding officer, Commander James Hansen, later received the Navy Cross for his actions against overwhelming enemy odds. In recognition of the crew who fought onboard Morrison, the tin can received eight battle stars during the war, as well as two Navy Unit Commendation (NUC) awards, the second for her role during the graveyard shift at Okinawa.