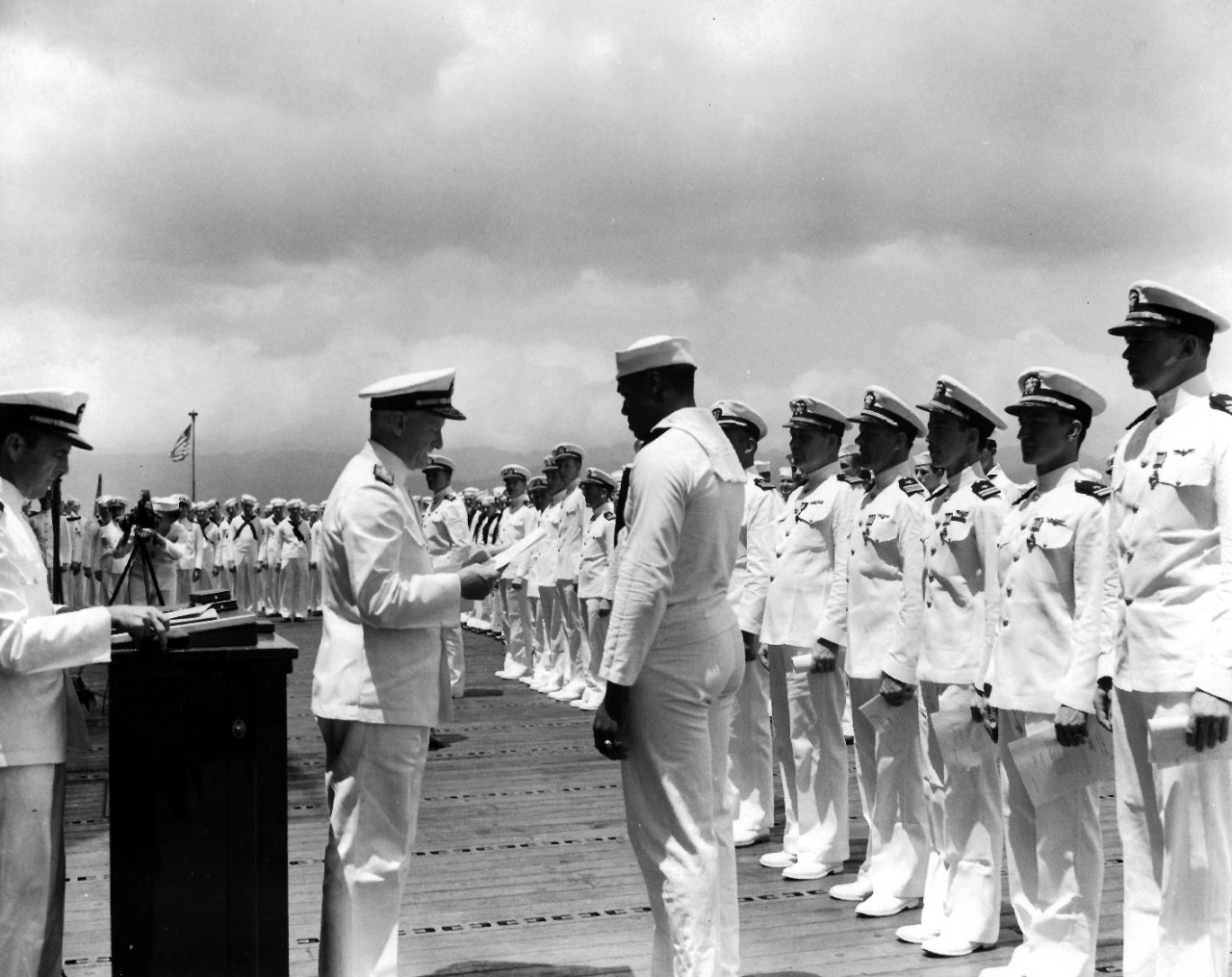 Doris Miller, Mess Attendant Second Class, USN, receives the Navy Cross from Admiral Chester W. Nimitz, at an awards ceremony held on the flight deck of USS Enterprise (CV-6) at Pearl Harbor, 27 May 1942. The medal was awarded for heroism onboard USS West Virginia (BB-48) during the Pearl Harbor attack on 7 December 1941. Official U.S. Navy Photograph, now in the collections of the National Archives.

The Navy Cross was established by an act of Congress (Public Law 253) on 4 February 1919 "to any person who, while in the naval service of the United States, since the sixth day of April, nineteen hundred and seventeen, has distinguished, or who shall hereafter distinguish, himself by extraordinary heroism or distinguished service in the line of his profession, such heroism or service not being sufficient to justify the award of a medal of honor or a distinguished service medal." On 7 August 1942, Congress limited the Navy Cross to combat-only recognition and elevated its status to just below the Medal of Honor.

The Navy's Division of Pictorial Publicity was responsible for the original design of the medal, and asked sculptor and Commission of Fine Arts member Herbert Adams to manage the process. Adams reached out to fellow commission members James Earle Fraser and Paul Manship. Manship and Fraser had previously been chosen to design the Navy's Medal of Honor, but Secretary of the Navy Josephus Daniels rejected their design for appearing too European.

Fraser is credited as the primary designer of the Distinguished Service Cross, as the Navy Cross was originally called. (Fraser was also the designer of the World War I Victory Medal and the obverse of the Buffalo nickel.), Subtle variations have marked the evolution of the Navy Cross from 1919 to the present. The original medal was a three-part construction: the cross itself and the front and back medallions, which were struck separately and subsequently soldered together. Since World War II, however, the medal has been struck in one piece.

This list of Navy Cross recipients includes links to citations as well as to biographies and summaries that may also contain the citation.

The earliest issues of the Navy Cross (1919-1928) had a very narrow white stripe centered on the blue ribbon and a planchet of dull, sometimes greenish bronze. Some were awarded with the planchet reversed, the sailing ship being placed on the back and the crossed anchors and "USN" on the front. A split broach with an open-pin catch was used.

When the Navy ordered new Navy Crosses in 1942, in response to the macabre nickname of the previous version ("black widow"), the new specifications stated that the medals were to have a light yellow finish.

One variation picked up the informal nickname "Black Widow" and was in use about 1941-1942, in which the medal itself and its wrap broach were over-anodized for a very dark, gunmetal finish.