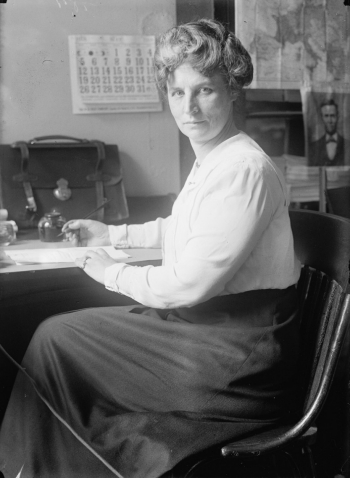 Lenah Sutcliffe Higbee served in the United States Navy from 1908-1922.  For eleven of her fourteen years of service, Higbee was Superintendent of the Navy Nurse Corps.  Chief Nurse Higbee received the Navy Cross for her leadership of the Navy Nurse Corps during World War I.  She was the first female to be presented the award.  A Canadian by birth, Higbee completed her formal nursing training at the New York Postgraduate Hospital in 1899 and that same year married retired U.S. Marine Corps Lieutenant Colonel John Henley Higbee.  Higbee worked in private practice following her marriage.  Higbee’s husband passed in April 1908 and she advanced her nursing career by completing a post graduate course at Fordham Hospital in New York City.  On 13 May 1908, Congress passed legislation allowing for the establishment of Navy Nurse Corps—the equivalent of the Army Nurse Corps established in 1901.  The Navy required members of its Nurse Corps to be unmarried and between the age of 22 and 44.  The thirty-six year old and widowed Higbee joined nineteen other females to make up this first group of female Navy Nurses—known as the “Sacred Twenty.”  Higbee became Chief Nurse at Norfolk Naval Hospital in 1909 and the second Superintendent of the Corps in 1911.  Higbee led the Nurse Corps through not only World War I, but the Spanish Influenza epidemic.  Higbee was one of four Navy Nurses to be awarded the Navy Cross in 1920, however, the other three were victims of the flu  and honored posthumously.  Higbee retired from the Navy in 1922 and passed away in Winter Park, Florida on 10 January 1941.  Her remains were interred in Arlington National Cemetery.