Biography compiled by the staff of the Naval History & Heritage Command. 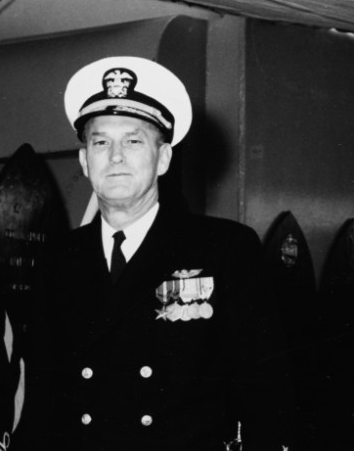 Admiral David L. McDonald successfully managed the Navy during the first years of heavy combat in the Vietnam War.

David L. McDonald was born in Maysville, Georgia, and graduated from the U.S. Naval Academy in 1928. His early service as a naval aviator included duty on USS Mississippi, USS Colorado, USS Saratoga, and USS Detroit. During World War II he completed assignments with Commander Aircraft, Atlantic Fleet and Commander Naval Air Operational Training Command. After the war he served on the staffs of Commander Air Force, US Pacific Fleet, and Commander in Chief, U.S. Pacific Fleet. He commanded USS Mindoro and later aircraft carrier USS Coral Sea. Subsequent assignments included duty with the Director, Air Warfare in the Office of the Chief of Naval Operations. Thereafter, he served as the Deputy to the Assistant Chief of Staff, Supreme Headquarters, Allied Powers, Europe. In 1960 he took command of the Sixth Fleet and Naval Striking and Support Forces, Southern Europe. Convinced of his superior leadership skills, in 1963 the Navy named him Commander in Chief, Naval Forces, Europe. He took the reins as Chief of Naval Operations when the confrontation in Southeast Asia was heating up and oversaw deployment of SEAL and other US naval forces to the embattled region. McDonald ensured that the Navy provided the Seventh Fleet with the Sailors, Marines, ships, aircraft, and supplies it needed to fight the major war for Vietnam in the critical early years of the conflict.