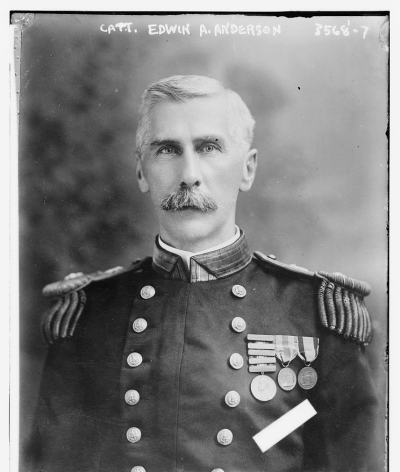 Rear Admiral Edwin Anderson served in the U.S. Navy with distinction for forty-years, earning recognition for bravery under fire during the Spanish-American War and the Vera Cruz landings (Medal of Honor). During World War I, he commanded Patrol Squadron One, Patrol Detachment, Atlantic Fleet with USS Tallapoosa (Coast Guard Cutter) as his flagship.  Anderson graduated from the Naval Academy 1882.  At the outbreak of the Spanish-American War, Anderson was a lieutenant (jg.) aboard USS Marblehead (Cruiser No. 11).  Anderson commanded a detachment of boats launched from Marblehead on 11 May 1898 to cut Spanish underwater communication cable off Cienfuegos, Cuba.  Anderson successfully led his men while under very heavy fire and was advanced in grade for promotion for his heroism.  Anderson advanced to the rank of commander in the decade following the Spanish-American War serving at sea and on shore.  He was commissioned Captain in June 1911 and commanded USS Iowa (Battleship No. 4) and USS New Hampshire (Battleship No. 25) successively.  He was awarded the Congressional Medal of Honor while aboard the former for gallantry during the Vera Cruz landings on 22 April 1914.  Anderson commanded Squadron 2, Patrol Force when the United States entered the Great War.  He was promoted to Rear Admiral and took command of Patrol Squadron One, Patrol Detachment, Atlantic Fleet in July 1917.  He was awarded a Distinguished Service Medal for his World War I service.  Anderson was promoted to Admiral in June 1922 and became Commander in Chief, Asiatic Fleet through August 1923.  He served in the Office of the Chief of Naval Operations until his retirement in March 1924.  Anderson died at his Wilmington, NC home on 23 September 1933 and was buried in Arlington National Cemetery.

The USS Anderson (DD-411), named in his honor, was sunk in 1946 during atomic bomb tests as part of Operation Crossroads.