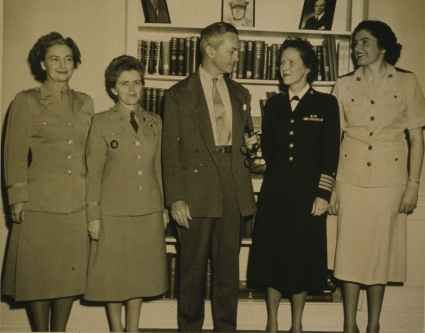 As a Yeoman (F), First Class, U. S. Naval Reserve Force, in 1918, during the first World War, she was on duty at the New York Shipbuilding Corporation yards at Camden, New Jersey, and later as Chief Yeoman, she was attached to the U. S. Naval Air Station, Cape May, New Jersey.  She was mustered out of the service in September 1919, and subsequently became a civilian employee at the Naval Air Station, Lakehurst, New Jersey.

From 1934 until the fall of 1942 she was civilian head of the Editorial and Research Section, Bureau of Aeronautics, Navy Department, and Special Assistant to the Chief of that Bureau.  On October 15, 1942, she was commissioned Lieutenant, Women’s Reserve, U. S. Naval Reserve and was promoted to the rank of Lieutenant Commander on November 26, 1943; to Commander, March 5, 1945; and to Captain, July 26, 1946.  On October 15, 1948 she was one of eight women sworn into the regular Navy, under the Women’s Armed Service Integration Act of 1948.

“…Discharging with zeal, leadership and judgment her many responsibilities, Commander Hancock assumed an important role in the development, expansion and administration of the comprehensive program designed to integrate women in the Naval Service and utilize their various skills.  Maintain close liaison with the office of the Director of the Women’s Reserve, she aided in formulating policies governing the Women’s Reserve…Her recommendation concerning living standards and working conditions of Naval shore establishments in this country and Hawaii were essential factors in the increased efficiency of Women’s Reserve members in these activities…”

On February 24, 1946 she was assigned duty as Assistant Director (Plans) of the Women’s Reserve, and on July 26, of that year assumed the duties of Director.  In October 1948 she was assigned duty as Assistant Chief of Naval Personnel for Women.  As third director of the WAVES, she took a leading part in the preparation and promotion of what eventually became the “Women’s Armed Services Integration Act,” signed by the President on June 12, 1948.  Unlike the other services, the Navy does not maintain a separate Women’s Corps, but women are integrated directly into the various components of the service, receiving the same pay and privileges as men, but may be assigned shore duty only, being in eligible for sea duty and combat flying.

She officially served as “advisor on women’s affairs,” and less technically as a key figure in the activation of a total force of 500 officers, 50 warrant officers, and 6,000 enlisted women in the Navy by June 1950.  She was transferred to the retired list of the U. S. Navy, effective June 1, 1953, and was awarded the Legion of Merit “For exceptionally meritorious conduct…as Director of the Women’s Reserve of the Naval Reserve from July 1946 to October 1948, and as Assistant Chief of Naval Personnel for Women from October 1948 to June 1953…” The citation continues in part:

“Exercising organizational and administrative ability of the highest caliber, Captain Hancock served with distinction throughout the transition period in which women became a regular component of the United States Navy and was eminently successful in initiating the basic plans and in overcoming the many varied and complex problems which confronted her during the inaugural stages incident to establishing the women as an integral part of the naval service…She was directly instrumental in the formulation of plans and policies affecting the selection and training of the women, together with their utilization, administration, welfare and housing.  Skillfully welding the personnel under her leadership into a high efficient unit, she maintained a coordinated and effective command and contributed immeasurably to the success achieved by women in the various fields to which they were assigned throughout the naval service…”

She is a member of the American Legion, the Wildwood (New Jersey) Yacht Club, and the National Council of Navy League.  One brother is a Commander U. S. Naval Reserve, and one is a Captain, U.S.N.  A sister was an officer in the Women’s Army Corps.

Captain Hancock has been thrice married.  Her first and second husbands, both Naval Aviators, died in the crash of the dirigibles in which they were serving.  Her first husband, Lieutenant Charles Gray Little, recipient of the Navy Cross, was killed when the ZR-2 crashed over the Humber River, England in August 1921; and her second, Lieutenant Commander Lewis Hancock, Jr., lighter-than-air pilot and holder of the Navy Cross for World War I submarine service, was killed in the crash of the USS Shenandoah (ZR-1) in Ohio on September 3, 1925.  Her last husband, Vice Admiral Ralph A. Ofstie, USN, also a Naval Aviator, and much decorated, whom she married after he retirement, died in November 1956 at the U. S. Naval Hospital, Bethesda, Maryland.

Captain Hancock has contributed many articles on aviation and related subjects to Our Navy, Flying and Popular Aviation, Aero Digest, Popular Mechanics, Sportsman Pilot, and other publications.