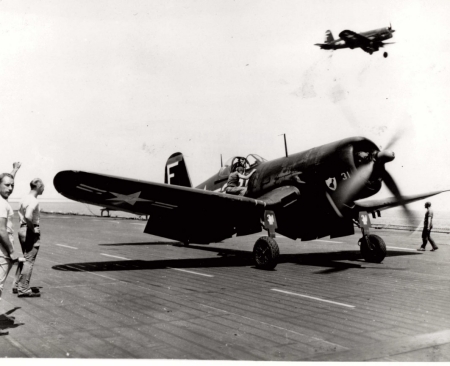 Alan Bartlett Shepard, Jr., was born in East Derry, New Hampshire, on November 18, 1923, son of Colonel Alan B. Shepard, US, Retired and Mrs. (Renza Emerson) Shepard.  He graduated from Pinkerton Academy, in Derry, and attended Admiral Farragut Academy, Pine Beach, New Jersey, for one year prior to entering the U. S. Naval Academy, Annapolis, Maryland, on appointment from his native state in 1941.  Graduated with the Class of 1945 and commissioned Ensign in the U. S. Navy on June 7, 1944 (course of introduction accelerated due to war emergency), he subsequently advanced in rank, attaining that of Read Admiral, to date from December 1, 1971.  He is the first astronaut to receive flag rank.

Following graduation from the Naval Academy in June 1944, he had a brief assignment at the naval Air Station, Jacksonville, Florida, before reporting in August 1944 for duty on board the USS Cogswell (DD-561).  While attached to that destroyer, he participated in World War II operations in the Western Caroline Islands and at Leyte, Luzon, and Okinawa Gunto, and in the THIRD Fleet raids on Japan.  Detached from the Cogswell in October 1945, he had flight training at the Naval Air Stations at Corpus Christi, Texas, and Pensacola, Florida.

Designated Naval Aviator in March 1947, he served as an Instructor at the Naval Auxiliary Air Station, Cecil Field, Jacksonville, Florida, and between July and September 1947 had similar duty with the Fleet Airborne Electronics Training Unit at the Naval Air Station, Norfolk, Virginia.  After a brief assignment with Fighter Squadron FOUR-B, he joined Fighter Squadron FORTY-TWO in February 1948, both squadrons operating in the Mediterranean Area.

He had test pilot training at the Naval Air Test Center, Patuxent River, Maryland, remaining there for duty from January 1951 until July 1957 interspersed with service from February 1953 to October 1955 as Operations Officer of Fighter Squadron ONE HUNDRED NINEY THREE, a night fighter unit flying Banshee jets based at Moffett Field, California.  As Operations Officer of that squadron he had two cruises to the Western Pacific, while the Unit was based on the aircraft carrier USS Oriskany (CV-34).  During his assignments at the Naval Air Test Center, Patuxent, he took part in high altitude tests to obtain data on light at different altitudes and in a variety of air masses over the North American Continent.  He took part in experiments in test and development of the Navy’s first in-flight refueling system; carrier suitability trials of the F2H3 Banshee and Navy trails of the first angled carrier deck. He was engaged in the test of the F3H Demon, F8U Crusader, F4D Skyray, F11F Tigercat, and was Project Test Pilot on the F5D Skylancer.

From July 1957 until June 1958 he attended the Naval War College, Rhode Island, after which he served as Aircraft Readiness Officer on the Staff of the Commander in Chief, U. S. Atlantic Fleet.  In April 1959 he was one of seven military test pilots selected by the National Aeronautics and Space Administration to participate in Project Mercury, the United States’ Manned Satellite Program, and was assigned to the Langley Research Center, Langley Air Force Base, Virginia, for preliminary man-in-space flight training and instruction.

In February 1961 he was selected as one of the three of the seven Astronauts to being final training for the first flight into space, the others being then Lieutenant Colonel John Glenn, USMC, and Captain Virgil Grissom, USAF.  He was identified as the Mercury Astronaut to attempt the flight from Cape Canaveral, Florida on May 2, 1961, but due to weather conditions the flight was postponed.  On May 5, 1961, in a Mercury spacecraft, he was hurled 115 miles into space at a speed of 5100 miles an hour.  The perfect flight, from lift-off to splash-down lasted only fifteen minutes, during which Rear Admiral Shepard talked to his ground operations control center, while controlling the space capsule manually.  He and the capsule were recovered by helicopter and landed on the deck of the USS Lake Champlain (CV-39), his condition excellent in every way.

Rear Admiral Shepard was given a “hero’s welcome” in Washington, D. C., on May 8, 1961 and met with the President and Mrs. Kennedy at the White House, during which President Kennedy presented to him the National Aeronautics and Space Administration’s Distinguished Service Medal “for outstanding contributions to space technology.” The citation further states:  “His flight as the first United States Astronaut was an outstanding contribution to the advancement of human knowledge of space technology and a demonstration of man’s capabilities in suborbital space flights.”  Rear Admiral Shepard rode with his wife, Louise, in a parade to the Capitol, followed by the six other astronauts.  Welcomed by members of Congress, they later were interviewed by the Press at the State Department, the entire ceremony shared by the Nation and the world on television and radio.  He was also awarded the Distinguished Flying Cross and cited as follows:

“For heroism and extraordinary achievement…as an Astronaut with NASA on May 5, 1961.  As  America’s first man in space, Captain (then Commander) Shepard, aboard Freedom 7, was in flight fifteen minutes and twenty-two seconds and was weightless only a third of that time.  In the light of later American space accomplishments, the Flight of Freedom 7 was impressive for its benchmark of technical excellence in the new technology of manned space flight and its hallmark of open media reporting…”

He continued to serve with the National Aeronautics and Space Administration and in March 1969 became Chief of the Astronaut Office, where he monitored the overall activities of a team of forty-nine astronauts.  Specifically, he was responsible for: developing flight crew training programs; providing flight crews for NASA manned space flights in the Gemini and Apollo programs; furnishing pilot input to the design and development of spacecraft and spacecraft operations.  He was also responsible for: providing engineering and scientific contributions in the areas of operational procedures; and provided flight crew familiarization with, and a coordinated support effort of NASA-MSC advanced scientific and technical programs for progressing manned space flight as an outgrowth of current programs.

He was Commander of the Apollo XIV Lunar Landing Crew, which with Lieutenant Colonel (then Major) Stuart Roosa, USAF as module pilot and Captain (then Commander) Edgar D. Mitchell, USN, blasted off from Cape Kennedy, Florida, on January 31, 1971.  The landed successfully at Fra Mauro, on February 4, 1971 and remained there for 33.5 hours.  During that time, Captains Mitchell and Shepard participated in two moon walks of a little over four hours each.  Splash down was on February 9, 800 miles south of Soma.  They were successfully picked up by helicopter and returned to the recovery ship USS New Orleans.  He was awarded the National Aeronautics and Space Administration’s Distinguished Service Medal.

Rear Admiral Shepard had logged more than 4,300 hours flying time, 2,500 hours of which were in jet aircraft.

He was a member of the Society of Experimental Test Pilots, the Rotary, the Kiwanis the Mayflower Society, and the Order of the Cincinnati.  In 1971 he received an honorary degree from Miami University of Ohio.