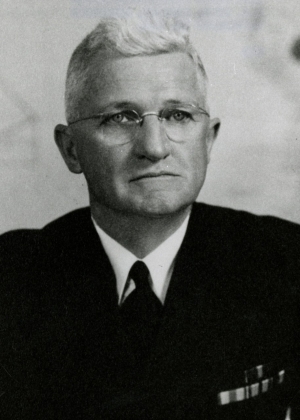 Born in Wilkes-Barre, Pennsylvania, Harold R. Stark graduated from the U.S. Naval Academy in 1903. During World War I, he served on the staff of Commander U.S. Naval Forces, Europe. As a captain after the war, he served as Chief of Staff to Commander Destroyer Squadrons, Battle Fleet, and Aide to the Secretary of the Navy. After achieving flag rank, he became the Chief of the Bureau of Ordnance, followed by tours as cruiser division commander and cruiser battle force commander. As CNO, Admiral Stark laid the basis for strategic coordination with the British in World War II. He implemented a neutrality patrol covering the entire eastern seaboard of North America. In 1940, he won congressional approval for a “two-ocean Navy” and authored the document that set America’s Europe-first strategy of World War II. He executed the “Destroyers for Bases” agreement to aid Britain against German U-boats and to provide the U.S. with a chain of bases in the Atlantic. In March 1942, following his tour as CNO, Stark was appointed Commander U.S. Naval Forces, Europe and oversaw U.S. naval participation in the D-Day invasion of Normandy. USS Stark (FFG-31) was commissioned in his honor.