Victory in the Pacific: Japan's Surrender and Aftermath 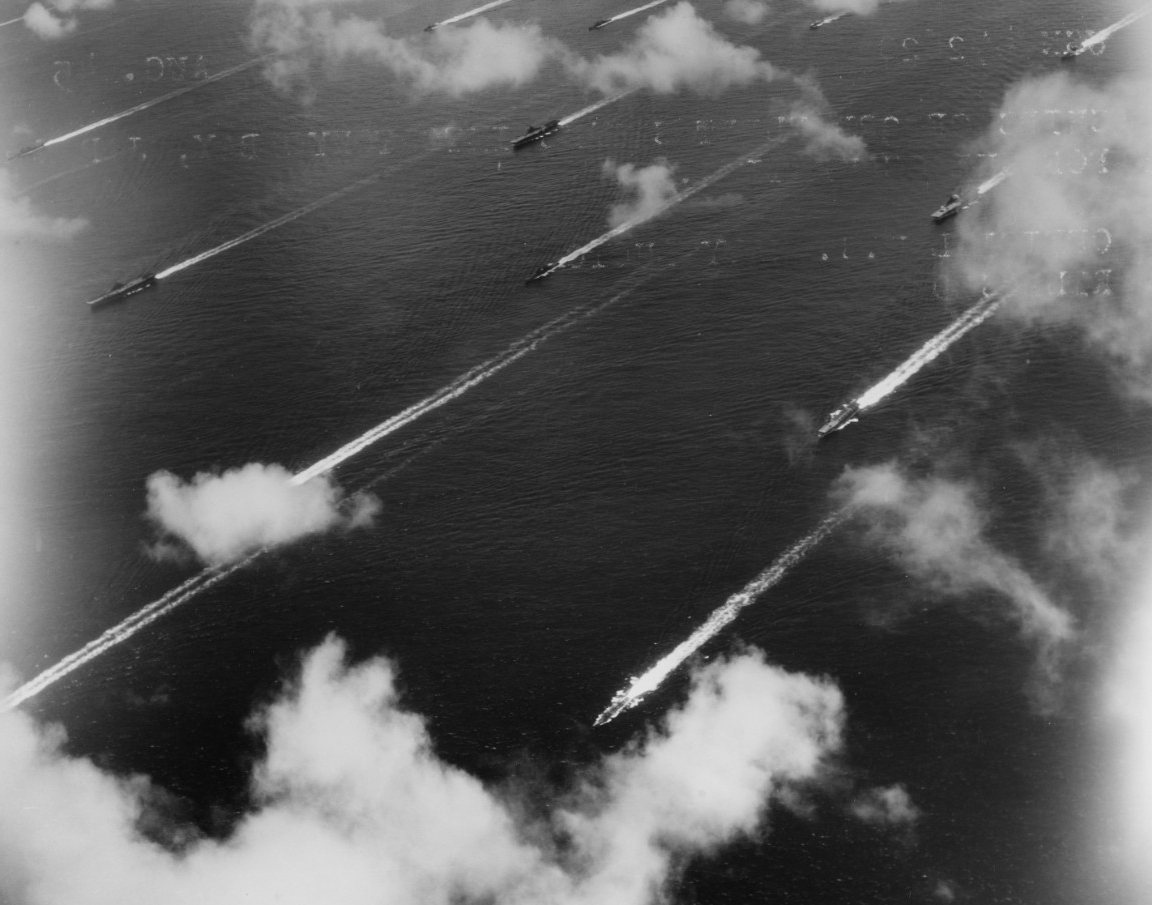 The spring of 1945 found the Japanese Empire in a desperate situation. The successful U.S. invasions of Iwo Jima in February and Okinawa in April had brought the Pacific War to the Japanese Home Islands’ doorsteps. Devastating air raids (alone the first firebombing raid on Tokyo during the night of 9/10 March 1945 claimed an estimated 100,000 lives) had razed the interconnected industrial/residential districts of most urban areas. The U.S. Navy’s highly effective submarine blockade, as well as the joint Navy–Army Air Forces aerial mining campaign, had brought about rapidly increasing shortages of food, fuel, and strategic materials that left both the Japanese military and civilian populace in dire straits. The Imperial Navy no longer had enough fuel reserves to go to sea and many ships had been relegated to the role of portside antiaircraft platforms. Strict conservation of available aviation fuel grounded most of Japan’s still considerable numbers of combat aircraft. Moreover, the Soviet Union had refused to renew its neutrality pact with Japan. Although the Japanese did their utmost to forestall immediate conflict with USSR, the country’s possessions on the Asian mainland (Manchuria and Korea) and the maritime territories to the north of the Home Islands were now vulnerable to a daunting potential foe.

These circumstances strongly pointed toward defeat and destruction. Secret assessments that Japan would not survive another year of war circulated in the highest Japanese government circles and it was clearly realized that the Home Islands would likely be invaded before the end of 1945. However, the country’s leadership remained divided over immediate courses of action at this juncture, with the emperor and a minority of his closest advisers from the Supreme Council for the Direction of War (the “Big Six”) tending to favor a peace agreement negotiated via the still-neutral USSR or other nonbelligerant nation and, on the other extreme, much of the Imperial Army’s leadership vowing to fight to the end. Overall, however, the humiliation of de facto surrender and the possible abdication of the emperor and the abolition of imperial reign still appeared impossible to accept.

Paradoxically, the Japanese Imperial Headquarters formulated a guardedly positive assessment of the immediate strategic picture: Allied—specifically American—war fatigue would preclude protracted blockade and aerial bombardment and had the potential to lead to a negotiated settlement. If Allied forces did, in fact, invade the Home Islands and the initial assault could be repulsed or made too costly for Western governments to bear, Japan would still be able to retain its honor. This view led to the formulation of a master defense plan (Ketsu-Go—“Decisive” Operation), which was completed in early April. Due to Japan’s geography, it was relatively easy to predict Allied landing areas. Ketsu-Go focused on these, with special emphasis on the Tokyo–Kanto Plain area and on the southern island of Kyushu, where the initial landings were expected.

Allied war aims in regard to Japan, which were reiterated at numerious strategic planning conferences, had one goal: the enemy’s unconditional surrender. Clarity about the debate within the Japanese leadership continued to elude the West despite excellent intelligence derived from intercepts of encoded Japanese diplomatic and military message traffic (Magic and Ultra). Thus, the worst-case scenario—that of an unyielding foe who would fight to the death—had to be assumed and the invasion of the Home Islands planned. This view was reinforced by the extremely fierce fighting and correspondingly heavy losses experienced during the Battle of Okinawa and concurrent mass kamikaze attacks on Allied shipping.

In preparation for the invasion of Japan, the U.S. Navy drew on some aspects of the pre-war War Plan Orange, which envisioned a steady Pacific advance leading to blockade and bombardment of the Home Islands. In contrast, the Army developed plans for an actual invasion. Into early 1945, inter-service disagreements over the varying approaches slowed integration of the Navy and Army concepts into a unified planning effort. On 25 May, just over two weeks after the surrender of Germany, the Joint Chiefs of Staff issued the general invasion order, leaving details to Army and Navy theater commanders. General Douglas MacArthur, Southwest Pacific Area supreme commander, submitted a more specific plan—which included input from Admiral Chester W. Nimitz, Jr., Pacific Ocean Areas commander in chief—on 28 May. The dual-phase Operation Downfall was to encompass an amphibious assault on the southwestern Home Island of Kyushu (Operation Olympic, November 1945), eventually followed by landings directly in the Tokyo–Kanto Plain area on Honshu (Operation Coronet, spring 1946). Although the latter operation was touted as a “knock-out blow” to Japan, planning assumptions explicitly did not exclude the possibility of fighting dragging into 1947. Moreover, Downfall would require redeployment of forces previously engaged in the European Theater. However, coupled with varying estimates of the large—even disastrous—numbers of expected Allied military and Japanese military and civilian casualties, indications of war weariness among the Allies made the defeat of Japan imperative within a twelve-month time frame.

The primary subsequent events, which ultimately led to the Japanese surrender on 14 August, unfolded as follows:

Correspondence between Sailors and their families (from the personal papers of James Wright and Charles W. "Bill" Cooper, two Sailors who served in the Pacific during World War II)

Tokyo Bay: The Formal Surrender of the Empire of Japan, USS Missouri, 2 September 1945

Extract: The Formal Surrender on the Empire of Japan, Report on Surrender and Occupation of Japan by Commander in Chief, Pacific Fleet and Pacific Ocean Areas (11 February 1946) 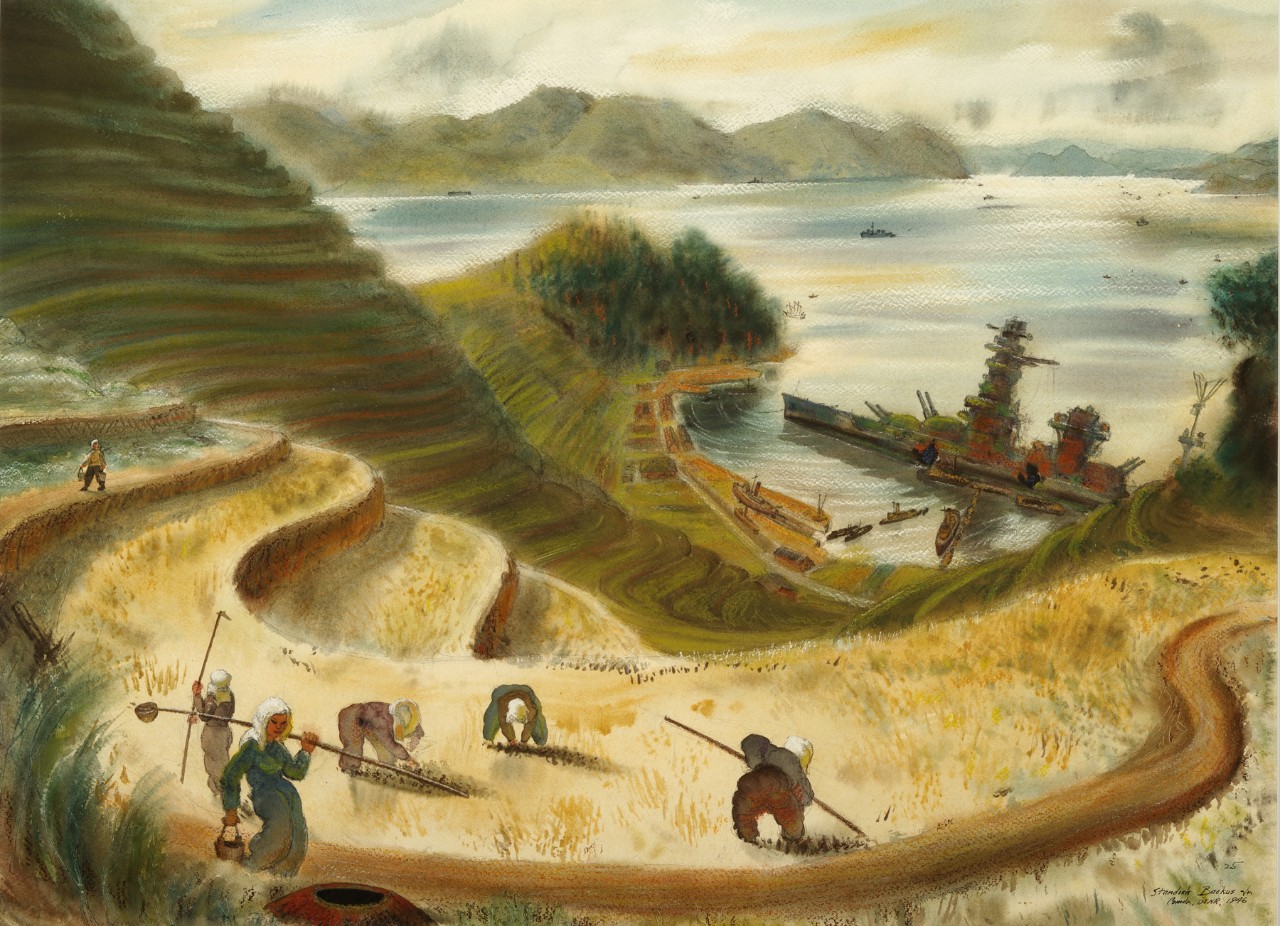 "Ise Was Hyuga's Sister," painting, watercolor on paper, by Standish Backus, 1946. View of the wreck of the Japanese battleship Ise at Kure, Japan: "Torn and seared she seemed a part of the rugged upheaved terrain—and the handy rice workers would gaze out over her—perhaps toward distant Hiroshima. Then they would turn again to their task, night soil had to be spread, the crops reaped" (88-186-AL).

Image Gallery: Victory in the Pacific 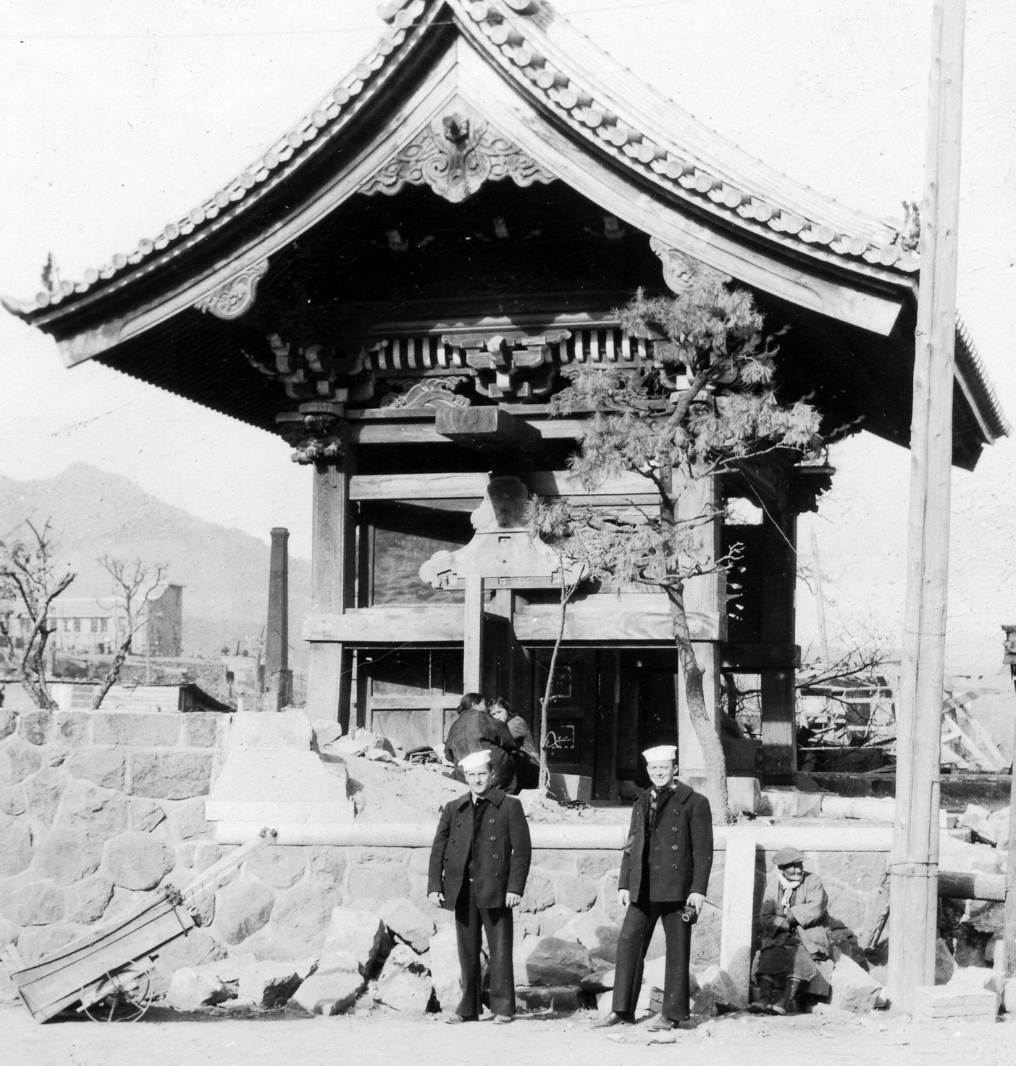