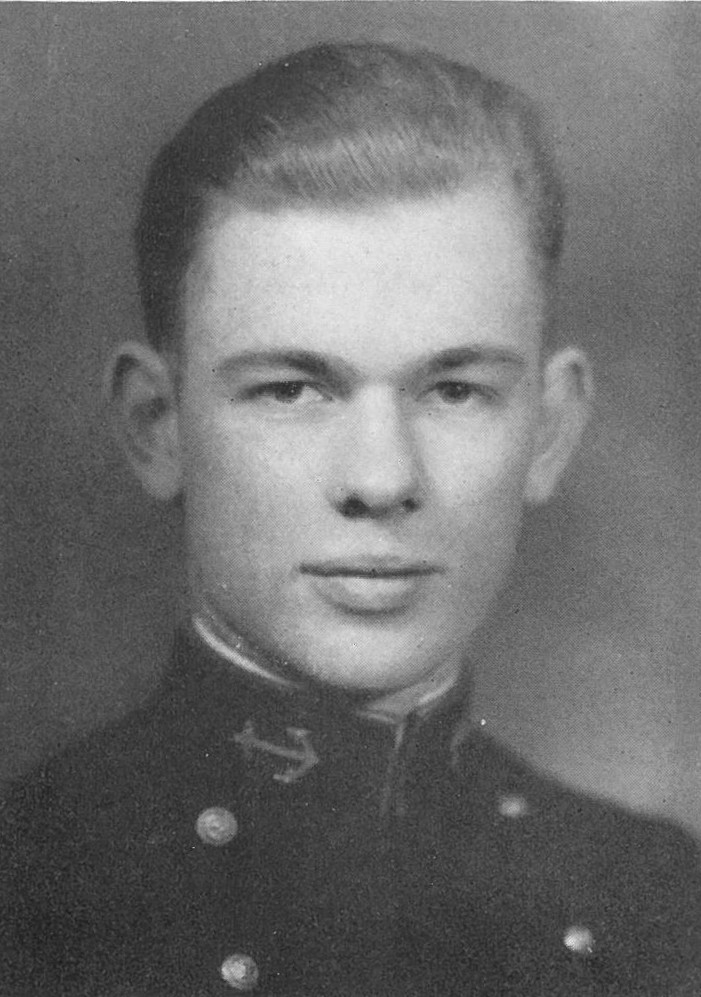 Richard H. Best as a midshipman, 1932 (from Lucky Bag of the Service: The Annual of the Regiment of Midshipmen [Annapolis, MD: U.S. Naval Academy, 1932]). Click to download.

Best was born on 24 March 1910 in Bayonne, New Jersey, and entered the U.S. Naval Academy in Annapolis, Maryland, directly after high school. At the Academy, Best proved to be a conscientious student and graduated with honors in 1932.

Best’s next stop was USS Richmond (CL-9), on which he served for two years. In 1934, Best began flight training in Pensacola, Florida. After earning his wings, he was assigned to Fighting Squadron 2 (VF-2B) on USS Lexington (CV-2). In 1938, Best returned to Pensacola as a flight instructor with Training Squadron 5 (VT-5). In 1940, he was assigned to the SBD Dauntless–equipped Bombing Squadron 6 (VB-6) on USS Enterprise (CV-6), with which he took part in the U.S. Navy’s early carrier raids on the Japanese-occupied Marshall Islands in February 1942.

At the Battle of Midway, Best, now a lieutenant, commanded VB-6, which contributed to the sinking of the Japanese carriers Akagi and Hiryu. Eyewitnesses reported that Best himself delivered Akagi’s death blow on 4 June—a bomb that pierced the carrier’s flight deck and exploded in the upper hangar. Later, Best may have delivered one of the bombs that fatally damaged Hiryu. He was awarded both the Navy Cross and Distinguished Flying Cross for his actions during the battle. Best may be the first U.S. naval aviator to score hits on two carriers in one day.

The Battle of Midway gave Best the chance to distinguish himself, yet it also caused injuries that would limit his future career. During his squadron’s first sortie, Best received a defective oxygen canister that had him breathing oxygen mixed with sodium hydroxide, which severely burned his respiratory tract.

In convalescence afterward, Best reported, “I knew my career was dead.” Indeed, Best spent 32 months in hospitals and was discharged from the Navy in 1944. His lungs never recovered entirely.

Nevertheless, Best found a way to satisfy his lifelong passion for aviation by taking a job at the Douglas Aircraft Corporation after the war. He retired from the Rand Corporation, of which Douglas had become a division, in 1975. Best passed away on 28 October 2001 and was buried at Arlington National Cemetery.