Defeating the Sharks: The Capture of U-505 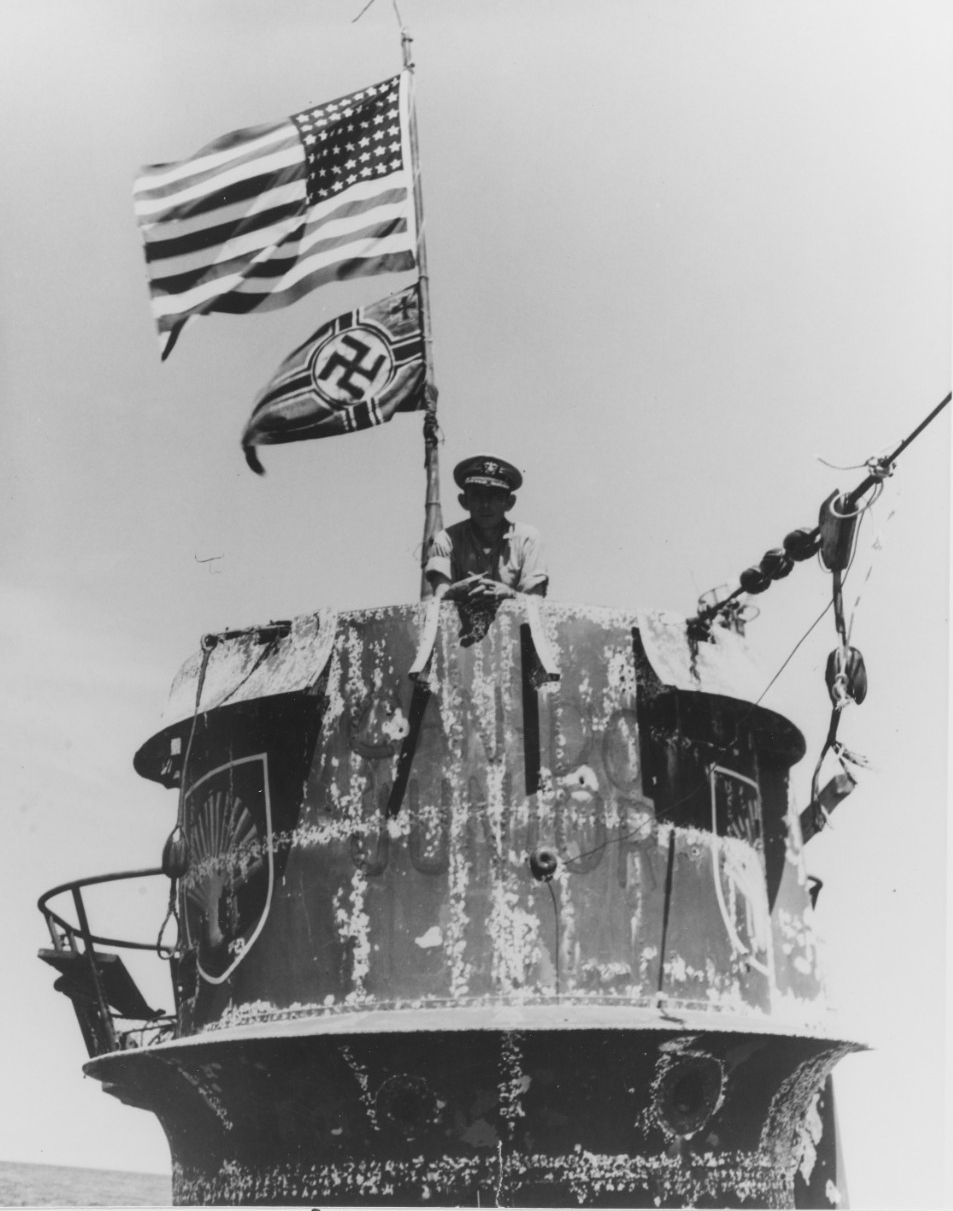 Captain Daniel V. Gallery, commanding officer of USS Guadalcanal (CVE-60), on the bridge of his prize, U-505, prior to the boat being taken in tow by his escort carrier. Note the submarine's emblem (scallop shell) and the large U.S. flag flying over the German naval ensign (80-G-49176).

On 4 June 1944, a U.S. Navy hunter-killer group organized around USS Guadalcanal (CVE-60) captured the German Type IXC submarine U-505. This was the first time that the U.S. Navy had captured an enemy vessel at sea since the 19th century.

The action took place in the Atlantic, approximately 150 miles off the coast of Rio De Oro in Western Sahara, Africa. U-505 was detected by sonar and, after depth-charge attacks by Chatelain in which the submarine’s rudder was jammed, its auxiliary rudder controls disabled, and aft compartments were flooded, the boat surfaced and was taken under naval gunfire. Convinced that the submarine was about to sink, the commanding officer, Oberleutnant zur See (Lieutenant) Harald Lange, ordered his crew to abandon ship, during which the standard scuttling procedures were only partially carried out. As its crew was being picked up, U-505 was boarded by U.S. Navy personnel from Pillsbury led by Lieutenant Junior Grade Albert L. David, who secured sensitive materials and succeeded in closing scuttling valves and disarming scuttling charges (David was later awarded the Medal of Honor for the intrepidity and gallantry of his actions). Flooding was contained and the submarine’s diesel engines shut down. U-505 was taken into tow and, after a concerted damage control effort that eventually succeeded in recharging the boat’s batteries and bringing it to its proper trim, was brought into Bermuda on 19 June.

Despite the immense intelligence value of the recovered classified publications, codebooks, an Enigma cipher machine with up-to-date cipher rotors, and communications equipment, the relatively visible salvage of the submarine was controversial within U.S. Navy circles at the time. U-505 was one of six U-boats captured by the Allies during World War II. Any indication to the Germans that any of their submarines had been captured rather than lost would have set back or even negated vital Allied codebreaking activities.

After the war and following many detours, U-505 eventually found its final resting place at the Chicago Museum of Science and Industry, where the boat was painstakingly restored. It was designated a National Historic Landmark in 1989 and is one of only two Type IXC U-boats still in existence.

Other NHHC U-505 Resources

Imagery of U-505's Capture and Salvage

Documents Captured on U-505

NHHC Battle of the Atlantic Links

Battle of the Atlantic: Countering the U-Boat Threat and Supplying the Allies

Battle of the Atlantic—Continued: The Establishment of Tenth Fleet and Focus on Antisubmarine Warfare