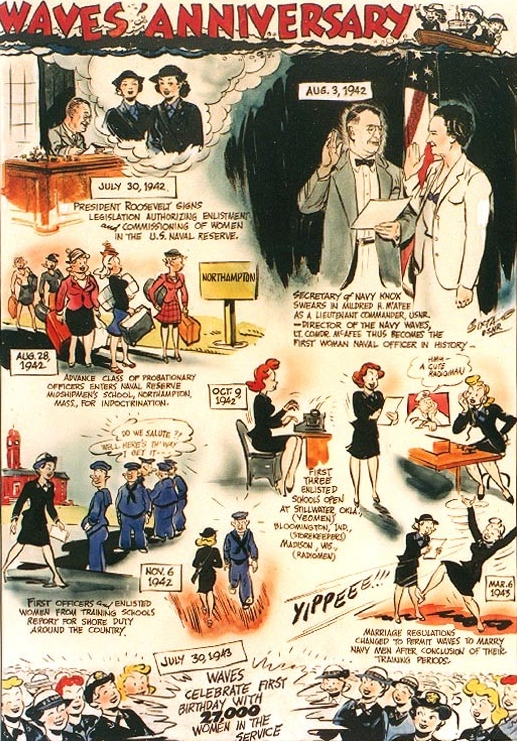 Test Your knowledge on the history of the WAVES! Afterward, find the answers at the bottom of the page.

2.      The Office of Naval Intelligence screened for qualified WAVES officer candidates during their initial training.

3.      WAVES served for the duration of the war plus six months.

4.      The Navy officially used the term WAVES to refer to women outside of the Nurse Corps for more than 30 years.

5.      WAVES did jobs they should not have been assigned.

6.      The aviation training was co-educational.

7.      The Navy did not discriminate against or segregate black WAVES.

9.      It is okay to drop the S from the acronym WAVES if referring to an individual.

10.    WAVES describe their WWII service as the third most important event in their lives-second only to marriage and motherhood.

11.    WAVES did everything in the Navy but serve at sea.

12.    Many opposing the WWII women reserve programs became their advocates by the war’s end.

18.    WAVES excelled in the math and science oriented specialties. 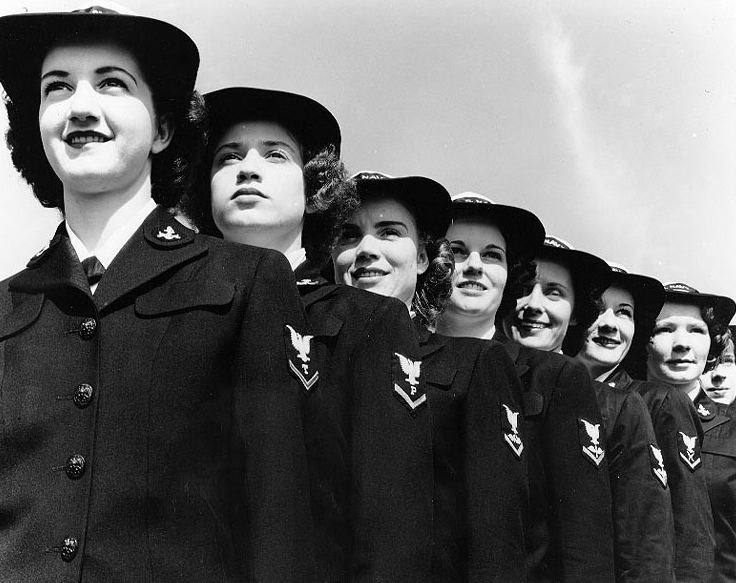 2A:   True. They recruited the candidates who showed the most potential for intelligence work.

3A:   True. In accordance with Public Law 689 creating the women’s reserve program.

5A:   True. The Navy required parachute riggers to test their own chutes.  WAVES were not allowed to do so, yet several had this job.  Several of them defied the restriction and tested their chutes.

6A:   True. Thanks to the progressive and practical thinking of Joy Bright Hancock, the Bureau of Aeronautics liaison to the WAVES. She insisted that if the WAVES were going to maintain or repair planes, they should be comfortable with the male pilots and plane crews.

7A:   True. The Navy asked WAVES attempting to mistreat them to accept the new policy or to leave.

9A:   False. Doing so changes the meaning of the acronym.

11A:   True. Little Navy business was conducted without encountering a WAVES.

12A:   True. Chester Nimitz opposed having WAVES in Hawaii. He later testified before congress on the worth of having women in the peace time Navy.

13A:   True. When barracks were not available, the Navy placed them in nearby apartments or dormitories.

14A:   True. Disbursement officers, couriers, and other regular duties required them to board ships.

15A:   True. The Navy graduated a number of WAVES from this program.

16A:   True. Representatives of all the services including the women’s reserves (Army WAC, Navy WAVES, Women Marines, and Coast Guard SPARS) participated.

17A:   True. She did so in WWI when her husband was the Assistant Secretary of the Navy and during WWII when he was the president.

WAVES Recruiting Poster, “The WAVES need you,” showing an image of a woman pointing. Poster issued August 1944. See NH 93995 for information on the model in the photo. Collections of Naval Historical Foundation (photo only) (NH 77246).

Read The WAVES' 75th Birthday essay for more information on the history of the WAVES.