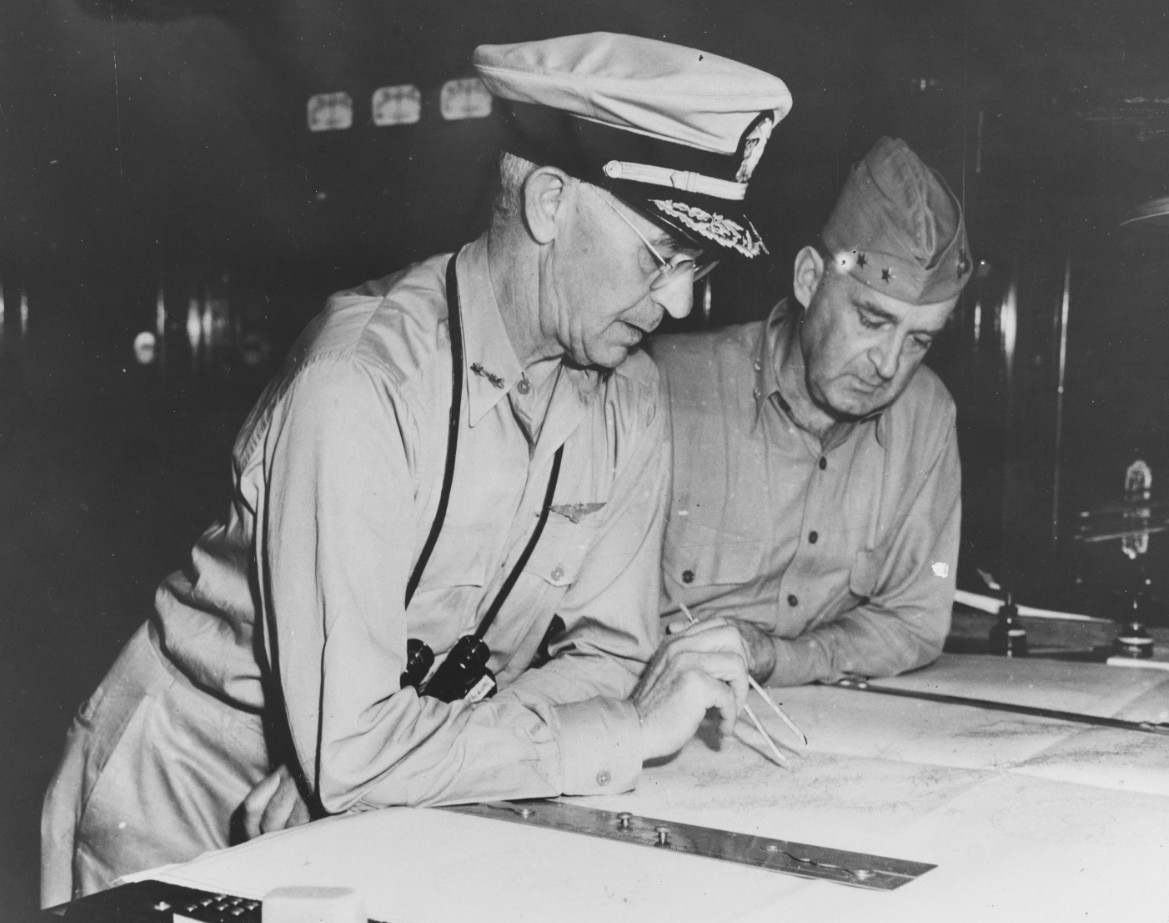 Rear Admiral Richmond Kelly Turner, commander of Task Force 61 (left), and Major General A. A. Vandegrift, USMC, commander of the 1st Marine Division, working on the flag bridge of USS McCawley (AP-10), at the time of the Guadalcanal-Tulagi landings (Operation Watchtower), August 1942 (80-CF-112-4-63).

The 7–8 August 1942 landings on the eastern Solomons islands of Guadalcanal and Tulagi were the U.S. Navy's first offensive amphibious operation in the Pacific. It was to turn into a six-month-long seesaw campaign that pitted ships and aircraft of the U.S. Navy and ground and air units of the Marine Corps and Army against tenacious Japanese resistance by land and sea. As we progress through the 75th anniversary campaign milestones, the respective pages will be populated on a rolling basis with Naval History and Heritage Command historians' essays, primary-source documents, and imagery collections.

Eight months after the Pearl Harbor attack, the 1st Marine Division, supported by naval air and gunnery support, landed on Guadalcanal and Tulagi in the eastern Solomons.

In response to the Allied landings on Guadalcanal, the Imperial Japanese Navy undertook a night surface attack on the ships screening the Allied landing force. The battle has come to be identified as the worst defeat in a single fleet action suffered by the United States Navy.

As in the Coral Sea and at Midway, U.S. and Japanese ships never sighted each other during the course of this engagement—all attacks were carried out by carrier-based or shore-based aircraft. It was fought during Operation Ka, the Japanese counteroffensive against Allied landings in the eastern Solomons.

In support of a major ground offensive by the Imperial Japanese Army, Japanese carriers and other large warships were positioned near the southern Solomons in the hope of drawing out, engaging, and decisively defeating Allied naval forces. As U.S. forces fought the Japanese ground offensive to a standstill in the battle for Guadalcanal’s Henderson Field, U.S. and Japanese ships and aircraft confronted each other on the morning of 26 October, just north of the Santa Cruz Islands.

The multiphase Naval Battle of Guadalcanal consisted of a series of destructive air and sea engagements closely related to the continuing Japanese effort to reinforce their ground forces on the island. In early November, the Japanese organized another Guadalcanal convoy, embarking 7,000 troops and their equipment, in another attempt to retake Henderson Field. In conjunction with their troop landings, Japanese naval forces were assigned to bombard Henderson Field in order to destroy U.S. aircraft that posed a threat to the convoy. Ultimately, U.S. naval forces prevented the Japanese bombardment and sank most of the enemy troop transports.

The engagement took place in the waters of Ironbottom Sound off Tassafaronga Point on Guadalcanal’s northern coast. A U.S. Navy task force attempted to surprise and destroy Japanese destroyers dispatched to resupply Japanese ground forces on Guadalcanal. The Japanese were able to inflict heavy damage on the U.S. ships, but were unable to complete their resupply mission, with deleterious effects for their troops on Guadalcanal.

By the end of December 1942, the Japanese Imperial High Command had reluctantly evaluated and accepted recommendations for the evacuation of Japanese forces on Guadalcanal. The evacuation, Operation Ke, was scheduled to begin in late January 1943; the last Japanese were evacuated by a destroyer task force during the night of 7 February. Coupled with the Battle of Midway, the Allied victory on Guadalcanal was likely the turning point of the Pacific War. Japan was now on the defensive.

Sea Services Medal of Honor Recipients from the Guadalcanal Campaign

De Klerk Diary: a 28-page diary donated to the Navy by a Dutch priest, Father Emery De Klerk, who served as a coastwatcher for Allied forces at Tangarare in the Solomon Islands during World War II.

Navy and War Departments (c. 1943), A Pocket Guide to New Guinea and the Solomons