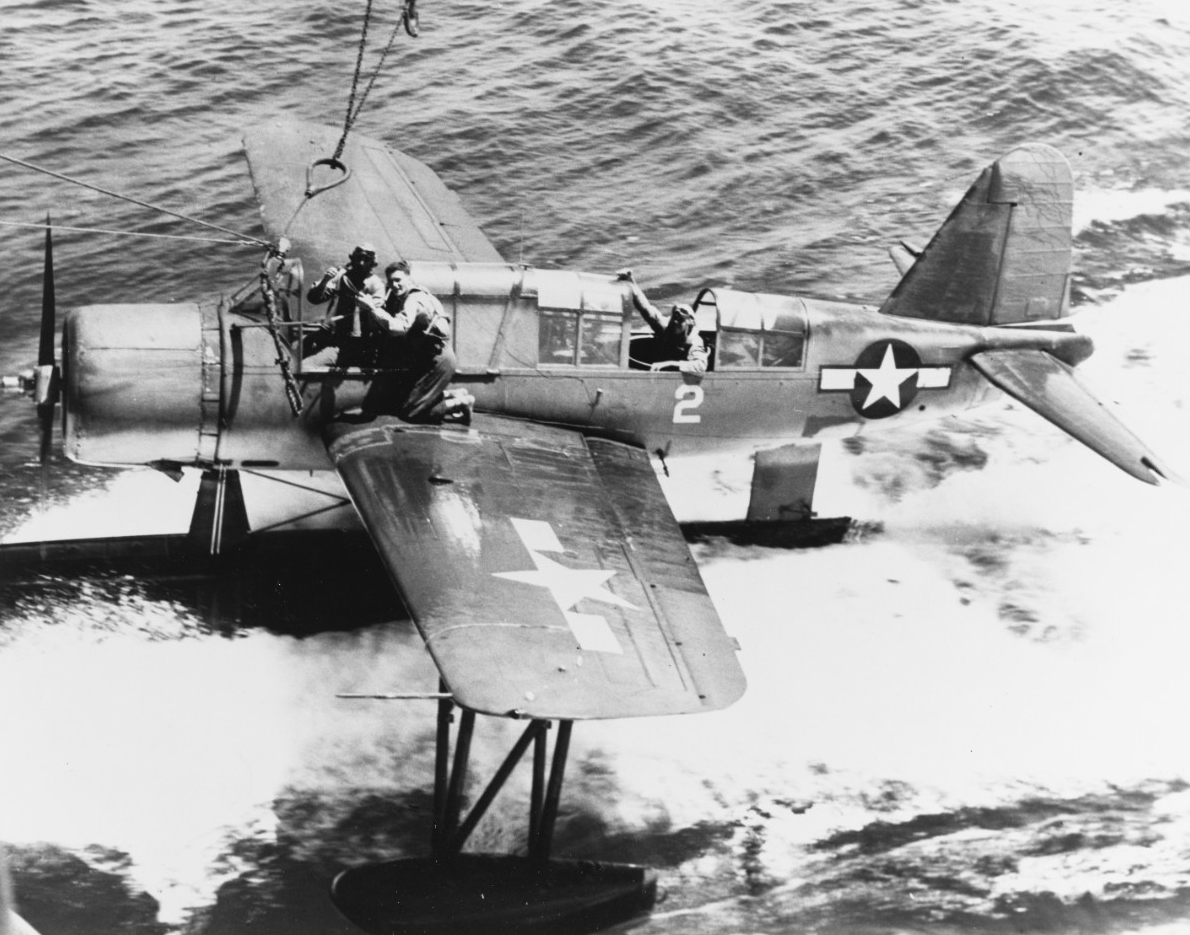 A USS Boston (CA-69) OS2U Kingfisher floatplane returns to the cruiser after rescuing a crewman of a downed TBF bomber, during raids on Japanese targets in the Hollandia area, 21 April 1944 (80-G-283564).

Of the many dangerous and unglamorous assignments during World War II, flying single-engine float planes as part of an aviation detachment onboard a cruiser was particularly grueling duty. Tasked with scouting, search and rescue, and gunfire-spotting missions, the hours were long—especially in an open cockpit—the task technically complicated, and the mission critical. It was also extremely dangerous, as pilots and support crew struggled with salt corrosion, lack of spare parts, tricky water landings, and high-performance enemy fighters.

The wartime exploits of two pilots of the float plane detachment in light cruiser Biloxi (CL 80) illustrate these points perfectly. Ensign Harvey P. Jolly joined the brand new warship for shakedown training in Chesapeake Bay in September 1943. Less than two weeks later, while the warship was enroute to Trinidad, Jolly’s Curtis SO3C Seagull float plane crashed during a landing attempt in rough water off the port beam. Both Jolly and his radioman ACMM John Phagan, survived, but the crash illustrates the daily hazards of aircraft at sea.

After the aviation detachment—as put in their own words—“exchanged four Seagulls and spare parts for two Vought OS2U Kingfishers and no spare parts,” Biloxi sailed for combat operations in early 1944. The float plane pilots spotted for shore bombardment missions—during which they often dodged enemy fighters—flew search and rescue missions, and carried out anti-submarine patrols.

During air strikes off New Guinea on 21 April, Biloxi launched two Kingfishers to search for the crew of a downed dive bomber. Neither found the missing crew, despite Jolly pushing his aircraft to the limit and running out of gas. He made a hazardous water landing and was later picked up by Frazier (DD-607).

On 27 July 1944, Biloxi launched two birds to rescue a pilot sighted in the water just off Yap Island. Lieutenant Junior Grade Robert L. Dana spotted the pilot and landed just outside the reef line. A Japanese anti-aircraft gun took the almost motionless plane under fire, but was quickly silenced by circling American fighters. The downed pilot paddled his raft through the creaking swells, but collapsed from exhaustion on the reef. Dana taxied his aircraft close to the reef and managed to pull the pilot in with a line, saving the man’s life.

Dana had another adventure on 10 October 1944 after picking up a carrier aircraft pilot off Okinawa. Trying to take off in rough seas, his Kingfisher flipped and crashed, spilling the two pilots into the water. They were both rescued by submarine Sterlet (SS-392) and spent the next month on a war patrol, during which Sterlet sank at least two cargo ships.

Both Jolly and Dana illustrated commitment and perseverance, refusing to back down in the face of tough odds. “Mission first, Sailors always.”