“Like a Jockey Riding a Horse”: Kamikaze Attack on USS Isherwood 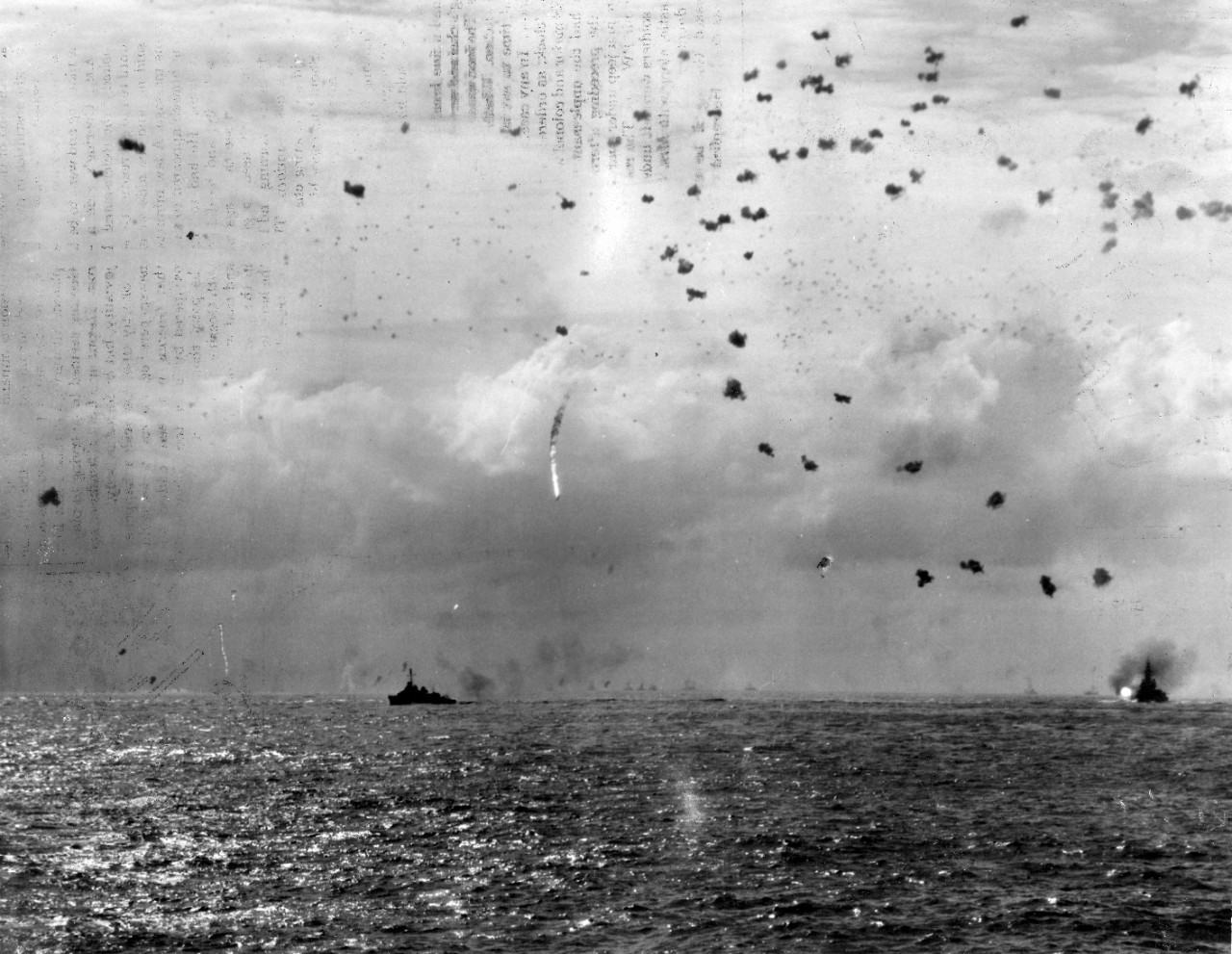 Destroyer Isherwood (DD-520), a veteran of 14 island invasions, arrived off Okinawa on 26 March 1945. She actively participated in the initial pre-landing bombardments off Kerama Retto, remaining on station as troops from Tenth Army stormed ashore on 1 April in the biggest amphibious assault of the Pacific War. Two days later, on 3 April, Isherwood steamed with minesweeper Swallow (AM-65) and landing support craft LCS(L)(3)-15 to a position off the beaches of Ie Shima to provide fire support for ground forces fighting their way inland. The destroyer remained in this role until 16 April, after receiving orders to help fellow destroyers Pringle (DD-477) and Laffey (DD-724) off Ie Shima, both of which had been struck by kamikazes. Steaming to the area where Pringle’s crew were struggling against the currents for their own survival, Isherwood crewmembers helped their fellow “tin can” Sailors onboard. The grim tale of Pringle’s destruction, split in two before sinking, spread quickly around the ship, leaving many of Isherwood’s crewmembers shaken. 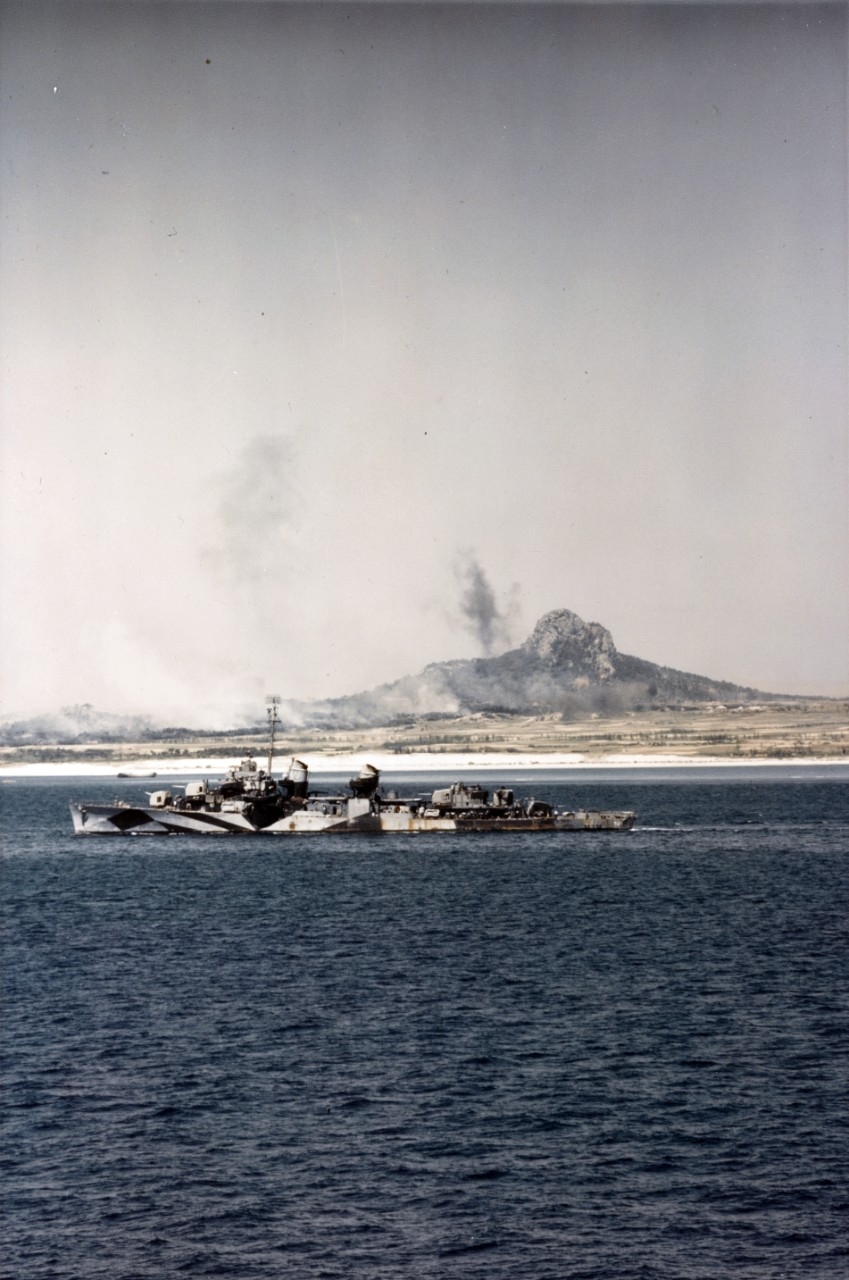 On the evening of 22 April, while still on radar picket duty, Isherwood’s crew finished the evening meal when a warning of an impending air attack sent men scrambling to their battle stations. Eagle-eyed lookouts spotted three Aichi D3A type 99 carrier bombers (“Val”) flying low towards Isherwood from off her port quarter. Weaving in an attempt to make it difficult for the destroyer’s guns to target them, the kamikazes closed in on Isherwood at an alarming pace. Torpedoman’s Mate Homer D. Stewart watched in awe as one of the Vals attacked the ship, recalling the enemy pilot, “looked just like a jockey riding a horse coming in on that plane.” The kamikaze continued its steep dive on the destroyer, prompting Lieutenant Commander Louis E. Schmidt Jr., commanding officer of Isherwood, to maneuver away from the Val.

Stewart later theorized his captain’s response inadvertently put Isherwood in the path of the kamikaze. Schmidt “tried to take evasive action. As a matter of fact, if he’d have turned toward the plane instead of away… it would’ve missed us.” At 1740, the kamikaze plowed into the No. 3 gun mount, wiping out most of the men stationed there, as well as the ammunition handling room. Stewart, manning a 20-millimeter gun just below the main deck, recalled the suicider caused the barrel of a 5-inch gun to flip over, smashing his own gun. Aviation gasoline “ignited around the depth charge next to us.” Realizing he had to put the fire out, the torpedoman’s mate grabbed a hose, voluntarily becoming the number one nozzleman. Suddenly, somebody grabbed Stewart by the shoulders and ordered him below, telling him, “I saw you get hit. You’re going to the wardroom.”

Fighting furiously to save Isherwood, damage control crews continued battling the fire threatening to reach the lone depth charge. A rescue ship coming alongside to offer assistance received a signal to stay away, while Schmidt deliberately remained outside Kerama Retto’s harbor, fearing an explosion onboard would damage other vessels anchored in the area.

Twenty-five minutes passed between the kamikaze striking Isherwood and the explosion of the depth charge. Only two minutes after arriving in the wardroom with several shrapnel wounds to his back, Stewart felt Isherwood shake violently. The blast turned the after engine room into a mass of twisted steel and “took out the next ten men on that hose when it blew up.” Stewart realized he would have been among the dead had he not been ordered below., with all fires put out and only her starboard engine functioning, Isherwood put into Kerama Retto, before steaming under her own power for Ulithi in May. She had suffered 42 men killed and another 41 wounded, and would not return to action for the remainder of the war. Transferred to a troop transport ship for treatment of his wounds, Stewart remained onboard a week before returning to Isherwood. Once safely back aboard the destroyer, he later discovered a Mitsubishi G4M twin-engine bomber (“Betty”) struck the transport shortly after he left. Told the enemy aircraft’s “burning wing went through the bed that was assigned to me,” Stewart explained his two recent near death experiences, proclaiming, “So that’s why I think that I have the Lord on my side. All the way.”