Investigating Okinawa: The Story Behind A Kamikaze Pilot’s Scarf 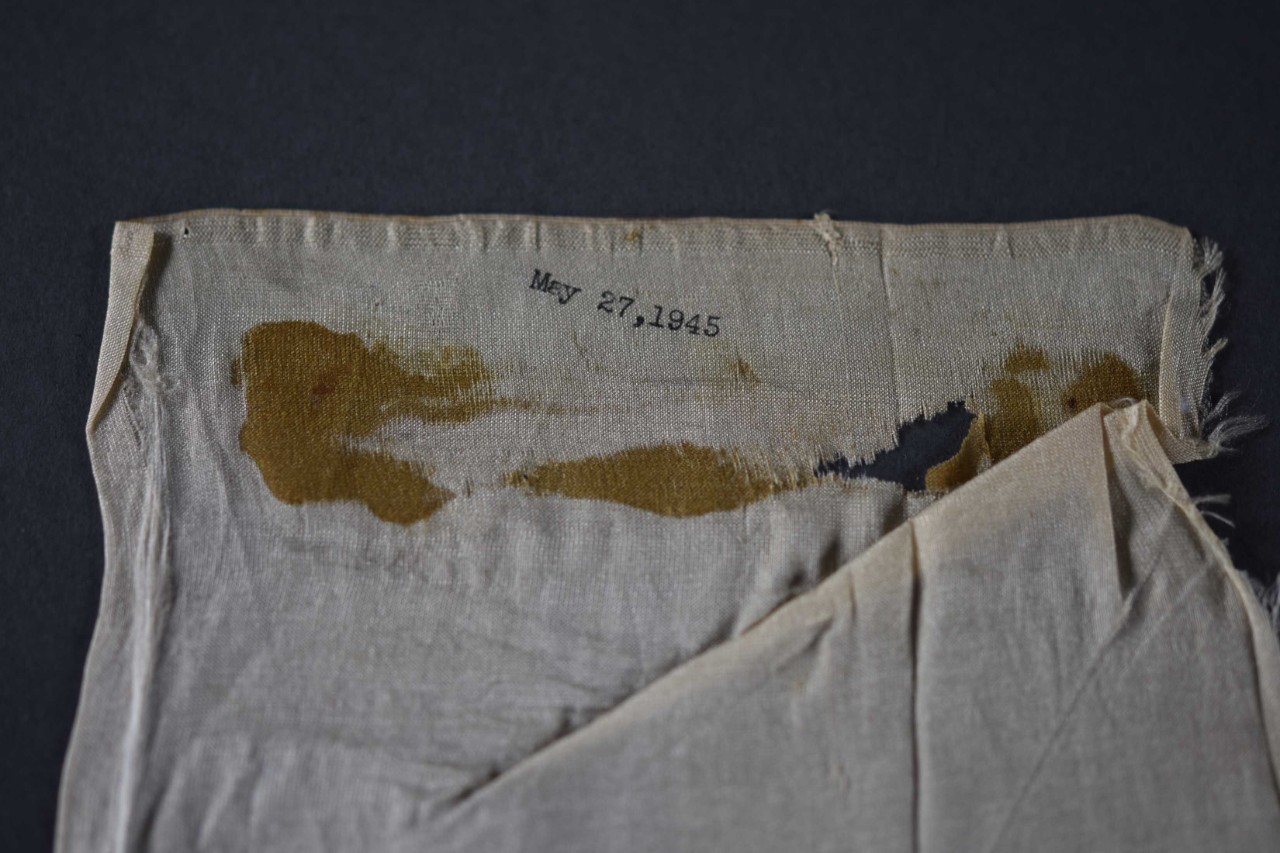 Close up of kamikaze scarf artifact. In the collection of the Naval History and Heritage Command.

A full array of history professionals make up the staff of the Naval History and Heritage Command (NHHC). They include historians, archivists, curators, librarians, museum specialists, underwater archaeologists, and combat artists. The command’s holdings are vast and the entire enterprise frequently collaborates to share Navy history through a range of materials and from as many perspectives as possible. One such multi-disciplinary team was formed to commemorate the 75th anniversary of the Naval Battle of Okinawa. Their work led to the identification of a donated kamikaze’s scarf (hachimaki) fragment not available for public view in one of the command’s artifact storage facilities. While little information existed about the artifact when it was discovered, the team worked to provide a more comprehensive understanding of the artifact and made a meaningful contribution to the Navy’s history of Okinawa. This is the story behind the artifact and the efforts to uncover its past.

The scarf was accessioned into NHHC’s collection on 14 May 1997 by the National Association of USS LCS(L) 1-130 and/or the L. Richard Rhame collection. This collection was primarily archival material (photographs, letters, narrative accounts, etc.), however, it also contained three artifacts transferred to the Curator Branch, one being the scarf fragment. The only information included with the scarf was:

“Segment of scarf worn by Japanese pilot who crashed near USS LCS-112 in Katchin Peninsula area of Buckner Bay, Okinawa. Pilot was taken aboard and later transferred to LSM-270. Donated by Jim Davis, USS LCS (L)-112.”

The donor also relayed the belief that the stain on the fabric was human blood. With little else to go on, the item went into storage and awaited further evaluation. It would take nearly 23 years. 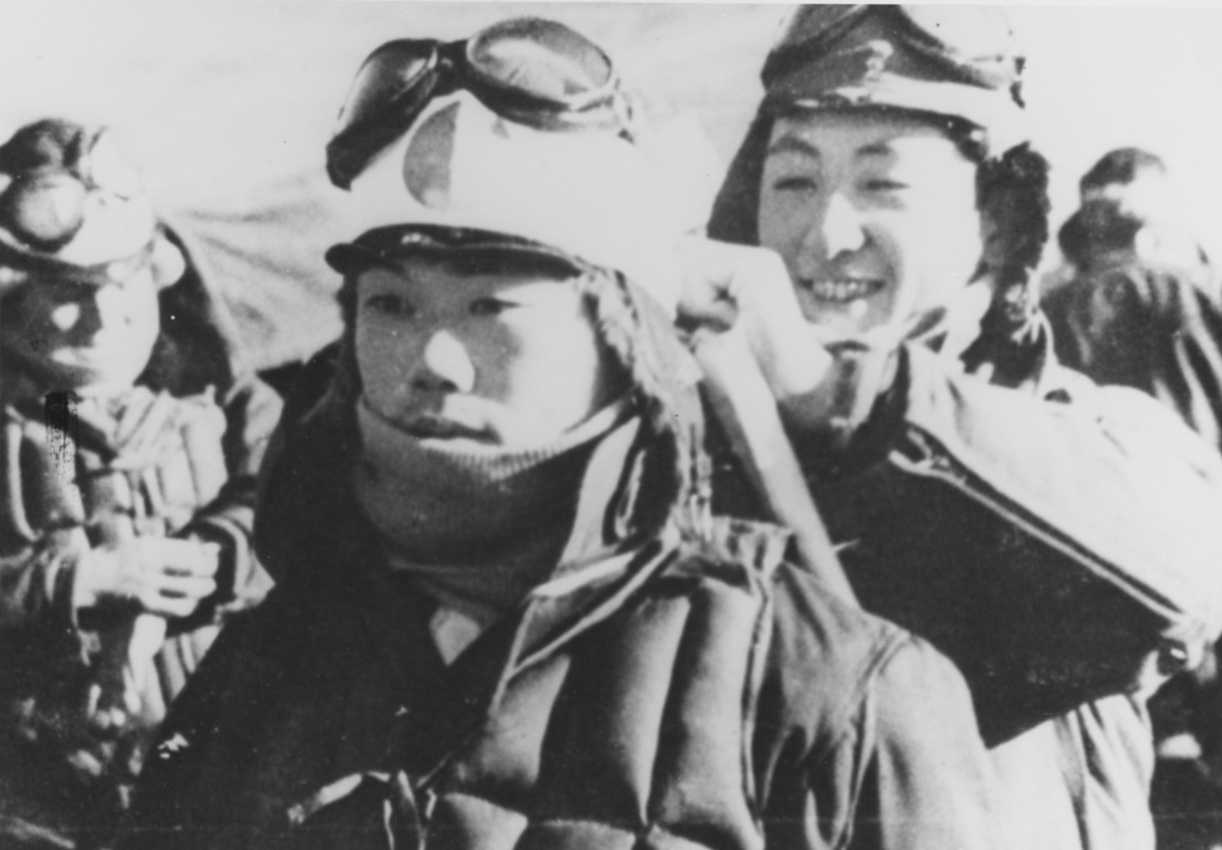 Reevaluation of the scarf took place in winter 2020 after NHHC historians inquired about any Okinawa-related artifacts available to contribute to the command’s commemorations for the battle’s 75th anniversary. With images of the scarf in hand, and clues from the caption, historians accessed the war diaries and muster rolls of the ships mentioned in the item description. Their research both confirmed and elaborated on the information included with the donation.

The pilot apparently failed at his mission of smashing into a U.S. naval ship and either crashed or was shot down around 2:30 a.m. on 25 May 1945. LCS-112 was patrolling the anchorages of Allied merchant ships at the time and the crew watched the plane crash into the sea some 300 yards off their port bow. The ship immediately went to the site of the crash but found only wreckage. Approximately two hours later, they spotted the pilot floating in the sea and took him on board as a prisoner. Medical personnel determined that the pilot had only sustained minor injuries, but was suffering from shock and exposure. LCS-112 continued protecting merchant vessels throughout the morning and fired on another kamikaze of 8:45 a.m. Shortly after, they transferred their prisoner to LSM-270 to for delivery to higher authorities for interrogation. The information included with the scarf, “donated by Jim Davis, USS LCS (L)-112,” paired with LCS-112’s muster rolls for the period indicate that sometime during the prisoner’s five hours on board, his bloodstained hachimaki was acquired as a souvenir. Later crewman QM3c James Evans Davis obtained a piece of it, and the date 27 May 1945 was typed onto the fabric. 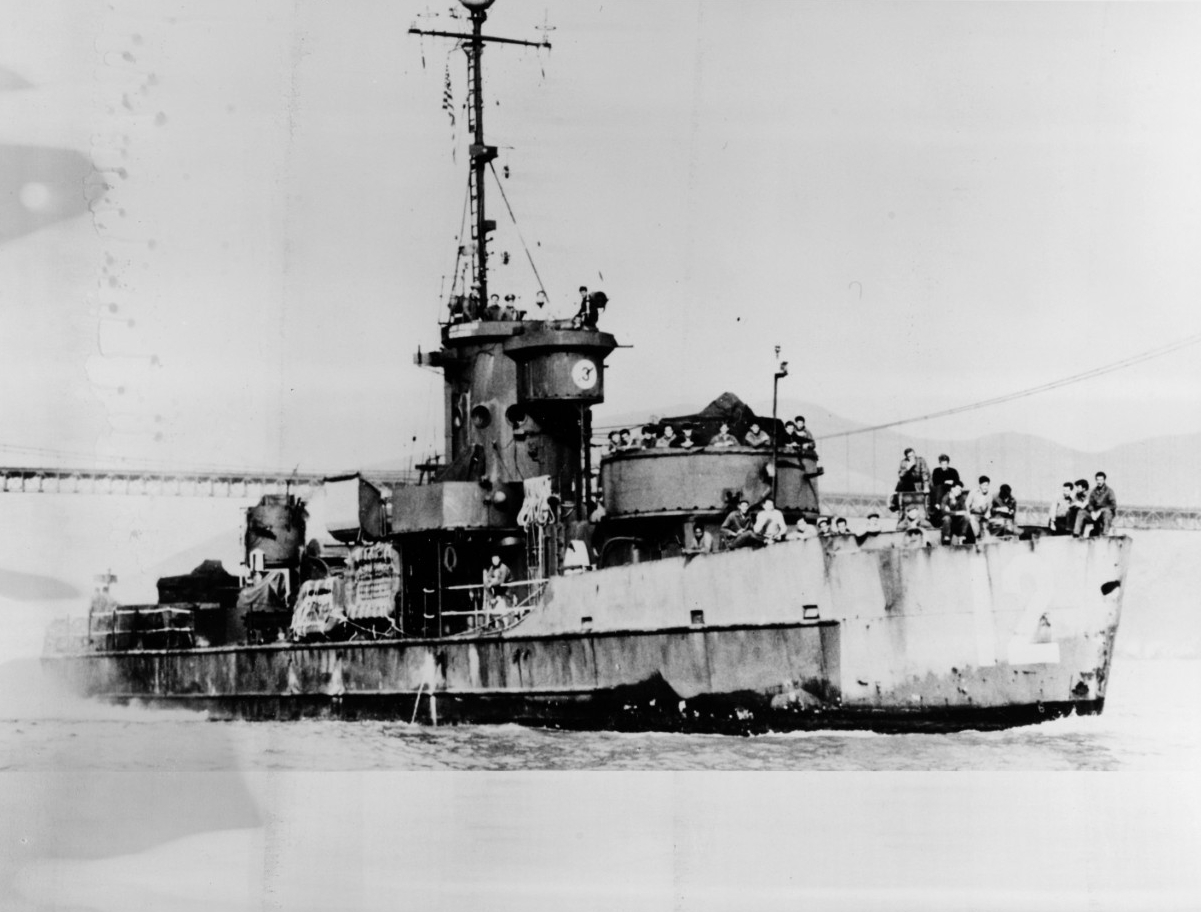 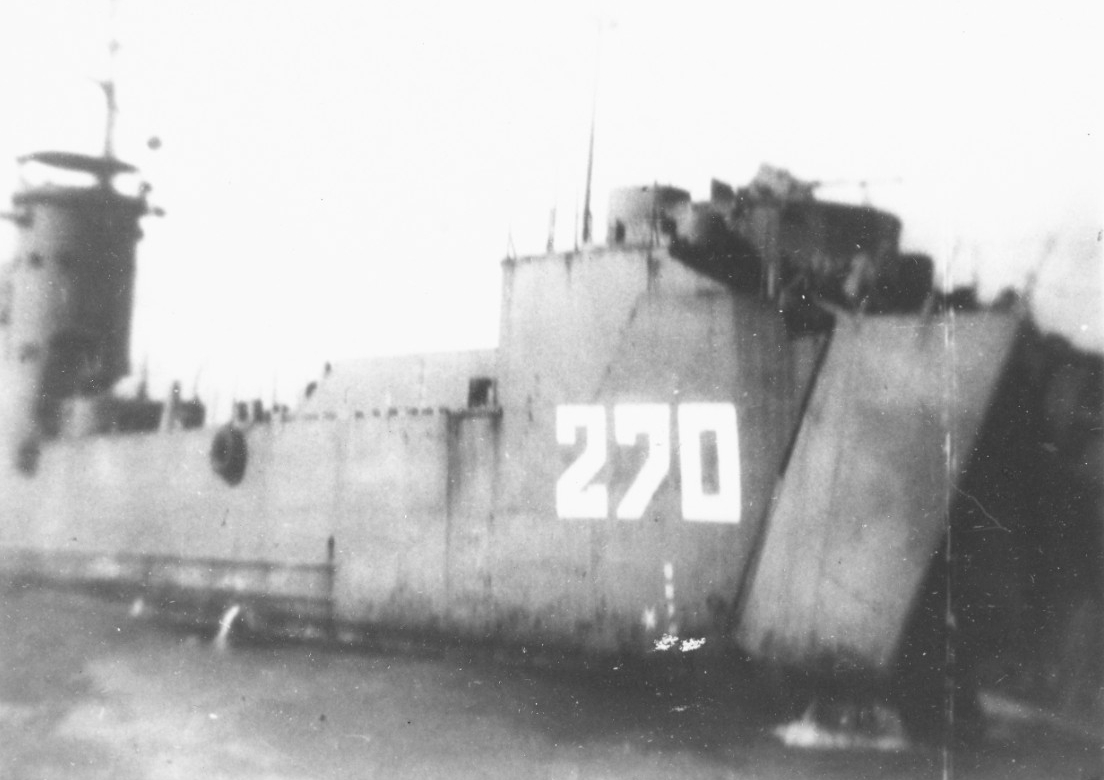 The story does not end there, however, as the war diary of LSM-270 provides further information on the prisoner’s experience. They were tasked by Commander, Task Group 51.19, with transporting the prisoner to the western side of Okinawa. The prisoner underwent a more thorough medical evaluation after coming on board for his final transport, and it was determined that his injuries were more extensive than initially thought. He “had several minor lacerations on the face, hands, and thighs, a wound below the right knee, a wound on the left lower thigh, and considerable skin seared off his legs below the knees.” After his medical examination, the pilot was placed under armed guard in one of the bunks in the crew compartments. At 3:15 p.m. that day, just over 11 hours after being pulled from the water, the pilot took his fate into his own hands and made a lunge at the two crewmen charged with guarding him. Each responded quickly and the prisoner was “shot twice, once by each of the two armed guards.” The shots temporarily stunned the prisoner, but he continued to press his advance and had to be restrained by five crew in order for handcuffs and shackles to be placed on him. The ship’s pharmacist mate quickly arrived on the scene and provided care. The prisoner’s wounds were dressed, and he was administered morphine and blood plasma. Despite these lifesaving efforts, he succumbed to his wounds and was pronounced dead at 6:30 p.m. on 25 April. When the news reached Commander, Task Force 51, the crew of LSM-270 were ordered to give the prisoner a proper burial at sea, which was carried out at 8:45 the following morning.[1]

This artifact’s story is a fitting one to share as commemorations of Okinawa’s 75th anniversary draw to a close. It is a reminder of the human sacrifices made during the Navy’s costliest battle. Five thousand American Sailors died during the long battle for Okinawa and almost as many were wounded. The majority of these American casualties came at the hands of enemies committed to sacrificing themselves instead of facing an inevitable surrender, much like the unnamed pilot who sortied to his death (albeit in an unanticipated way) proudly wearing his hachimaki.