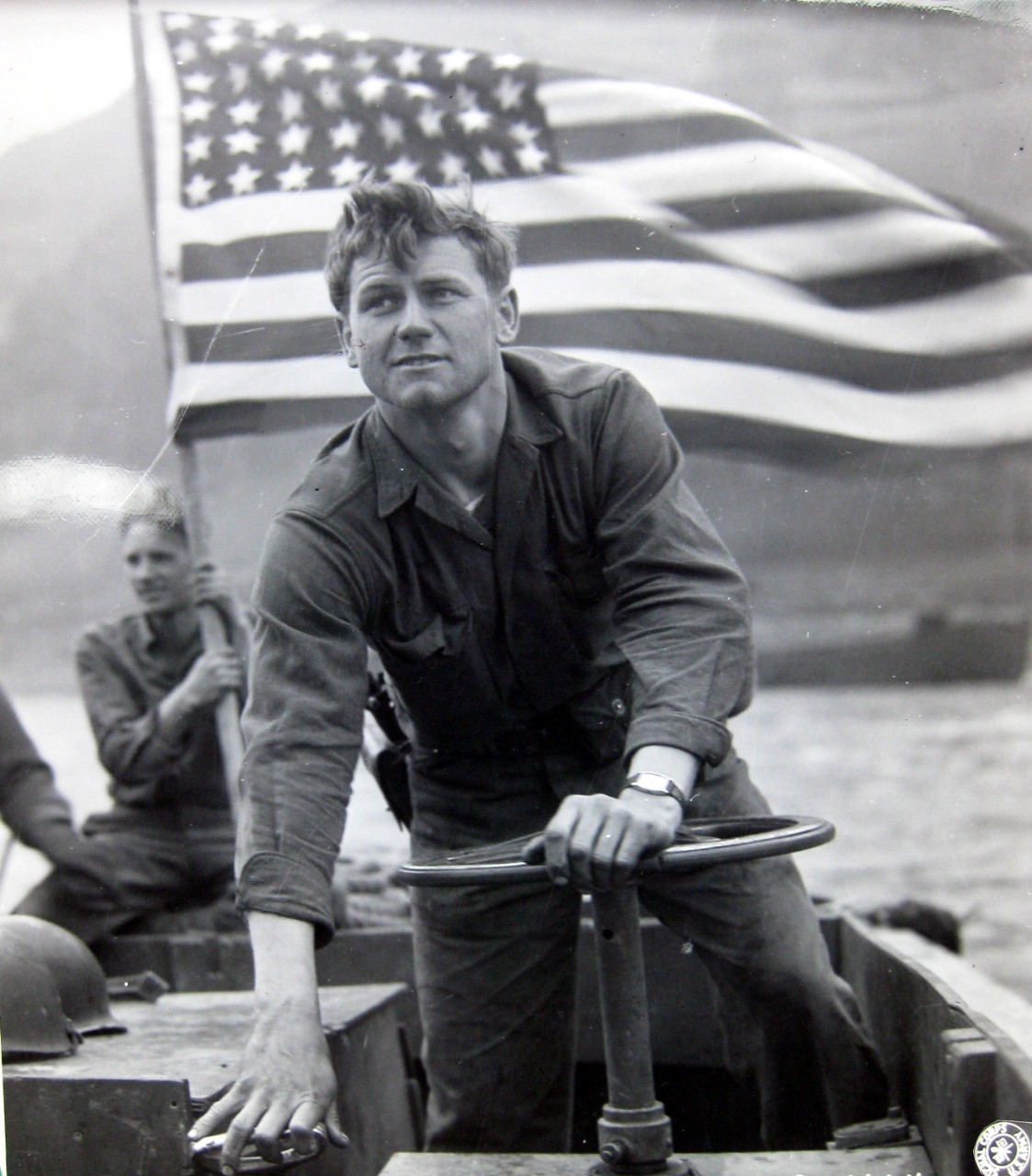 With the successful amphibious landings in France in 1944, Operation Overlord in Normandy and Operation Dragoon in southern France, and the continued advances that liberated German-held territory with Operation Cobra and Operation Market Garden, the western Allies seemed poised to drive into Germany and end the war early in 1945. The Germans, however, launched Operation Wacht am Rhein, an unanticipated armored offensive in the Ardennes on 16 December 1944. Although the resulting Battle of the Bulge had initially sent them reeling, the Allies blunted the German assaults and counterattacked after Christmas. By late January 1945, U.S forces, with their British, Canadian, and French allies, had regained the territory lost in December and resumed their drive eastward to defeat Hitler’s Third Reich. Only one major obstacle stood in the path of their advance: the Rhine River.

The projected Allied advance across the Rhine, coordinated by General Dwight D. Eisenhower, Commander, Supreme Headquarters Allied Expeditionary Force (SHAEF), was to consist of two major operations in March 1945. They were to be mutually supporting crossings by General George S. Patton’s U.S. Third Army and Field Marshal Bernard L. Montgomery’s British 21st Army Group, respectively. These operations were to surmount the final major obstacle and be the penultimate act in the Western allies’ drive into the German heartland. Plans for the ambitious river crossing had begun almost six months previously. General Omar N. Bradley, commander of the U.S. 12th Army Group, anticipated that as the Germans retreated, they would demolish all of the bridges in an attempt to deny the Allies an easy run at the Rhine’s eastern shores. To cross the river, Bradley knew that he would need to call upon the U.S. Navy.

Bradley secured the four boat units of Task Group (TG) 122.5.1 The Navy contingent consisted of 24 LCVPs (landing craft, vehicle, personnel), 13 officers, and 205 men. These units were further bolstered by an additional 45 reserve LCMs (landing craft, mechanized). Their mission was to support the Army’s assault across the river for the operation codenamed “Plunder.” Commander, Naval Forces in Europe (COMNAVEU) also supplied 4,000 Navy pontoon units and a construction battalion (Seabees) to assemble them. These were to be deployed in various capacities in the conduct of the crossing operations. 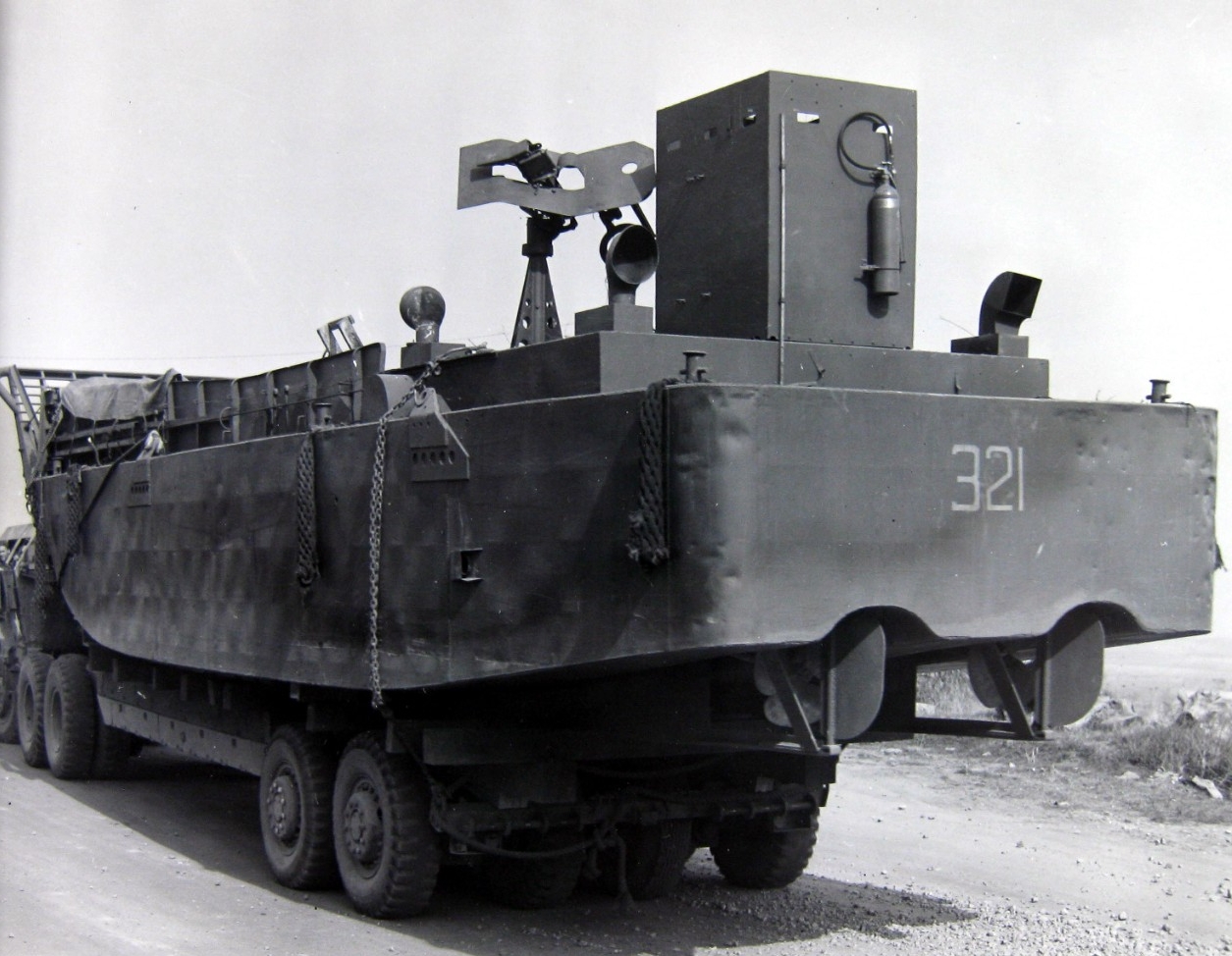 Bradley’s decision to call on the bluejackets proved prudent when the Allied forces reached the Rhine in early March 1945 and found just about every span across the river already destroyed. Eisenhower decided that several simultaneous crossings would have the greatest chance of success of sustaining the drive into the Ruhr in order to encircle a large part of the German Army in advance of the final drive toward Berlin. He assigned Montgomery’s 21st Army Group as the main effort and set the date to cross the Rhine for 23 March at Wesel. Patton’s instructions were to cross with his Third Army when he arrived at Mainz, roughly 100 miles upstream from (south of) Montgomery’s position. 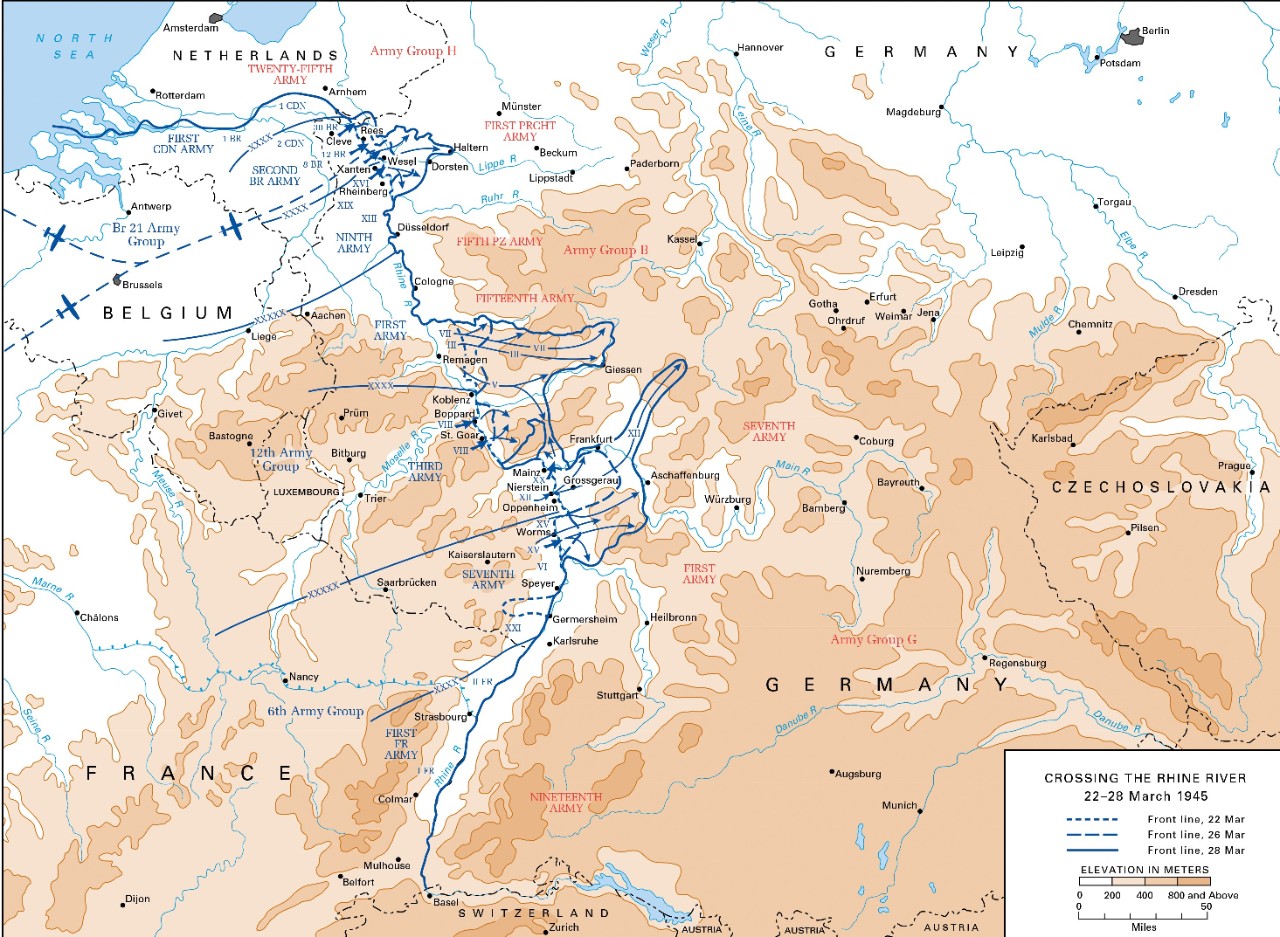 On 7 March, to the surprise of both generals, an infantry platoon of the U.S. 9th Armored Division discovered a bridge still standing across the Rhine at Remagen. The Ludendorff Bridge had yet to be destroyed as the last of the German army used it to retreat safely to the east bank. That night, Lieutenant Wilton Wenker’s Boat Unit 1 (TU 122.5.1), which had been training in Belgium, advanced to the river. Meanwhile, the Army platoon raced across the bridge, securing it as a crossing point. Having established a foothold on the opposite bank, they then awaited reinforcement by the Navy.

The first ten LCVPs took to the water on the morning of 11 March at Bad Neuenahr, followed by the remainder over the next three days. The task unit assisted the crossing by running ferry services at designated points and building pontoon and treadway bridges. German artillery and several Luftwaffe aircraft attempted to destroy the Ludendorff Bridge without success. Allied use of the span continued until it finally collapsed on 17 March. The transfer from the west bank to the east continued to run for ten days. During this time, Boat Unit 1 ferried more than 14,000 troops and 400 vehicles across the Rhine.

After the unexpected success at Remagen, Montgomery prepared to deliver another successful assault across the Rhine. Patton, however, drew attention away from the main effort when he arrived on the Rhine’s west bank near Oppenheim on 21 March. Seeing the chance to beat “Monty” across the river, he prepared for the Third Army to cross the next evening. While Patton did not formulate an elaborate plan, his staff had been collecting assault boats and bridging equipment for an anticipated crossing operation since the previous August. The primary crossing took place at Oppenheim, and the Army assault boats jumped off at 2200 on 22 March. In order to maintain the element of surprise, there was no preparatory artillery fire. Lieutenant Commander William Liede’s Boat Unit 2 (TU 122.5.2) followed the initial assault wave at 0300 the next morning and immediately began ferrying troops across the river. The unit ran on a non-stop schedule for the next 72 hours. As the first waves of troops landed on the opposite bank unopposed, the Allies soon came under fire from German artillery fire and bombing attacks by the Luftwaffe. The worst of the struggle finally ended at Oppenheim on 26 March, with two bridges erected across the river and the Navy patrolling several miles of waterway in either direction. The LCVPs had transported over 15,000 men and 1,200 vehicles across the river between 23 and 26 March. 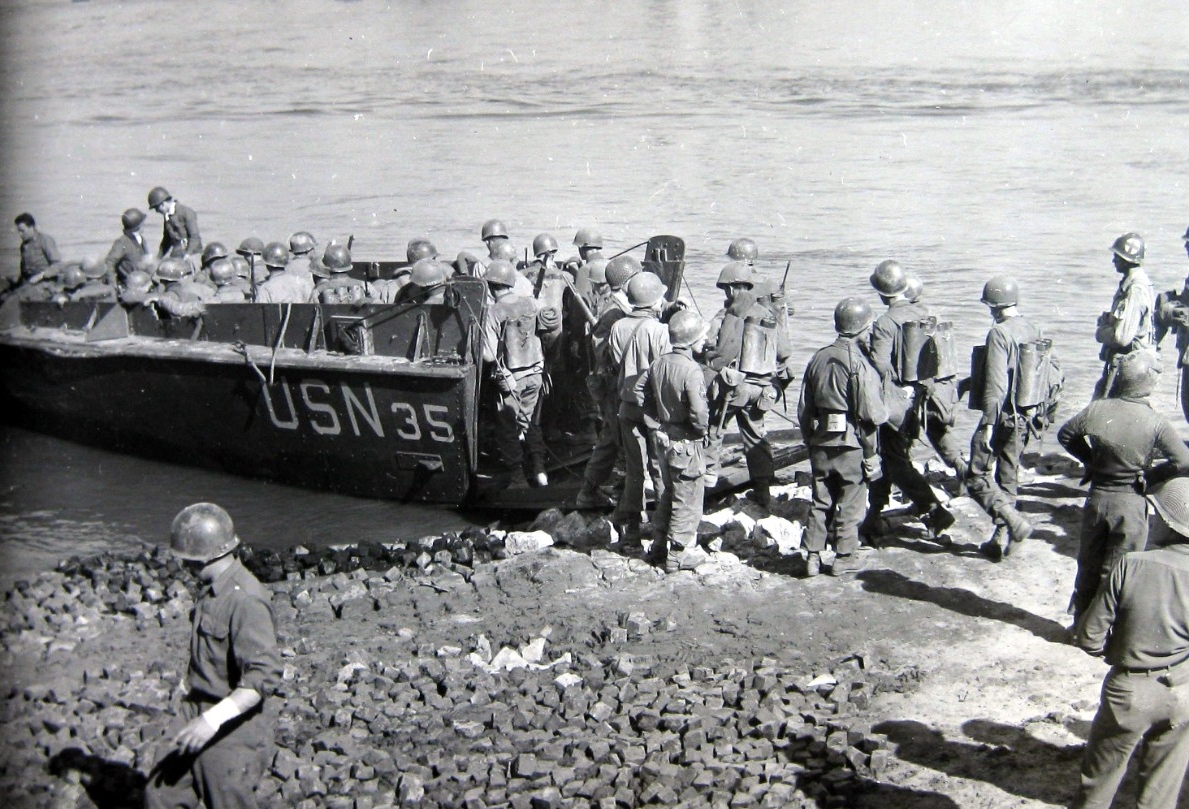 The Third Army executed three more crossings at Boppard, Oberwesel, and Mainz. Boat Unit 2 sent several LCVPs to Boppard on 25 March to assist the 87th Infantry Division, moving 5,000 men and 400 vehicles in two days. Six more boats from Unit 2 supported the 89th Division at Oberwesel on 26 March. The LCVPs capably moved the entire division’s men, vehicles, and equipment within 48 hours. In contrast to the previous two crossings, the final operation at Mainz faced the greatest resistance. In the early hours of 28 March, the 80th Infantry Division set out in Army assault boats and ran headlong into heavy German artillery fire. The crossing was suspended at 0330, just two hours after it had begun. Ensign Oscar M. Miller, USNR, unaware of the halt, sent the first LCVP across at a different point 500 yards below the assault line. The boat landed on the eastern bank unopposed, and the crossing recommenced at the new position with six LCVPs provided from Oppenheim. The Germans did not notice the adjusted position for several hours and their hurried artillery attacks did not hit a single boat. Including the initial crossing at Oppenheim, all four crossings succeeded without preparatory artillery fire. The use of the Navy landing craft immediately following the landings enabled Patton to reinforce his forces rapidly on the eastern bank and expand their initial successes in order to “plunge onward into Central Germany” without pause. 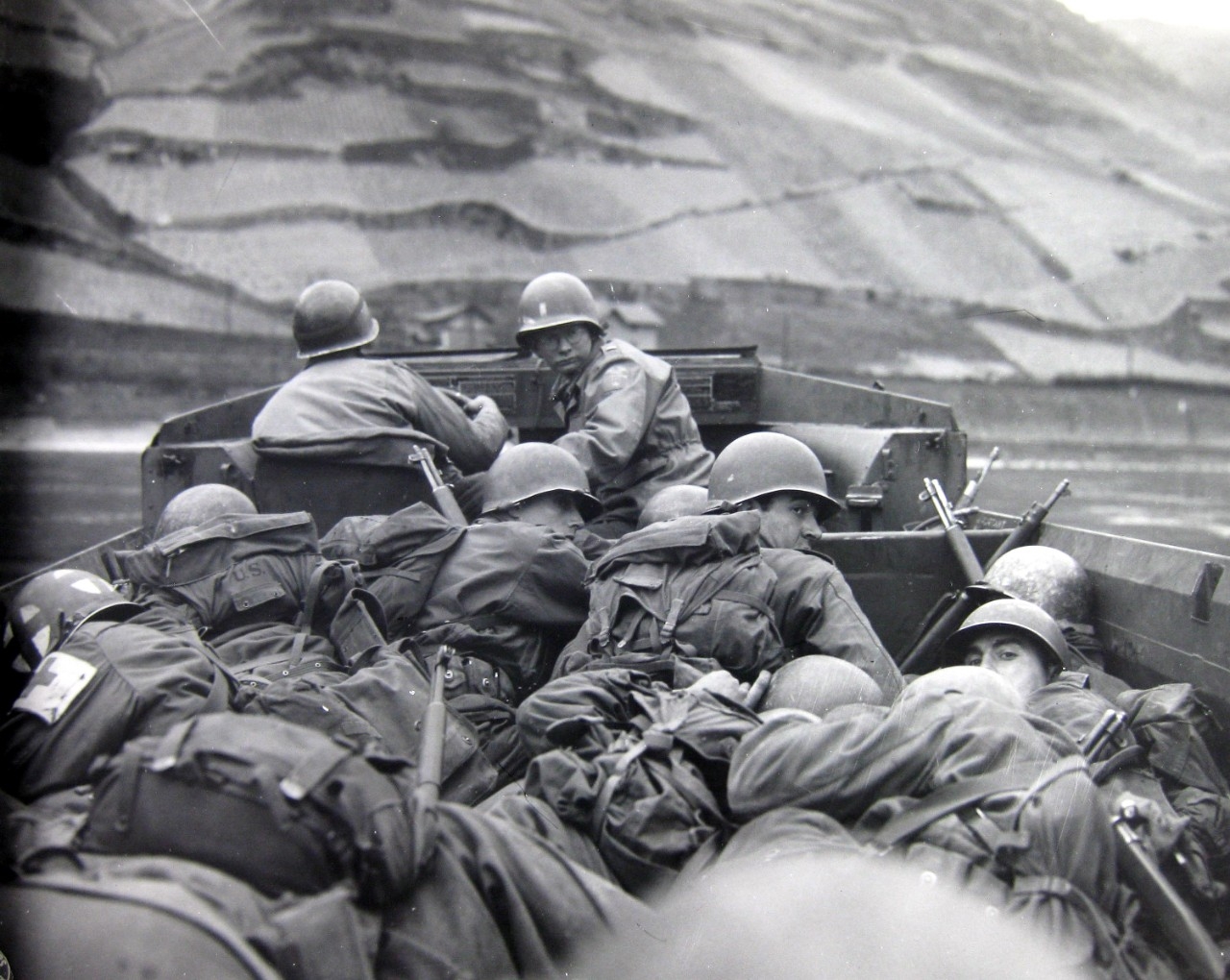 Though beaten across the Rhine by Patton’s Third Army, Montgomery’s meticulous operation shone in its flawless execution. The plan focused on Wesel, with multiple crossings set to occur along a 22-mile front on the evening of 23 March. Units of the Canadian First Army, British Second Army, and the U.S. Ninth Army were to receive support from the First Allied Airborne Army’s parachute drop on 24 March (Operation Varsity). The river assault began at 1800, when 5,500 artillery pieces bombarded the eastern bank of the Rhine. The firestorm was so intense that the U.S. Ninth Army’s guns alone fired over 65,000 rounds in an hour at the bombardment’s peak. At 2100 the 51st Highland Division jumped off first, followed an hour later by a British commando brigade. In the early hours of 24 March, the 15th Scottish Division and the U.S 30th and U.S.79th divisions joined the attack at Rheinberg. Lieutenant Commander Willard T. Patrick’s Boat Unit 3 (TU 122.5.3) assisted the crossings just north of the town, starting at 0100. These craft ferried 3,000 troops, 80 57-mm guns, and more than 500 assorted armored and wheeled vehicles. Although none of Montgomery’s crossings were contested, German resistance on the far left of the Allied front did briefly hold up the advance. Two days of hard fighting, however, saw the Allies successfully break through and begin to drive across northern Germany. With 12 bridges spanning the river, the U.S. Ninth Army under Montgomery had established a bridgehead 35 miles wide and up to 12 miles deep by 28 March. 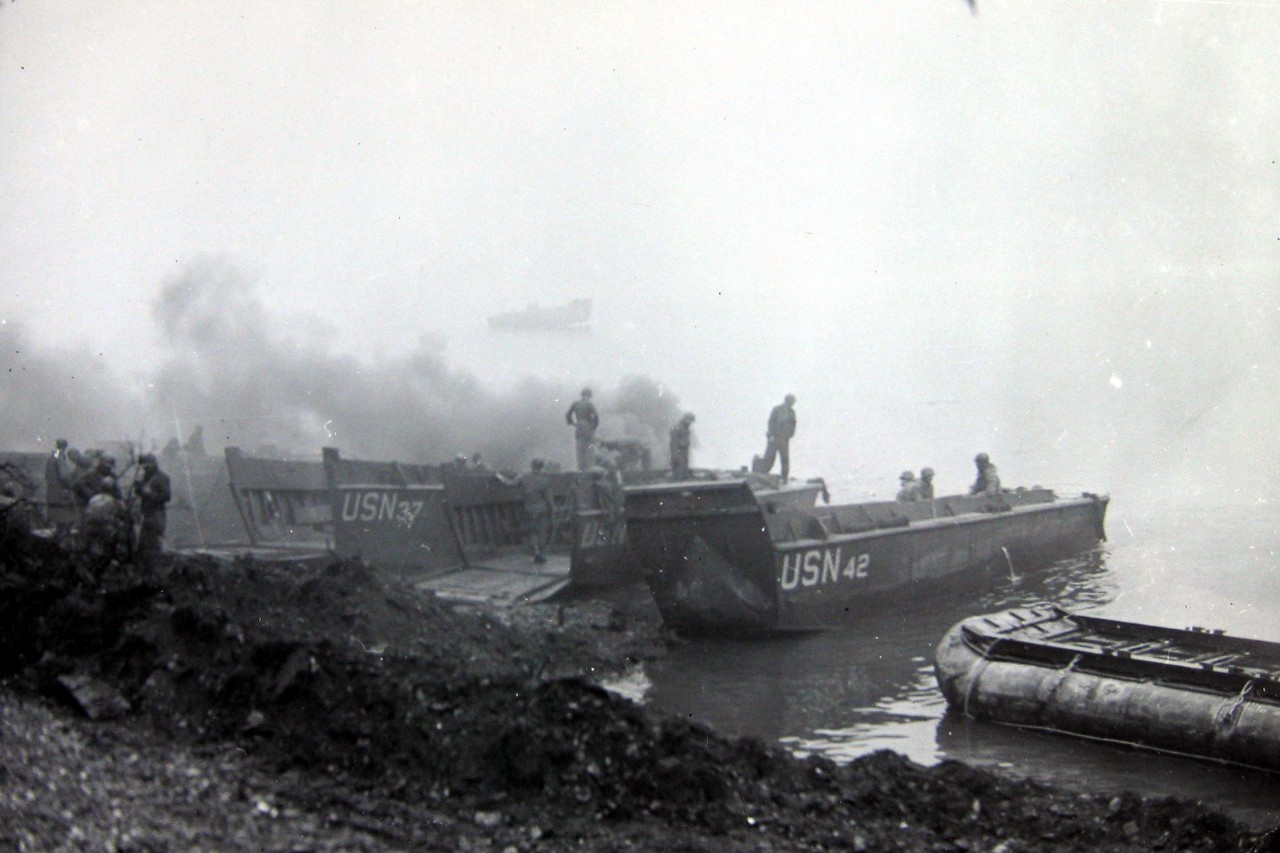 Having crossed the Rhine, the Allies advanced into the German heartland. With the relentless Soviet juggernaut driving on Berlin from the East, it was only a matter of weeks before Germany capitulated. Generaloberst Alfred Jodl signed the articles of unconditional surrender at SHAEF headquarters at Reims, France, on 7 May 1945.2

Having overcome the Rhine with the Navy’s assistance, the Army expressed its sincere gratitude. Acknowledging that the crossings might not have been as successful without the bluejackets, the U.S. Third Army’s official report stated that:

…the Navy again demonstrated its ability to be the most useful and effective in a crossing operation.... Soon after the naval craft hit the water, they poured over such a continual stream of troops, vehicles, and tank destroyers in the early crucial hours that the enemy artillery was silenced, and further ferrying and bridging was able to proceed without interference.

The deployment of the LCVPs and LCMs facilitated the massing of Allied forces on the Rhine’s eastern bank and enabled the rapid exploitation of the established bridgeheads. With their contribution to Operation Plunder—overcoming the final obstacle barring the way—into Germany from the West, the Navy played a significant role in ending the war in Europe.

Oral History: Vice Admiral Alan G. Kirk. Kirk was Commander, United States Naval Forces, France, in 1944 and 1945, and tells of the Navy’s part in the Rhine River crossing and of the capture of the Atlantic ports occupied by the German military.