Operation Overlord: From Concept to Execution 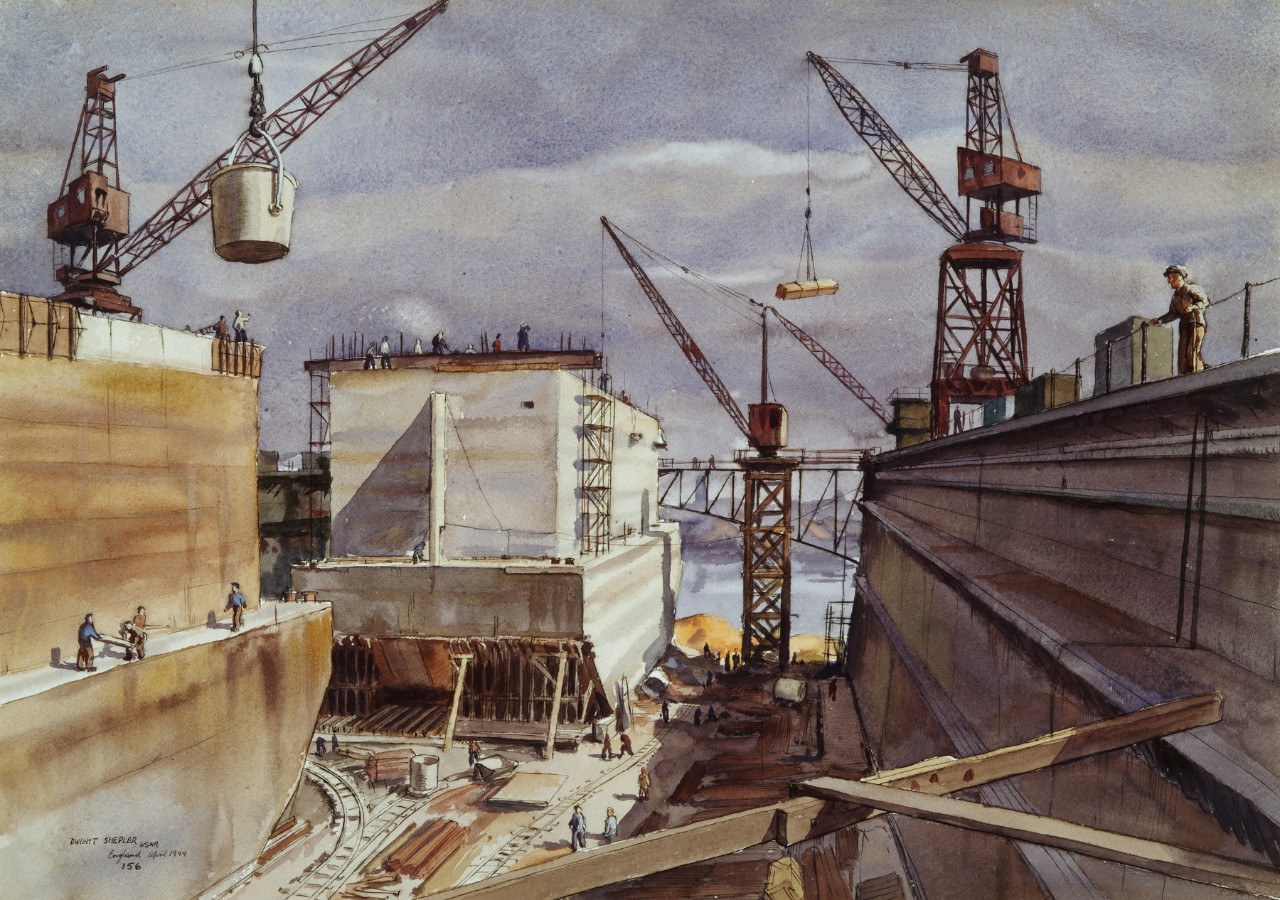 The view that Germany was the more dangerous of the Axis powers was a foundation of Allied strategic planning assumptions at the Arcadia Conference, held in Washington, DC, in late December 1941. Thus, an eventual large-scale Anglo-American landing in northwestern Europe was seen as inevitable. By early 1942, Allied operational planning was in progress, assessing three different operations: Bolero, the build-up of Allied forces in Britain, which commenced in early 1942; Sledgehammer, the establishment of a defensive salient on the French Cotentin peninsula with the intent to pin down German forces; and Roundup, in which broad beachheads were to be seized on the French Channel coast, enabling a breakout into German-occupied France. The latter was eventually to become Operation Overlord. However, two significant obstacles needed to be overcome first.

Chief of these was the reluctance of Britain, which had sustained significant reverses in France and in the Mediterranean theater during the first three years of the war, to commit to a large-scale assault aimed at the heart of Germany. The disastrous outcome of the Anglo-Canadian raid at Dieppe, France, in August 1942 served to bolster this position. Instead, Prime Minister Winston Churchill advocated a series of operations on southern Europe’s periphery—the continent’s “soft underbelly”—to force a dispersion of enemy forces and to secure a region vital to the British Commonwealth. This approach, only reluctantly adopted by the Americans, led to the Allied landings in North Africa (Operation Torch) in November 1942, and the amphibious assaults on Sicily (Operation Husky) in July 1943 and in southern Italy (Operation Avalanche) that September.

The second factor affecting invasion planning was the necessity to build up Allied forces and associated materiel in Britain. In 1942, the country was still recovering from earlier losses and American industrial output had not yet reached its full wartime potential. The assets necessary for a successful cross-Channel invasion of France were either non-existent or not yet in place. Moreover, despite their success, Allied operations in the Mediterranean in 1942 and 1943 actually slowed the build-up in Britain—and, in part, drew upon forces already in place.

Nonetheless, a combined planning group, COSSAC (Chief of Staff Supreme Allied Commander–designate), was established in March 1943. COSSAC’s first task was threefold: plan a series of diversionary operations intended to keep the Germans off-balance; plan for the—admittedly remote—possibility of Germany’s sudden collapse; and plan for a major amphibious assault on France. The Trident Conference, held by President Roosevelt, Churchill, and the Combined Chiefs of Staff in Washington, DC, in May 1943, projected that the invasion would occur during 1944. The Quadrant Conference, held in Quebec in August 1943, subsequently proposed May 1944 as the date for the invasion. (Anvil, the planning initiative for a parallel invasion of southern France, was also discussed, but viewed skeptically by the British. Anvil would ultimately become Operation Dragoon, executed by predominantly U.S. naval and land forces on 15 August 1944.)

COSSAC narrowed down the choice of landing areas in northern France to the Pas-de-Calais and the Picardy coast, and the Bay of the Seine and Calvados region of Normandy between the city of Caen and the Cotentin Peninsula. Due the broad beach areas it offered—and despite lacking a major port—the latter alternative was ultimately chosen.

Into the autumn of 1943, COSSAC’s efforts met with continued reluctance on the part of Churchill and other British leaders to engage in any cross-Channel operation unless German opposition had been degraded to the point at which an assault would be a walkover. Moreover, although the Allies had agreed that a U.S. general would be appointed as overall commander, Roosevelt had yet to select one to fill this pivotal position at the time of the November 1943 Casablanca Conference. At the subsequent Tehran Conference, it was Soviet dictator Josef Stalin, whose nation had hitherto borne the brunt of combat with Germany, who bluntly confronted Roosevelt and Churchill with both issues. The Western Allies subsequently committed to opening a second front against Germany in the summer of 1944 and, on 24 December, Roosevelt selected General Dwight D. Eisenhower to be SACEUR (Supreme Allied Commander, Europe).

Eisenhower favored the adoption of a broader front on the Normandy beachhead and approved plans that extended both the proposed U.S. and British-Canadian sectors. Extension of the landing beach boundaries required both additional forces and additional landing craft. The Combined Chiefs of Staff also accepted Eisenhower’s position that three rather than two airborne divisions be slated for an air assault behind German defensive positions just prior to the beach landings. The Naval Outline Plan was issued by Admiral Sir Bertram H. Ramsey, RN, Allied Naval Commander Expeditionary Force, on 28 February 1944. It delineated the required naval force structure for Overlord’s Initial Joint Plan. The combined naval component, which would carry out Operation Neptune, Overlord's cross-Channel assault phase, encompassed the predominantly British Eastern Naval Task Force and the predominantly American Western Naval Task Force. Each of these had extensive amphibious, bombardment, gunfire-support, minesweeping, and escort components. Rear Admiral Alan G. Kirk, USN, a veteran of amphibious assaults in the Mediterranean theater, was appointed Commander Western Naval Task Force.

Build-up of forces in Britain now proceeded at an accelerated pace. Amphibious training centers, marshalling areas, supply depots, and hardstands for loading landing craft dotted England’s south coast. Ports extending around Britain from south Wales to the Norfolk coast were filled with assorted landing ships and craft, as were many inland waterways. Due to the lack of immediate access to high-capacity port facilities from the proposed Normandy landing beaches, the massive concrete and steel components for two artificial ports (“Mulberries”—one for the U.S. landing beaches, one for the British-Canadian sector) were conceived and rapidly constructed. As the invasion forces would have ongoing fuel requirements following the landings that would exceed available sealift capacity, flexible undersea pipelines (PLUTO—Pipeline Under the Ocean) were assembled and readied for rapid deployment after the beachheads had been secured. Since most of these preparations could not be hidden from German reconnaissance aircraft, a massive decoy and deception effort successfully confirmed the German leadership’s assessment that the main Allied landings would occur in the Pas de Calais area rather than farther to the southwest in Normandy. Nonetheless, many sites in Britain linked to Overlord remained vulnerable to sporadic German bombing raids. Amphibious exercises on the south coast intensified in spring 1944 and invariably exposed Allied troops and landing craft to attacks by German torpedo boats based on the French Channel coast. The successful German surface attack on U.S. landing ships on 28 April at Slapton Sands, Devonshire, sank two LSTs, badly damaged a third, killed more than 700 U.S. Navy and Army personnel, and wounded at least 200 more. Allied bombing raids increasingly concentrated on French coastal and inland areas, targeting German naval undersea and surface forces in French ports, troop concentrations, airfields, railway and transportation hubs, command and control facilities, and communication nodes.

The Normandy landing beaches themselves presented a number of complications for Allied planners. Most of them had long, gently sloping shingle or sand gradients that terminated at dune lines and sea walls. They were subject to wide tide variances—at low tide, assault troops would lack cover for many hundreds of feet. Although the German coastal fortifications, the so-called Atlantic Wall, were hardly that, potential landing areas along the northern and northwestern French coasts were heavily defended. Moreover, the transfer of the legendary Generalfeldmarschall Erwin Rommel to northern France in November 1943 as commander of the German Army Group B had infused new energy into construction of fortifications and elaborate beach obstacles. The latter, often mined, extended from above most beaches' high-water marks out beyond the low-water line. They were specifically designed to impede or destroy landing craft and, at high tide, were hidden below the surface. Well-sited positions for larger-caliber guns commanded the seaborne approaches and automatic weapons enfiladed most of the open beach areas along the axes of dune lines and sea walls. Antipersonnel and antitank mines had been planted on many beaches and in their exits to the country beyond. Barbed wire had beem strung extensively along the beaches and in the tidal areas. As construction of the Mulberry harbors was successfully concealed from them, the German leadership assumed that the Allies would immediately require port facilities to meet the landing force's immediate and follow-on logistic requirements. Thus, port cities in northern France were heavily fortified.

During discussions about the assault’s timing (H-hour), the Army advocated landing at high water to minimize the time required to cross the open beach areas. On the other hand, the Navy pushed for landings at low tide, with assault craft grounding outside of the beach obstacles, which demolition teams would clear. The services compromised on an H-hour entailing initial landings within three hours after low water at a time just before, or 90 minutes after, dawn. These conditions narrowed the possible invasion date (D-day) to the 5–7 and 18–20 June windows. Due to unstable weather conditions, the actual date was bound to be as much a compromise as the timing of the landing was. Since the weather made a sudden postponement a possibility, planners realized that an earlier landing date allowed more leeway to adapt to changing circumstances. Thus, with D-day initially set for 5 June, combat loading of the invasion fleet would need to be completed by 3 June, with the two task forces underway by 4 June.

The weather patterns impacting on the landing areas had been closely monitored for weeks prior to D-day. With most ships already underway, marginal conditions had changed for the worse by the evening of 3 June and, by the following day, had become unfavorable. A low ceiling prevented tactical bombing and close air support, and seas were heavy enough to swamp landing craft. Eisenhower decided to postpone the landings for 24 hours and the task forces were recalled. Smaller vessels returned to port and larger ships circled off of England’s coast. All troops remained on board. Weather conditions improved and, at first light on 6 June, the Allied invasion fleet had assembled off of Normandy.