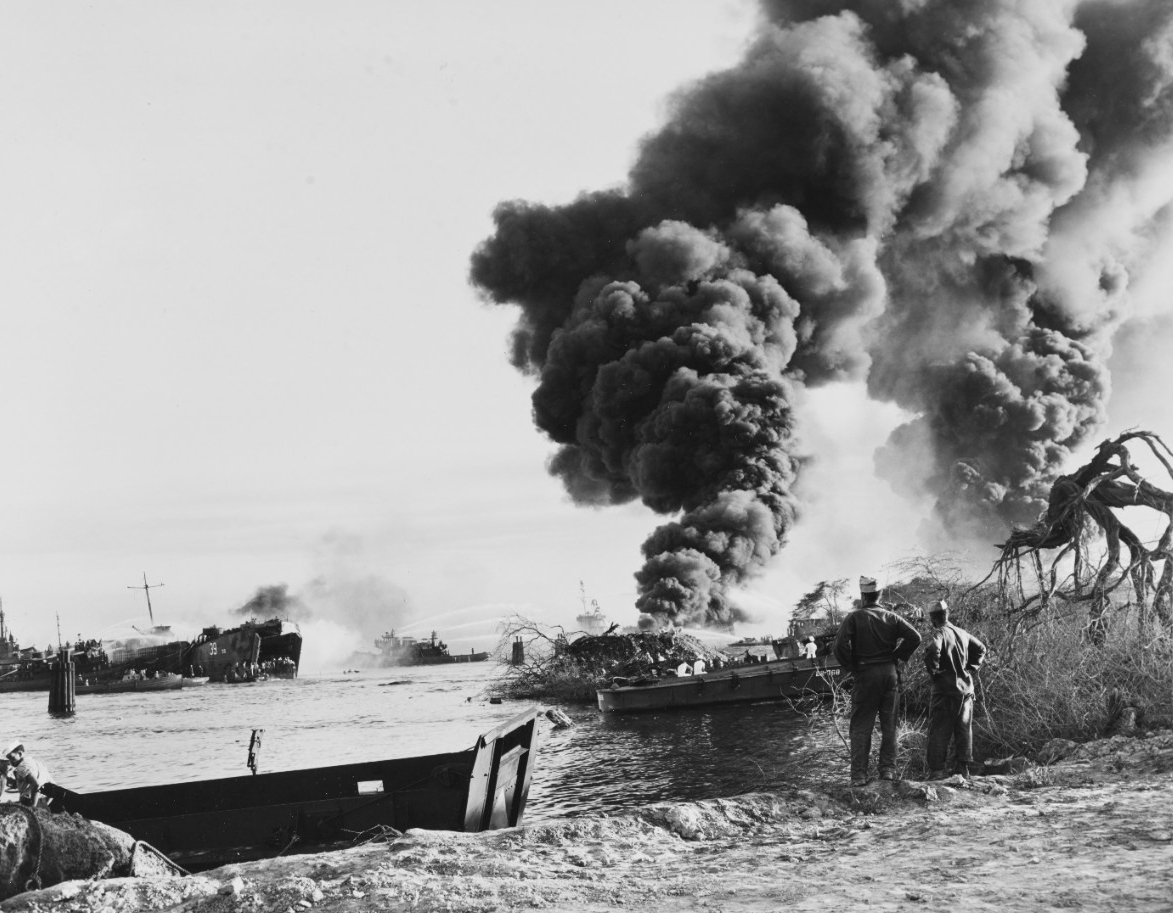 USS LST-39, 22 May 1944. LST afire in Pearl Harbor a day after the 21 May 1944 explosion that destroyed several LSTs in West Loch. Men are visible on her bow ramp, probably removing cargo. Other vessels are alongside and nearby, engaged in firefighting (SC 185701).

Pearl Harbor contains three subareas, or “lochs,” named East, Middle, and West. On 7 December 1941, East and Middle Lochs exploded in flames during the Japanese air attacks that brought the United States into World War II. West Loch, spared from destruction at the hands of the enemy, fell victim three-and-one-half years later to a spectacular and devastating ordnance accident.

Since the U.S. entry into World War II, West Loch had harbored, in addition to Navy and civilian vessels, large stores of ammunition, fuel, and other materiel. On 21 May 1944, the various berths were housing 29 LSTs (tank landing ship), each as long as a football field. Preparations were almost complete for the journey to Saipan, the invasion of which was scheduled for 15 June. “To say that the LSTs were combat loaded,” writes historian Howard E. Shuman, “is a euphemism.” Rather, “they were floating ammunition dumps, floating gasoline storage tanks, floating vehicle garages, floating ship repair yards, and floating overcrowded hotels.”[1]

At berthing station T-8 on the afternoon of 21 May, one of these ships—LST-353—appeared spontaneously to combust. “There was a terrific explosion,” according to Paul E. Cooper, a Marine on board a neighboring LST.[2]

From the deck of LST-353, shrapnel shot out in all directions, and burning debris fell from the sky. Blast forces flung men off their feet and into the sea. High-octane gasoline spilled into the water and ignited. Fires broke out on neighboring LSTs.[3]

“I thought my head had blown off,” recalls William L. C. Johnson, a pharmacist’s mate on the tank deck of nearby LST-69.[4]

At the next berthing area over, T-9, LSTs began to flee the area. Some tried to get to a far corner of the loch, while others set course for open sea.[5] Amid the confusion, none had made it very far when the second, larger explosion came—just three minutes after the first.

Cooper had been ordered to keep the Marines on his LST below decks to protect them from falling debris but, when the second explosion hit, “all these men I was trying to keep [inside] came running through the door at the same time. I got knocked down as they went over the side into the water.”[6]

Meanwhile, Johnson, having departed his LST in a small landing craft, was busy trying to pull men out of the water. But with the second explosion, which “threw equipment, men, and shrapnel all over the harbor,” Johnson recalls, “I dove into the water and held my hands over my head.”[7]

Now the LSTs at berths a little farther away started to leave West Loch.[8] Closer to the explosions, however, raging fires blocked crews’ access to the forward lines, which kept the LSTs moored in the developing conflagration. The heat and subsequent explosions pushed survivors aft, onto the fantails, and eventually into the fiery water.[9]

At berthing area T-8, where the disaster had started, one of the LSTs, either adrift or under command of someone steering it toward safety, severed the lines of another LST before beaching itself 200 yards away. Two more LSTs from T-8 followed. Five others, their lines somehow cut, began to drift southward.

And now a third explosion, perhaps the largest, issued from one of these LSTs. Sound waves traveled as far as 15 miles. Flaming debris came down in a 3,000-foot radius. As the sky rained fire, LSTs at the rest of the berthing areas began to get underway.[10]

To make matters even worse, one of the burning, exploding LSTs drifted over to the next berthing area, T-9, and ignited yet another tank landing ship.

The situation continued to deteriorate. “The smoke was so thick, you couldn’t see much in any direction,” Cooper recalls. LCTs (landing craft, tank) and other small vessels cut through the water, but their skippers had trouble seeing men amidst the smoke and flames. Some of the men in the water, still alive, ended up “run over by the boats trying to rescue them,” Cooper observed.[11]

At about the time of the third explosion, LCMs (landing craft, mechanized) with fire pumps departed East Loch for West Loch, while fireboats at Honolulu Harbor—14 nautical miles away—sped toward the disaster. Meanwhile, tugs and a few fireboats at West Loch were trying to tow the ships apart and douse the flames, but to no avail.

At 1650, LST-353, site of the first explosion and now adrift and in flames, sank. Other LSTs remained on the surface as burning, exploding specters of further destruction.

At the southern shore of the loch stood a massive ammunition depot, where the cargo ship Joseph B. Francis was unloading 350 tons of ammunition. Out of nowhere, it seemed, a phosphorous shell landed on her deck and detonated. The crew extinguished the fire in short order, but the shell reignited some minutes later, and the fires had to be fought anew. Still, Joseph B. Francis managed to escape the scene and destruction.

But the ammunition depot now stood in the way of three floating infernos: LST-43, LST-179, and LST-69, which now shuddered and lifted out of the water as a sudden explosion sent a fireball into the air. As the LSTs lumbered toward the facility, the fires on board crept higher and burned hotter. Explosions continued to issue from the decks and from deeper within the ships. Personnel at the depot braced themselves for the worst.

Mercifully, the ships came to a stop just 500 feet away from the ammunition depot.

The explosions continued for hours. Shortly before 2200, when things seemed to be under better control, LST-39 caught fire again. At 0130, LST-480 reignited. And even as late—or early—as 0510 on the following day, 22 May, the Pearl Harbor signal tower was reporting fire and smoke in the direction of West Loch.[12]

By 0800, finally, all of the fires were either out or contained, though some ships kept burning for days.[13]

With two thirds of personnel on shore leave when the initial explosion occurred, the death toll was nonetheless staggering. Samuel Eliot Morison, historian of naval operations during World War II and one of the first people to write about the disaster, puts the death toll at 163. A further 396 sustained injuries, many of them excruciating and grievous.[14] The scattering of ships and the departure for the Marianas a few days later meant that precise counts of casualties among Army, Navy, Coast Guard, and Marine Corps were impossible to compute.[15]

We know much more about the materiel losses: 6 LSTs, 3 LCTs, 17 amphibious tractors, and 8 Howitzers, to name just the greatest losses. Another two LSTs were so damaged, they could not be used for the invasion of Saipan.

And yet, for the crucial Saipan operation, there was no delay as a result of the disaster at West Loch. Reserve LSTs appeared in short order, and the survivors of West Loch arrived at Saipan on schedule. There, they saw a familiar sight, according to Cooper: “landing craft turned upside down on the reef. . . [and] all sorts of vehicles and equipment on fire. The dead and wounded were. . . everywhere.”[16] This time, however, the cause was clear—Japanese resistance to the American onslaught.

There is no consensus on what caused the first explosion at West Loch, which set off the sequence of events that produced one of the greatest non-combat disasters in U.S. history.

Evidence after the fact, including eyewitness reports, shows plenty of risk factors. Men were seen smoking cigarettes near gasoline drums. Welding had been underway on deck. A Navy intelligence report hypothesized a dropped mortar shell. The mystery endures because no one close enough to the initial blast survived to give account of what he saw.

The first lesson: Facilities for loading gasoline and facilities for loading ammunition must be kept separate. Secondly, safety precautions, such as smoking bans, must be enforced with the utmost rigor. And finally, mooring berths, especially for LSTs, must be designed in such a way as to minimize the risk of fire and maximize the chances of escape.[17] 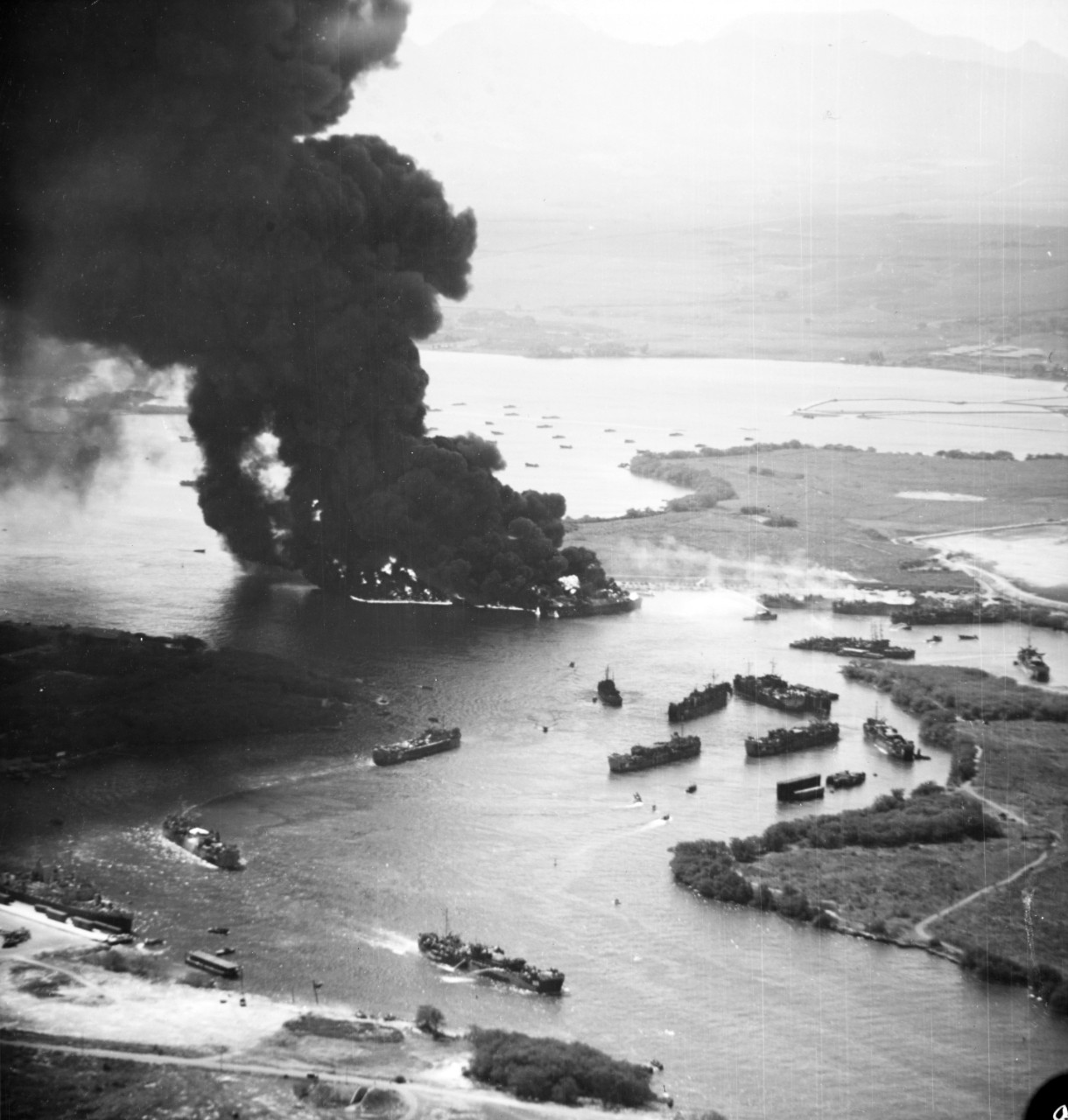 Pearl Harbor LST explosion, 21 May 1944. Aerial photograph of Pearl Harbor’s West Loch, showing the burning LSTs at berths T-8 and T-9. Some LSTs are maneuvering in the foreground, leaving the vicinity of the explosions and fire, while other ships have yet to get underway (80-G-276907). 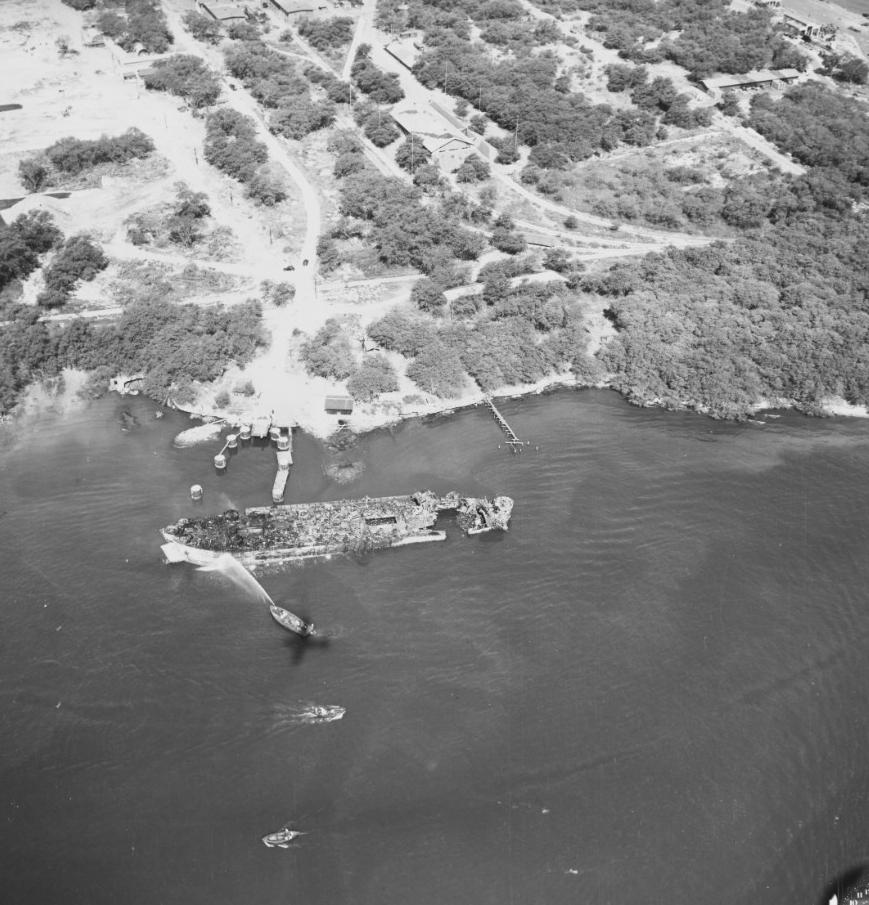 Pearl Harbor LST Explosion, 21 May 1944. USS LST-39 burned out and grounded off the Ferry Dock at Naval Ammunition Depot, Pearl Harbor. Photographed on 22 May 1944, the day after the explosions and fire which destroyed six LSTs in West Loch. Official U.S. Navy photograph, now in the collections of the National Archives, 80-G-276940. 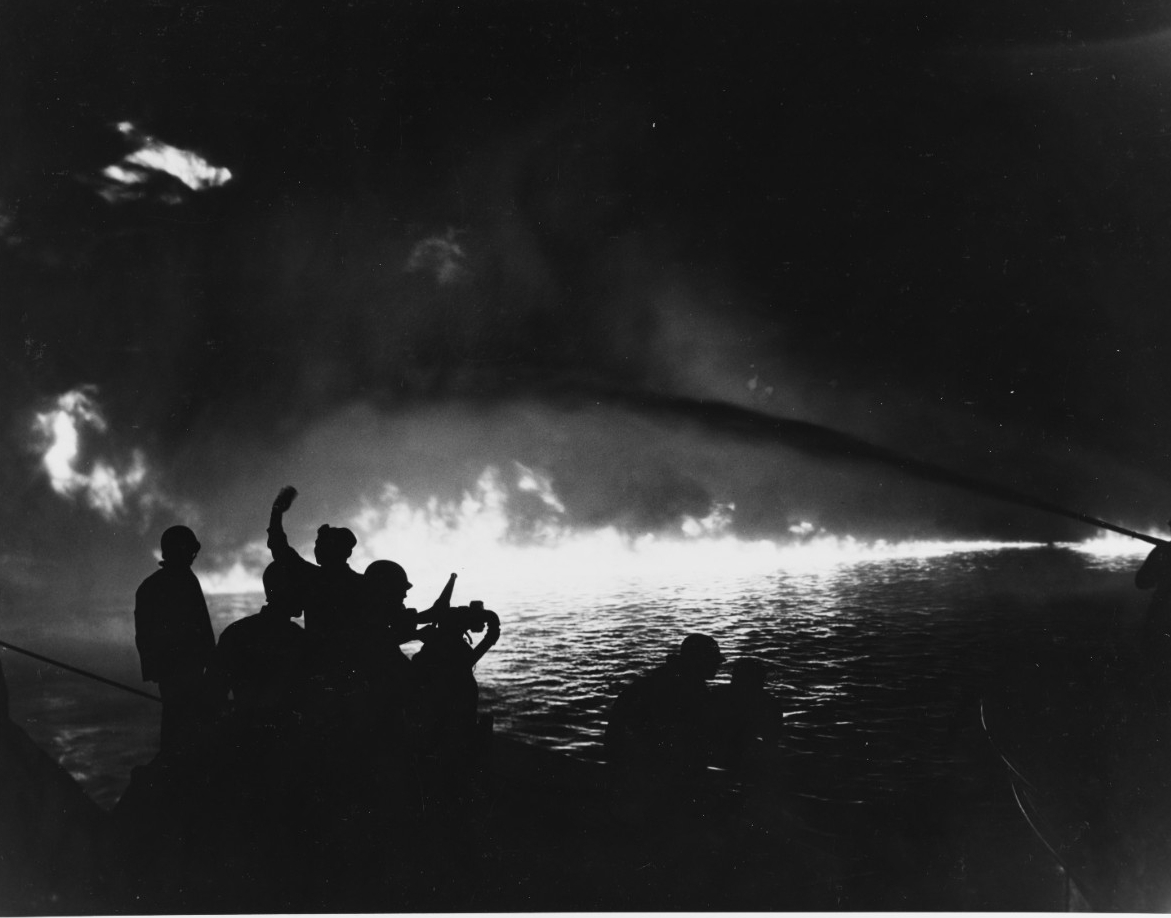