A key part of Operation Forager, the amphibious assault—actually the recapture and liberation—of the U.S. territory of Guam, captured by the Japanese on 7 December 1941, was originally planned for 18 June 1944. However, it had to be postponed for over a month due to the Battle of the Philippine Sea and the unexpected ferocity of enemy resistance on Saipan. Based on the Saipan experience, an additional Army division—the 77th Infantry Division, fresh from amphibious and jungle warfare training in Hawaii (which would greatly enhance its interoperability with the Marines)—was allocated to the III Amphibious Corps (3rd Marine Division, 1st Provisional Brigade), commanded by Major General Roy. S. Geiger, USMC. Task Force 53 (Fifth Fleet’s Southern Attack Force), commanded by Rear Admiral Richard L. Connolly, comprised the assault shipping, naval gunfire support, and naval air support for the landings on Guam, set for “W-day,” 21 July.

Guam, the southernmost of the Marianas, was defended by approximately 19,000 Japanese personnel, most of them combat troops, with many well-constructed defensive positions. The island had been subjected to naval air strikes by Task Force 58 (Fast Carrier Task Force) on 11–12 June and again on 19 June during the Battle of the Philippine Sea. On 16 June, a naval bombardment in preparation for the aborted 18 June landings was carried out, but the Japanese garrison then had a respite until 8 July, when Connolly began a systematic bombardment that was to continue through W-day. This was augmented by naval air strikes.

Prewar information on Guam’s terrain and hydrography was available, but more recent intelligence, particularly imagery of possible landing beaches, had been collected since April by U.S. Navy submarines. This were augmented by aerial photographs and, on 14 and 15 July, by reconnaissance missions undertaken by underwater demolition teams (UDT). The specific focus of the “frogmen” was the presence of underwater obstacles and assessing the suitability of beaches to support large-scale landings. Beginning on 18 June, UDT personnel blew up nearly 1.000 Japanese-planted coral-and-concrete boxes off the designated landing beaches at Asan (northern sector—“Red,” “Green,” and “Blue”) and Agat (southern sector—“Yellow” and “White”), both on Guam’s western side.

On W-day, the 3rd Marine Division landed at Asan while, to the south on the other side of Apra Harbor and the Orote Peninisula, the 1st Provisional Brigade landed at Agat. The 77th Infantry Division was initially retained as a floating reserve off the southern sector beaches. At Asan, landing craft were barred from direct access to the beaches by a coral reef. Thus, 3rd Division Marines were transferred at the reefline from their landing craft to amphibious tractors (LVT), which carried them to shore. In both northern and southern sectors, landing forces met with determined Japanese resistance. Moreover, although the pre-invasion bombardments and air strikes—and the fire support during the landings—had destroyed many Japanese above-ground defensive positions and facilities, enough remained concealed on reverse slopes or underground to slow the U.S. advance.

In the northern sector, the Marines faced several serious counterattacks, which they were able to repulse. Loss of many of their officers and naval gunfire on their assembly areas kept the Japanese from effectively reinforcing their thrusts into the U.S. lines. In the first week after the northern sector landings, despite serious losses, the 3rd Marine Division had consolidated its beachhead and advanced toward the center of the island.

Meanwhile, the landing force at Agat faced tenacious defenders and pre-sighted mortar and artillery fire, which immobilized numerous LVTs. By the afternoon, Agat village had been captured, but fierce fighting continued. Loss of the LVTs hampered the logistics chain and also delayed landing Army troops of the 77th Infantry Division. Japanese counterattacks, in part supported by tanks, continued through the night, but could be fended off. Naval vessels provided star shell illumination and fire support throughout.

Marines in the southern sector subsequently fought their way north onto the Orote Peninsula and its airfield. A final Japanese banzai charge occurred during the night of 25 July, but was beaten off. On the afternoon of 28 July, Orote had been secured by the Marines. Meanwhile, the 77th Infantry Division pushed east and north to link up with northern sector forces. In a fighting withdrawal, the remaining Japanese forces slowly retreated to Guam’s mountainous northeast around Mount Santa Rosa.

On 31 July, the 3rd Marine Division and 77th Infantry Division, with the 1st Provisional Brigade in reserve, began the final U.S. push. The town of Agana was entered that same day and the units had reached their daily objectives—key points in the Guam road network—by that evening. The advance continued into the first August week. The 77th Infantry Division assaulted and captured Mount Santa Rosa on 7–8 August. Marines and Soldiers reached key points on Guam’s northern and eastern coasts by 8 August and, two days later, Major General Geiger was able to announce that organized resistance on Guam had ended.

Despite the presence of a small number of Japanese military personnel who held out in the island’s jungles until after Japan’s surrender, Guam was subsequently transformed into a major logistical base that would support the upcoming liberation of the Philippines.

The U.S. landings on the island of Tinian were an adjunct to the July 1944 amphibious assault on Saipan and were actually carried out before Saipan was fully secured. Tinian is located just under six miles southwest of Saipan and lent itself well to the “shore-to-shore” concept envisioned by General Holland M. Smith, USMC, commander of V Amphibious Corps (2nd and 4th Marine Divisions, U.S. Army 27th Infantry Division). Actual operational planning occurred during the transit of the corps staff from Pearl Harbor to the Marianas prior to the Saipan assault. Task Force 58 carrier aircraft commenced strikes on Tinian on 11 June (later strikes by U.S. Army Air Forces fighter-bombers, on 22 July, included the first use of napalm). Naval bombardment of the island began on 14 June. On 20 July, once the southern portion of Saipan had been secured, heavy artillery from the U.S. Army’s XXIV Corps was sited there and began bombarding the northern half of Tinian. The landing forces themselves—elements of two Marine divisions and an Army regimental combat team—were to be drawn from those already engaged on Saipan. Since significant intelligence gaps concerning the island’s terrain and coastal hydrography had been identified, numerous photo-reconnaissance missions were flown and data on potential landing beaches were gathered by underwater demolition teams.

Tinian possessed few viable landing areas. The best ones fronted Tinian Town on the island’s southwestern side. However, a landing there would immediately be confronted by the primary concentration of Japanese forces. The “Yellow” beaches, on Tinian’s rocky northeastern shore, were found to be heavily mined, had many natural underwater obstacles offshore, and were fortified with pillboxes and trenches. In contrast, the “White” beaches, to the northwest, presented very few obstacles and defenses, but were very narrow, limiting the frontage of an assault. Vice Admiral Richmond K. Turner, commander of Task Force 51, the joint expeditionary force, ultimately decided to land his forces on the White beaches. Moreover, Tinian’s Japanese defenders were to be confused by a diversionary feint at the Tinian Town beaches.

The limited size of the landing beaches called for a number of specialized preparations. At the most, only 16 LVTs would be able to land abreast (in contrast to nearly 100 on Saipan’s Charan Kanoa beaches). Thus, the assault waves would need to exit the beach area quickly. Predicated on rapid movement away from the landing areas, and to avoid logistical pile-ups on the narrow beaches, supplies and ammunition were be moved inland before being handled. This entailed both an ongoing shuttle operation of amphibious vehicles and landing vessels between Saipan and Tinian, and landing preloaded trucks. The White beaches were flanked by low coral cliffs. Accordingly, a number of LVTs were fitted with ramps that could be tilted down to facilitate vehicle movement over these low obstacles. In practice, this measure also had the effect of extending the available beach area.

Code-named “J-day,” the assault on Tinian was set for 24 July. The diversion offshore at Tinian Town, conducted by the embarked 2nd Marine Division, was particularly effective, leaving the Japanese with the impression that an assault landing had been fought off. The forces allocated to the feint then joined the main assault of the 4th Marine Division on the White beaches in the northwest. Here, the first two assault waves made rapid progress off the landing areas, meeting little enemy resistance. Bulldozers were landed to improve the beach exits, followed by the first supply vehicles, which headed inland to already secured unloading areas. Toward the evening of J-day, two pontoon causeways were towed over to the White beaches from Saipan. Once in place, these further accelerated logistical support.

Ongoing naval gunfire support and aerial close-support missions greatly impacted Japanese command and control, and attempts to move forces. The Saipan-based XXIV Army Corps heavy artillery was very effective in supporting the landings and inland movement, particularly once Marine forward observers were able to call for fire missions. Thus, progress southward was steady despite a series of desperate counterattacks by the greatly outnumbered Japanese. By the end of July, U.S. forces had captured four fifths of Tinian, including Tinian Town. In comparison with the Saipan operation, American losses were low: 389 killed and 1,816 wounded. Few enemy prisoners were taken; the majority of the roughly 9,000 Japanese soldiers and their commanders preferred death in battle or by suicide to capture. However, the incidents of suicide by Japanese civilians residing on Tinian were minimal in comparison to those experienced on Saipan. On 1 August 1944, Tinian was declared secure. Often characterized as “the” perfect amphibious operation of the Pacific War, the capture of Tinian came about due to meticulous and imaginative planning, allocation of forces vastly superior in number to the defenders, the close proximity of a logistics and fire-support base (Saipan), flawless execution, and overwhelming gunfire and air support.

By December 1944, following the progressive extension of existing Japanese airfields and new construction, Tinian became a major base for the strategic bombing raids against Japan’s Home Islands. The Army Air Forces’ 509th Composite Wing, whose aircraft were to carry out the two atomic bomb missions, was deployed to the island’s North Field in May 1945. 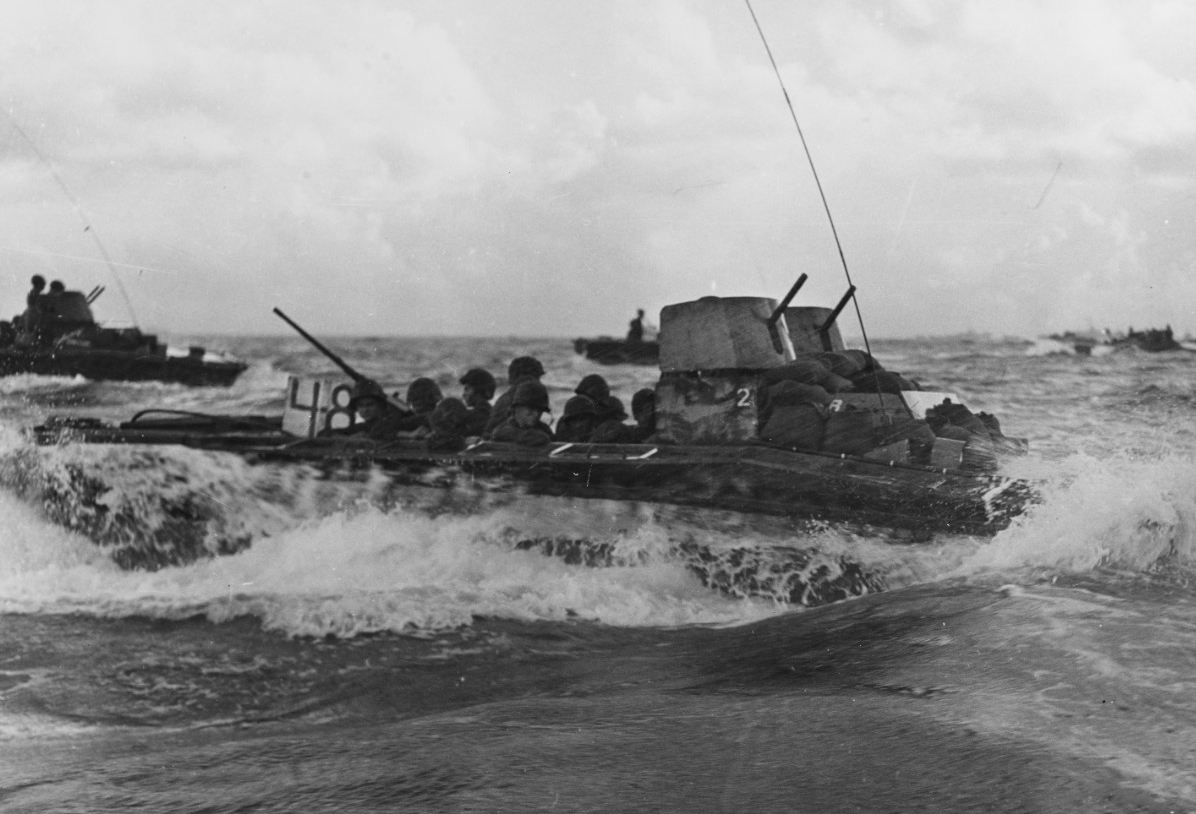