As the fighting Seabees turn 75 this year, it is fitting that we pause to reflect on the monumental achievements of this renowned organization, as well as examine their shining example that still speaks to us with strong relevance in 2017.

Born of necessity in the desperate early phases of World War II, the Navy Construction Battalions quickly filled a critical gap in the prosecution of the global war strategy. (The acronym for Construction Battalion “CB” quickly led to the name “Seabees”, and the famous logo of the angry, determined bee soon followed.) Since forward operating bases mostly did not exist in the early 1940s, a construction capability was needed—and quickly. The men who would be doing the construction, of course, were of necessity going to be doing the building in the shadow of the enemy. Therefore, the men of the Seabees had to be skilled at construction and trained in combat.

The idea for a cadre of fighter/builders was born in the mind of Rear Admiral Ben Moreell, Chief of the U.S. Navy Bureau of Yards and Docks and of the Civil Engineer Corps. Moreell gained permission for the formation of the Seabees on 5 January 1942. He immediately began a recruiting effort among the nation’s skilled building trades. He also supplied the Seabees with their motto: Construimus, Batuimus—We Build, We Fight. The admiral’s Distinguished Service Medal citation, presented in 1945 for World War II service, captured the spirit that he personally displayed and that he fully instilled in the Seabees:

“Displaying great originality and exceptional capacity for bold innovation, he inspired in his subordinates a degree of loyalty and devotion to duty outstanding in the Naval Service, to the end that the Fleet received support in degree and kind unprecedented in the history of naval warfare.”

Bold innovation in the face of a determined enemy, and often without sufficient tools or material, became a hallmark of the Seabees. The initial waves of Seabees differed from the average military recruit. Coming from the ranks of America’s tradesmen, they were older and more experienced. The age range for enlistment was 18–50, but it was later discovered that several men past 60 had managed to join up. By the end of the war, 325,000 men representing more than 60 trades became Seabees.[i] Accounts of the period describe how these tradesmen were grimly focused on going forward to the battle zones and simply getting the job done, no matter what it took. 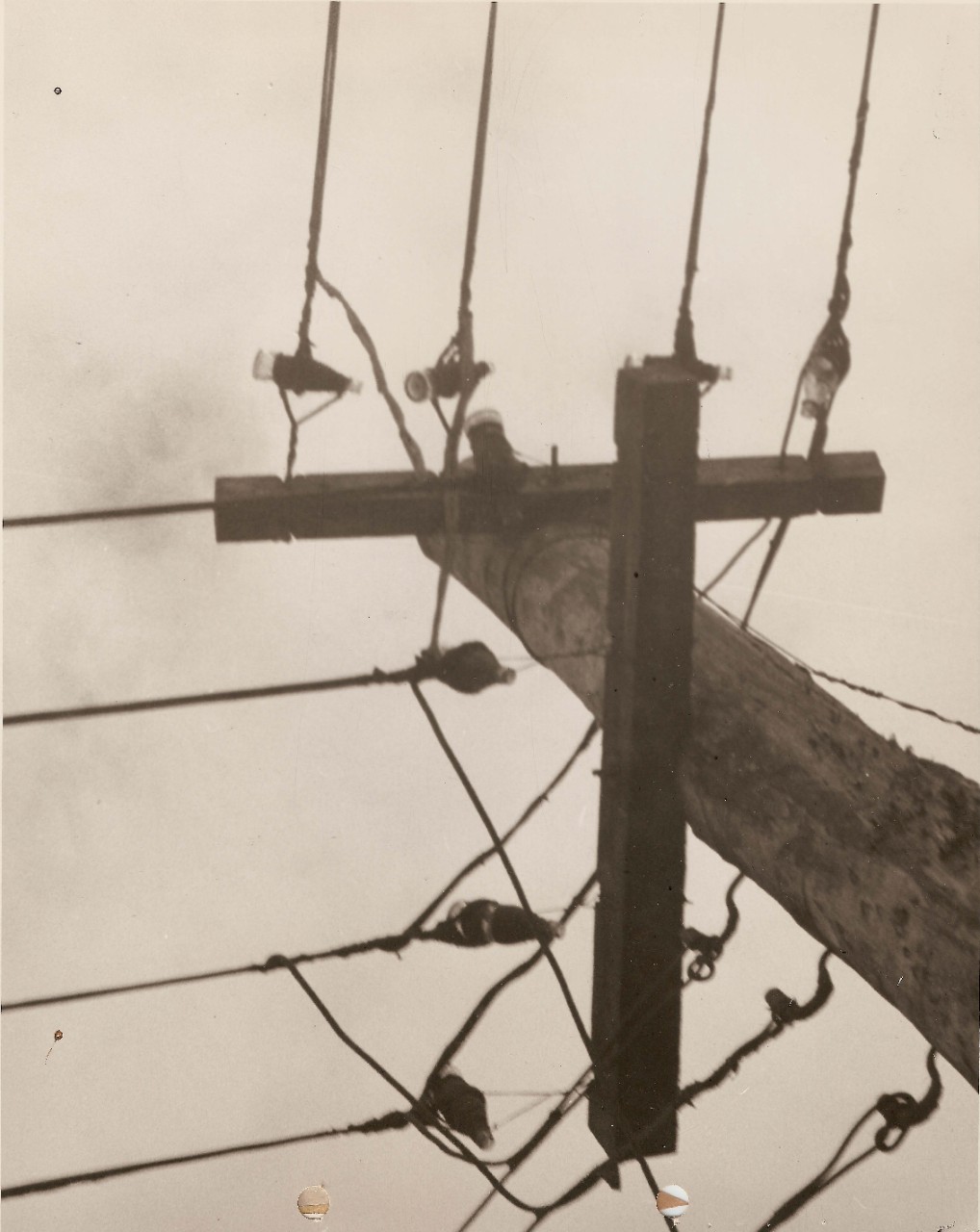 The Seabee’s main job was to build and maintain forward operating bases, including air fields, repair facilities, barracks, entertainment venues, and all other infrastructure required by the war effort. When the job called for stringing electric lines across a forlorn Pacific island, and glass insulators were not on hand, the Seabees pressed Coke bottles into service in place of the insulators. In other examples of ingenuity, Seabees used thin sheets of metal and paper to replace gaskets on bulldozers, and kept captured Japanese trucks in operation by improvising replacement radiators out of metal ammo boxes.

The Seabees hung a sign in the newly constructed base on Bougainville:  “The difficult we do now, the impossible takes a little longer.”

During World War II, the Seabees constructed more than 400 advanced bases across the Pacific to Asia and across the Caribbean and Atlantic to African and European shores.

The Seabees also frequently landed with assault forces in both the Atlantic and Pacific campaigns. Because the construction battalions  worked with demolition teams, they often were among the first ashore in an invasion. From North Africa, to Sicily, Anzio, Southern France, the beaches of Normandy, and the crossing of the Rhine, the Seabees were integral to the fight. Their innovation of the “magic box,” a floating steel structure of standard size, was the main component of the pontoons that were often integral to invasion plans. The box enabled rapid assembly of the pontoons which allowed Allied forces to overwhelm enemy troops with great rapidity. After an invasion, the magic box was used to construct self-propelled barges, floating dry docks, seaplane ramps and bridges, which further enabled the flow of logistic support.[ii]

As noted by the Naval History and Heritage Command, “In the North, Central, South and Southwest Pacific areas, the Seabees built 111 major airstrips, 441 piers, 2,558 ammunition magazines, 700 square blocks of warehouses, hospitals to serve 70,000 patients, tanks for the storage of 100,000,000 gallons of gasoline, and housing for 1,500,000 men. In construction and fighting operations, the Pacific Seabees suffered more than 200 combat deaths and earned more than 2,000 Purple Hearts. They served on four continents and on more than 300 islands.”[i]

A shining example of Seabee work was the construction of the airfield at Espiritu Santo. The island is near Guadalcanal and American forces desperately needed a base from which to attack the Japanese airfield that was rapidly nearing completion there. Within 20 days, the Seabees completed a 6,000-ft. airstrip from the Espiritu Santo jungle, enabling the destruction of the Japanese airfield that would soon have threatened the sea lanes to Australia.[i] 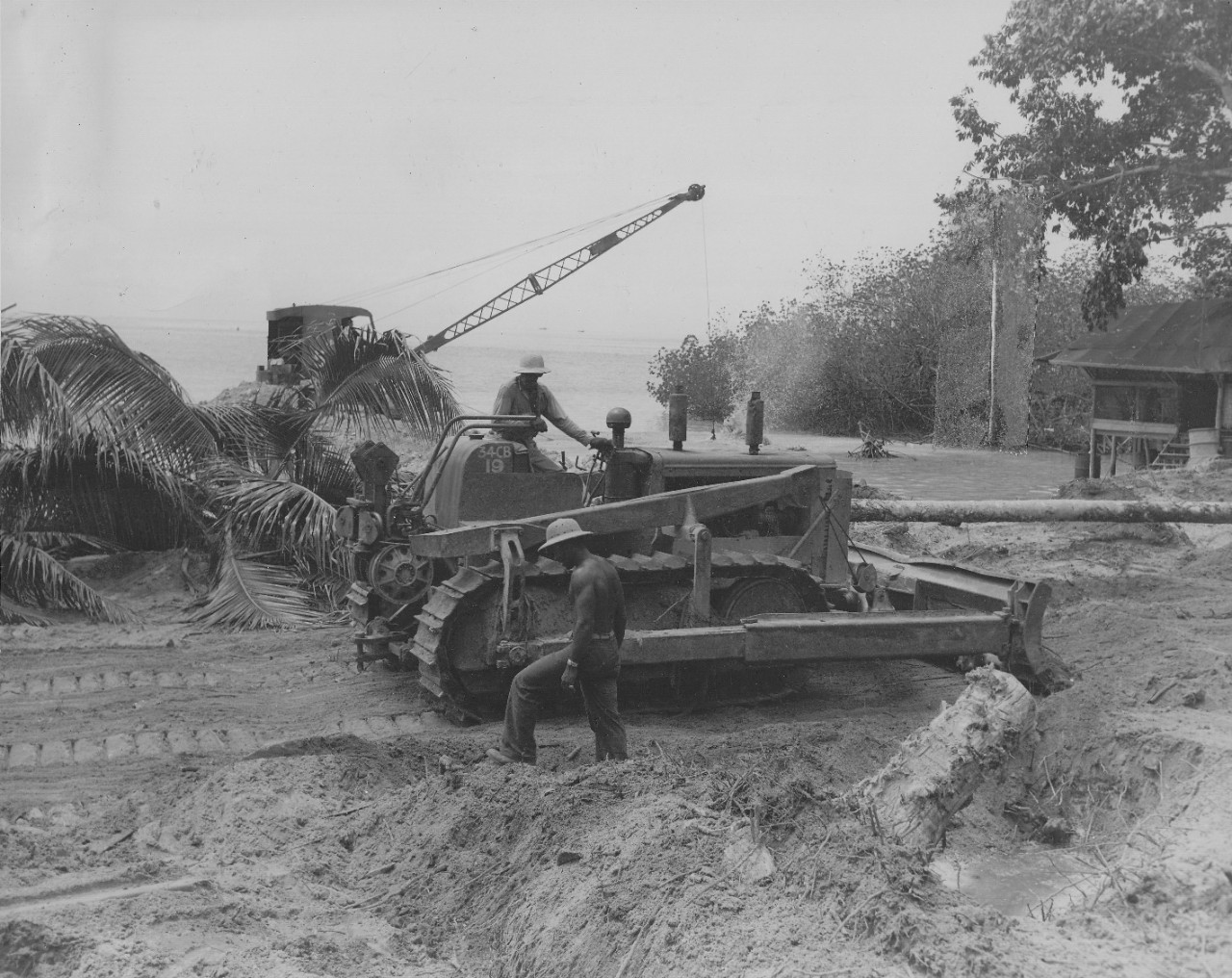 Seabees with the 34th NCB use a dozer to pull a Seaplane onto shore. 34 NCB, WWII. U.S. Navy Seabee Museum Photo

Alongside the Seabee’s numerous feats of construction, there were many acts of heroism. The Naval History and Heritage Command describes one such action.

It was during the landing on Treasury Island in the Solomons, on 28 November 1943, that Fireman 1st Class Aurelio Tassone, USNR, of the 87th Naval Construction Battalion created that legendary figure of the Seabee astride his bulldozer rolling over enemy positions. Tassone was driving his bulldozer ashore during the landing when Lieutenant Charles E. Turnbull, CEC, USNR, told him a Japanese pillbox was holding up the advance from the beach. Tassone drove his dozer toward the pillbox, using the blade as a shield, while Lieutenant Turnbull provided covering fire with his carbine. Under continuous heavy fire, Tassone crushed the pillbox with the dozer blade, killing all 12 of its occupants. For this act Tassone was awarded the Silver Star. Although Seabees were only supposed to fight to defend what they built, such acts of heroism were numerous. In all, Seabees earned 5 Navy Crosses and 33 Silver Stars during the war. But they also paid a price: 272 enlisted men and 18 officers killed in action. In addition to deaths sustained as a result of enemy action, more than 500 Seabees died in accidents, for construction is essentially a hazardous business.[i]

To say that the Seabees were a strategic advantage is an understatement. Their capabilities, ingenuity, and tenacity were unmatched in the ranks of the enemy. Whether they were building airfields and bases in the Pacific, or enabling Allied invasion forces on the shores of France, they built and repaired support facilities at a rate that overwhelmed the enemies’ capacity to damage them.

As we reflect on the Seabees of World War II, on their 75th Anniversary, there are several lessons learned that are applicable to our present world.

The first lesson is that organizations from their outset must be designed with a clarity of mission and purpose that matches the task at hand and that it galvanizes wide support among existing military and government organizations. The design of the organization must provide the inspiration that leads to the recruitment of the best and brightest. In 1942, the entire nation understood that there was a job to do, and Rear Admiral Moreell held out the vision of the Seabee job like a torch. The best tradesmen and young recruits from America’s farms and cities were drawn to that flame. The admiral’s motto—We Build, We Fight—provided a sharp focus for the nascent unit.

An organization must also be given sufficient latitude and authority to innovate without bureaucratic entanglement or micro management. In 2017, many of us no doubt look back with nostalgia and yearn for a simpler time when great things were achieved with lesser resources.

The World War II Seabees were indeed members of one of America’s greatest generations. Having been raised in the hardships of the early 20th century, they were by nature self-starters, independent and ingenious. But, as subsequent generations of Seabees demonstrated, the era in which one was raised was not the sole factor of success. History has shown that the design of an organization has the ability to take people from any cloth and either inspire them to great achievement, or demoralize and encourage mediocrity. In the opening decades of the 21st century, let us all hope that our nation will look to the example set by the Seabees of World War II. They achieved things of a magnitude that, given the limited resources of the time, have yet to be duplicated. We also know that America will inevitably again face a large national emergency. May we all take the time to learn from the past, and pray that we emulate the Seabee example of 75 years past.

[i] Seabee History: The Formation of the Seabees and WWII