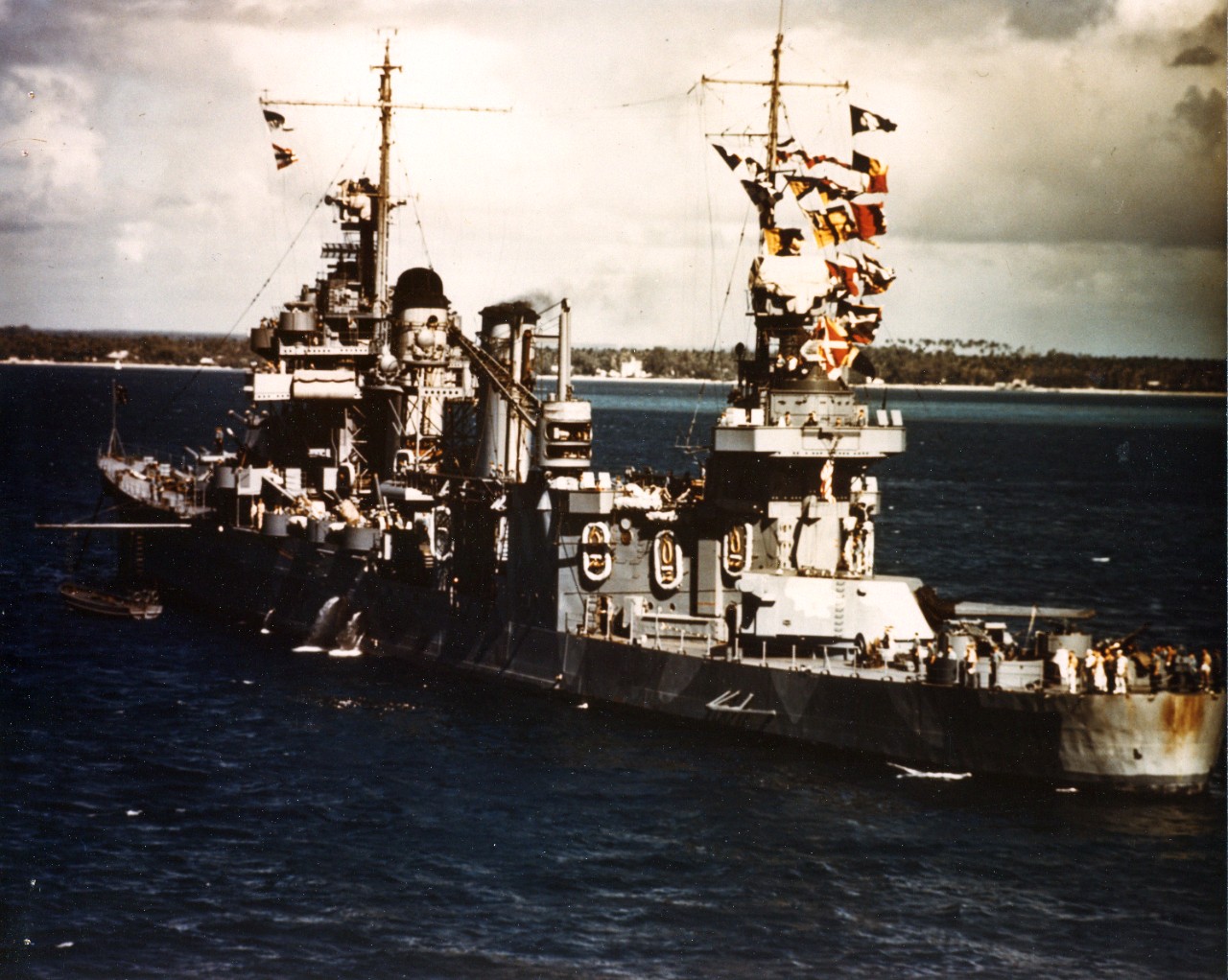 USS Quincy (CA-39) photographed from USS Wasp (CV-7) at Noumea, New Caledonia, on the eve of the invasion of Guadalcanal, 3 August 1942. She was sunk six days later, during the Battle of Savo Island. Note Quincy's signal flags and Measure 12, Modified, camouflage scheme (80-G-K-563).

The Battle of Savo Island, also known as the First Battle of Savo Island, took place on 8–9 August 1942 and was the first major naval engagement of the Guadalcanal campaign—the first of several naval battles in the straits later nicknamed “Ironbottom Sound” near the island of Guadalcanal. On 7 August, the Imperial Japanese Navy, in response to Operation Watchtower, the Allied amphibious landings in the eastern Solomon Islands of Guadalcanal, Tulagi, Florida, Gavutu, and Tanambogo, quickly mobilized a task force of seven cruisers and one destroyer under the command of Vice Admiral Mikawa Gunichi. The task force sailed from Japanese bases in New Britain and New Ireland southward, down the New Georgia Sound (also known as "the Slot"), with the intention of interrupting the Allied landings by attacking the screening force of the Allied amphibious fleet. This consisted of eight cruisers and 15 destroyers under British Rear Admiral Victor A.C. Crutchley, RN, but only five cruisers and seven destroyers were involved in the battle. In a night action, Mikawa thoroughly surprised and routed the Allied force, resulting in the loss of four heavy cruisers (three U.S. cruisers sunk and the fourth, an Australian cruiser, scuttled), while suffering only light damage in return. The battle has often been cited as the worst defeat in the history of the United States Navy.

The historical narrative for the Battle of Savo Island was largely shaped by three studies. The first was the U.S. Navy’s official board of inquiry regarding the conduct of the battle, which was initiated in December 1942. Headed by Admiral Arthur J. Hepburn, chairman of the General Board of the Navy, the board’s findings were commonly referred as the Hepburn Investigation Report. The second was Captain Samuel E. Morison’s The Struggle for Guadalcanal, August 1942-February 1943: History of United States Naval Operations in World War II, Volume 5 (History of the United States Naval Operations in World War II), which was published in 1949. Having based his study in part on the findings of the Hepburn Report and on the comments of senior officers pursuant to it, Morison concluded his narrative of the battle with the phrase “The present writer has little to add.” Morison did, however, imply a heightened level of culpability to the Australian reconnaissance flight that observed the approach of the Japanese, but failed to track the force as it headed down the Slot. This in large part led to the drafting of at least two volumes in response, namely by the Warners and by Loxton and Coulthard-Clark, both listed in the bibliography below. The third contribution to the formative narrative was the 1950 study of the battle by the Naval War College. Those works drafted after 1950 cite these three studies and constructed their narratives accordingly.

Coggins, Jack. The Campaign for Guadalcanal: A Battle That Made History (New York: Doubleday, 1972).

Prados, John. Islands of Destiny: The Solomons Campaign and the Eclipse of the Rising Sun (New York: New American Library, 2012)