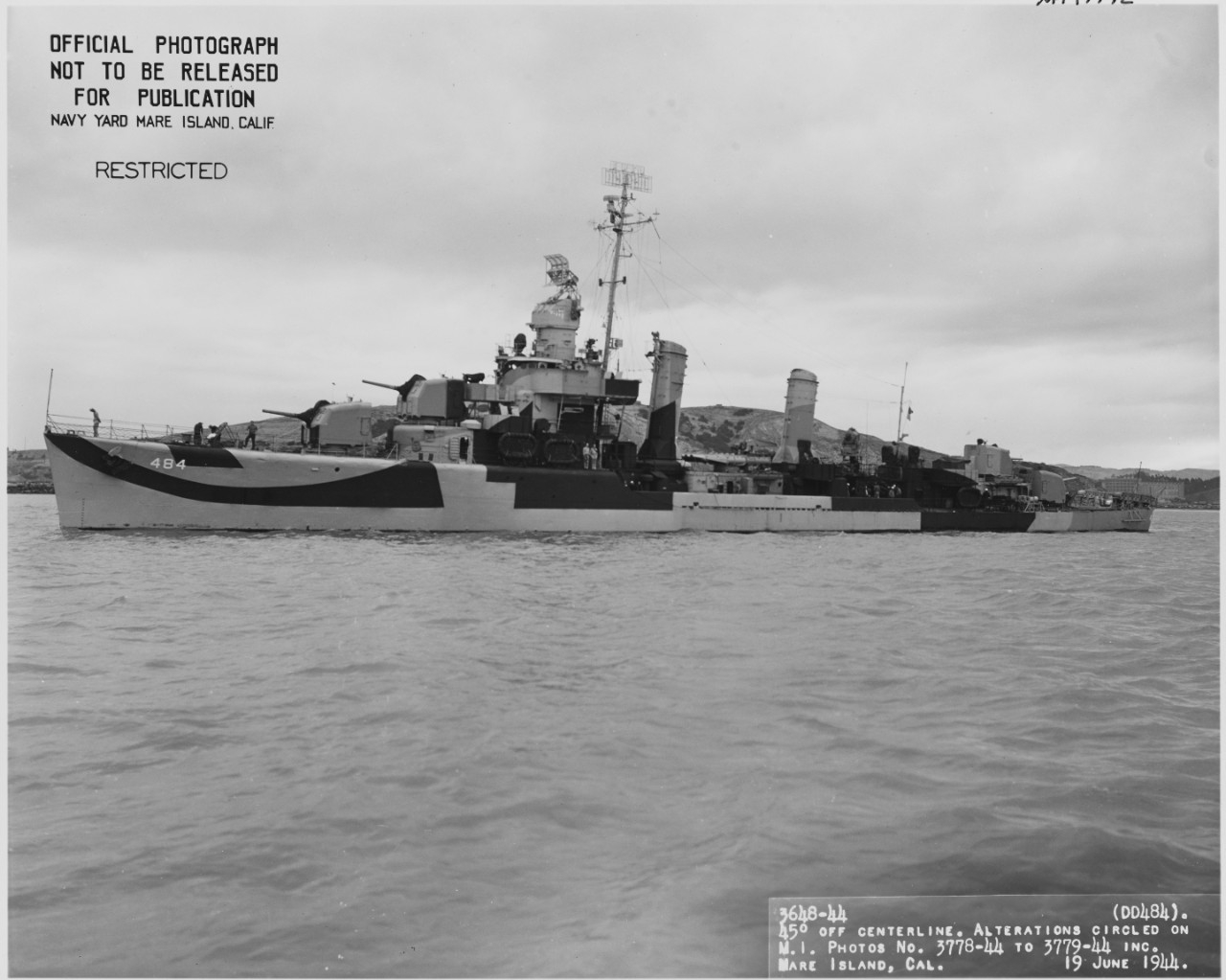 Buchanan (DD-484) off the Mare Island Navy Yard, California, after overhaul, 19 June 1944. The ship is painted in camouflage Measure 31 Design 3d. Official U.S. Navy photograph, from the collections of the Naval History and Heritage Command. Catalog#: 97772

Franklin Buchanan, born at “Auchentorlie,” in Baltimore, Md., on 17 September 1800, was appointed a midshipman in the Navy on 28 January 1815 and initially served in the frigate Java under Capt. Oliver Hazard Perry. After tours of duty in a succession of ships, mostly in the Mediterranean, Buchanan obtained permission from the Navy Department to enter the merchant service and worked for five years as a mate in a merchantman on a voyage to China. Following that interval, Buchanan returned to the Navy and spent the next six years in a series of ships engaged in the suppression of piracy in the West Indies. Having been appointed a lieutenant on 13 January 1825, Buchanan delivered the frigate Baltimore to the Emperor of Brazil the following July.

Following another Mediterranean cruise in the frigate Constellation, he then served as first lieutenant in the ship-of-the-line Delaware, which bore the United States minister to France, Edward Livingston, to his diplomatic post; and Buchanan was among the officers invited to dine with King Louis Philippe.

Buchanan then went ashore post at the Philadelphia Navy Yard to perform duty involving the testing of cannon after which service he commanded the receiving ship at Baltimore. He joined the frigate Constitution in April 1839 and sailed for the Pacific where he later served on board the sloop Falmouth. Buchanan returned home to the United States in June 1840. Promoted to the rank of commander on 8 September 1841, he received command of the steam frigate Mississippi. Shortly thereafter, however, he was transferred to command of the sloop Vincennes in which he spent almost two years hunting slave traders and pirates.

Secretary of the Navy George Bancroft had ordered Buchanan to submit a plan for organizing a new naval school at Annapolis, and on 14 August 1845, he was appointed the first superintendent of what would become the United States Naval Academy. He occupied that post from the school's formal opening on 10 October 1845 until 2 March 1847. In establishing the academy's high standards of discipline and efficiency, Buchanan earned Bancroft's praise for his "precision and sound judgment," and his "wise adaptation of simple and moderate means to a great end...."

His application for active service in the Mexican War accepted, Buchanan commanded the sloop Germantown, which, during his time in command, participated in the operations against Tuxpan on 18 April 1847 and at Tabasco on 16 June 1847. After another tour ashore, this time in Baltimore, Buchanan took command of the steam frigate Susequehanna, which he commanded when she served as flagship for Commodore Matthew Calbraith Perry's expedition to Japan.

Made a member of the Board of Officers to Promote Efficiency in the Navy on his return from Japan, Buchanan soon thereafter became commandant of the Washington Navy Yard. On 14 September 1855, he received promotion to the rank of captain. He was holding that rank when, under the impression that Maryland would secede from the Union, he submitted his resignation from the Navy on 22 April 1861. Soon convinced that North and South could achieve a reconciliation, however, he wrote the Navy Department asking to withdraw his resignation. Nevertheless, Secretary of the Navy Gideon Welles dismissed Buchanan from the service on 14 May 1861.

Appointed a captain in the Confederate Navy on 5 September 1861, Buchanan served as the Chief of the Bureau of Orders and Detail until 24 February 1862, when he assumed command of the Chesapeake Bay Squadron. Flying his pennant in ironclad CSS Virginia, Buchanan surprised a Union squadron in Hampton Roads on 8 March 1862. Virginia destroyed the frigate Congress, the sloop Cumberland, and three smaller steamers. Late in the action, Capt. Buchanan, enraged at Union troops who violated naval etiquette by firing on his men when they tried to take the surrender of Congress, went topside to return the fire with a Sharps carbine, but a Union sharpshooter’s Minié ball shattered his left thigh. The wound prevented him from exercising command the following day when Virginia met the Union ironclad Monitor in Hampton Roads.

Commended nonetheless for his "gallant and meritorious conduct," Buchanan was promoted to rear admiral on 26 August 1862. Thus becoming the ranking officer in the Confederate States Navy, he was given command of the South's naval forces at Mobile Bay. Wearing his flag in the ironclad ram Tennessee, Rear Admiral Buchanan led a daring single-ship attack against Rear Admiral David Glasgow Farragut's entire squadron in the Battle of Mobile Bay on 5 August 1864 after all his other ships had been either captured or driven off. Damage to his flagship compelled Buchanan, who had again been seriously wounded, to surrender. He remained a prisoner of war until exchanged in February 1865.

Returning to his home in Maryland's Talbot County, "The Rest," after the war, he later became president of the Maryland Agricultural College (later the University of Maryland) in September 1868. He remained in that post until June 1869, after which time he served as secretary of the Alabama branch of the Life Insurance Company of America. After about a year in that line of work, he once again returned to "The Rest," where he ultimately died on 11 May 1874.

Buchanan got underway for the Pacific 28 May 1942. She played an effective role in the landings at Guadalcanal and Tulagi (7-9 August) and on 9 August she was present during the Battle of Savo Island and rescued many survivors of Astoria (CA-34), Quincy (CA-39), Vincennes (CA-44), and HMAS Canberra, sunk during the battle. In September she escorted Wasp (CV-7) and other units to Noumea, New Caledonia. Shortly there after, as part of TF 64.2, Buchanan assisted in the occupation of Funafuti Island in the Ellice Islands.

On the night of 11-12 October, as a unit of TG 64.2 Buchanan took part in the Battle of Cape Esperance. On 12 November the destroyer was damaged during the initial stages of the Naval Battle of Guadalcanal when she was accidentally hit by U. S. naval gunfire. She suffered the loss of five of her crew and had to withdraw from the action. After undergoing repairs, she was assigned to convoy escort duty until February 1943.

After leave in Sydney, Australia, Buchanan joined the screen of TF 15. On 30 April 1943, while screening in convoy, the ship ran aground off the southern coast of Guadalcanal and, after jettisoning heavy gear and ammunition, she was eased off th e reef by three tugs. She proceeded to Espiritu Santo New Hebrides, for repairs. Repairs completed, she participated in the New Georgia Group operations (30 June-13 July) and while under heavy attack she effectively bombarded the enemy shore batteries dur ing the invasion of Rendova. She participated in the bombardment of Munda (12 July) and the Battle of Kolombangara (13 July). Buchanan was damaged when she collided with Woodworth (DD-460) during the latter engagement and retired to Noumea f or repairs. During the ensuing months, Buchanan convoyed ships to Noumea, Espiritu Santo, and Guadalcanal. She participated in the Treasury-Bougainville operation (1-11 November), taking part in the Rabaul and Buka-Bonis strikes. Next, as a unit of TF 38, she bombarded Shortland Island and Bougainville (8 and 13 January 1944). On 22 January, while going to the rescue of the torpedoed oiler Cache (AO-67), Buchanan hunted down and sank the Japanese submarine RO-37 in 11°47' S., 1 64°17' E.

During February the destroyer participated in various phases of the Bismarck Archipelago operation (15 February-1 March). She covered the Green Island landings and took an active part in the bombardment of Kavieng, Rabaul, and New Ireland before steaming to the United States to undergo a yard overhaul at Mare Island.

Upon completion of overhaul and refresher training Buchanan returned to the Pacific and served with the transport screen during the assault and capture of the southern Palaus (6 September-14 October 1944) . She next participated in the strikes a gainst Luzon between 14 and 16 December. On 18 December she was damaged by a typhoon in the Philippine Sea. Upon completion of repairs she engaged in attacks on Luzon, Formosa, and the China coast (6-16 January 1945) in support of the Luzon operation. During the remainder of World War II she participated in the Iwo Jima invasion (15 February-5 March ), Okinawa operation and supporting 3d and 5th Fleet raids (16 March-30 June); as well as the 3d Fleet operations against Japan (10 July -15 August 1945).

On 29 August she entered Tokyo Bay escorting South Dakota (BB-57). On 1 September she carried Fleet Admirals Nimitz and Halsey from their respective flagships to Yokohama where they met with General MacArthur and then returned them to the fleet. The following day she carried General MacArthur to Missouri (BB-63) where he accepted the Japanese surrender and then returned him to Yokohama. She remained on occupation duty in the Far East until 8 October and then departed for San Francisco whe re she arrived 20 October. Buchanan steamed to Charleston, S. C. for pre-inactivation overhaul and went out of commission in reserve there 21 May 1946.

Buchanan was recommissioned 11 December 1948 at Charleston and underwent shakedown and refresher training with a nucleus Turkish crew aboard. On 29 March 1949 she got underway for Golcuk, Turkey, where she was turned over to the Turkish Navy 28 April 1949. The destroyer served in the Turkish Navy as Gelibolu (D 346) until retired in 1976. 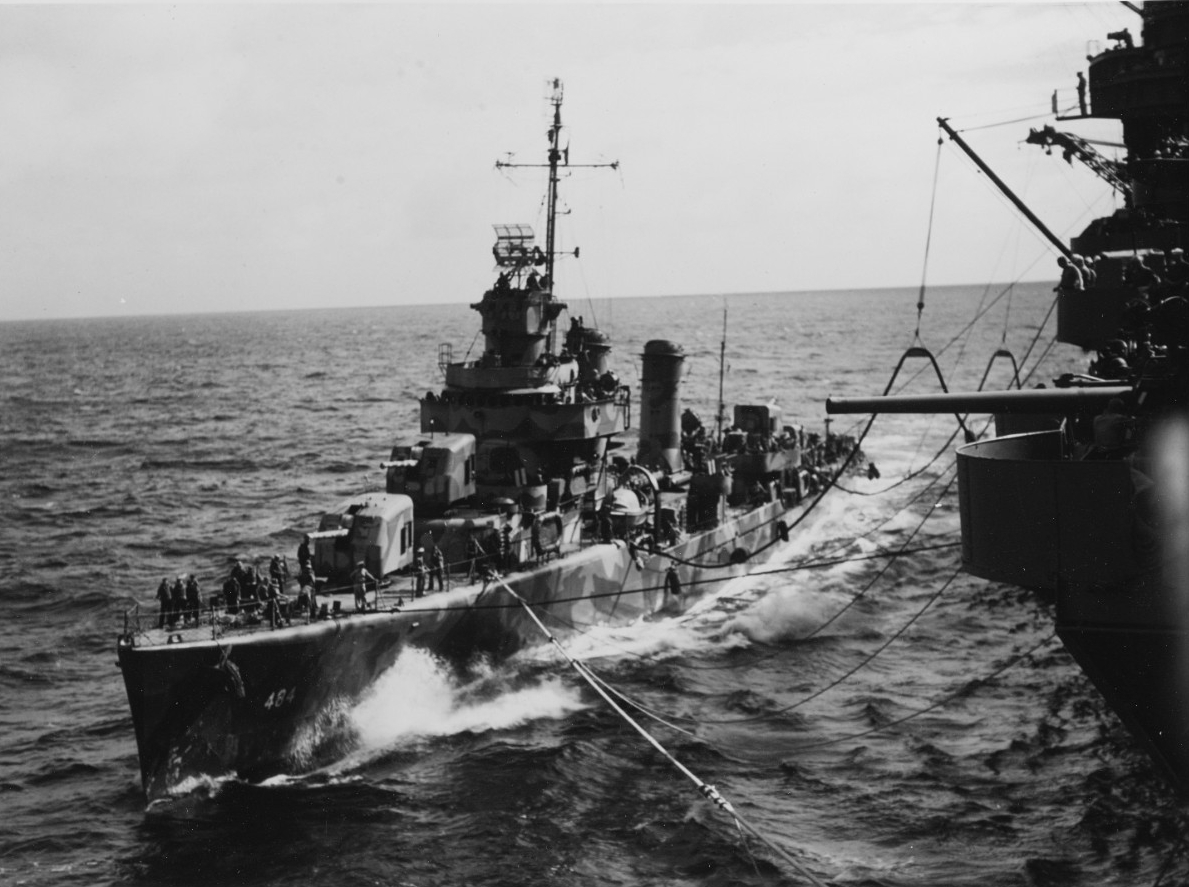