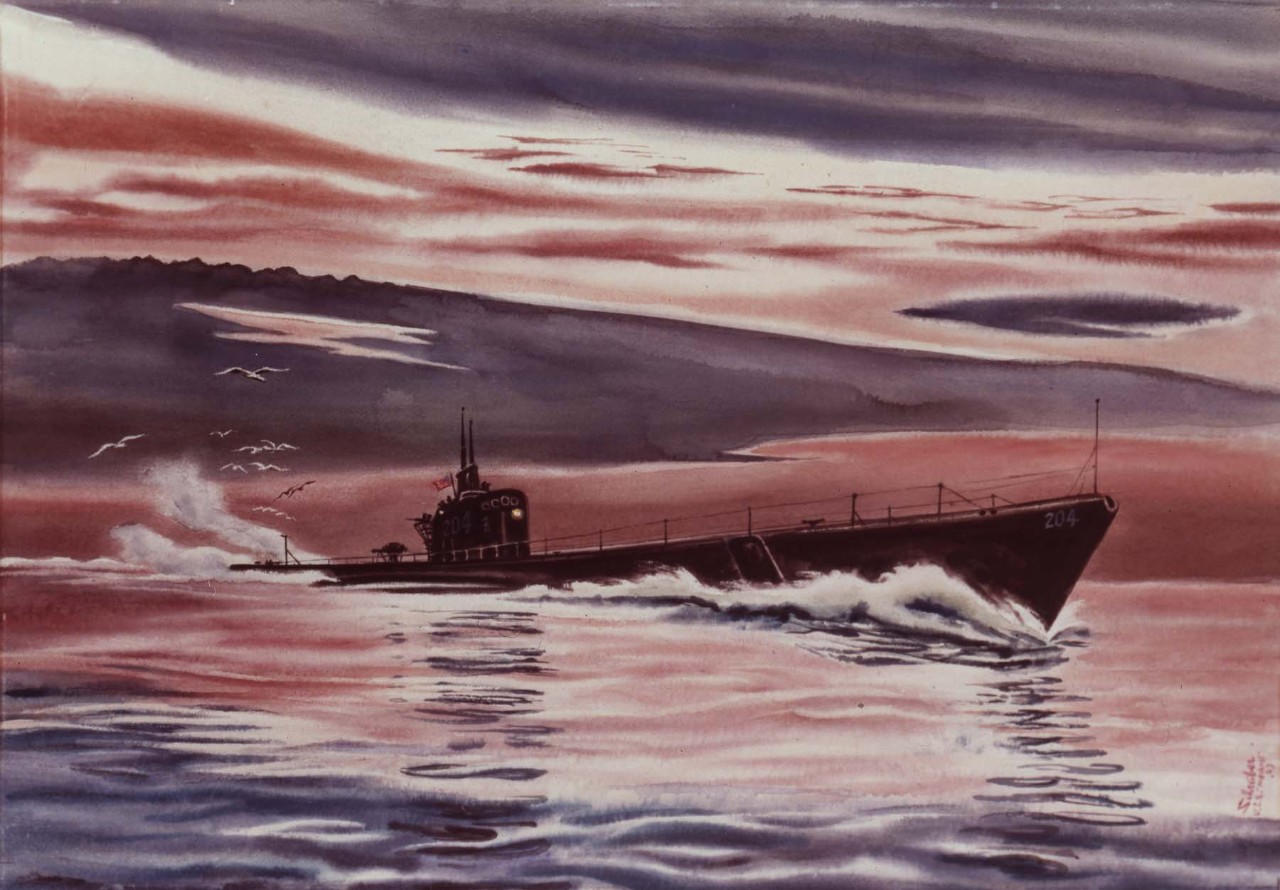 Going Home, watercolor on paper by Georges Schreiber, 1943; accession # 88-159-JN as a gift of Abbott Laboratories.

Following the loss of their base at Cavite, Philippines, in December 1941, U.S. Navy submarines were primarily based at Brisbane and Fremantle, Australia (for operations in the south and southwest Pacific), and Pearl Harbor, Hawaii (north and central Pacific). In mid-1942, available units still ranged from the older and smaller “S-boat” types (distinguished by hull number) to the much larger fleet-type submarines of the Salmon and Gato classes. The fleet boats, used predominantly after 1942, were robustly constructed, had a 10,000-mile cruising range, and carried supplies for 60 days. They were armed with deck guns, machine guns, and up to 28 torpedoes. During 1942, air- and surface-search radars were installed, expanding the submarines’ capabilities and survivability. Unfortunately, grave defects in the depth controls and exploder of the untried Mark XIV torpedoes, already observed in Philippine waters in 1941/42, were not properly addressed until later in the war. Thus, U.S. submarines missed many perfectly aligned targets due to deep-running or dud torpedoes. Despite these initial frustrations, the U.S. Navy submarine force inflicted significant, even crippling, damage on Japan’s over-extended seaborne logistics and lines of communication, ranging from the Aleutians to the eastern reaches of the Indian Ocean, and greatly contributed to ultimate victory in the Pacific. 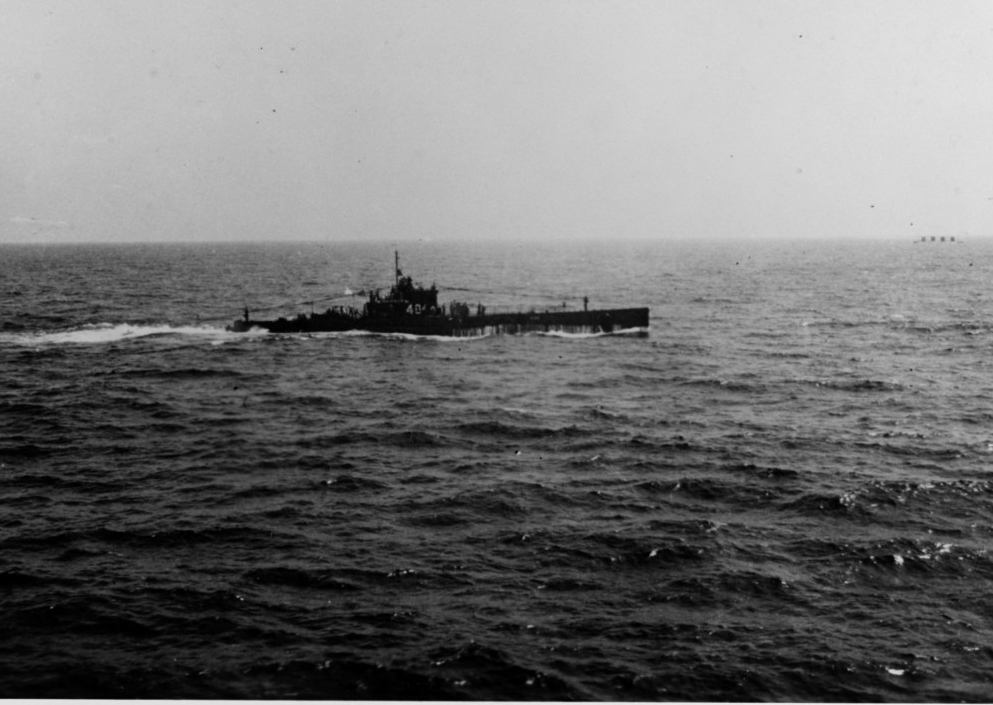 NH 80143. S-40 underway during gunnery exercises in Philippine waters while assigned to the U.S. Asiatic Fleet, circa 1933–1934. A target raft is visible in the right distance. 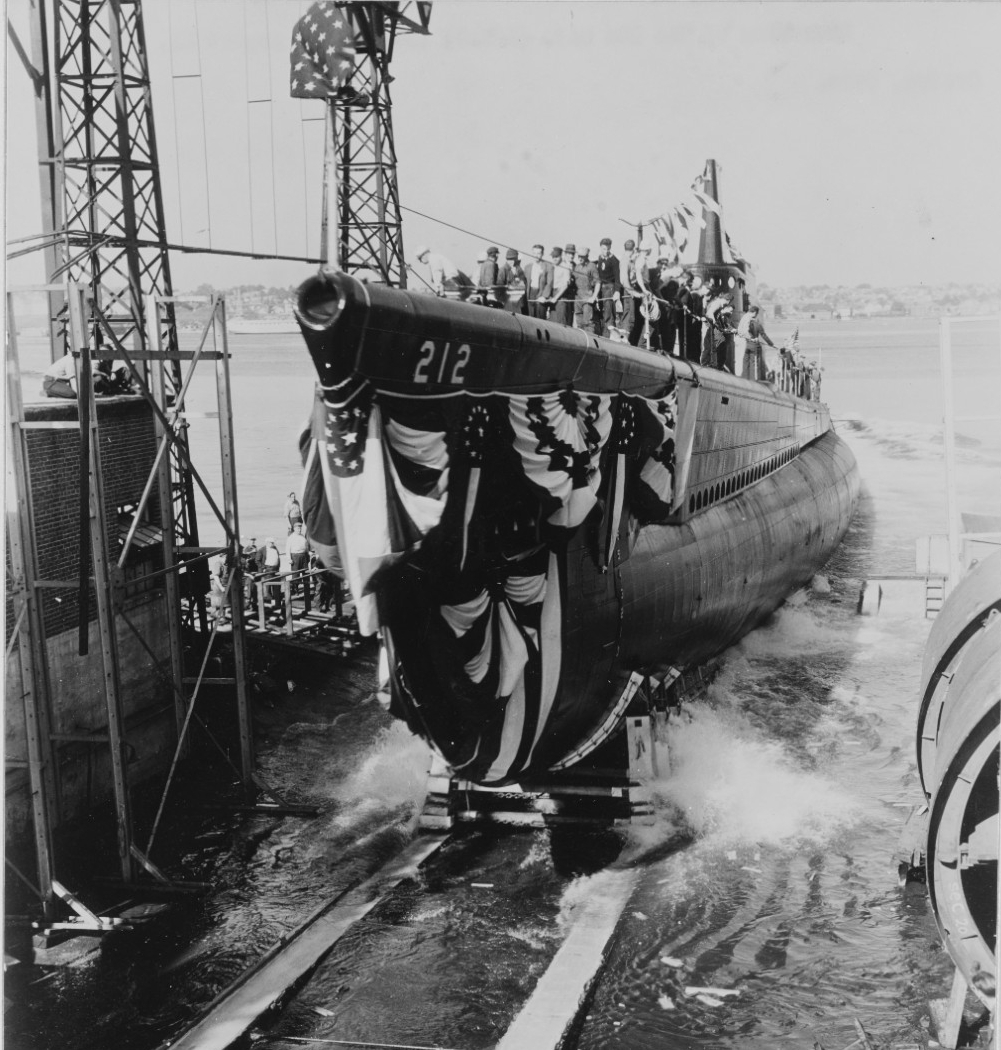 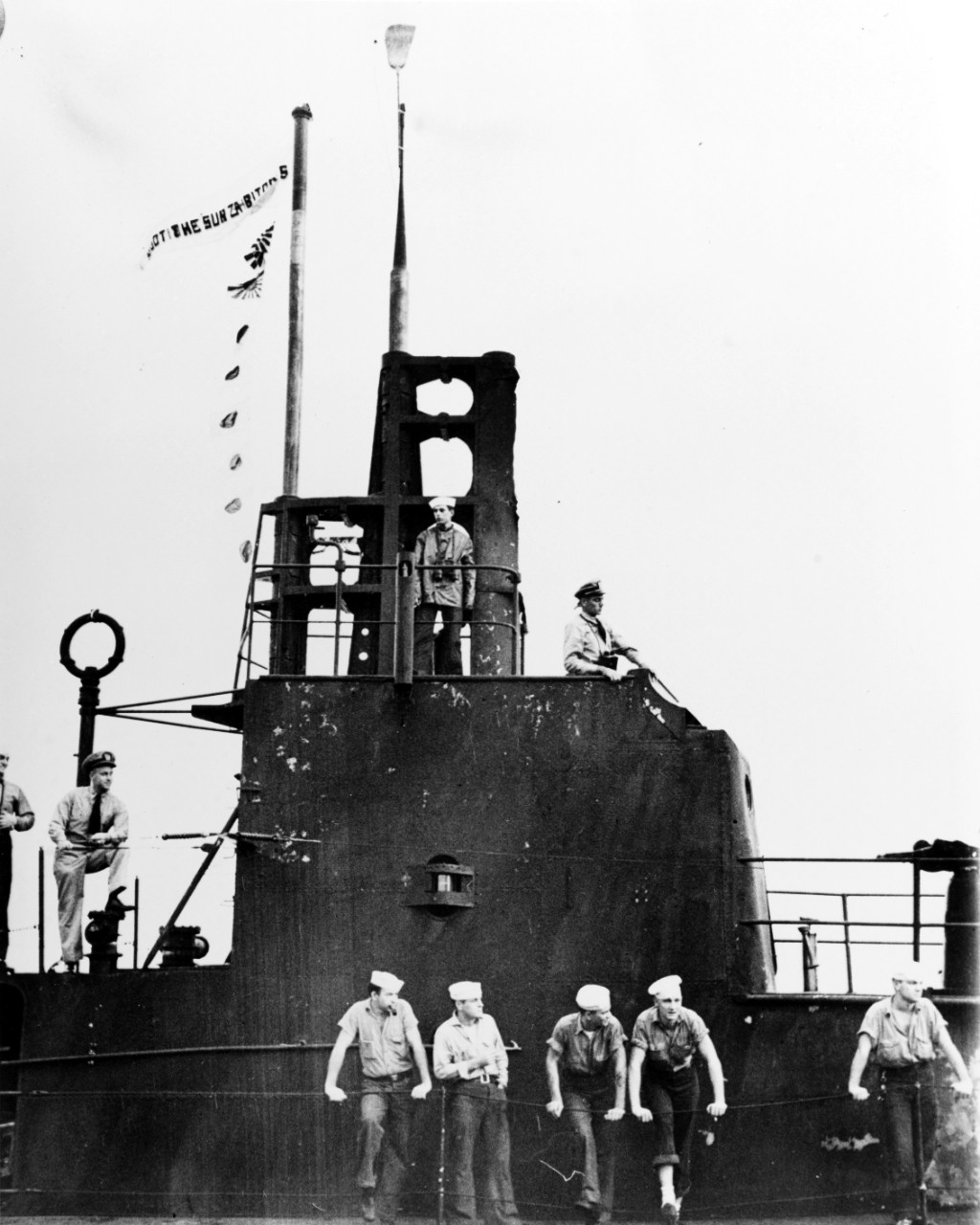 The photo at left (80-G-35726) is of USS Wahoo (SS-238) at Pearl Harbor soon after the end of her third war patrol, circa 7 February 1943. The photo shows her commanding officer, Lieutenant Commander Dudley W. “Mush” Morton, on the open bridge, in right center. The officer standing at left appears to be the executive officer, Lieutenant Richard H. O'Kane. Note the broom lashed to the periscope head, indicating a clean sweep of enemy targets encountered, the pennant bearing the slogan “shoot the sunza bitches,” and eight small flags representing claimed sinkings of two Japanese warships and six merchant vessels. The forward radar mast, mounted in front of the periscope shears, has been censored out of this photograph. Morton was awarded four Navy Crosses; O’Kane was ultimately awarded the Medal of Honor as commanding officer of USS Tang (SS-306). 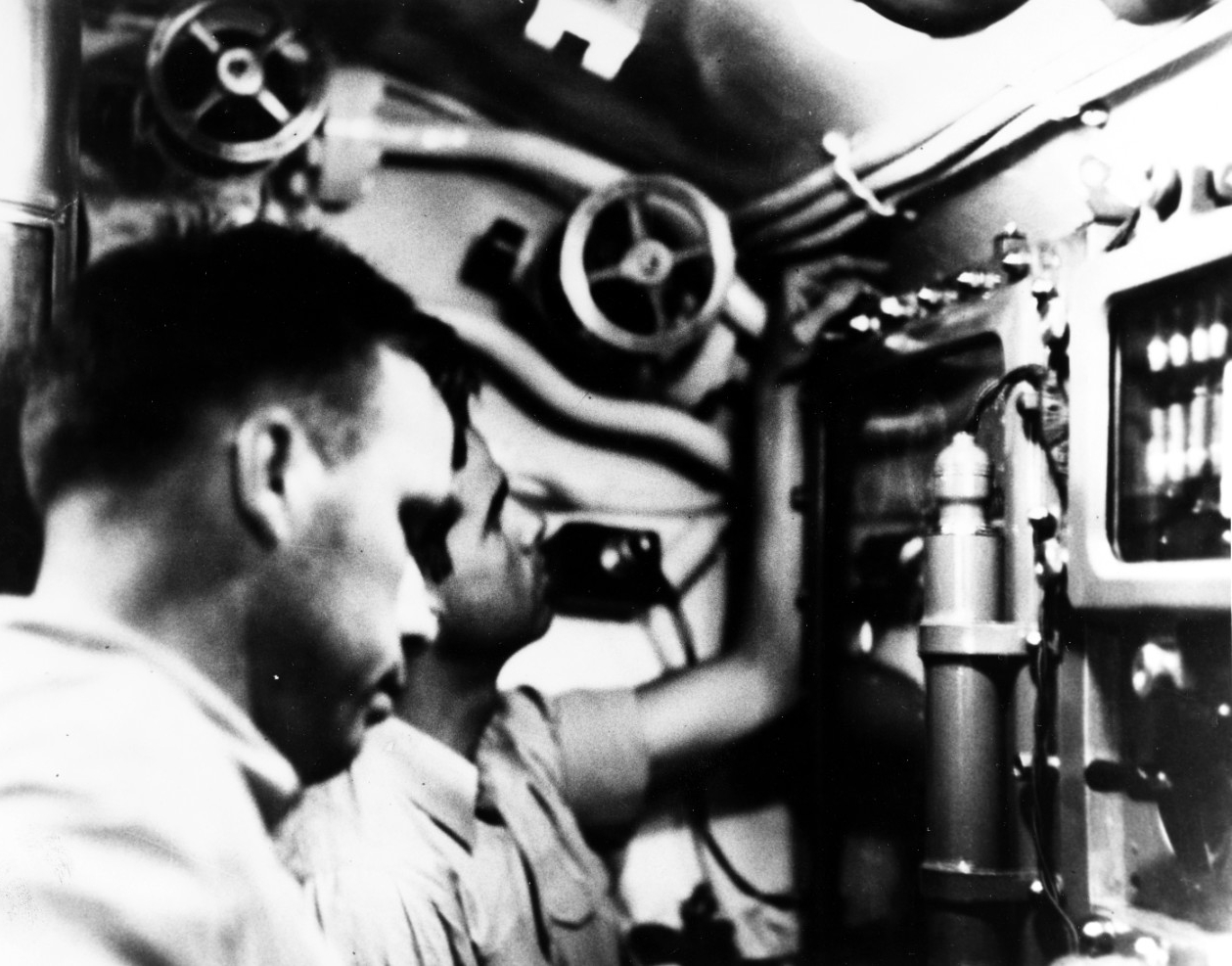 80-G-37033. Morton with another officer (probably O'Kane), in Wahoo's conning tower during her attack on a Japanese convoy north of New Guinea, 26 January 1943. Several ships were sunk in this action. 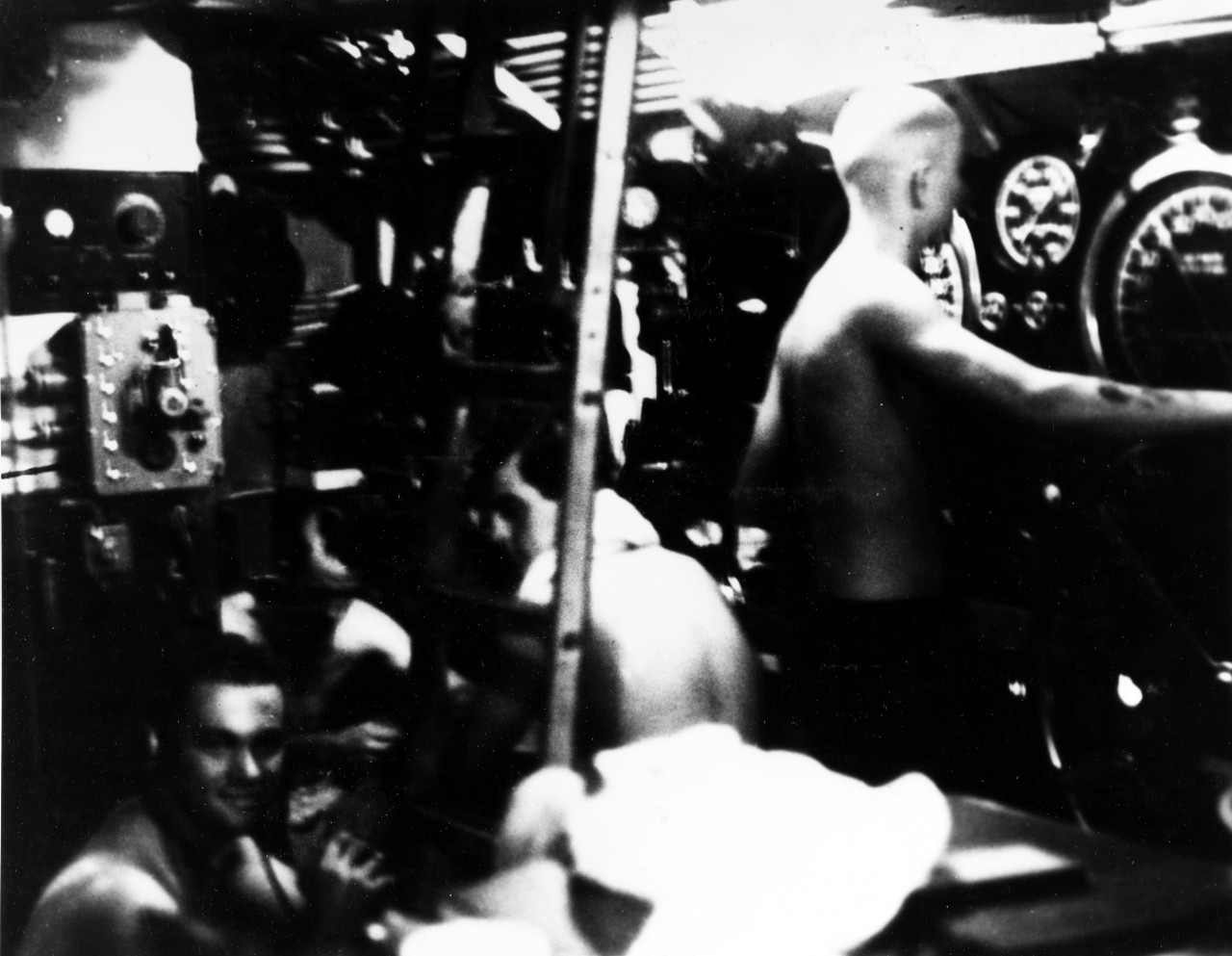 80-G-38602. Scene in the control room during Wahoo's 27 January 1943 action with a Japanese destroyer. When the photo was taken the submarine was at 300 feet, rigged for depth charges. Six charges had just gone off and the crew was awaiting more. 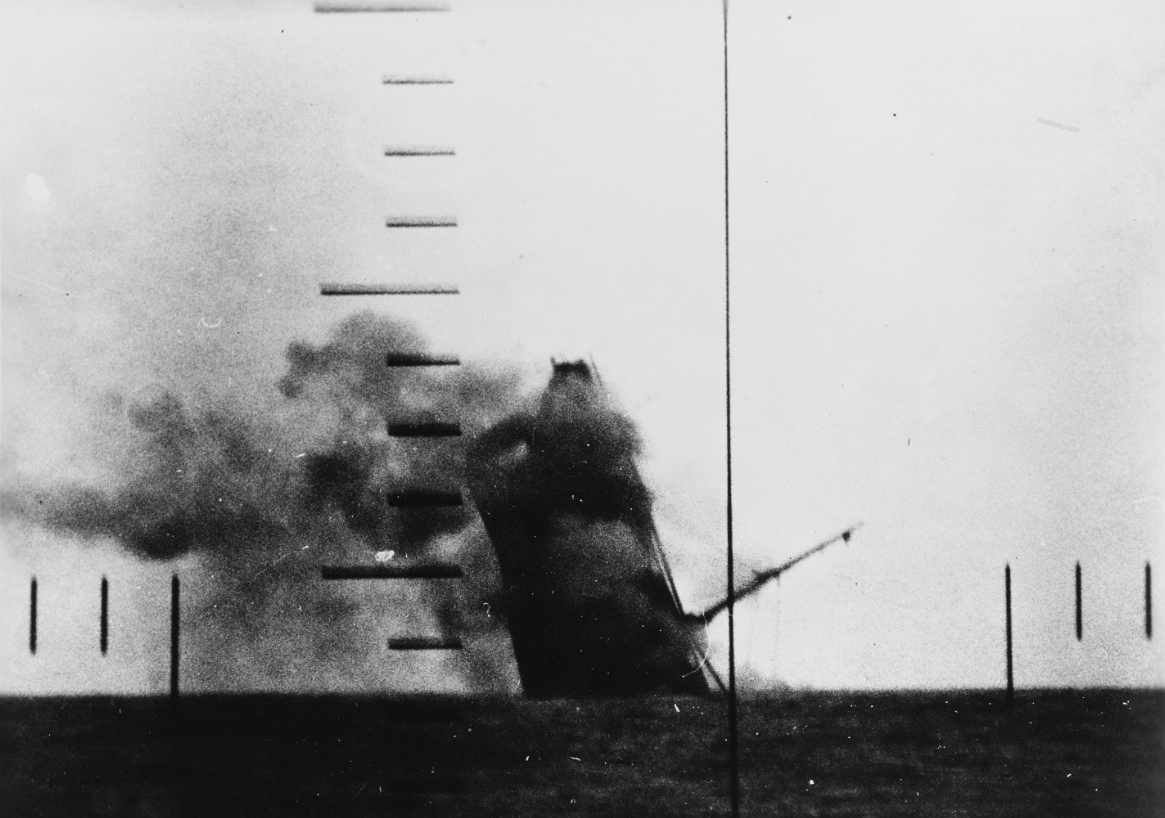 80-G-60948. Japanese cargo ship Nittsu Maru sinking in the Yellow Sea, off China, on 23 March 1943. Periscope photograph, taken from Wahoo, which had torpedoed her. 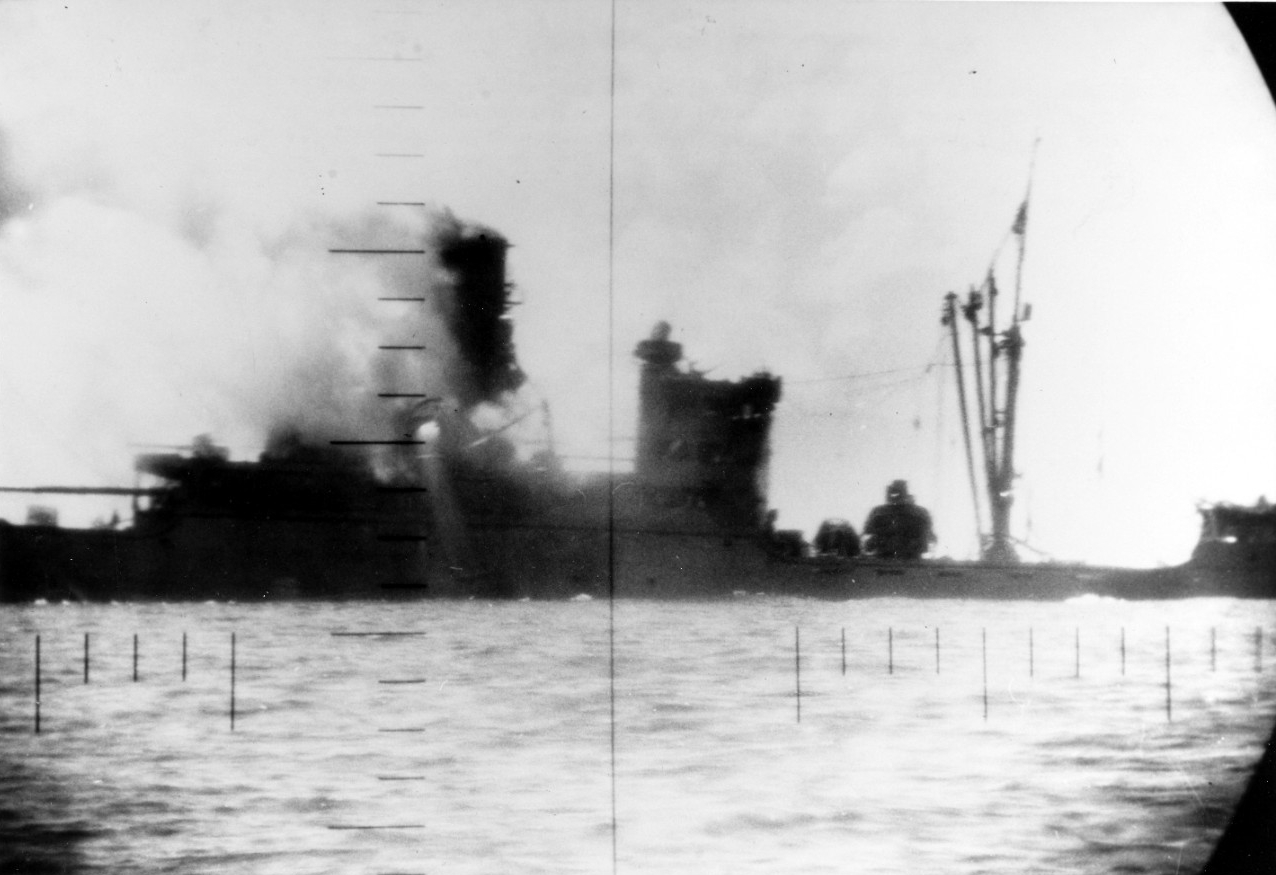 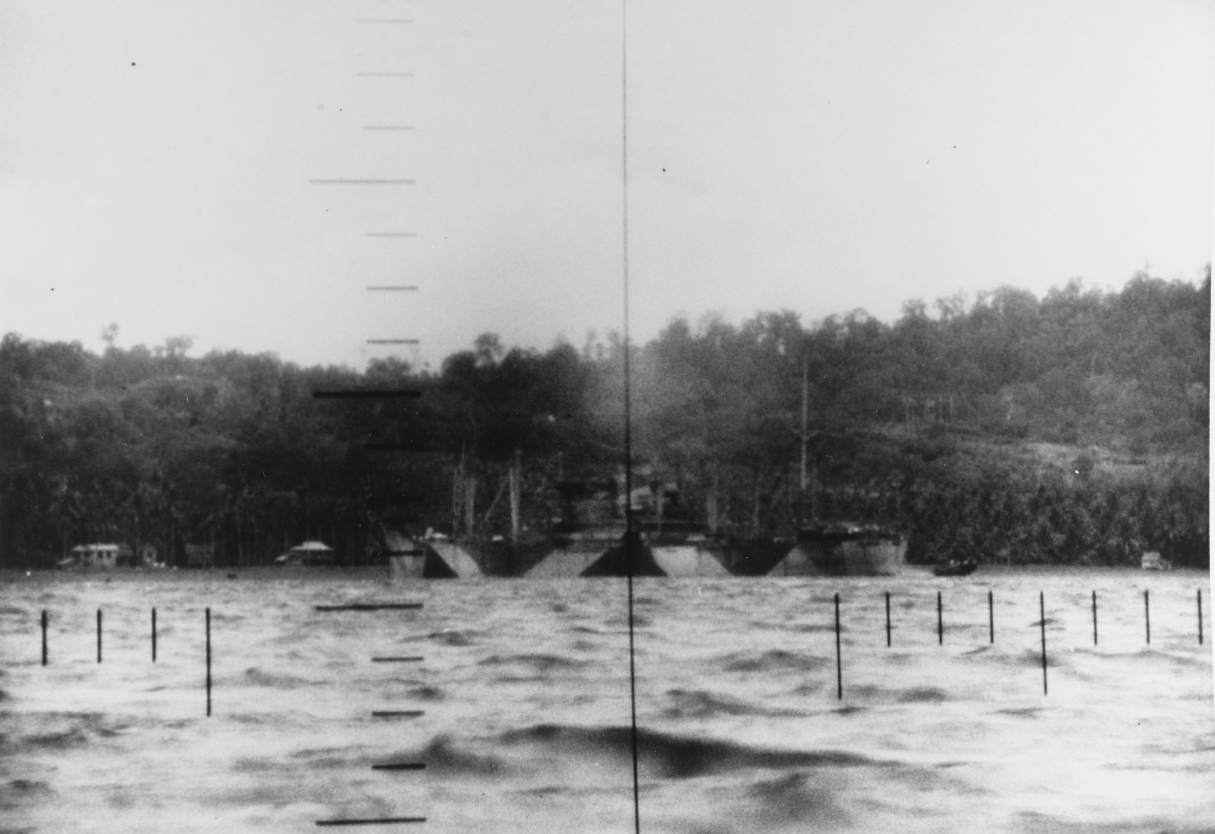 80-G-33190. Sagami Maru, a passenger-cargo ship, as seen from Seawolf on 3 November 1942. Sagami Maru was loading cargo at the small settlement visible ashore, in Davao Gulf, Mindanao, and was sunk on the spot by Seawolf's torpedos. 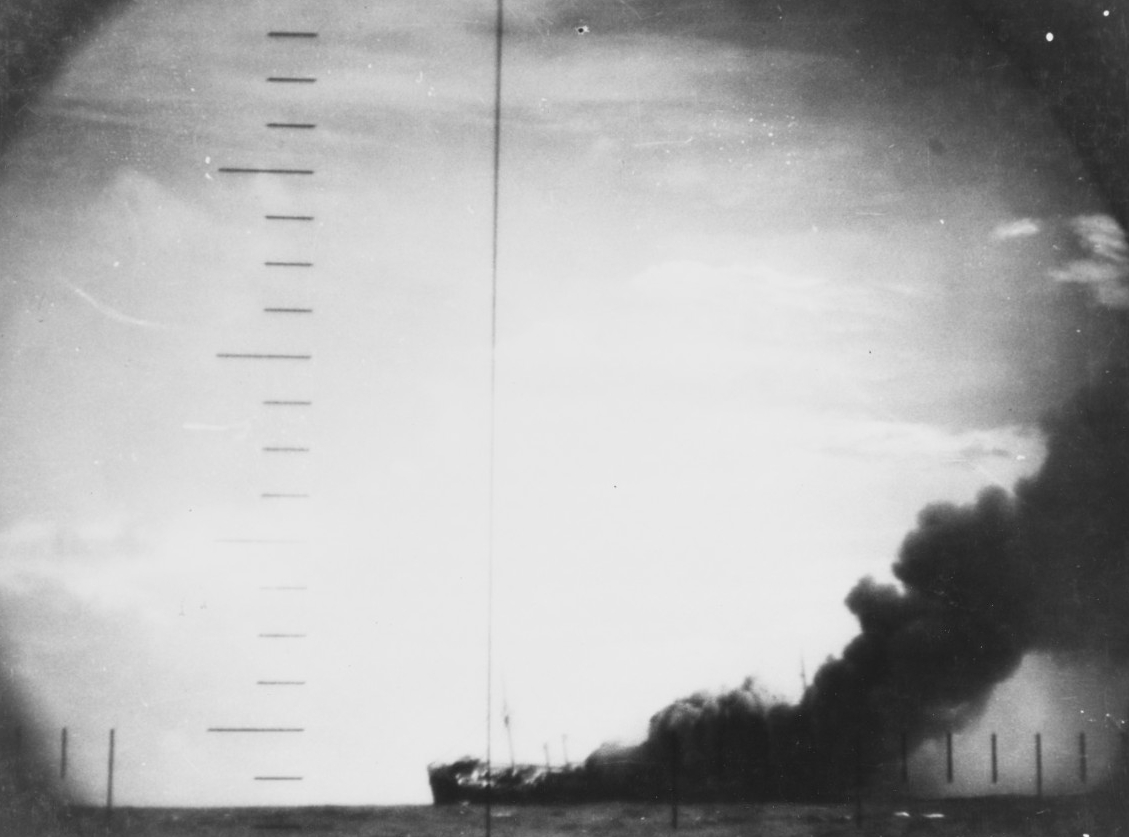 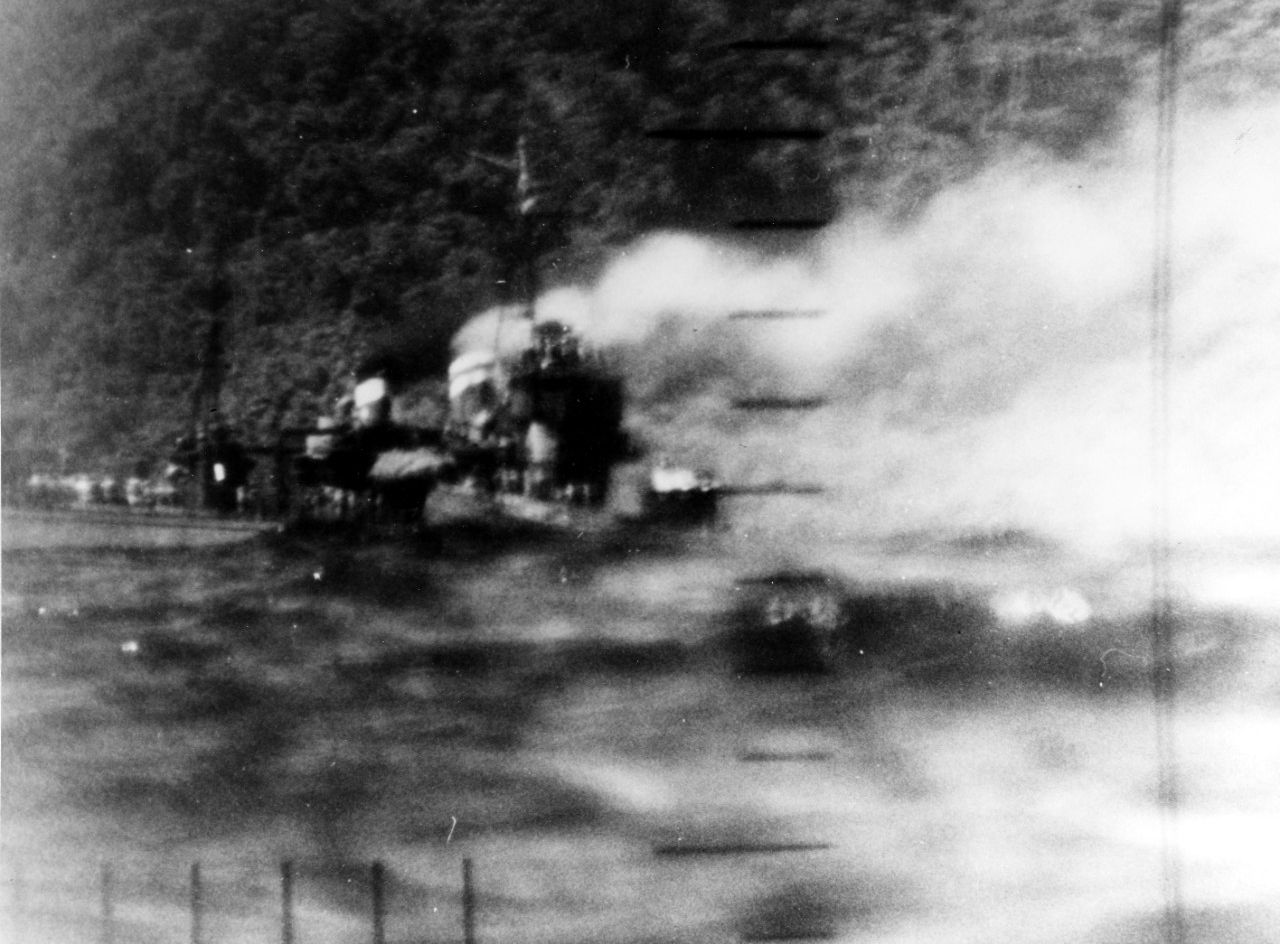 80-G-35738. Japanese destroyer Harusame taken from Wahoo after she had been torpedoed by the submarine near Wewak, New Guinea, on 24 January 1943. Harusame's back is clearly broken, but she was repaired and returned to service despite this heavy damage.

Read about the U.S. Navy's most successful World War II submarine commanders in The Sextant, the NHHC blog.

Highly publicized at the time, the improvised appendectomy carried out by one pharmacist's mate while his boat was running submerged is typical of the leadership abilities and training of wartime U.S. Navy submarine force personnel—even in non-combat situations.

An attack against the Japanese carrier Ryuho by Drum (SS-228) is described here.

The evacuation of American and Filipino civilians from the Japanese-occupied Philippines by Angler (SS-240) is covered here. Peruse a summary of similar operations in the Navy Library Online Reading Room.

Documents digitized in the Navy Library Online Reading Room provide details of the 52 U.S. Navy submarines lost during World War II as well as the extent of Japanese naval and merchant ship losses.

Naval art commemorating the “Silent Service” can be found in this online gallery.