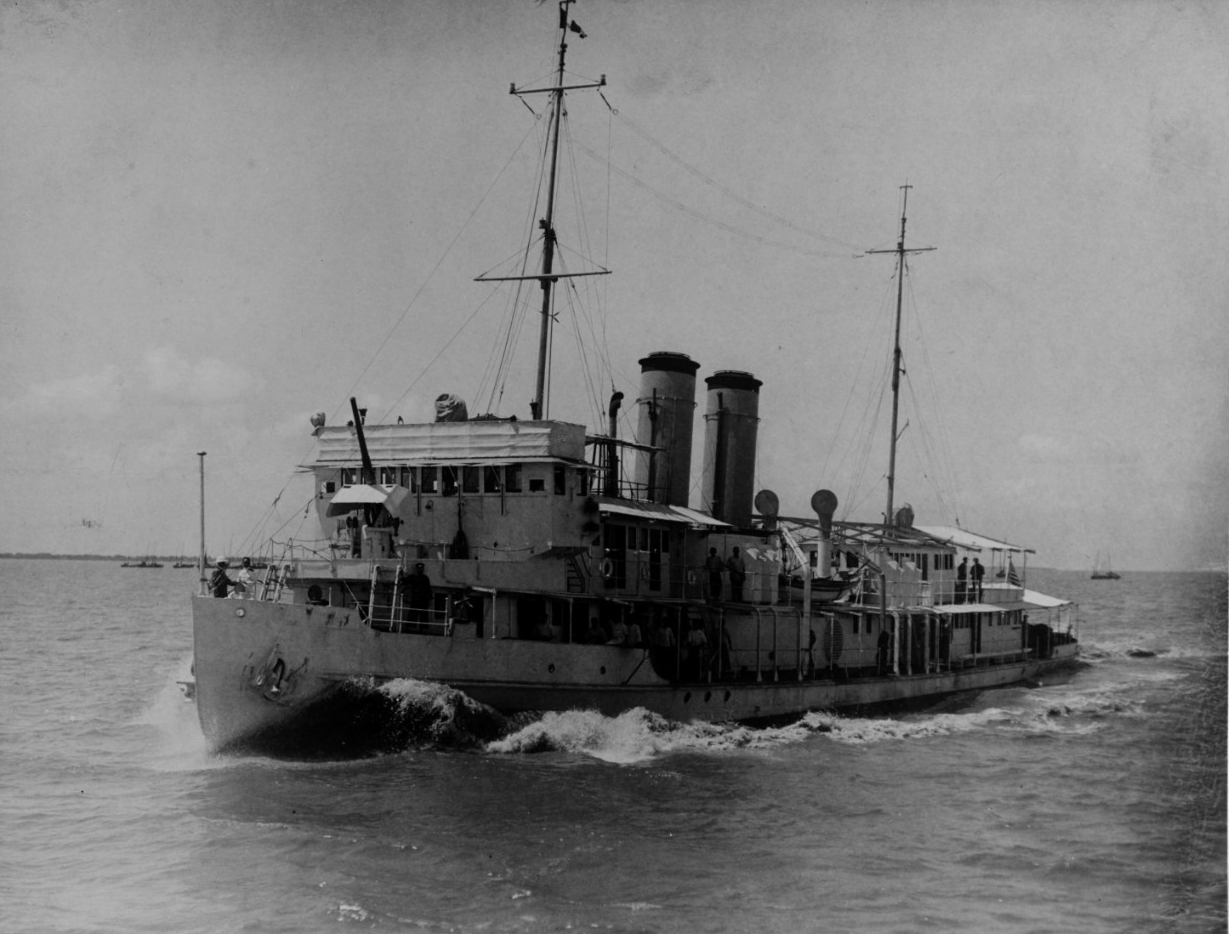 On 11 December 1937, USS Panay (PR-5), a gunboat specifically constructed for duty with the Yangtze Patrol, was operating as a station ship at Nanking, China. She was clearly identified by large American flags painted on her superstructure. As Japanese forces assaulted Nanking, Panay took on board four Americans from the U.S. embassy, as well as a small group of American and foreign nationals evacuated from the city. Panay then moved upriver.

On 12 December, Panay was traveling in a convoy with three American Standard Oil vessels, Meiping, Meian, and Meihsia, when the Japanese army ordered operationally subordinate Japanese naval aircraft to attack “any and all ships” in the Yangtze River above Nanking. The Japanese navy requested verification of the order, which it received at 1327 that day.

Shortly after 1330, three Japanese bombers released bombs onto Panay and Meiping. Panay’s forward 3-inch gun was destroyed, the pilot house wrecked, radio equipment and fireroom disabled. Leaks developed in the hull and the commanding officer and a number of crewmembers and others onboard Panay were injured.

Within minutes of the first wave of bombers, another squadron of single-engine biplanes launched a second attack, dropping a total of 20 bombs.

Panay’s crew fought back, opening fire on the aircraft with her .30-caliber machine guns, but was unable to bring down any planes.

Due to the extensive damage to the ship, the number of wounded, and length of time needed to get them ashore, the captain gave the order to abandon ship. 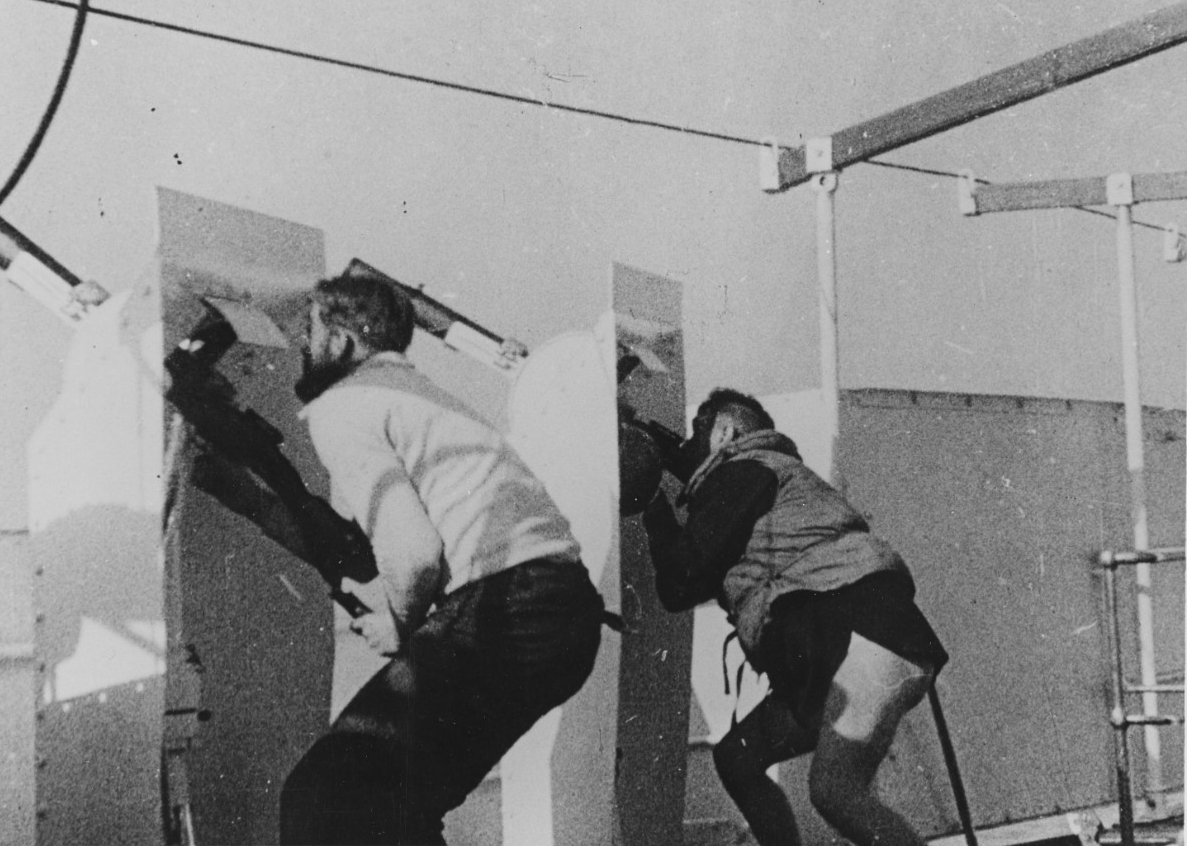 Panay crewmembers, one of them missing his trousers, firing at Japanese aircraft (NH 50815)

The survivors were divided into two groups. The first group included eight enlisted sailors from Panay who were on board Meiping for a Nanking Navy Club event when the Japanese bombed her. Joining the eight sailors were three civilians from Meiping and Meihsia. The second group consisted of those who had been on Panay during the attack.

The enlisted sailors aboard Meiping were separated from the Panay crew since the Japanese had focused most of their attack on Panay. Although Meiping had been hit and caught fire after the Japanese dropped the first load of bombs, the sailors aboard were able to extinguish the fire. While the Japanese attacked Panay, Meiping got underway and proceeded to the riverbank where she was tied up to Kaiyian wharf. After the attack on the gunboat ceased, the Japanese bombed Meiping again, causing another fire. The sailors tried to extinguish it, but were unsuccessful. The Meiping group then went ashore at the wharf. Two of the civilians and one sailor wandered away from the others and were picked up by friendly Japanese and taken by Japanese aircraft to Shanghai. The remaining seven sailors were picked up by the HMS Bee. Later, they were transferred to another U.S. Navy gunboat, USS Oahu (PR-6).

The group of survivors from Panay escaped in two small boats, at times being strafed by Japanese machine gun fire. They spent two nights on the shore trying to evade further attack and were eventually picked up by British ships and treated for their injuries. The ships departed Hohsien on 15 December for Shanghai under convoy of the Japanese navy.

In total, three men were killed, and 43 sailors and five civilian passengers wounded. 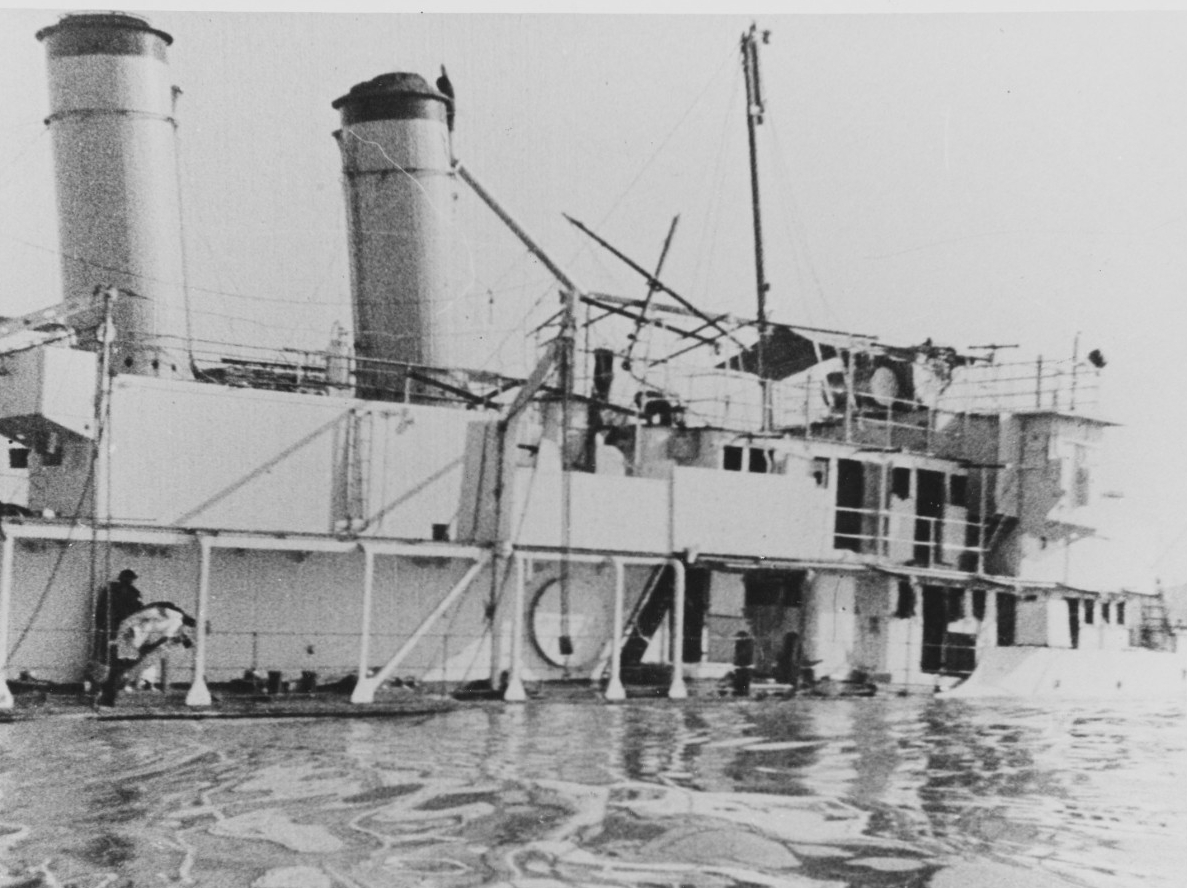 View of Panay with her main deck awash, as she sinks into the Yangtze River between Nanking and Wuhu, China, after being bombed by Japanese planes on 12 December 1937. Note tangled wreckage of foremast and seaman on deck, to left (NH 50807).

The American ambassador immediately lodged a formal protest with the Japanese government. Japan accepted responsibility and apologized, but claimed the attack was a mistake, blaming it on poor field communications and bad visibility.

In April 1938, Japan’s foreign office presented the United States with a check for $2,214,007.36 for property loss, deaths, and personal injuries.

On 17 May 1938, realizing that world events were threatening American interests overseas, President Franklin D. Roosevelt signed the Naval Act of 1938, which appropriated $1 billion for Navy expansion. This resulted in the authorization of 46 combat ships, 26 auxiliary vessels, and 950 naval aircraft.

The China Incident: A Narrative of Events Pertaining to the U.S. Asiatic Fleet During the Sino-Japanese Conflict, compiled from documents/official sources by Captain W. A. Angwin, MC, USN

“’They Were Playing Chicken’: The U.S. Asiatic Fleet’s Gray-Zone Deterrence Campaign Against Japan, 1937–40,” article by Hunter Stires for the Naval War College Review 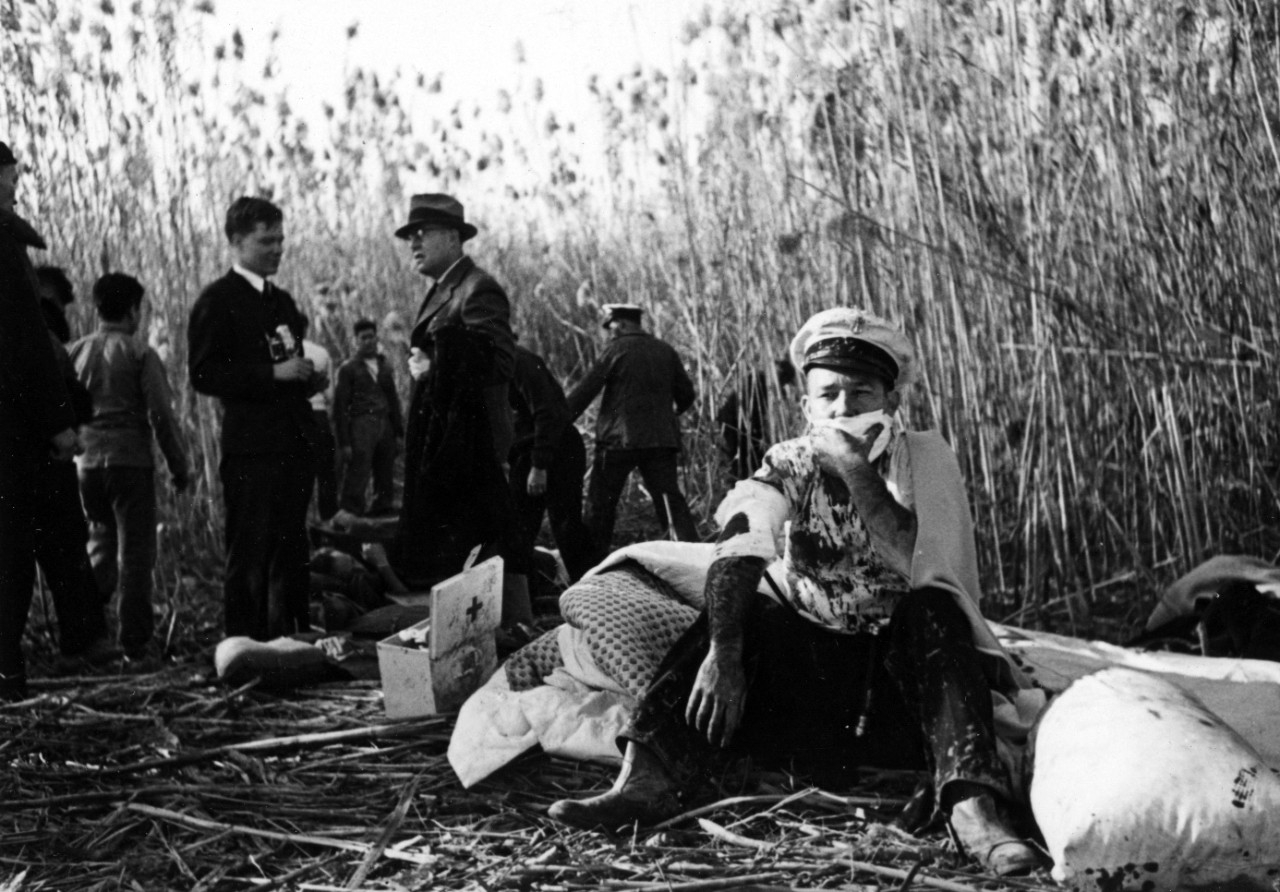 Panay survivors on the Yangtze riverbank. Seated in the foreground is Chief Quartermaster John Lang (UA 462.29).