The U.S. Navy and the Landings at Salerno, Italy 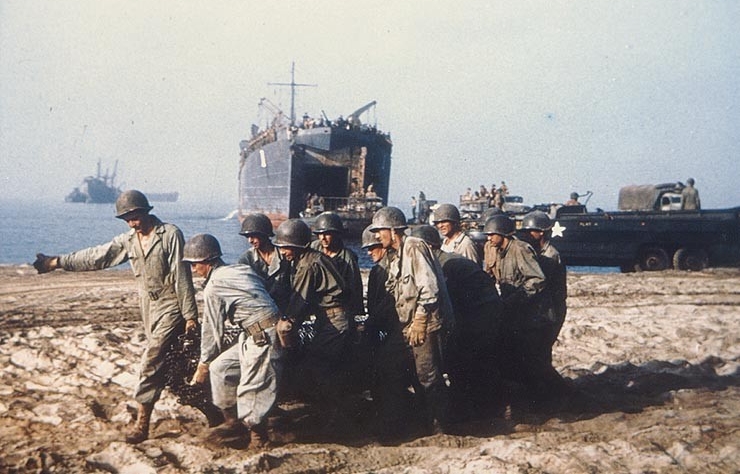 U.S. Army engineers haul a roll of wire mesh into position to make a beach roadway at Salerno, September 1943. USS LST-1 is in the center background (USA C-276).

After victories in North Africa in May 1943, the Allied high command looked to open a second front against the Axis on the European continent. Normandy was the first choice, but British insistence that a cross-channel attack would not be successful until 1944 left the Western Allied leadership looking for alternatives. At the May 1943 Trident Conference in Washington, President Franklin D. Roosevelt and Prime Minister Winston Churchill decided that an invasion of Sicily would be conducted to take pressure off the Eastern Front. Following the success of that attack in July 1943, known as Operation Husky, and the sudden deposition of Mussolini that same month, a separate peace with Italy became possible. Allied military planners decided to invade Italy at Salerno (Operation Avalanche) in addition to two supporting operations at Calabria (Operation Baytown) and Taranto (Operation Slapstick). Invading the Italian mainland would maintain a second front against the Axis and continue to degrade the German military machine ahead of the Normandy attack.1

Salerno was chosen for the main assault due to its excellent sea approaches, lack of shoals, adequate underwater gradients, and relatively soft defenses.2 Critical to the success of the effort was a peace settlement with the new Italian leader, Marshal Pietro Badoglio.3 After months of clandestine negotiations and a tense standoff just before the declaration of surrender, General Dwight Eisenhower announced the Italian capitulation on the evening of 8 September, only hours before the invasion.4

From 5–6 September, nearly 600 units allocated to Hewitt’s Western Naval Task Force departed from Oran, Algiers, Bizerta, Palermo, Termini, and Tripoli. The force was divided into 16 different convoys, all of which sailed toward the Gulf of Salerno.8 The 36th Division convoy (NSF-1) under Admiral Hall and part of TF-81 formed the main American invasion force. It consisted of nine assault transports (APA), four assault cargo ships (AKA), three British LSTs, three British infantry landing ships (LSI[L]), and an escort of three light cruisers, eleven destroyers, eight minesweepers (AM), and one British fighter director ship.9 Admiral Hewitt’s command also included British fleet carrier Unicorn (I-72) and four escort carriers under Rear Admiral Philip Vian, RN, which played a critical role defending ships from aerial attacks after D-Day. While en route to Salerno, the convoys expected harassment from the Luftwaffe, but German air attacks proved much lighter than expected.10 The convoy was attacked periodically from 6–8 September, with the most significant one occurring on the 8th, when German torpedo bombers illuminated the convoys with flares and then launched an attack. Successful use of smoke disrupted the attackers and five or six Ju-88s were shot down.11

Before the invasion could commence, the Navy had to clear mines from the Gulf of Salerno.12 Mine-sweeping the Gulf was vital in securing safer pathways for landing craft and operational areas for naval gunfire support (NGFS) ships. The TG 81.8 Minesweeper Group under Commander A. H. Richards, USN, included 12 auxiliary motor minesweepers (YMS) and only ten small motor minesweepers.13 By the conclusion of the entire operation, British and American minesweepers cleared a total of 275 mines.14 The minesweepers’ mission was too ambitious for their capabilities, however. Troops reported that floating mines hampered efficient approaches to the shore and LST-386 blew up after hitting a mine.15 Additionally, un-swept mines obstructed ships from taking their positions to support the landing as quickly as they had hoped. Despite these complications, Admiral Hewitt commended the minesweepers in his action report, acknowledging flawless execution within their capabilities.16

Intelligence on mined channels, landing points, and Axis defenses came from a variety of sources including interrogations of Italian prisoners, official service publications, aerial and submarine reconnaissance, and captured Italian charts.17 American military planners expected 39,000 German troops and an additional 100,000 by the third day of the invasion (D+3).18 German defenses of Salerno included the 16th Panzer Division, extensive artillery, and anti-tank mines scattered on beaches.19 Using such intelligence, Admiral Hewitt determined 275 targets for preliminary naval bombardment.20 General Clark and 36th Division commander General Fred L. Walker, however, denied the NGFS request. Hoping to catch the enemy by surprise, the generals believed a pre-landing bombardment would be tactically imprudent.21 Admiral Hewitt disagreed adamantly, arguing that there was no possibility for achieving surprise because German aviation assets had detected the force and surmised its intended destination well before the landings.22 Admiral Hewitt was, unfortunately, vindicated when American troops faced a tough landing—German General Heinrich von Vietinghoff, commander of the German Tenth Army, was well aware of the coming attack several days prior and had ample time to reinforce his defenses.23

Despite the lack of preliminary bombardment, naval batteries supported troops on beaches as soon as they moved into their fire-control zones and established communications with shore parties. Rear Admiral Lyal A. Davidson, USN, commanded NGFS in the American sector. His force included the light cruisers Philadelphia (CL-41) and Savannah (CL-42), and four additional destroyers. On D-Day alone, NGFS ships engaged a minimum of 132 targets with 53 percent accuracy.24 In addition to softening Axis defenses during the initial days of battle, NGFS was instrumental in repelling the first major German counterattack on 13 September.25 By 28 September, the equivalent of 71,500 105mm field artillery projectiles had been fired at 556 or more targets.26

The Luftwaffe responded to the power of NGFS by unleashing devastating weapons of their own: new radio-controlled rocket gliders, radio-controlled bombs, and rocket-propelled bombs.27 Three major warships—Savannah, the British light cruiser Uganda (66), and the battleship Warspite (03)—were badly damaged or sunk by these new weapons.28 Savannah was awaiting calls for gunfire support on 11 September when she was struck by a glide-bomb on her No. 3 turret.29 She was barely kept afloat and forced to retire from battle.30 Both Uganda, crippled by a guided bomb on 13 September, and Warspite, struck by two guided bombs on 16 September, retreated to Malta for repairs.31 Fighter cover was the most effective defense against air attacks, but Allied basing of fighter planes in Sicily made continuous cover impossible.32 The situation reached a breaking point when Admiral Hewitt, reeling from the loss of Savannah and lacking any adequate defense against radio-controlled bombs, was compelled to request additional air cover support from Rear Admiral Philip Vian, RN, whose Unicorn-based fighters intercepted and prevented further Luftwaffe attacks.33

After the final German counterattack on September 15th (D-Day + 6), Admiral Hewitt and General Clark had over 150,000 men on the Italian mainland, forcing von Vietinghoff to accept defeat and withdrawal northward.34 Ultimately, approximately 100 allied ships and craft were sunk or damaged during the course of the invasion and the destruction wrought by the Luftwaffe’s aerial bombardment of naval forces had the potential to turn the tide of the battle. American naval losses included Nauset (AT-89), Rowan (DD-405), and Savannah (CL-42).35 The Allied invasion of mainland Italy claimed 3,472 German casualties, 5,259 British casualties, and 1,649 Americans.36 The U.S. Navy suffered 296 killed in action, 551 missing in action, and 422 wounded in the action.37 The Italian campaign that commenced in 1943 would not end until the very conclusion of the European war. Naval gunfire in support of troop operations at Salerno and other amphibious operations on the Italian mainland was so successful that it set a new standard in NGFS not to be surpassed until the Iwo Jima and Okinawa campaigns in the Pacific. Operation Avalanche was a testament to the Navy’s value in littoral operations and provided it with experience in amphibious assaults executed jointly by the Navy and Army for many years to come.

5 The Western Naval Task Force was the name given to the group of warships invading Salerno; the U.S. Fifth Army was the combined Anglo-American force that the task force was landing.