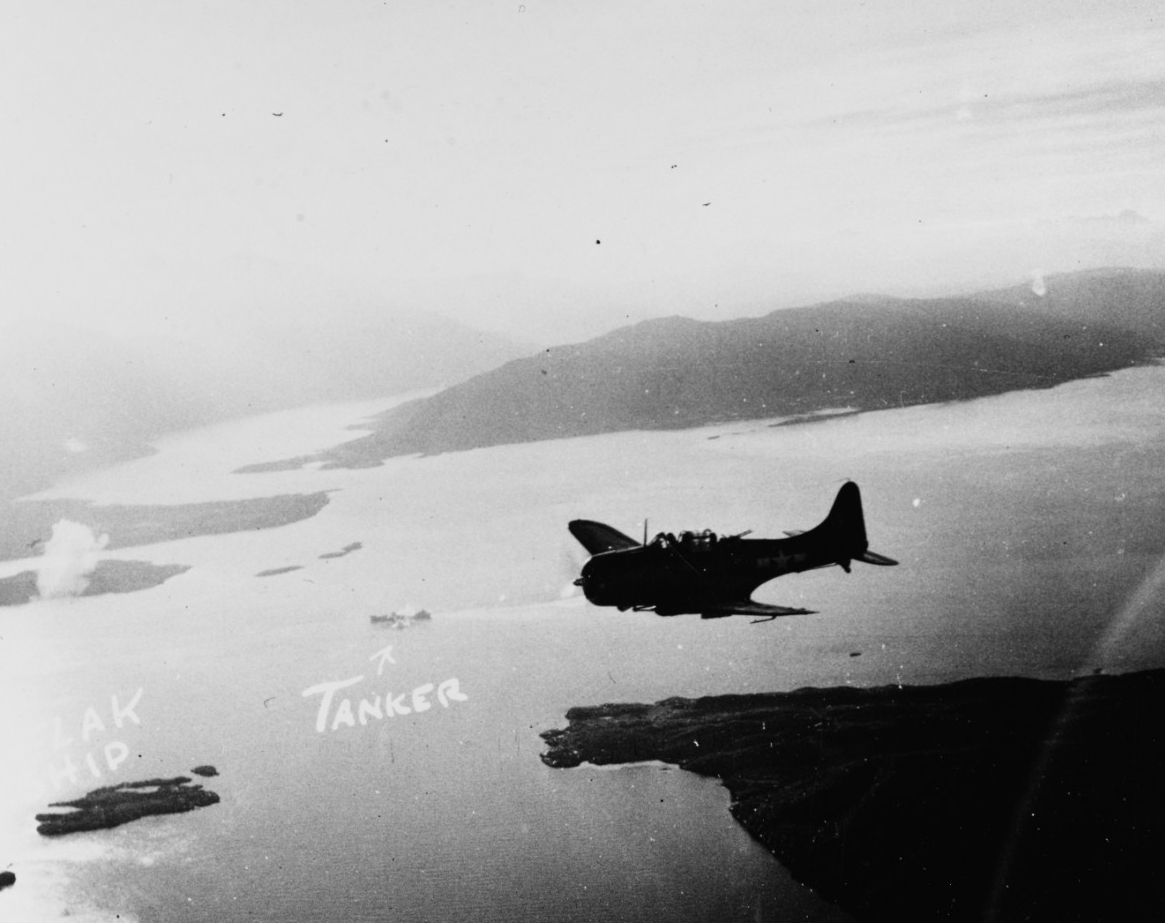 During the early years of World War II, Nazi Germany feared possible Allied incursions into Northern Europe and, in consequence, German forces attacked the neutral nations of Denmark and Norway on 9 April 1940 in an invasion known as Operation Weserübung.1 After being overwhelmed by German forces, Norway’s King Haakon VII, Prime Minister Johan Nygaardsvold, Norway’s pre-war government, and a contingent of military forces escaped to England, where they remained for the duration of the war.2

The German campaign in Norway was conducted in true Blitzkrieg fashion. In fact, within only a few months, the province of Nordland and most of the northern reaches of the country had been occupied. On the evening of 27 May 1940, the Luftwaffe bombed and destroyed most of Bodø, which encompassed an important airstrip and radio station where Allied forces were operating. In addition to some minor Norwegian and British military casualties, 1,500 civilians were killed and nearly 3,500 others lost their homes. After taking control of the area, the Germans established several air fields and Bodø became a vital part of German-controlled shipping in the region.3

In 1943, after a two-year lull in Allied aircraft carrier operations in Norway, the Allies formulated a plan to disrupt German convoys near Bodø. The endeavor was codenamed Operation Leader, the marked objective of which was to reduce shipments of iron ore that were supporting the German military. The information that identified Bodø as a prime target for a potential air raid was ascertained from Norwegian Secret Intelligence Service (SIS) agents, and decoded German radio signals.4 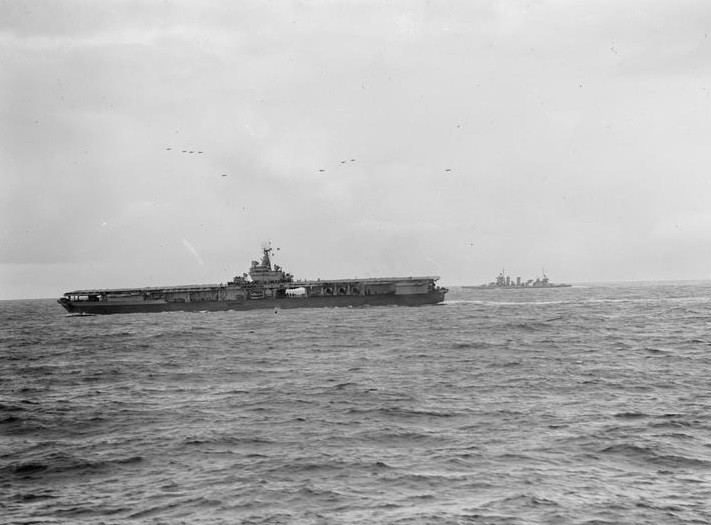 Just after dawn on 4 October 1943, the ships of the combined strike force assumed their attack positions approximately 100 miles off the coast of Norway. The U.S. part of Operation Leader started at approximately 0618, when Ranger launched an air strike consisting 20 Dauntless bombers escorted by eight Wildcats from her position in the vicinity of the Vestfjord sea region. The first wave caught the Germans completely off guard and managed to severely damage and sink several enemy ships. A second wave of ten Avenger torpedo bombers and six Wildcats also succeeded in damaging and sinking several additional German vessels.6

According to the accounts of the German naval staff, the casualties inflicted by the raid were indeed significant—even more so than what was calculated by Allied forces at the time. The 4,991-ton Norwegian steamer Topeka was burned out and the 687-ton steamer Vaagan was sunk. German naval landing craft MFP-231 was beached and the 10,762-ton German tanker Schleswig was badly damaged. The steamer Kerkplein, which had 1,551 prisoners on board when she was hit, also suffered significant damage. The 8,056-ton freighter La Plata, attacked in the first wave, was beached. The German troop transport Skramstad was seriously damaged and later deemed unrepairable; she had 834 soldiers on board when she was hit. The motor vessels Ibis and Malaga were only slightly damaged (the bomb that hit Malaga was a dud). Rabat, a 2,719-ton steamer, was sunk and the 1,536-ton steamer Kaguir was also beached.7 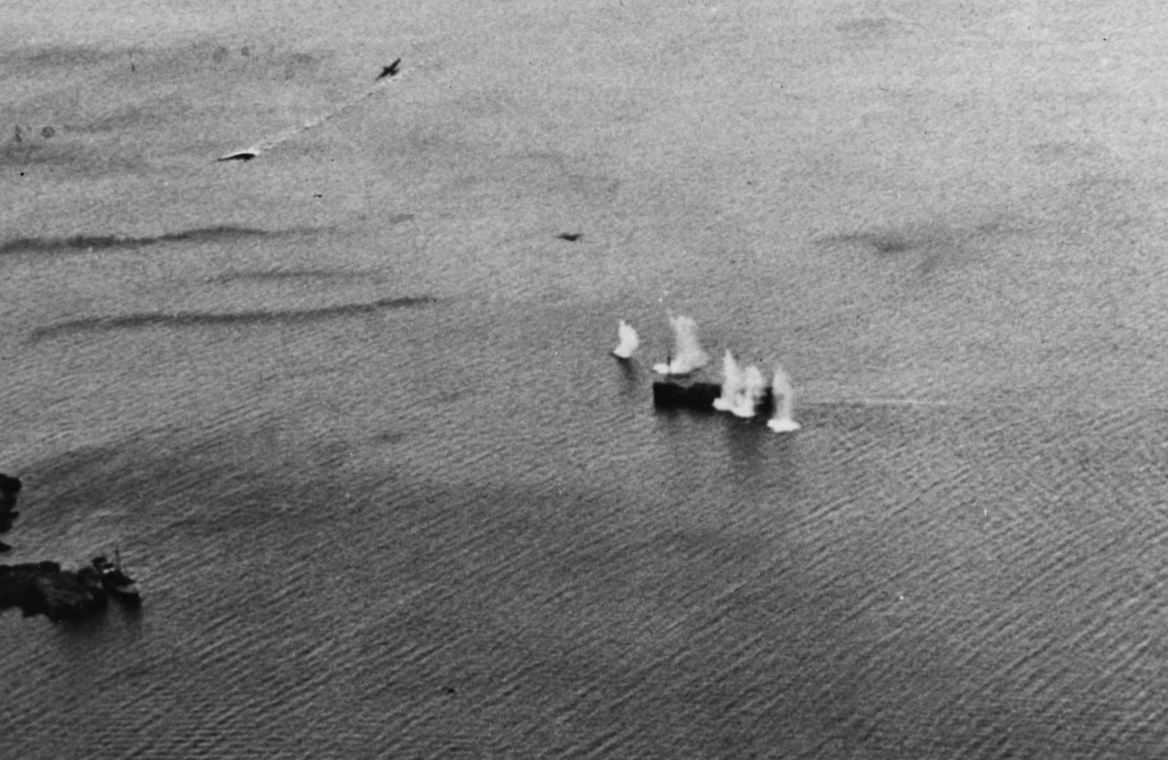 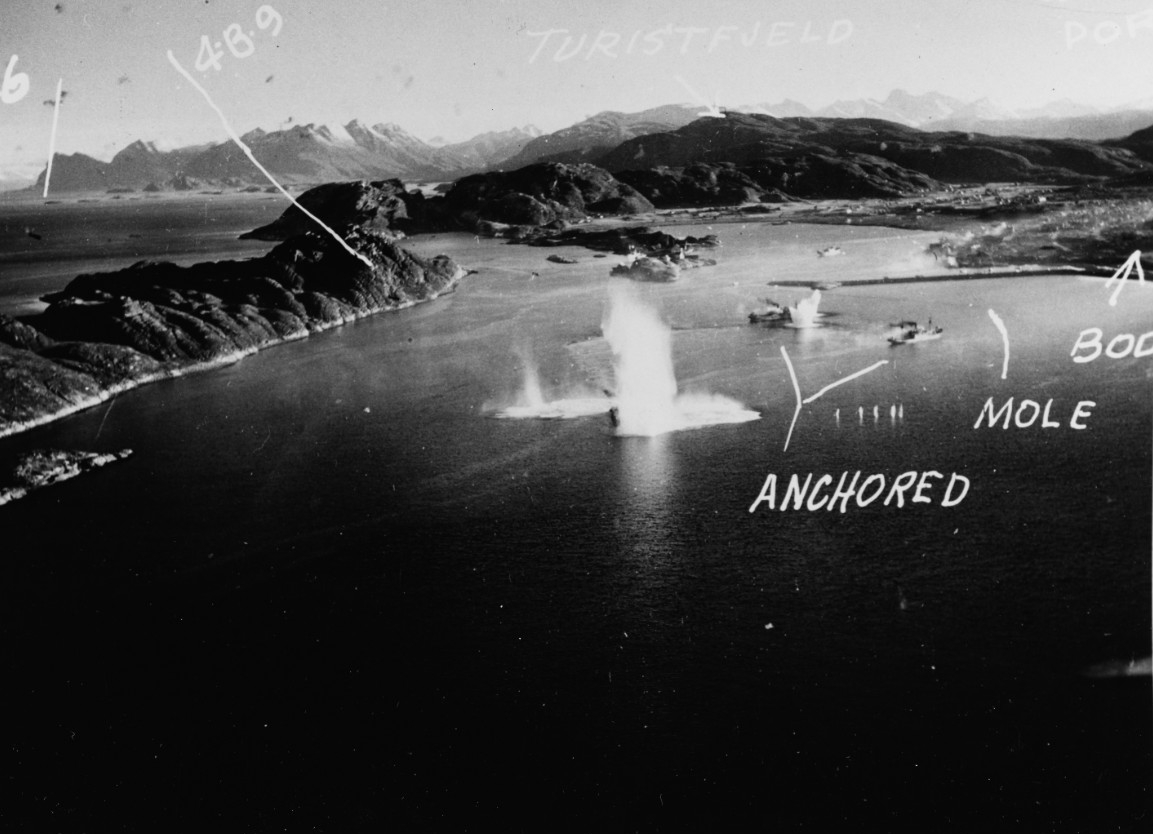 Despite the damage dealt by the Allied strike, the assault did not come without retribution from the Germans. Three of Ranger’s planes were splashed by anti-aircraft fire. From VB-4, Lieutenant Junior Grade Sumner R. Davis and his gunner, Aviation Radioman 2nd Class Donald W. McCarley, were shot down. Davis alone survived and managed to deploy a life raft, although he was later picked up by the Germans. It is believed that Lieutenant Junior Grade Clyde A. Tucker, Jr. and Aviation Radioman 2nd Class Stephen D. Bakren died on impact when their plane crashed into the water. The third aircraft casualty was from VT-4. The pilot, Lieutenant Junior Grade John H. Palmer, managed to parachute out of his plane and, in an incredible display of endurance in the frigid waters, swim to shore. Palmer was eventually taken prisoner by the Germans, and despite suffering significant deprivations at their hands as a prisoner of war, he nonetheless managed to survive to the conflict’s end. Unfortunately, Palmer’s fellow crewmen, Aviation Radio Technician 1st Class Joseph L. Zalom and Aviation Machinist’s Mate 1st Class Reginald H. Miller, did not survive the crash.8

The second act of German retaliation came later in the afternoon, when several German aircraft managed to locate Ranger. A Junkers Ju 88D-1 (side number 4N+EH) from the 1st Staffel (squadron) Fernaufklärungsgruppe 22 (Long-Range Reconnaissance Group 22) was detected 22 miles from Ranger, but was ultimately intercepted and shot down by Wildcats conducting combat air patrol (CAP) for the carrier. Half an hour later, a German Heinkel He 115B (side number K6+MH) from the 1st Staffel of Küstenfliegergruppe 406 (Coastal Patrol Group 406) was sighted 13 miles from Ranger’s location. After a brief dogfight with the carrier’s CAP Wildcats it too was shot down. Neither of the German crews survived.9

Following the attack, Ranger, in company with the British Home Fleet, returned to Scapa Flow, arriving there on 6 October 1943. Ranger’s air group received four commendations for its gallant efforts during the operation and a number of pilots were also recognized individually for their feats. Not the least of such stories was that of Ensign Gerald W. Thomas, an Avenger pilot, whose Air Medal citation concisely conveys the audacious nature of his part in the operation: “Although his plane was struck several times in the engine, he left the enemy beached and badly down by the stern before setting out on a precarious return flight to his carrier with failing power, an oil covered windscreen and a damaged wing.”10 Despite having been directly hit by antiaircraft fire, Thomas flew across 100 miles of icy North Atlantic to return to Ranger, where he made a hard landing on the deck. It was only his 13th overall landing as a pilot.11

The operation deprived the German military industrial complex of badly needed iron ore, and was therefore a strategic success. For the United States, however, the raid represented more than just a successful attack against the Germans. Indeed, as noted by prominent U.S. naval scholar Robert Cressman in his seminal work on Ranger, the event was the “most significant attack on Northern Europe by a U.S. carrier during the war,” and, for that matter, was “the Navy’s only carrier operation above the Arctic Circle during the war.”12  However, this was not all: As Cressman asserts, there was also a very conscious effort on the part of Ranger’s air group to strike only military targets and to avoid or minimize civilian casualties. This effort was important as the Norwegians were paying close attention.13

More than half a century after World War II, the Norwegian people still remember the hope that the Allied attack gave them and do what they can to honor the sacrifices of those who died fighting for their liberation. During a ceremony held to commemorate Operation Leader on 4 October 1987, a Norwegian citizen, Mr. Gunnar Bernstein, gave the following speech:

Those of us in Fagervika who witnessed the battle that raged more or less on our doorstep for a short, hectic hour that forenoon, 44 years ago, looked    upon the presence of the American aircraft as a reaching out of hands from the other side of the vast ocean—a reaching out of hands from brothers—a gesture, which in itself bore promise of a new dawn, a new future for our beloved Norway.14

Thus, in addition to its strategic significance and the bravery of its combatants, it is important to remember that Operation Leader also provided a small, but nonetheless profound glimmer of hope to a people languishing under the tyranny of an occupying power.