A Ceremony for the Fallen: Aftermath of a Kamikaze Attack 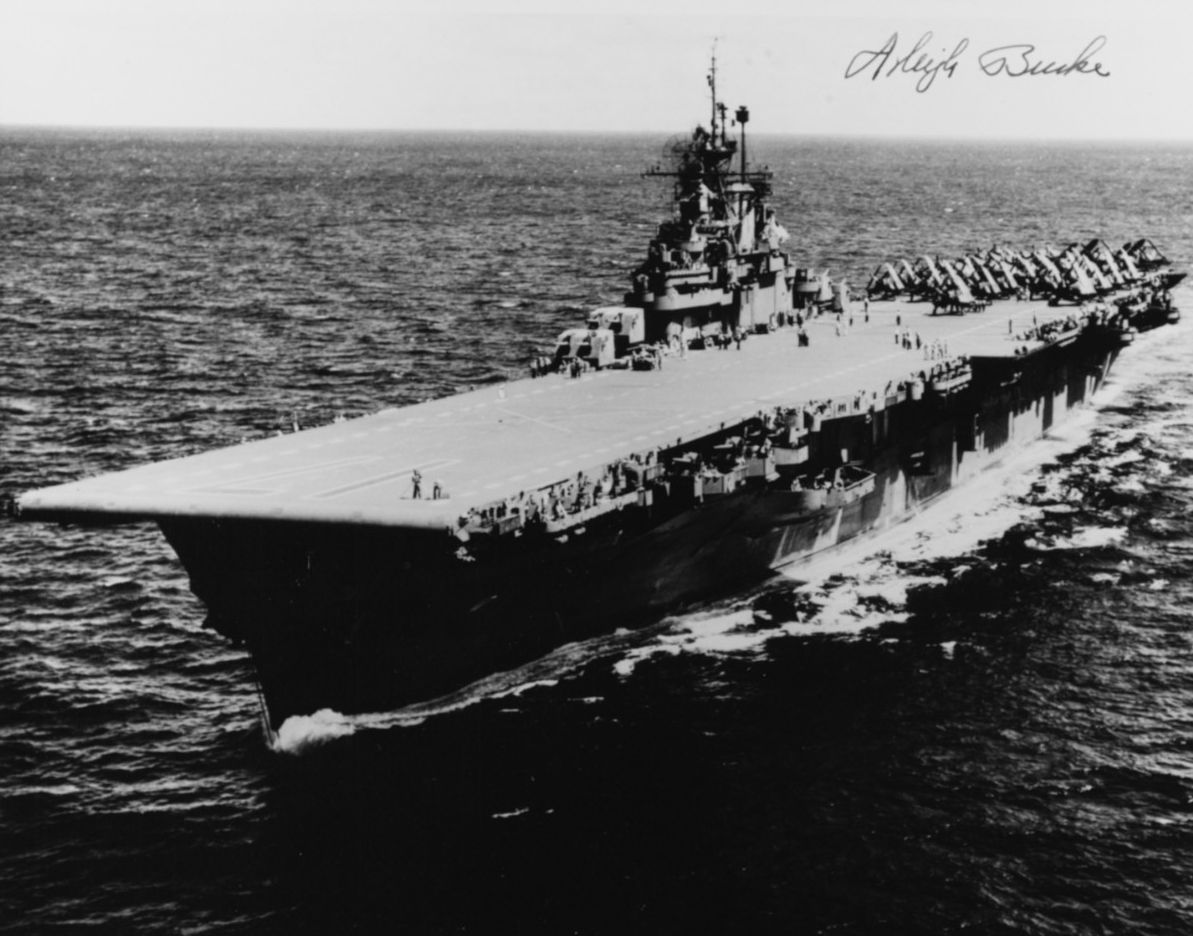 Bunker Hill (CV-17) at sea in 1945. The original photograph is dated 16 October 1945. It has been autographed by Admiral Arleigh A. Burke, who served on board Bunker Hill in January-May 1945, while he was chief of staff to Admiral Marc A. Mitscher, Commander, Task Force 58. Collection of Admiral Arleigh A. Burke, USN. U.S. Naval History and Heritage Command photograph, NH 42373.

Eternal Father, strong to save,
Whose arm hath bound the restless wave,
Who bid'st the mighty ocean deep
Its own appointed limits keep,
O hear us when we cry to thee
For those in peril on the sea!

—Eternal Father, Strong to Save (The Navy Hymn)

A burial at sea is a ceremonial tradition dating back to ancient times when necessity dictated that the remains of deceased Sailors return to the deep. During World War II, several navies, including the U.S. Navy, buried their dead at sea. Often conducted while still on station in combat areas, the ceremonies were generally as brief as possible. On 12 May 1945, the day after two kamikazes struck aircraft carrier Bunker Hill (CV-17) off Okinawa, one of the longest burials at sea in U.S. Navy history commenced. The ceremony was not only a testament to the fallen, but to the survivors, who worked long hours and endured untold horrors in order to lay their fallen brethren to rest.

For 58 consecutive days prior to the kamikaze attack that heavily damaged her, the carrier’s air group had actively struck enemy targets at Iwo Jima, Tokyo, Kure Harbor, and Okinawa. On 11 May, at 1005, while readying her air squadrons for strikes against Okinawa, a Mitsubishi A6M Zero broke through the antiaircraft screen and released a 550-pound bomb above the carrier’s flight deck. Smashing through the deck, where 34 fighters, torpedo bombers, and dive-bombers awaited takeoff, the Zero’s bomb soared out the side of the hangar deck and exploded out over the sea. The suicider then crashed into the fully fueled and loaded aircraft on the flight deck, beginning a chain reaction of exploding munitions and gasoline fires across the aft end of the ship. Friendly destroyers later rescued several Sailors and aircrew blown over the side by the blasts or driven to jump off the ship due to the intense smoke and flames. 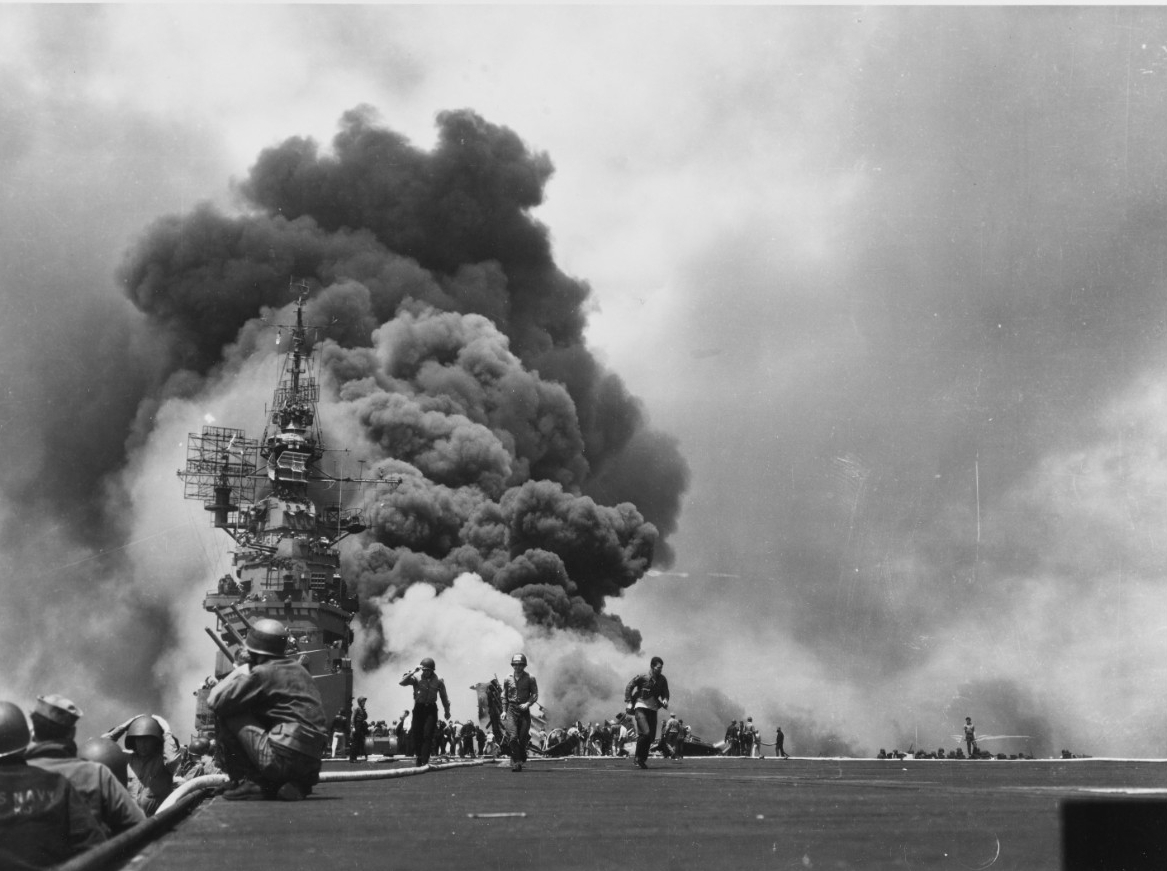 Scene on Bunker Hill's (CV-17) flight deck, looking aft, while her crew was fighting fires caused by kamikaze hits off Okinawa on 11 May 1945. Official U.S. Navy photograph now in the collections of the National Archives, 80-G-323712.

Not thirty seconds later, a second kamikaze hit Bunker Hill’s flight deck with its own 550-pound bomb. The explosion devastated the hangar deck and pilot ready rooms below. The suicider aimed for the carrier’s island structure, crashing nearby and just missing Vice Admiral Marc Mitscher and Commodore Arleigh A. Burke. One of the aircraft’s wings passed through the flag office, killing three officers and 11 enlisted men on Mitscher’s staff. Damage control teams immediately went to work, fighting several fires throughout the ship and attempting valiantly to control flooding below the waterline. Engineers onboard worked tirelessly in hellish conditions, led by the resolute Chief Engineer Lt. Cmdr. Joseph R. Carmichael, Jr. Their efforts prevented an already horrific situation onboard from turning into a catastrophically fatal one, and undoubtedly saved several lives, often by sacrificing their own. Electricians Mate Second Class Norman Lasman remembered Carmichael as “the hero of my life.” Carmichael rescinded an order for those in the aft engineering spaces of Bunker Hill to abandon ship and ordered his men to stay at their stations, speaking to and encouraging several of them as they died of smoke inhalation. Of 21 men in Lasman’s division, only he and two others survived. 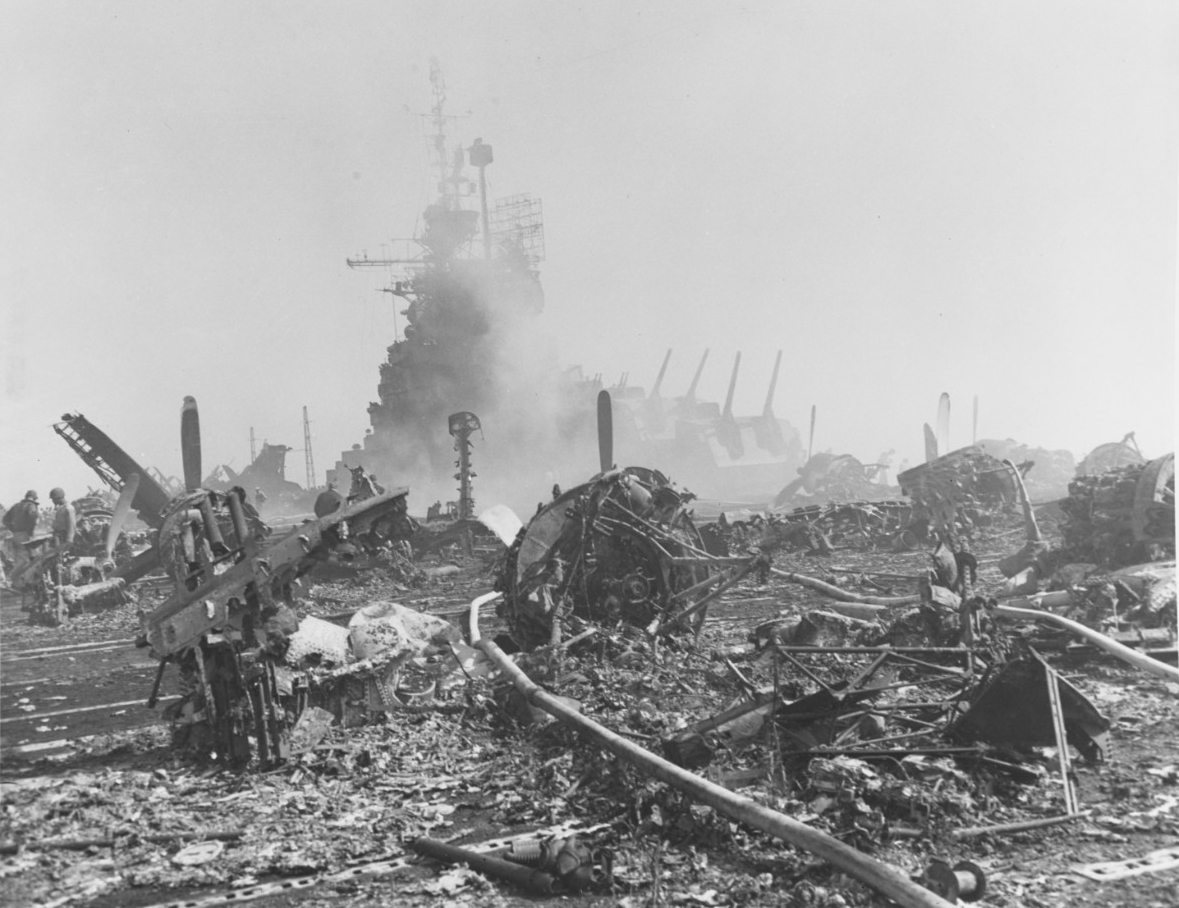 Aircraft wreckage on the flight deck of Bunker Hill (CV-17), after most fires were out following hits by two kamikazes off Okinawa, 11 May 1945. Official U.S. Navy photograph now in the collections of the National Archives, 80-G-259904.

Recovery efforts of the dead onboard Bunker Hill began almost immediately after the fires had all been put out later that afternoon. With most of the dead Sailors remaining in the spaces below decks, it became necessary for the physical removal of the bodies, most found in passageways and damaged compartments. This process, often done in the dark, was both unnerving and dangerous, yet necessary. The recovery teams slowly made their way through smoke and water-filled compartments below decks, often not seeing any bodies of shipmates until physically walking into them. Placed side-by-side at the forward section of the portside hangar deck in neat rows, the identification moved to the flight deck. Lasman, rescued from his smoke-filled engineering space some 19 hours after the kamikaze attack, awoke to find himself lying on the flight deck among his dead shipmates. Still unnerved by the experience decades later, he recalled “the next day we buried almost 400 guys…” 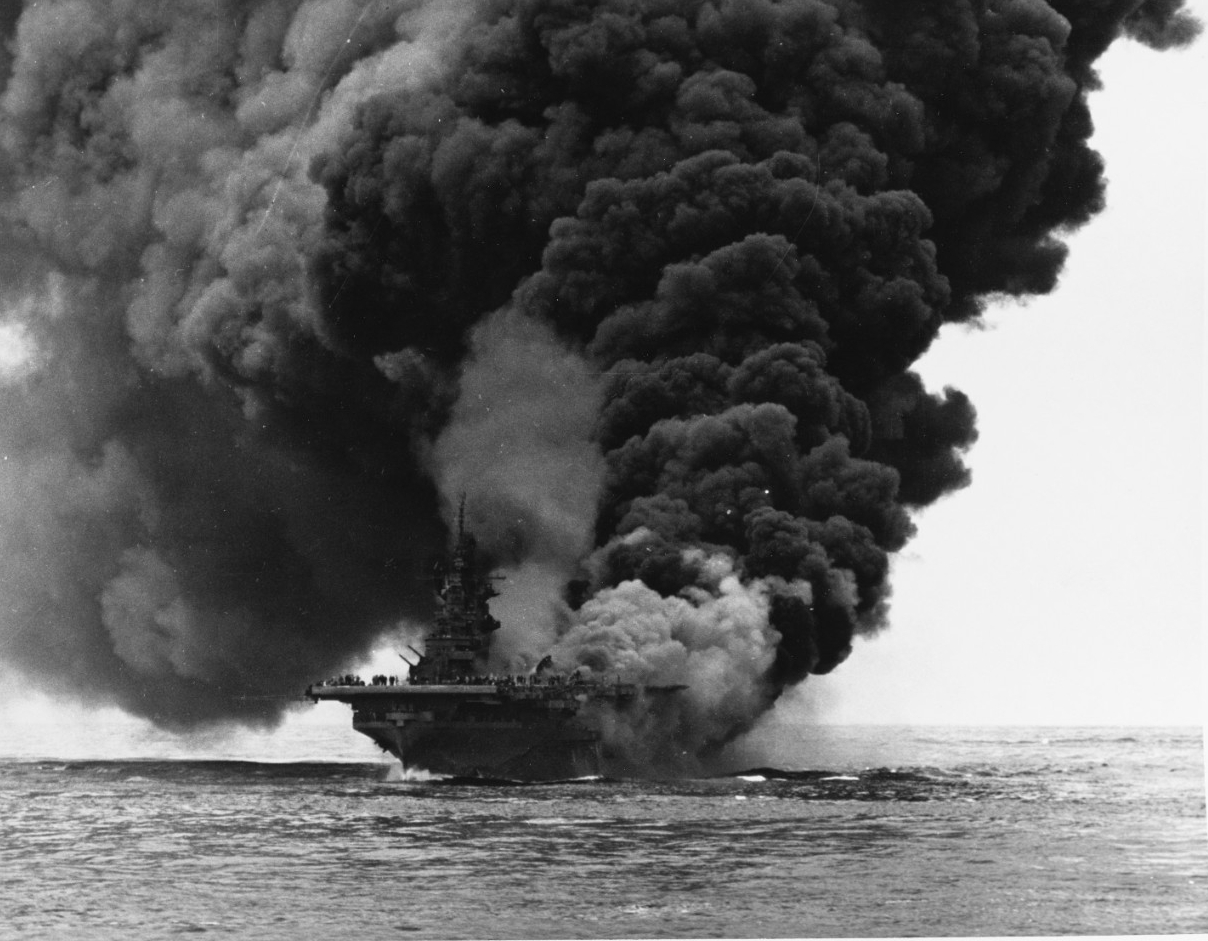 Bunker Hill (CV-17) afire after being hit by two kamikaze suicide planes off Okinawa, 11 May 1945. Photographed from Bataan (CVL-29). Official U.S. Navy photograph now in the collections of the National Archives, 80-G-274266.

Before the burials at sea could commence, the task of identifying the dead began in earnest. Although there were several horrific ways to die on board a warship off Okinawa, one of the most terrifying, yet typical, was by fire. The majority of those killed in action during the kamikaze attacks died from smoke inhalation, asphyxiation caused by intense heat, or fire, and several men were burned almost beyond recognition. According to Bunker Hill’s After Action Report, there were four ways medical personnel identified the deceased. The first involved finding the servicemember’s identification tags (dog tags) or bracelets. Most of the identifications were made in this way, although not all men wore their dog tags, and other means of identification often became necessary. A stenciled last name, usually found on a belt or jacket, became the second method of establishing a man’s identity. The third means of identification involved comparing a corpse’s teeth against dental charts, while the fourth involved inspecting the clothing of the deceased. The last method was not foolproof, however, since “several persons were found who were wearing someone’s else (sic) clothing (in one case clothing from two other people).”

After completion of the identification of a deceased Sailor, the bodies were sewn into burial shrouds of white canvas. Aviation Machinist Mate Third Class Joseph E. Vignati recalled helping sew the canvas shrouds and placing “a 5-inch [shell] with them.” In order to weigh the bodies down and enable them to sink, two 55-pound, 5-inch projectiles, one tied around the chest and the second between the legs, was placed upon each body. Realizing the three burial chutes available onboard were not a sufficient number for the ceremony, crewmembers discovered three undamaged olive drab stretchers for use in the burials, adding these in order to cut down on the length of the ceremony and release six bodies at a time over the side.

The longest burial at sea in U.S. Navy history commenced onboard Bunker Hill on 12 May at three minutes past noon. A rabbi, a Protestant minister, and Catholic priest prayed for the 352 crewmembers (of 393 killed in action) arrayed for burial at sea according to the deceased’s religious preference. In the case of 24 unidentified crewmembers, all three officers said a prayer over the individual. The surviving Bunker Hill crewmembers remained on the flight deck during the nearly eight-hour long ceremony. At various points throughout, several wandered off, often overcome by the emotional tribute to their dead shipmates. After a Marine honor guard fired a 21-gun salute for the fallen and the six burial chutes delivered all of the bodies of the slain to the deep, the somber ceremony finally ended at dusk, at approximately 2000. The physically and emotionally exhausted crew next made ready to get underway to Ulithi Atoll. 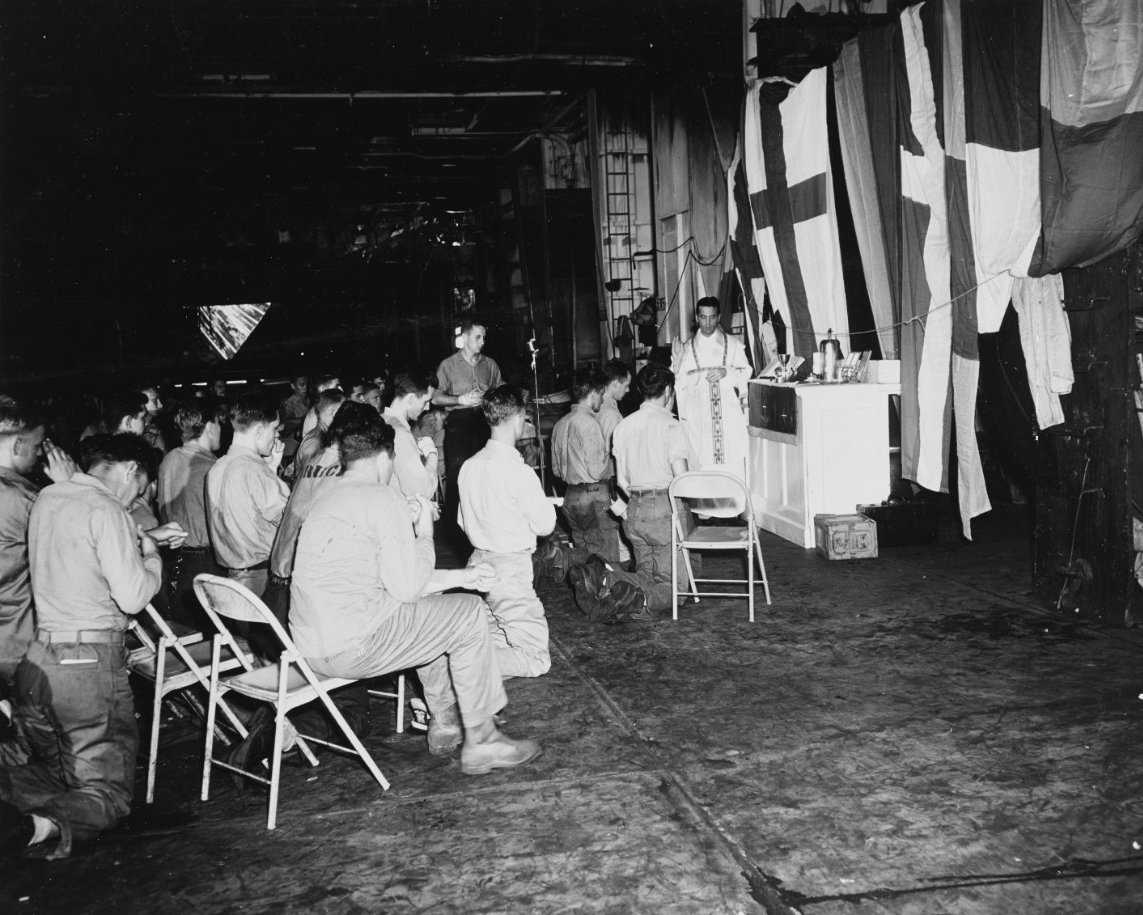 Catholic memorial service on the hangar deck of Bunker Hill (CV-17) in honor of the men killed while saving the ship after she was hit by two suicide planes off Okinawa on 11 May 1945. Photograph taken 20 May 1945. National Archives photograph, 80-G-323704.

After arriving at Ulithi on 14 May, the body of a previously missing crewmember found onboard the ship received a burial on the island. Major Edwin S. Roberts, a Corsair pilot and squadron commander in VMF-221, joined the crew for a memorial service on the 20th. He later noted in his diary, “Afterward we formed on the flight deck for a military salute to those who gave their lives.” Following a brief stopover at Pearl Harbor, Bunker Hill got underway for Puget Sound Navy Yard in Bremerton, Washington, for repairs. The crew, entitled to 30 days of “survivors leave,” returned home to visit family and loved ones.

The war ended a few weeks later, and the carrier served once more during Operation Magic Carpet, bringing American service members home from the Pacific. Although moving on with their lives after the war, many Bunker Hill survivors carried the physical and mental scars of one of the worst kamikaze attacks of the war with them until their dying day. Decades after the end of the war, former Bunker Hill Gunner’s Mate Third Class Bruce Meyers was reading a book about the exploits of the carrier. He vividly recalled receiving orders to help recover the bodies of the deceased the day the kamikazes struck, but in later years attempted to forget the nightmarish things he witnessed. However, after coming across a photograph of dead shipmates in the book, he claims the memories came flooding back. Walking out of his office, he “cried like a baby for an hour. I had stood in that same spot and saw those bodies.” The valiant crew of Bunker Hill, through both their tireless actions in saving the ship and identifying the remains of shipmates for burial at sea, were truly in keeping with the highest order and traditions of the United States Navy.

After Action Report and War Diary:

Kennedy, Maxwell Taylor. Danger’s Hour: The Story of the USS Bunker Hill and the Kamikaze Pilot Who Crippled Her (New York: Simon & Schuster, 2008).