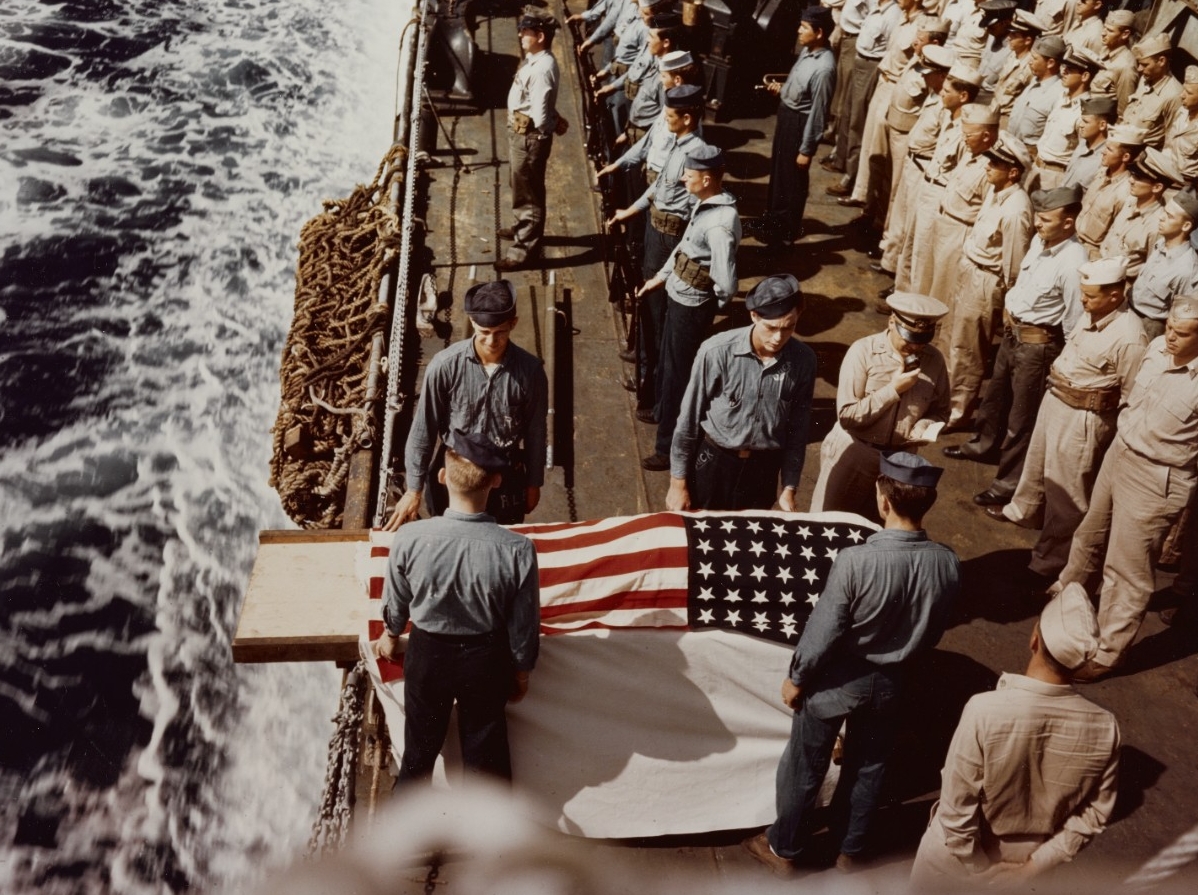 As far as anyone knows, the tradition of burial at sea has been in practice for as long as people have gone to sea. In earlier times, the body was sewn into a weighted shroud, usually sailcloth. The body was then sent over the side, usually with an appropriate religious ceremony. Many burials at sea took place as recently as World War II when naval forces operated at sea for weeks and months at a time. Since World War II, many service members, veterans, and family members have chosen to be buried at sea.

Ceremonial Procedure for At Sea Disposition

Personnel participating or attending the services must wear the Uniform of the Day. When a chaplain of appropriate faith is not available, the service may be read by the commanding officer or an officer designated by him/her. The committal service is as follows:

Officers in the funeral procession and casket bearers may wear the mourning band on the left arm.

Preparation for the At Sea Disposition

Casketed Remains from a Naval Ship

There are both religious and military components of the disposition ceremony. The reading of the Scripture and prayers, the committal, and the benediction constitutes the religious part and may be performed by the chaplain, commanding officer, or an officer designated by him/her. All other aspects of the ceremony are performed by other military personnel.

Six or eight casket bearers (depending on the weight of the casketed remains) form according to height on both sides of the casket. Below decks, while not carrying the casket, casket bearers will uncover. At all other times they remain covered. The casket is always carried feet first.

The selected place for committal is cleared and rigged so that when the casket remains are brought on deck they may be placed securely on a stand, if necessary, with feet overboard at right angles to and extending over the side of the launching.

Attention is sounded on the bugle or passed by word of mouth as the casket bearers, preceded by the chief master-at-arms, execute the Hand Salute as the cortege passes to the place selected for the committal. When the remains have been so placed, the Hand Salute is terminated by those in view and a sentry is posted unless the burial service is to follow immediately.

A chief petty officer is designated to take charge of the firing party of seven persons. The chief master-at arms directs the casket bearers during the service until the flag is encased and delivered to the commanding officer.

Cremains from a Naval Ship

In cases where the remains have been cremated and the urn containing the ashes has been received on board for a sea disposition, the following procedures will govern:

If the urn is to be opened and the remains scattered at the time of committal, a small table or stand should be securely rigged beforehand at the selected place for the committal. The urn will be placed on this table or stand during the reading of the service. The folded flag will be placed on the stand beside the cremains. The executive officer, or another officer appointed by the commanding officer, will assume responsibility for opening the urn and scattering the remains at the appropriate time (keeping in mind the wind factor) during the committal ceremony.

If the urn is not to be opened, a small platform should be constructed and rigged so that during the service, the urn may rest thereon and be launched at the time of committal by tilting up the inboard end of the platform, thus permitting the urn and cremains to slide overboard into the sea.

The cremains received for committal at sea will sometimes be accompanied by floral tributes which may be used to surround the receptacles and cover the platform or table on which it rests during the service. The flowers may be permitted to slide overboard with the cremains or be tossed into the sea by the flag bearer after the urn has been launched or the cremains have been scattered.

For all phases of the funeral where the cremains are carried by hand, one enlisted member will be detailed to carry the receptacle containing the remains.

Four enlisted members will be detailed as flag bearers and will also serve as urn bearers. The flag bearers will follow the bearer of the urn as it is brought on deck and carried to the place of committal. The folded flag will be carried by the leading flag bearer on the right. The flag is then placed on the stand beside the cremains. Immediately prior to scattering the cremains or committal of the urn to the sea, the flag will be picked up and held by the leading flag bearer until completion of Taps, at which time the flag will be presented to the commanding officer.

The Ceremony for At Sea Disposition (Casketed Remains)

When the honor platoon has been assembled in massed formation and has been brought to Parade Rest, the burial service is begun and read through to the end of the prayers. During prayers the assemblage remains covered with bowed heads. After the conclusion of the prayers, the casket bearers should hold the casket and national ensign in place by hand as may be necessary before reading the committal.

When these preparations have been completed and all is in readiness, attention is sounded. The command “Firing party, Present Arms” (Honor platoon Hand Salute) is given and the reading of the committal is commenced. When the indicated word of the committal is read, the casket bearers tilt the board until the casket slides along it, under the national ensign, overboard into the sea. As it goes, the casket bearers retain the board and the national ensign on board and stand fast.

The command, “Firing Party, Order Arms, Parade Rest,” is given and all hands bow their heads. The benediction is pronounced; then follow the commands, "Firing party, Attention. Fire three volleys" (Honor platoon Hand Salutes and remain so until the last note of Taps), "Ready, aim, fire; aim, fire; aim, fire". After the last volley, the firing party remains at the ready position, pieces locked, until the conclusion of Taps, and salutes.

Upon completion of Taps, the firing party is brought to Order Arms. The casket bearers encase the national ensign by folding twice along the long axis of the flag. The blue field is kept to the outside. Beginning at the fly end (away from the blue field), the flag is folded with only the blue field showing. It is then presented by the chief master-at-arms to the commanding officer.

Honoring our Shipmates: The Heritage of the Military Funeral and Burial at Sea

Navy Military Funerals (NAVPERS 15555C). Washington D.C.: U.S. Government Printing Office, 1993. [Includes descriptions of services for committal of persons of the Protestant, Catholic, Jewish, Eastern Orthodox, Muslim, and Buddhist faiths. The above information on ceremonial procedures for at sea disposition was taken from the pamphlet]

United States Navy Regulations. Washington: Department of the Navy. [see Chapter 12, "Deaths and Funerals." This does not include a detailed description of the ceremony.] 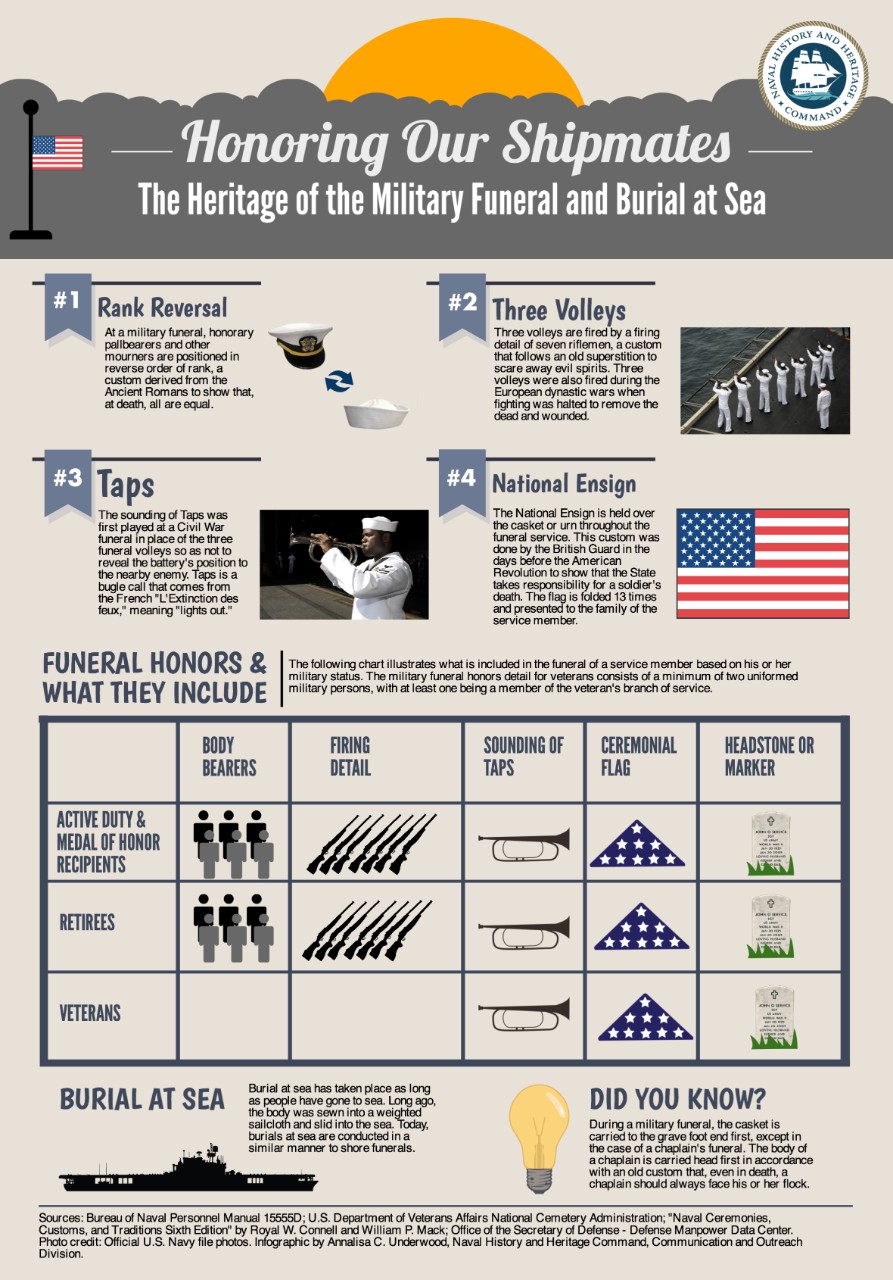 This infographic shares the history of the customs and traditions behind military funerals and burials at sea. Click image to download. (U.S. Navy graphic by Annalisa Underwood/Released) 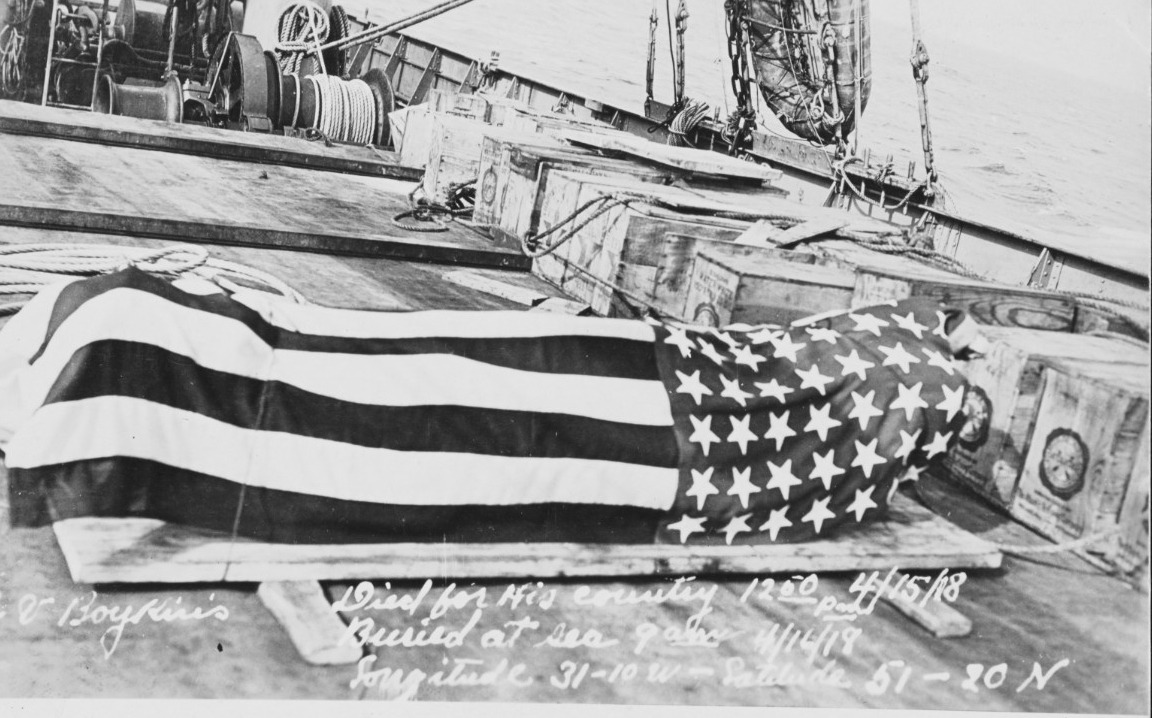 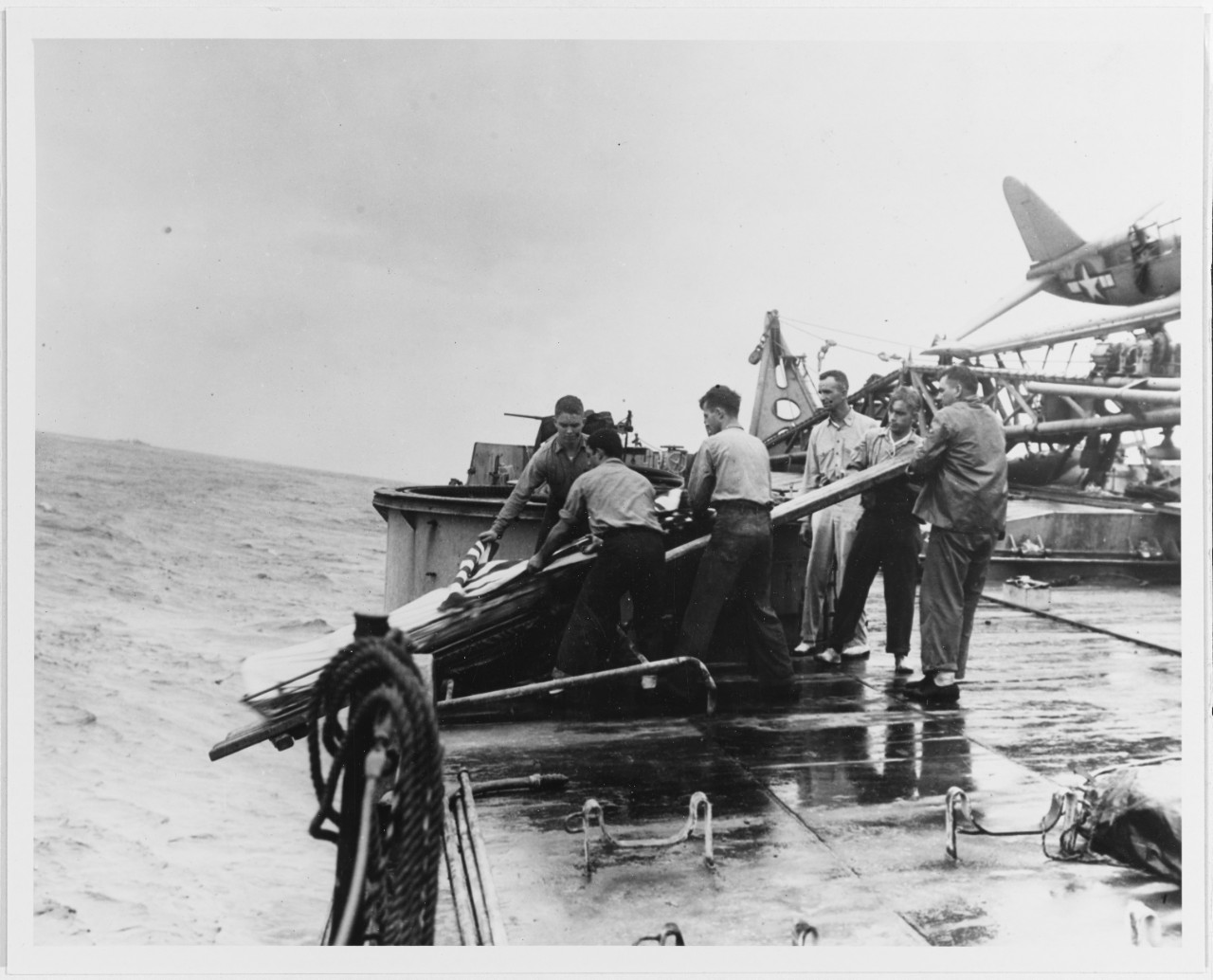 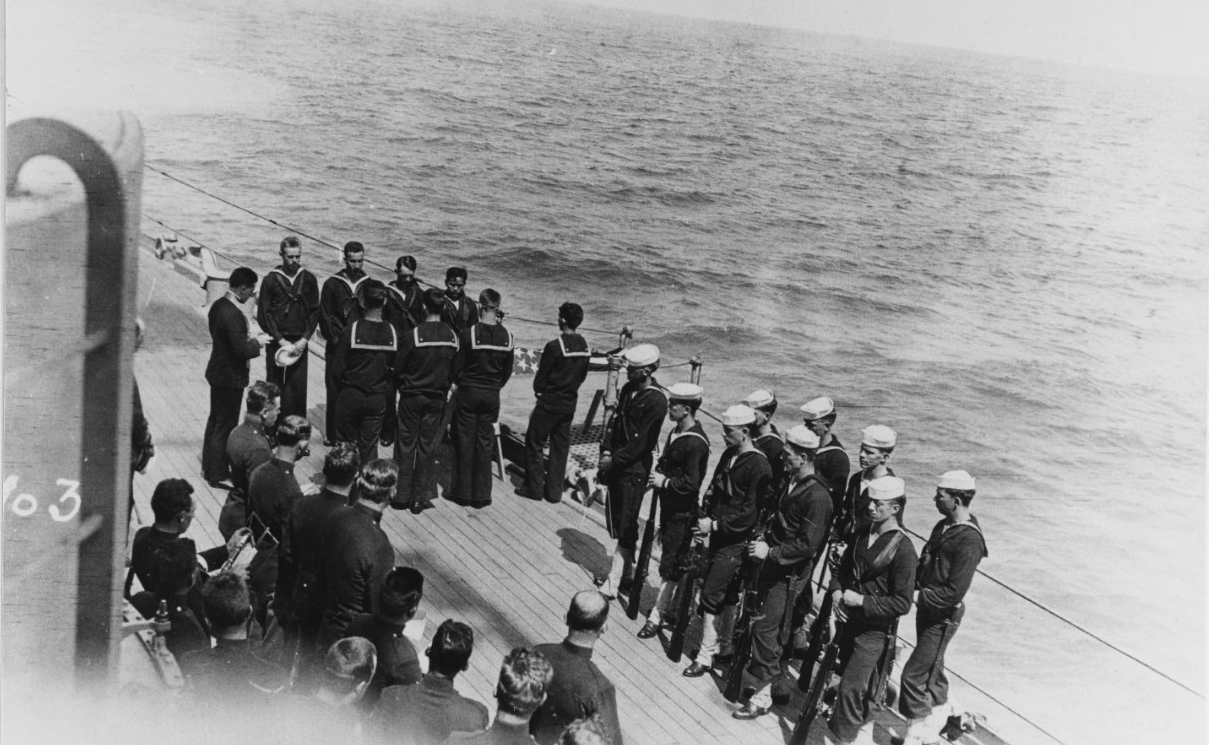 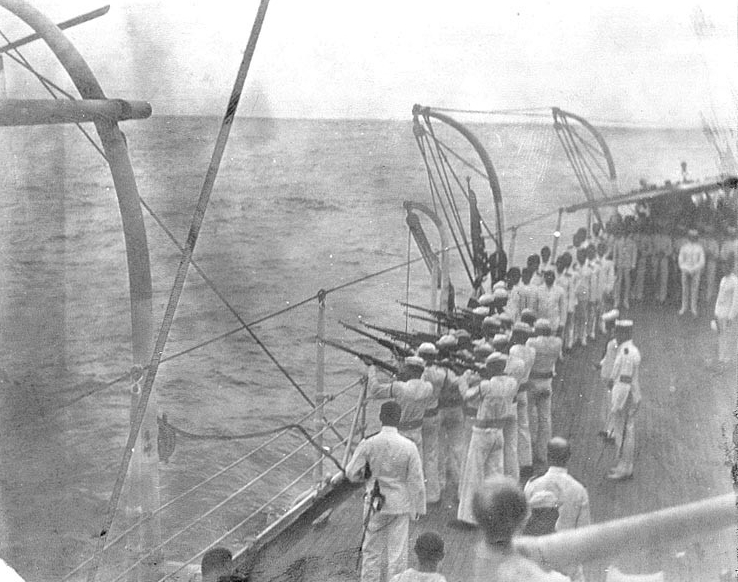 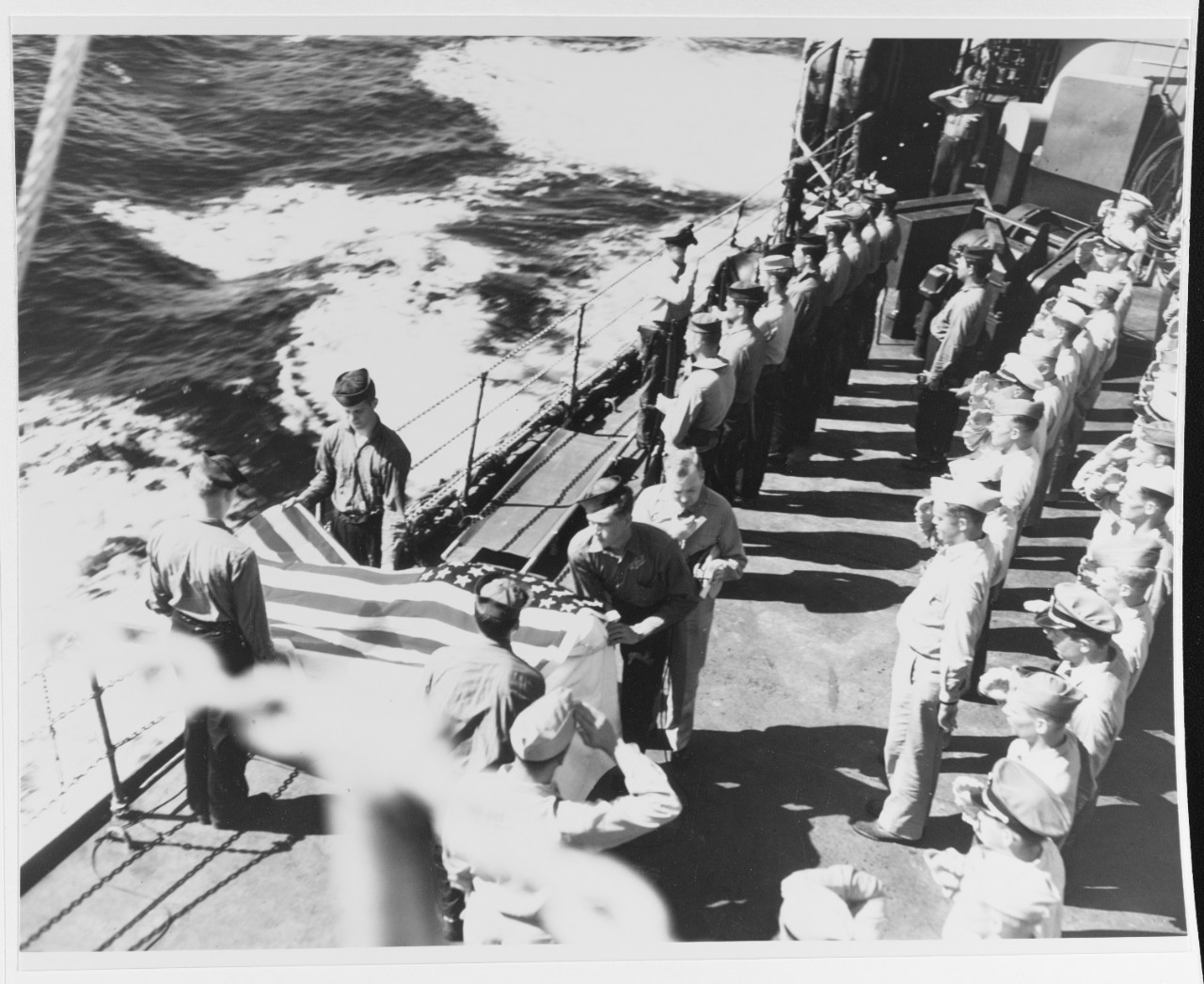 USS Hansford (APA-106). Burial at sea of a Marine who died on board of wounds received on Iwo Jima. Photo was taken between 25-28 February 1945 while Hansford was evacuating Iwo Jima casualties to Saipan. (80-G-K-15862) 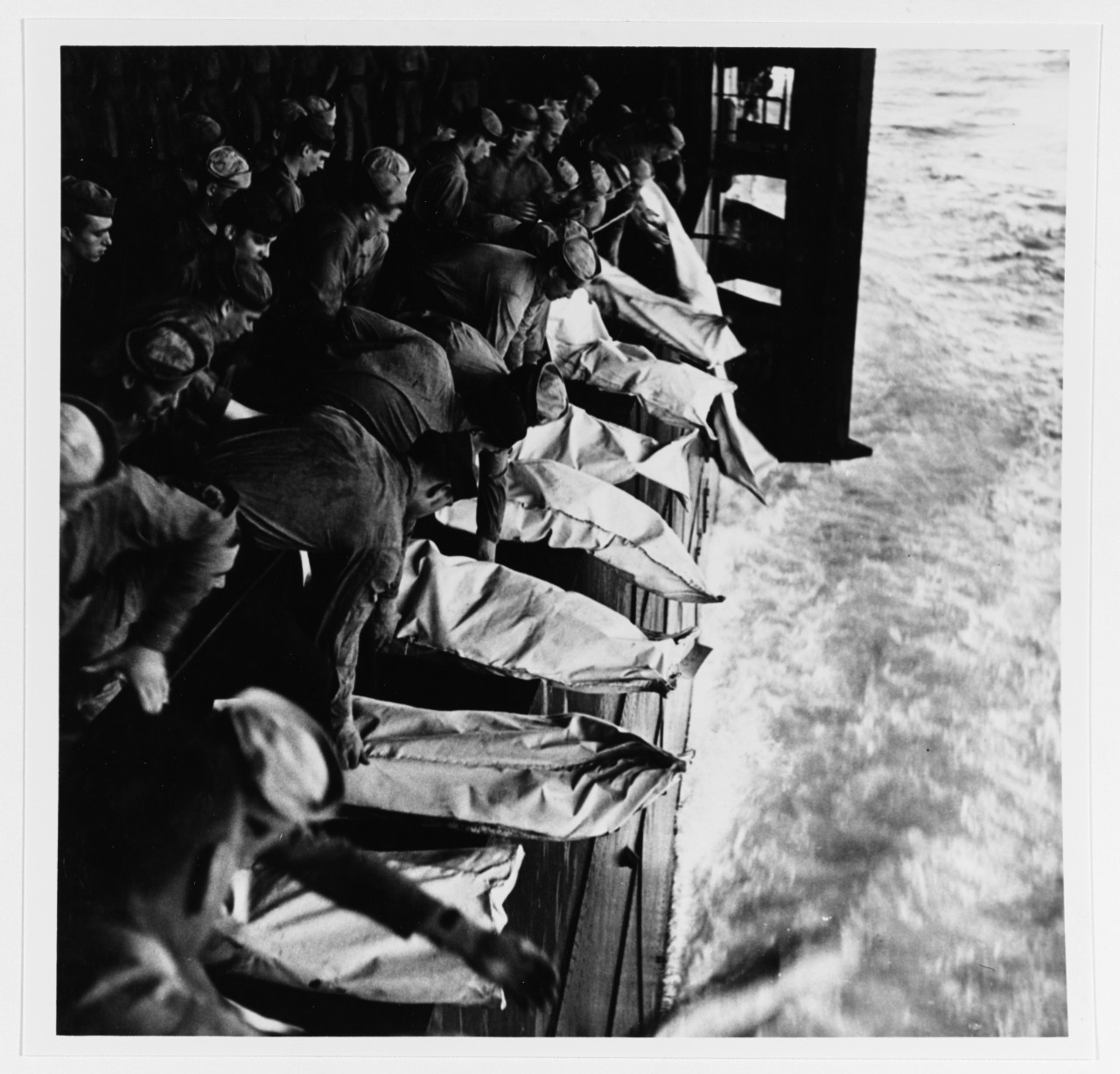 USS Intrepid. Burial at sea for the officers and men killed by Japanese kamikaze attack, 26 November 1944. The ship had been hit while operating off the Philippines on the previous day. (80-G-468912)