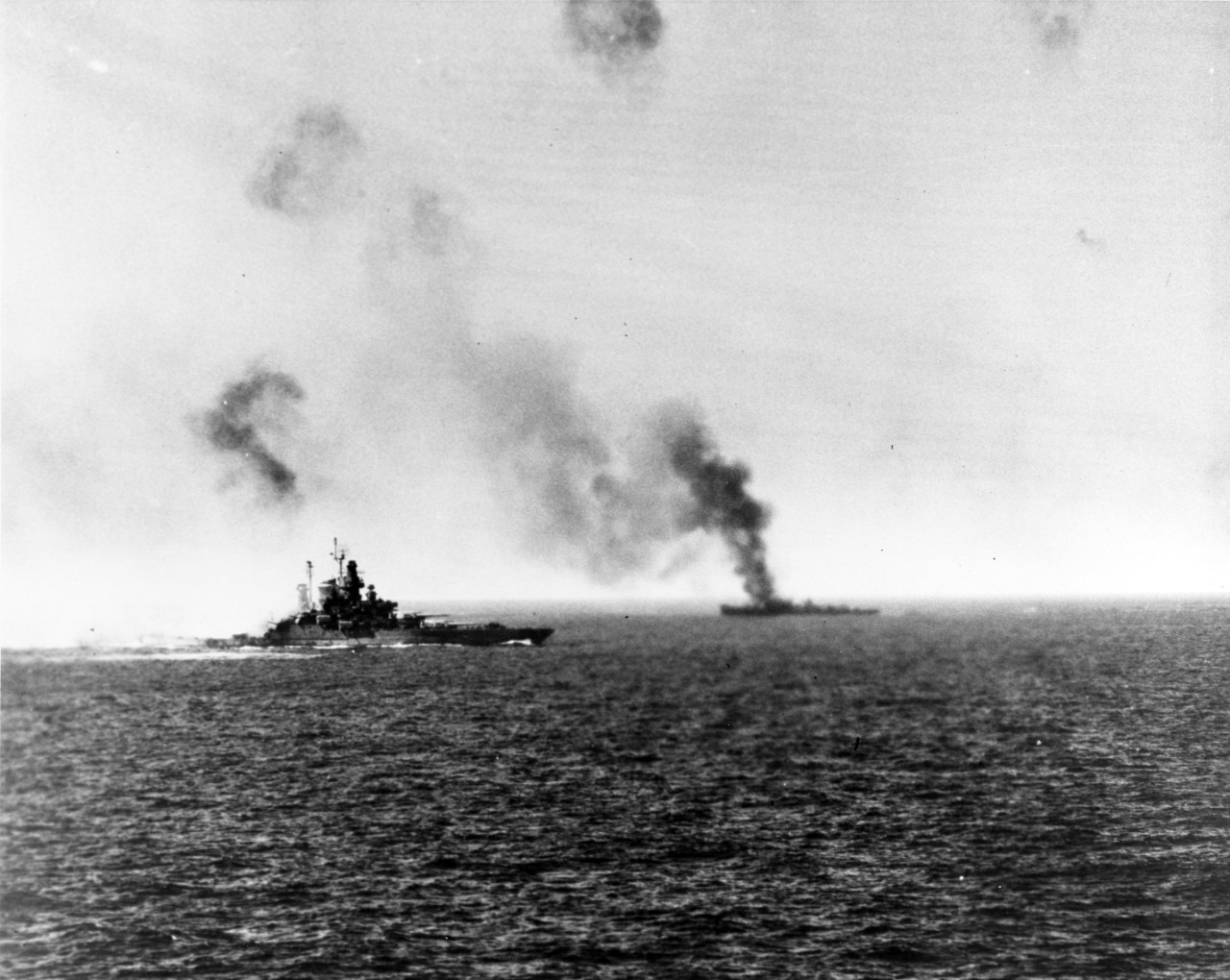 On 12 April 1945, President Franklin Delano Roosevelt died in Warm Springs, Georgia, of a hemorrhagic stroke. Vice President Harry S. Truman was sworn in as the 33rd President of the United States upon Roosevelt’s death. Mourned by civilians back home and service members still fighting around the world, Roosevelt led the nation through some of its darkest times. In the Pacific, the Japanese continued implementing Operation Ten-Go by staging the second largest air raid of Operation Kikusui II, only six days after the first massed kamikaze mission of the Battle of Okinawa began on 6 April. Battleship Tennessee (BB-43) became an early victim of the second wave of suicide aircraft. The young and inexperienced kamikaze pilots continued strikes against radar picket ships, but also shifted focus to larger, more lucrative targets, including battleships, troop transports, and aircraft carriers. 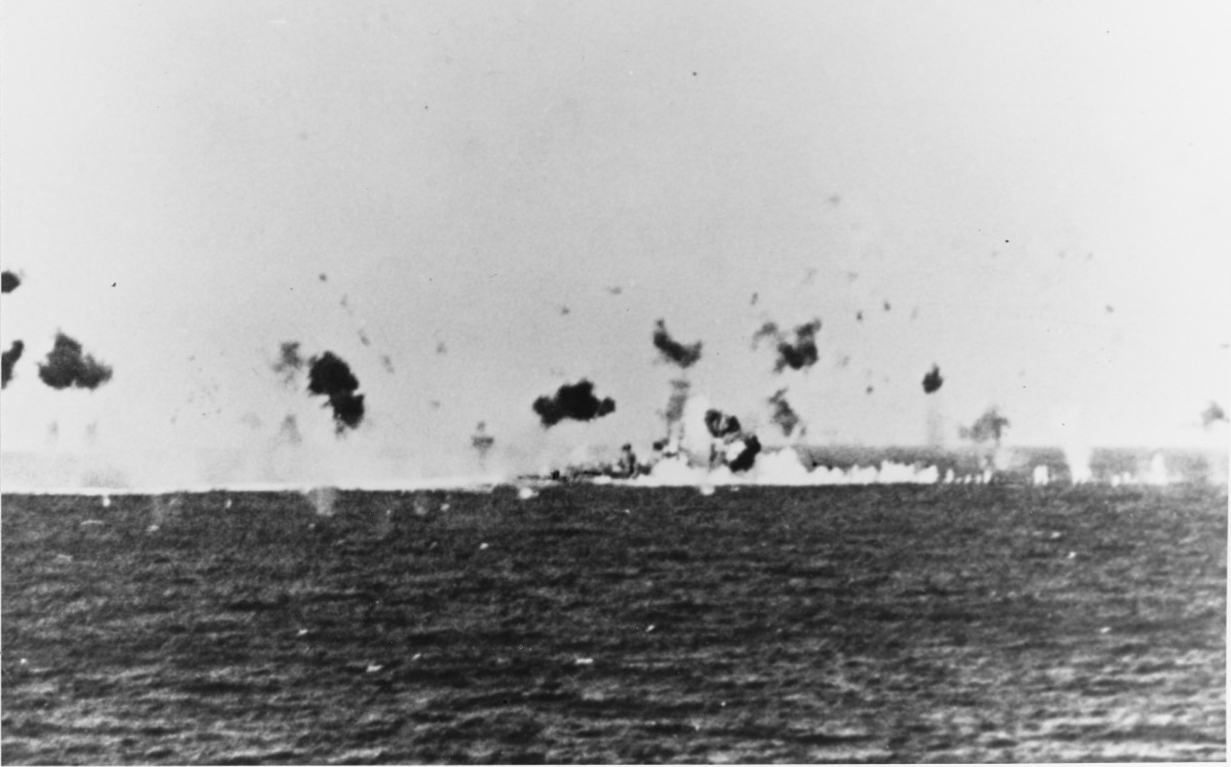 Nine other ships sustained damage, while destroyer Mannert L. Abele and landing craft support (Large) vessel LCS(L)-33, were sunk. Throughout the rest of the day on the 12th, the Japanese continued harassing the powerful Fifth Fleet, with several suicide aircraft making coordinated attacks on targets of opportunity. The destroyer Zellars (DD-777), attacked by three Nakajima B6N Tenzan torpedo bombers, splashed two of her attackers before a third crashed into her port side. The kamikazes 500-lb. bomb tore through Zellars, before exploding in her starboard side scullery, killing 29 and wounding 37. The destroyer managed to limp back to Kerama Retto for repairs.

Picket radar ships Cassin Young (DD-793) and Purdy (DD-734), steamed some 60 miles off Okinawa, before becoming targeted by 30 enemy aircraft. Several of the kamikazes fell victim to the guns of combat air patrol (CAP) aircraft and the lethality of gun crews on board the destroyers. After downing five suiciders, a sixth managed to fly through the hail of gunfire, before tearing through Cassin Young’s foremast, some 50 feet in midair, killing one Sailor and wounding another. A surviving kamikaze, shot up by destroyer gun crews, continued its trajectory towards the ship, its bomb coming loose and exploding against Purdy, killing 13 and wounding 27.

Destroyer Mannert L. Abele (DD-733) becomes the first of three radar pickets struck (and the first sunk) by rocket-powered Ohka aircraft on the 12th. Despite first suffering damage by a Mitsubishi A6M Zero, alert gunners on board fired upon an unidentified high-speed craft gliding just over the water. The Ohka smashed into the destroyer at her waterline, causing a second tremendous explosion and splitting Mannert L. Abele in two. Despite the later rescue of the majority of her crew after abandoning ship, 84 Sailors died in the attack.

Operation Kikusui III began in earnest early on the morning of 16 April. The Japanese hoped to increase the number of U.S. ships damaged and sunk, but were unable to duplicate the success of the second assault. Destroyer Pringle (DD-477), while serving on Picket Station No. 14, fought off several kamikazes attempting to strike her. An Aichi D3A1 Type 99 carrier bomber (“Val”) made it through the tremendous barrage of gunfire to slice into the destroyer’s forward stack, before smashing into the main deck and forward fire room. Following a terrible explosion, Pringle split in two and sank in only six minutes, taking 113 men with her to the bottom. 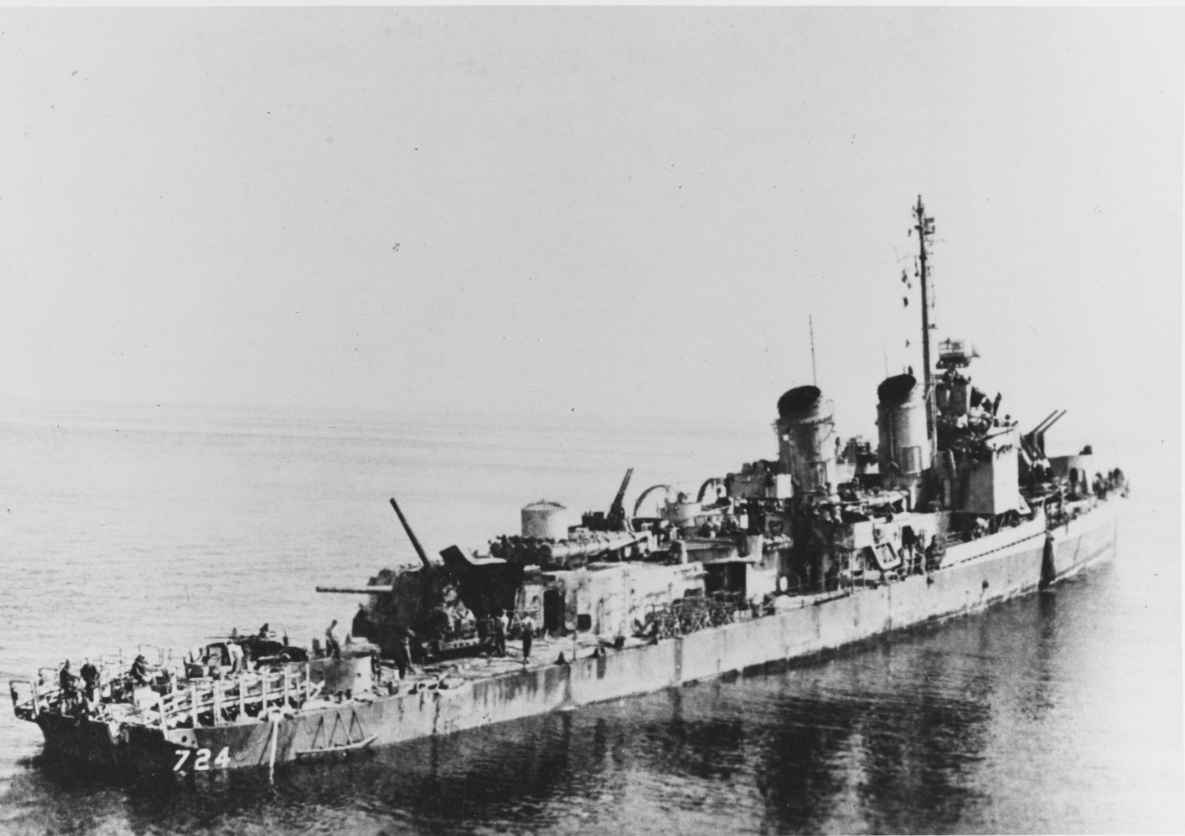 USS Laffey (DD-724) photographed from USS PCE-851, on Okinawa Radar Picket Station Number One, after being hit by five kamikazes, two bombs, and some near misses, on 16 April 1945. Naval History and Heritage Command photograph, NH 78233. 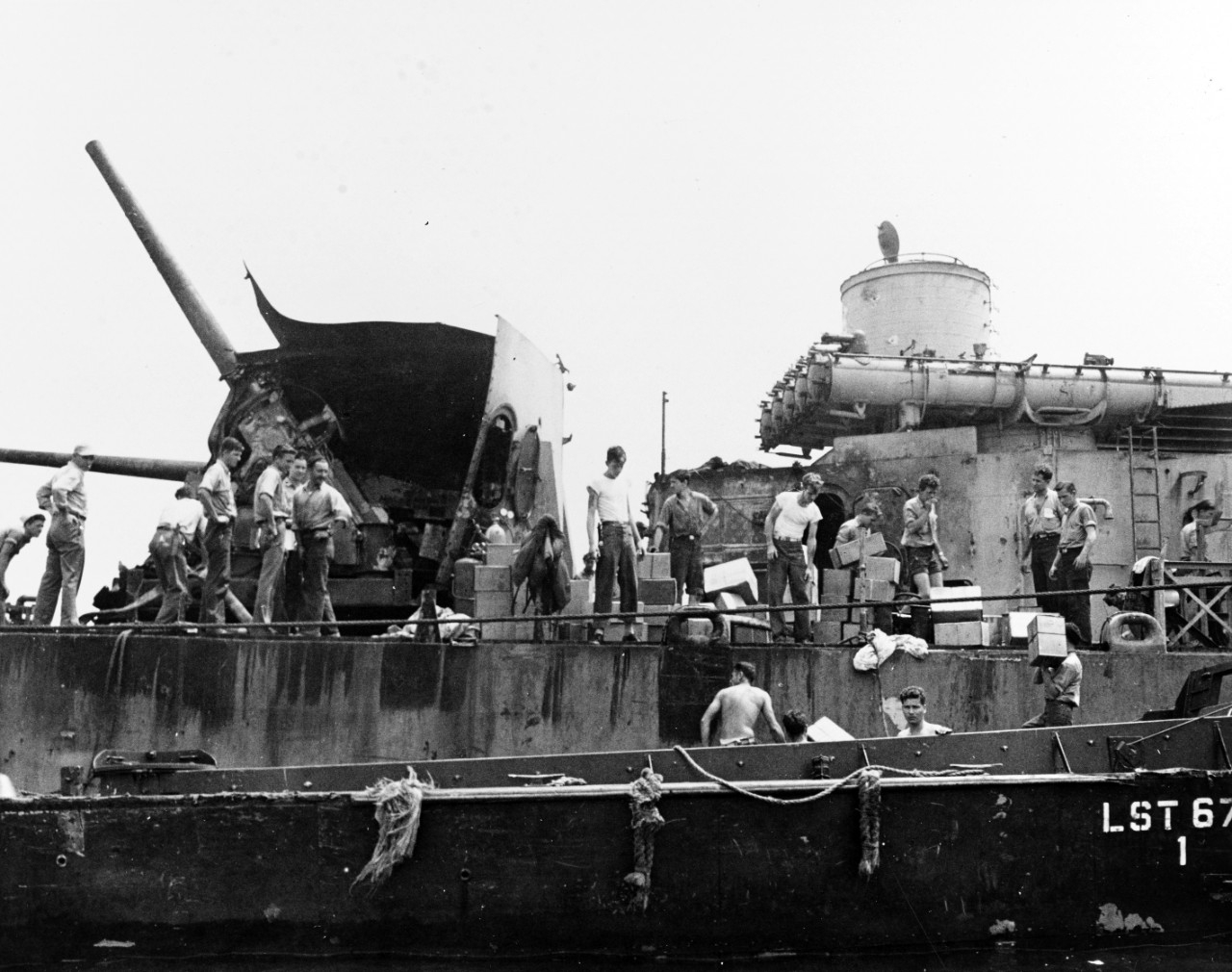 USS Laffey (DD-724) severely damaged by four bombs and five kamikaze hits on 16 April 1945. In action some 30 miles north of Okinawa. Shown here is a starboard side view abreast of No. 3 5" gun mount. Landing craft USS LST 677 is alongside. Naval History and Heritage Command photograph, NH 75432. 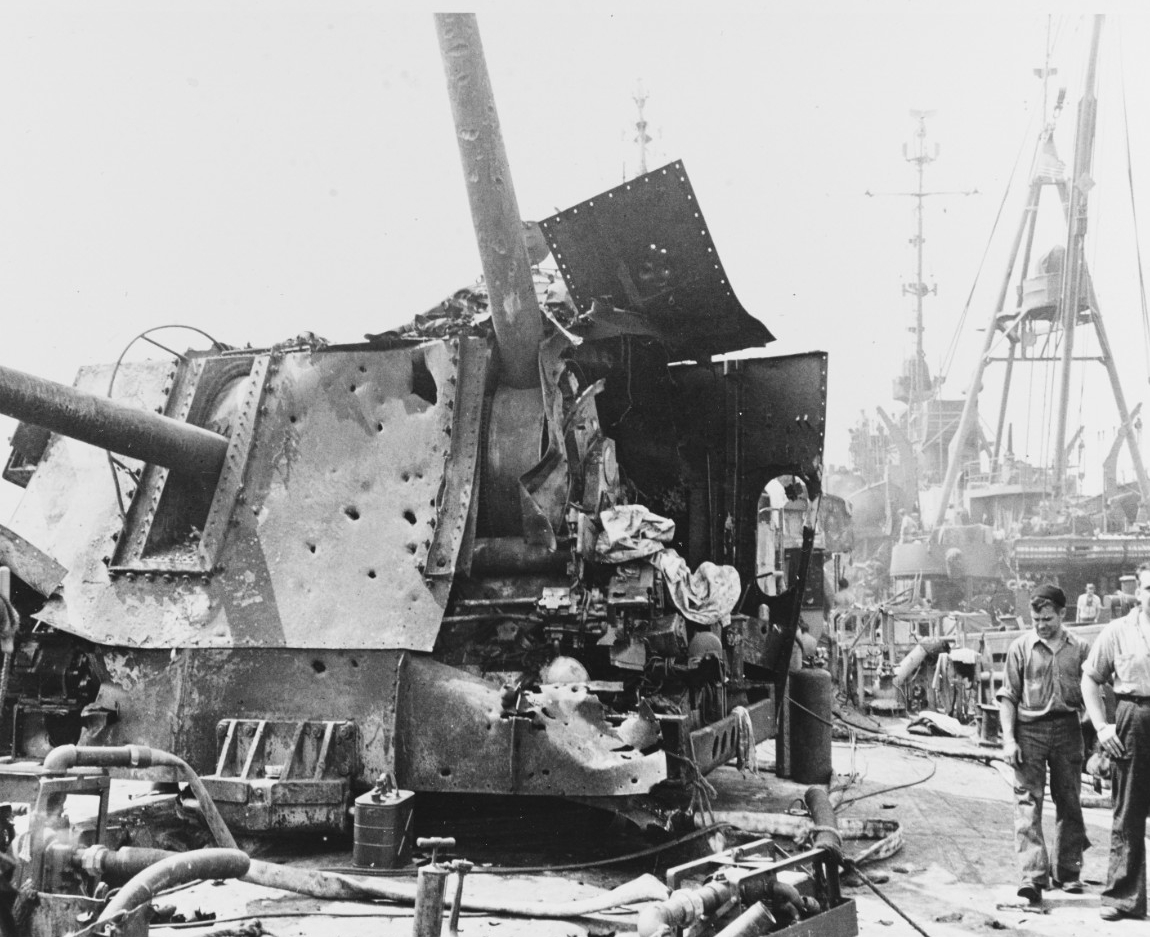 USS Laffey (DD-724) severely damaged by four bombs and five kamikaze hits on 16 April 1945. In action some 30 miles north of Okinawa. Shown here is a starboard side view of No. 3 5" mount. Naval History and Heritage Command photograph, NH 75430.

That same day, while steaming at Picket Station No. 1, destroyer Laffey (DD-724) withstood one of the most ferocious kamikaze attacks of the battle, and possibly the entire war. Withstanding several waves of suiciders for nearly 90 minutes, the destroyer fought off some 25 enemy aircraft, managing to splash nine while friendly CAP fighters destroyed several others. Laffey received severe damage from four bombs and five kamikaze hits, killing 32 and wounding 71. 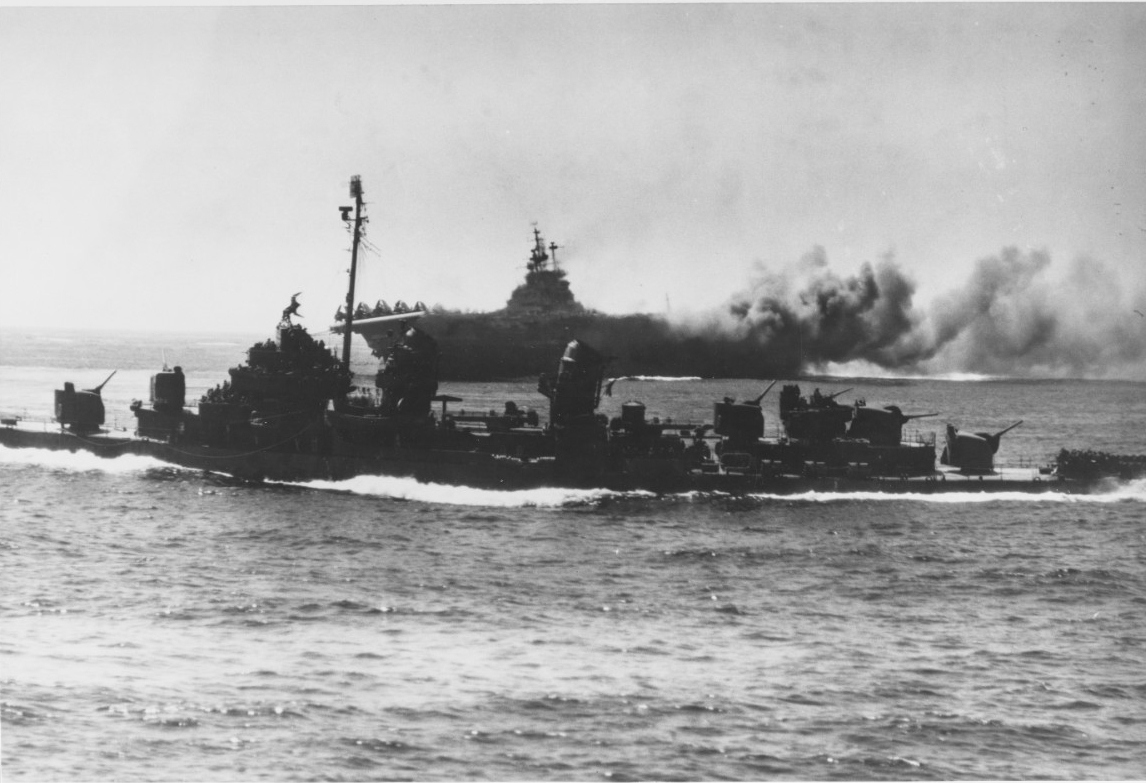 USS Intrepid (CV-11) afire after she was hit by a kamikaze off Okinawa on 16 April 1945. Photographed from USS Alaska (CB-1), as a Fletcher class destroyer steams by in the foreground. Official U.S. Navy photograph now in the collections of the National Archives, 80-G-328441. 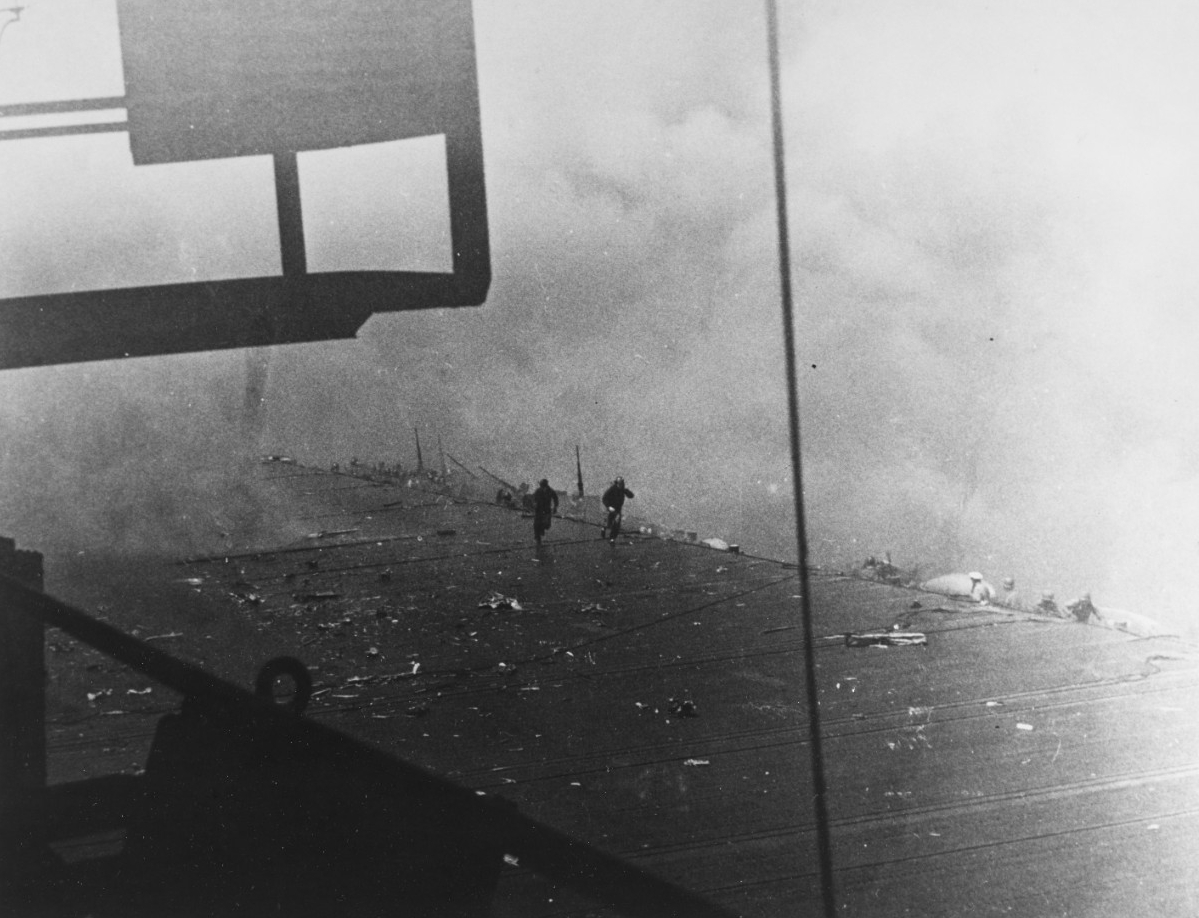 Two crewmen on USS Intrepid (CV-11) run up the carrier's debris-strewn flight deck just after she was hit by a kamikaze while operating off Okinawa, 16 April 1945. National Archives photograph, 80-G-273923.

During the air raid on 16 April, a kamikaze smashed into the flight deck of carrier Intrepid (CV-11), killing eight and wounding 21. In less than an hour, damage control teams extinguished flaming gasoline fires and made temporary repairs to the flight deck, allowing the recovery of aircraft just three hours after the attack. 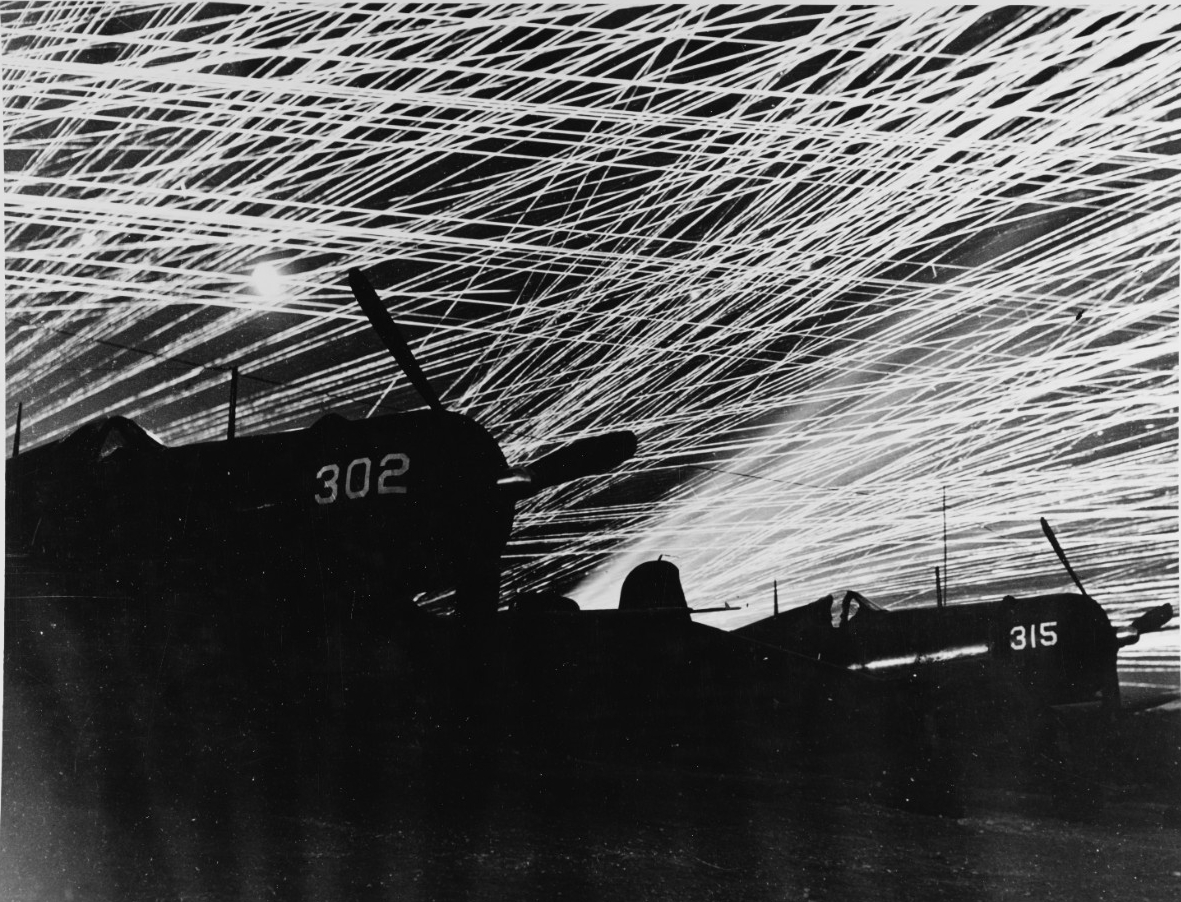 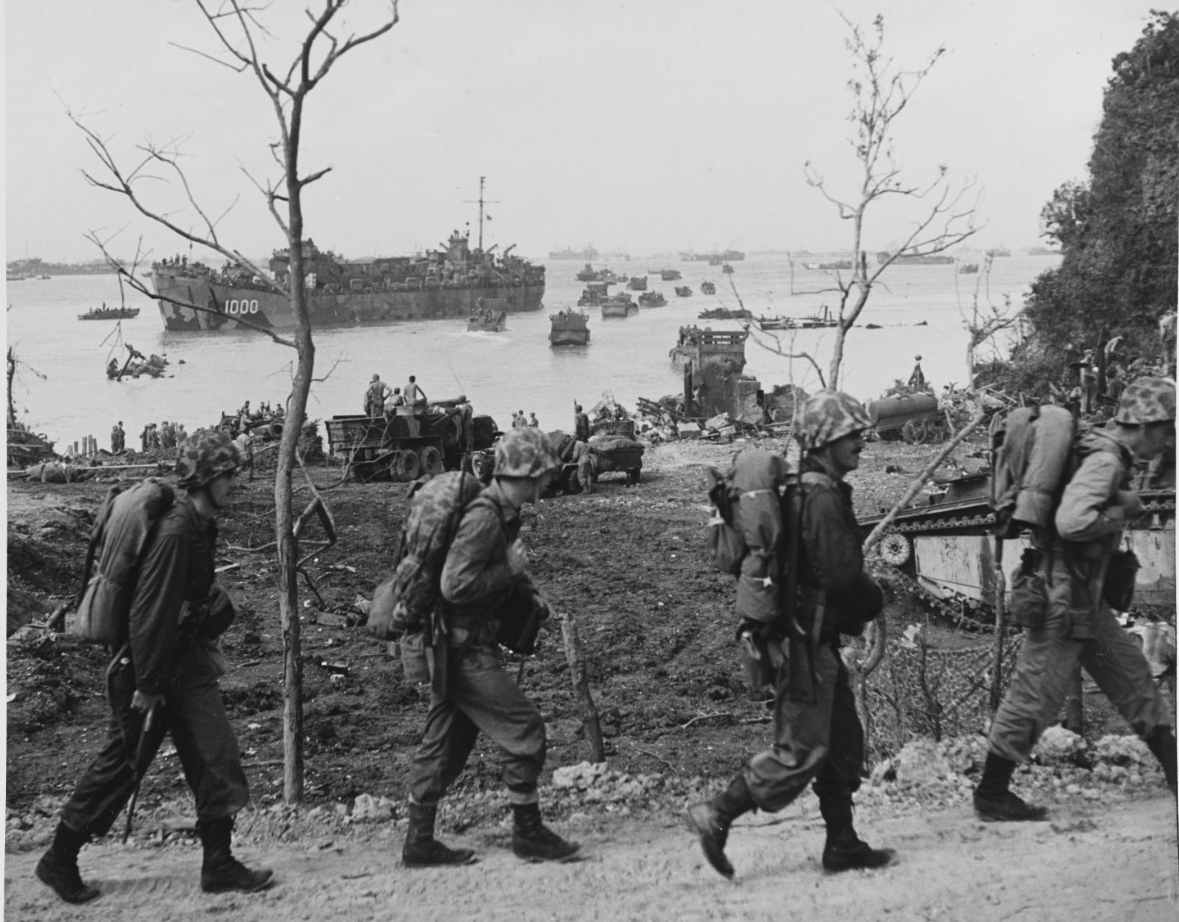 The second phase of the Okinawa Campaign consisted of the objectives of Ie Shima, a small island northwest of Okinawa, and Motobu Peninsula. With Rear Admiral Lawrence F. Reifsnider in command of the attack group, the U.S. Army’s 77th Division landed at Ie Shima on 16 April. The army troops, believing the Japanese had already abandoned the airfield, instead encountered 3,000 enemy soldiers. The Japanese previously constructed networks of underground tunnels as they had at Iwo Jima and Okinawa, causing the 77th Division delays in taking the island. Ie Shima was finally secured on 21 April.

On 17 April, famed war reporter Ernie Pyle, came ashore with the U.S. Army’s 77th Division at Ie Shima, a small island northwest of Okinawa. Touring the island with a group of officers, including Lt. Col. Joseph B. Coolidge, the commanding officer of the 305th Infantry Regiment, the men came under Japanese machine gun fire. Immediately fleeing their jeeps, the officers and Pyle took cover in a nearby ditch. The battle experienced Pyle inexplicably raised his head up to look around and a burst from the enemy gun struck the famed correspondent in his left temple, killing him instantly. 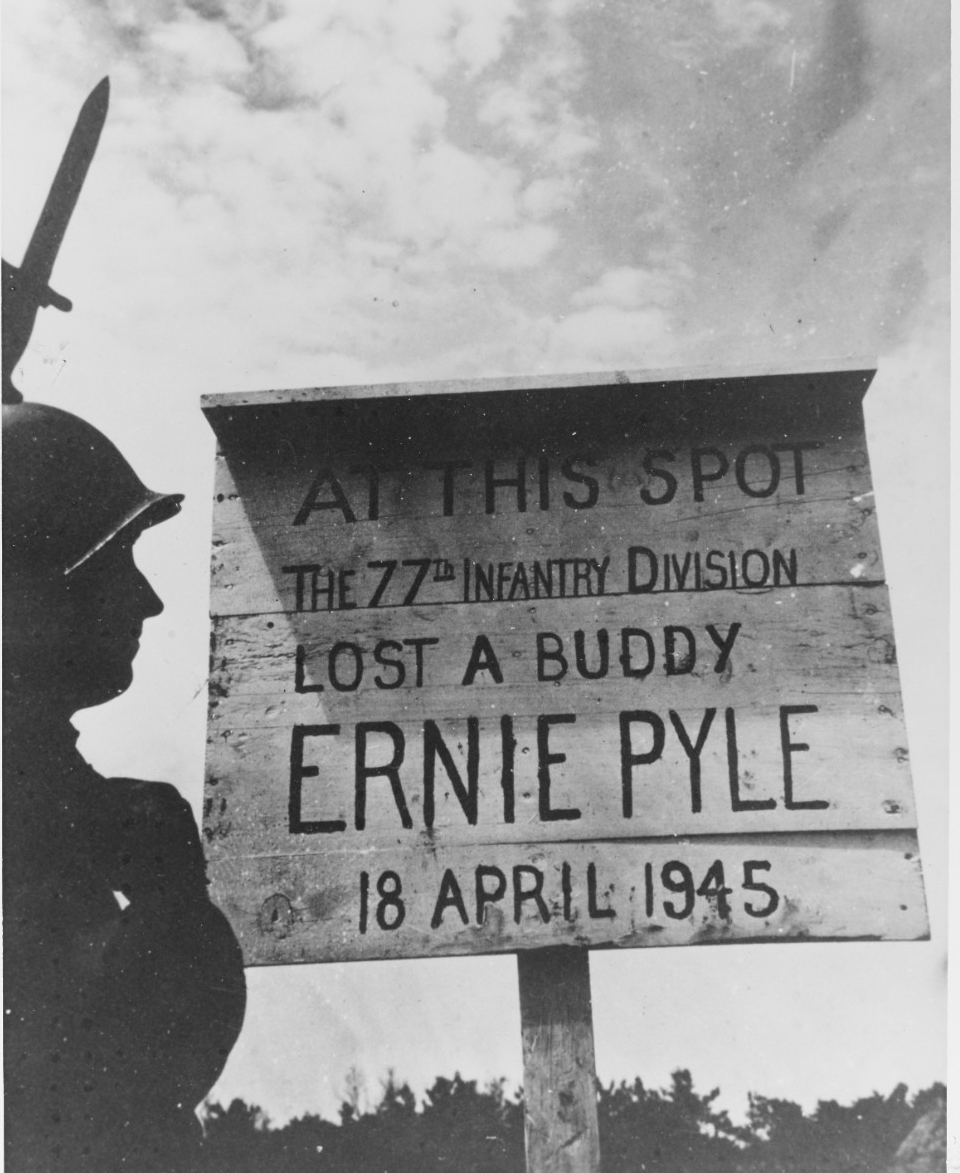