“I Still Remember the Shipmates Who Didn’t Survive”: The Destruction of USS Pringle 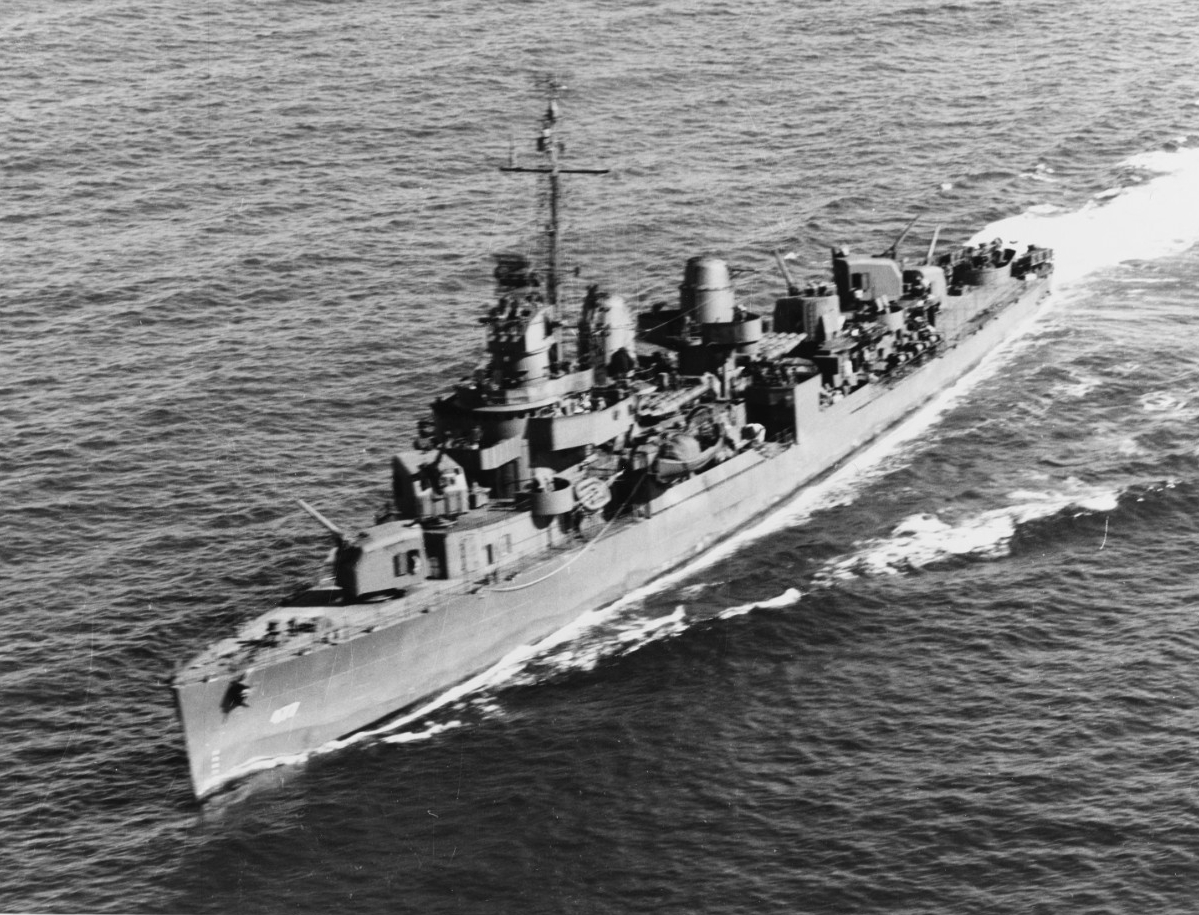 After staging off Ulithi for the upcoming invasion of Okinawa, destroyer Pringle (DD-477) weighed anchor on 27 March 1945. Joining the screen for Transport Group Baker, she arrived off Okinawa on the morning of 1 April (Love Day) and assumed screening duties while troops of the Tenth Army landed at their assigned beaches. After spending 6–13 April performing escort duties, Pringle received orders to Picket Station No. 14 on 14 April, steaming to approximately 70 miles northwest of Motobu Peninsula Okinawa. The picket stations were extremely hazardous, as the inexperienced kamikaze pilots often targeted the first U.S. ships found, usually a destroyer out beyond the safety of the fleet in order to warn of incoming air attacks.

Sonarman First Class Jack Gebhardt had already witnessed firsthand the devastation suffered by the “tin can” destroyers. Steaming into Kerama Retto, Pringle’s crew gawked at several damaged destroyers at anchor in the harbor, most victims of suicide attacks. No stranger to kamikazes, the crewmembers of Pringle had already experienced these devastating tactics during the invasion of the Philippines in November 1944. The day after she arrived at Leyte Gulf, suiciders attacked the anchored fleet on an almost continuous basis, causing Sailors to remain at battle stations for hours on end. Gebhardt recalled the stress from the near constant attacks escalated throughout the battle and “fear could be seen in the eyes of every man.” On an escort run to Mindanao in December 1944, Gebhardt watched a kamikaze crash into an ammunition freighter, exploding in a “blinding flash.” The pilothouse from the ammunition ship landed onboard a nearby ship, which in turn also blew up. “The debris rained down on Pringle, almost a full mile away from the blast.” There were no survivors from the freighter and the enemy air raids continued incessantly.

Prior to Pringle taking up her picket station off Okinawa, the Japanese launched Operation Kikusui, an offshoot plan of the larger Operation Ten-Go. The former operation, a series of ten massed suicidal air attacks, began with Kikusui I on 6 April. On the morning of 16 April, the Japanese launched Kikusui III, sending up approximately 500 aircraft, of which 220 were kamikazes. Pringle reported multiple air contacts on radar at 30 miles out. At 0815, while a combat air patrol (CAP) of Vought F4U Corsair aircraft flew overhead for protection, a group of enemy aircraft approached from the north-northwest. Chasing some of the enemy off, the Corsair fighters eventually returned to base without being properly relieved. With more enemy aircraft approaching by 0840, further requests for a new CAP went unheeded. Eleven minutes later, a kamikaze began a suicide run at Pringle. The destroyer helped send the suicider down in flames before managing to turn another away with a hail of gunfire.

At 0910, three Aichi D3A1 Type 99 carrier bombers (“Vals”) flew towards the task group at 2,000 feet altitude, weaving in and out of range, keeping just outside of gun range from 11,000 to 12,000 yards. Pringle’s 5-inch guns opened fire when the Vals closed to within 10,000 yards, splashing the first kamikaze. Lt. Cmdr. John L. Kelley, Jr., the destroyer’s commanding officer, later stated that the enemy pilots’ maneuvering fatigued his gun crew loaders. 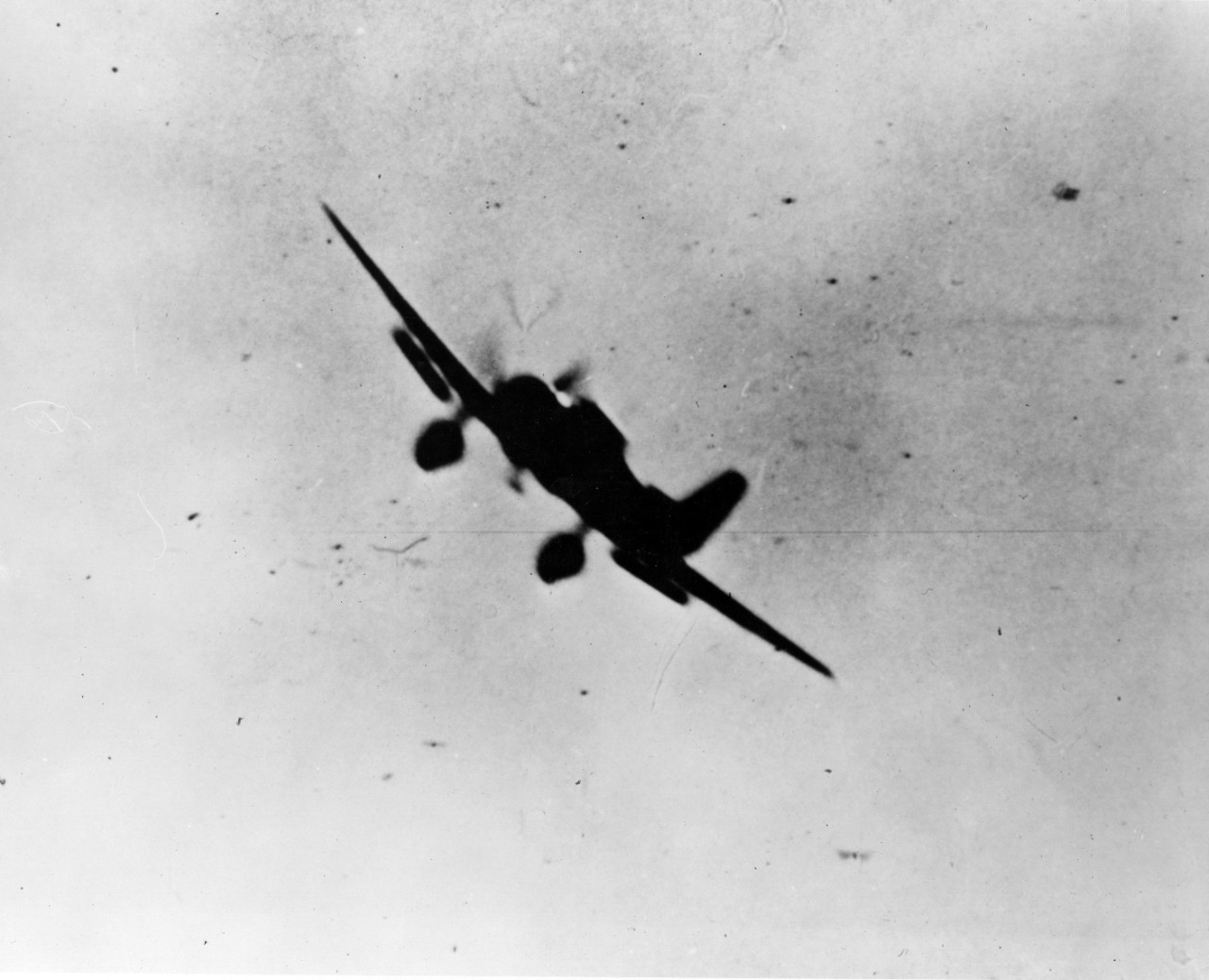 One of the suiciders began a shallow dive from 1,000 feet, coming about off Pringle’s stern. At 0920, the kamikaze slammed into the destroyer’s forward stack, obliterating the starboard wing of her bridge and smashing through the main deck into the forward fireroom. At 0926, an explosion tore through Pringle, splitting her in half and sending her to the bottom in five minutes. Kelley later remarked, “There was no opportunity to institute any damage control.”

Seaman First Class Charles P. Maurer recalled, “I just had time to hit the deck when the bomb hit. I was trapped inside for two or three minutes, but the concussion caused by the explosion sucked off the hatches and we found one we could force open.” After giving the order to abandon ship at approximately 0931, survivors spent the next two to three hours awaiting rescue as the battle still raged around them. Kelley listened as his men sang songs to pass the time, “before they lost their breath,” and resumed waiting. The reason for the delay in picking up the survivors occurred due to the continual harassment of the rescue ships by Japanese aircraft. Destroyer-minesweeper Hobson (DMS-26), which had already been struck by a kamikaze’s bomb on her main deck during the fighting, noted in her after action report that the enemy pilots were “evidently trying to strafe Pringle survivors.” After holding off the kamikaze threat, Hobson eventually pulled 100 Pringle survivors from the sea, at one point firing her 20-millimeter guns at a pair of sharks swimming towards the last of the survivors.

Hobson, landing craft support (large) LCS(L)-34, and landing ship medium, rocket, LSM(R)-191, managed to rescue 251 Pringle survivors. In the end, 62 of Pringle’s crewmembers lost their lives while 43 out of the 113 Sailors wounded received transfer to the hospital ship Hope (AH-7). After Japan surrendered, Kelley received the Silver Star for “conspicuously courageous manner” in which he fought off several attacking aircraft during the enemy’s third massed kamikaze assault off Okinawa.

The same day a suicide plane managed to sink Pringle, the Japanese inflicted damage upon seven other U.S. Navy ships, including carrier Intrepid (CV-11). Destroyer Laffey (DD-724), undergoing a nearly 90 minute assault from multiple suiciders, received horrific damage caused by four bombs and five kamikazes smashing into her. Thankfully, Laffey would survive the onslaught, her crew demonstrating the sort of tenacity and fortitude that had become the hallmark of “tin cans” such as her and Pringle.

Despite the heroism displayed onboard the picket ships during the seemingly constant air attacks, the crews remained at a heightened state of alert, often manning battle stations for hours and sometimes days on end. With the front lines of the battle extended out to sea, the Sailors fighting off Okinawa gained valuable experience in gunnery, damage control, and the care of badly burned and wounded shipmates, learning lessons that reduced the destructive toll kamikazes were increasingly exacting on the fleet. However, the severe stress, fear, and weariness remained, taking a further toll on the crews of the tin cans. For Gebhardt, the memories of the shattered Pringle remained with him for the rest of his life. As he noted in an interview conducted after the war, “To this day I still remember the shipmates who didn’t survive… The sight will never leave my mind or forget the faces of friends killed.”