“Closer Than Brothers”: The Loss of USS Twiggs at Okinawa 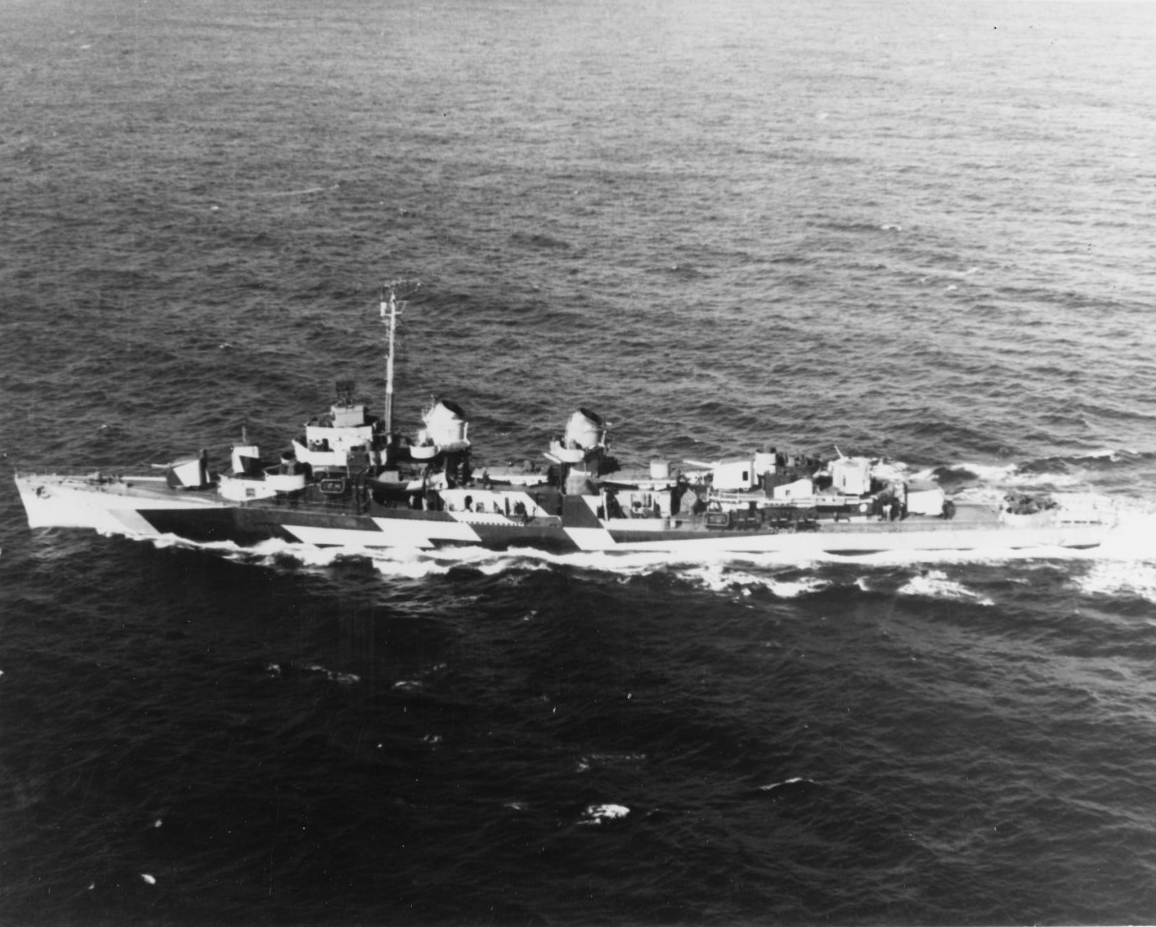 A veteran of several Pacific battles, including Luzon and Iwo Jima, destroyer Twiggs (DD-591) arrived off Okinawa on 25 March 1945 as part of a screen for carrier Ticonderoga (CV-14). While enroute, Seaman John W. Lindsay noticed several passing ships damaged by kamikazes: “Every day we’d pass one or two more ships being towed…but we get to Ulithi…there must’ve been 20 or more ships that had been hit.” Although kamikaze attacks had been occurring since late 1944, the frequency and intensity of such attacks had increased drastically in recent months. Twiggs crewmembers knew what they were likely to encounter at Okinawa, with Lindsay recalling that they “were really psyched up for kamikazes.”

The crew of Twiggs was as close as any within the Navy, with many of her crew having been on board since the ship’s shakedown cruise off Bermuda in December 1943. Reflecting on his experiences years later, Torpedoman’s Mate Second Class Donald Witmer could still vividly recall many of their shared experiences, including participating in a crossing the line ceremony off Truk in early 1944, witnessing the explosion of ammunition ship Mount Hood (AE-11) in Manus Harbor on 11 November 1944 (which Witmer described as, “The closest thing to an atomic explosion I want to see!”), and, yes, dealing with kamikaze attacks. While off the Philippines on 4 January 1945, the escort carrier Ommaney Bay (CVE-79) had received such severe damage that destroyer Burns (DD-588) was forced to sink her. Twiggs was on the scene at the time, rescuing 211 survivors from the stricken carrier. She herself would subsequently escape a near hit by a kamikaze on 17 February, while supporting operations off Iwo Jima.

After steaming to Okinawa, Twiggs supported the bombardment group on 1 April (Love Day), and then joined with the other “tin can” destroyers a week later to take up picket duties to the west of the island. According to Witmer, the destroyer was “one of the first ships…to come off radar station two without being damaged in any way.” Both he and his shipmates recognized, however, that they were very lucky to leave the area unscathed, as several other destroyers at the picket stations had a “bad time at Okinawa.” 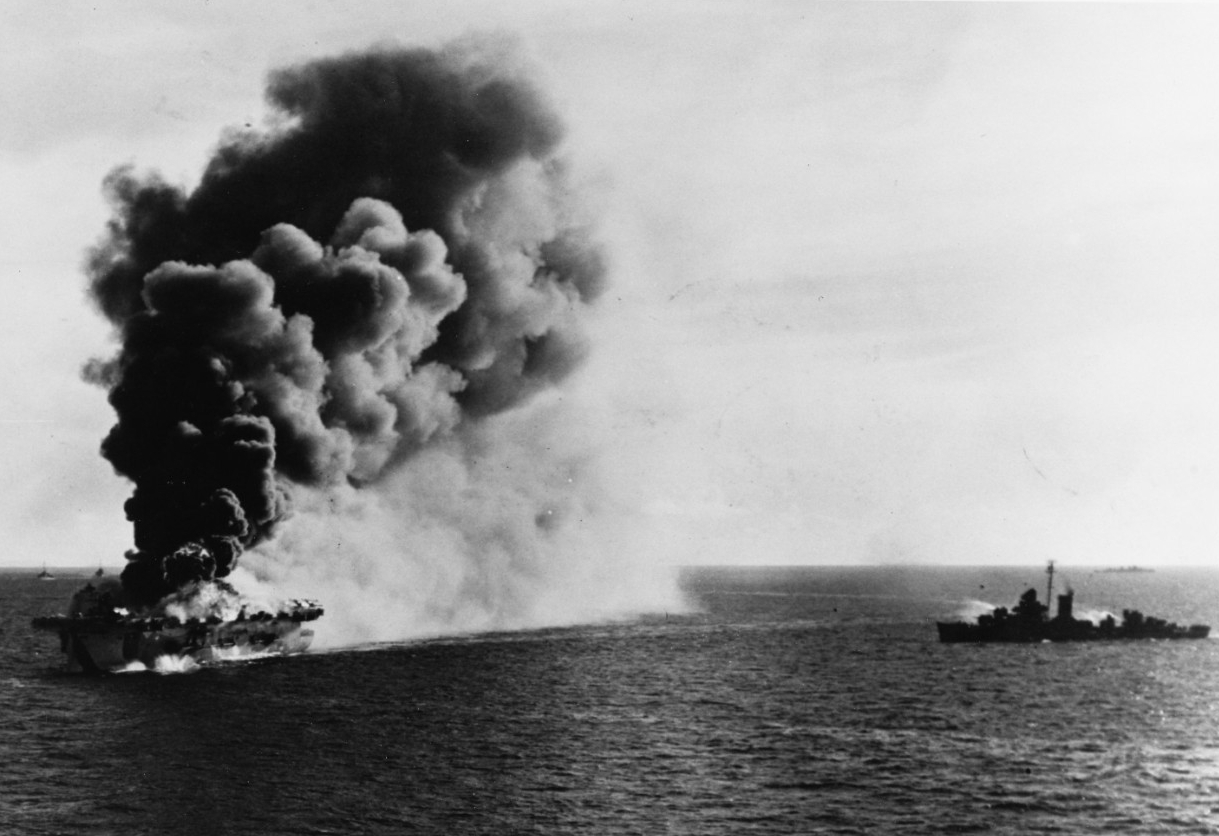 Ommaney Bay (CVE-79) burning in the Sulu Sea, off Luzon, on 4 January 1945, during the Lingayen Operation. She had been hit by a kamikaze. A destroyer is standing by with fire hoses ready. Naval History and Heritage Command photograph, NH 89350.

The luck previously experienced by Twiggs began to change on 28 April after a kamikaze’s bomb landed near the destroyer’s hull plating, causing significant structural damage. The grazing hit resulted in a 20-foot gash near the bow of the ship, killing ten men and wounding eight. After serving with the gunfire and covering forces for a month, Twiggs received orders on 25 May to make her way to one of the dreaded radar picket stations. It was here that her luck ran out completely. While in the western fire support area at 2030 on 16 June, a low-flying enemy aircraft dropped a torpedo striking Twiggs on her port side, blowing up her number 2 magazine. The kamikaze quickly circled the destroyer before smashing into her, causing further damage and intense fires to break out. The destroyer’s commanding officer, Commander George Philip Jr., was mortally wounded on the bridge. Having served for all 84 days of combat action Twiggs encountered off Okinawa, he would posthumously receive the Navy Cross.

Several men trapped below decks looked for any escape topside while others attempted damage control measures to put out fires and burning fuel oil engulfing the ship. Eventually, it became clear that the ship was going to sink, leading many of the crew to abandon ship. Out of 188 Sailors that survived, fellow destroyer Putnam (DD-757) rescued 114 of them. It was from her deck that many of them witnessed Twiggs’ final moments, with Putnam’s war diary recalling a “tremendous explosion on the Twiggs, followed by a momentary inferno of fire…she sunk in less than a minute.” Such was the violence of her end that a hail of shrapnel fell over the survivors and several rescue ships.

TM2c Witmer barely made it off Twiggs before she sank. Pinned down by wreckage at his battle station on the bridge, shipmates pulled him out before abandoning ship. Witmer “slid into the rejuvenating waters of the Pacific” just as the ship was beginning to sink. Suffering from burns and a broken leg that bent the wrong way, he watched with great sadness as Twiggs slipped beneath the waves. After two hours in the water, a whaleboat picked him and his shipmates up and brought them onboard Putnam. Although spared the fate of so many of his fellow Sailors, he would still have to endure nearly a year of moving back and forth between Navy hospitals before finally being discharged.

In total, Twiggs lost 152 men to the kamikaze attack off Senega Shima, one of just five destroyers to have more than half their crew killed and wounded in suicide attacks (the others being Halligan (DD-584), Luce (DD-522), Morrison (DD-560), and Drexler (DD-741) during the battle. With Okinawa secured a little over a week later, and the war nearly over, the survivors received 30 days leave upon returning home, with several being permanently discharged from service after the Japanese surrender on 15 August.

Despite her tragic end, Seaman Charles W. Knittel nonetheless fondly remembered Twiggs as “quite a little ship.” Recalling the good times with shipmates onboard the destroyer and her service during the war, he said, “When you go to a small ship like that, you’re closer than brothers, believe me.” Born in 1927, Knittel was the youngest man onboard the ship, but discovered friendships forged in war that lasted the rest of his life. As he recounted, “Everybody looked after one another. I’m closer to my shipmates today then now, 60 years later…but we fought together all the time…and it just instills something in you.”