A bay off the coast of Alaska.

After commissioning and fitting out at Astoria, Oregon, and conducting shakedown in Puget Sound, Ommaney Bay sailed on 19 March 1944 from Oakland, Calif., with passengers and a cargo of supplies and aircraft for Brisbane, Australia. By 27 April she had completed her mission and was back in San Diego, where she began a rigorous ten days of carrier qualification landings, drills and tests. Then, after minor alterations and repairs, the ship sailed 10 June for Pearl Harbor. Until 12 August she trained air groups and squadrons there in the art of operating from baby flattops, then she sailed to Tulagi to rehearse for the invasion of the Palau Islands. From 11 September until the beginning of October Ommaney Bay stood off Peleliu and Anguar Islands and provided air cover for the fleet and close support strikes for the forces ashore.

Ommaney Bay sailed to Manus to renew her depleted stock of fuel and ammunition, then joined Rear Admiral Stump's "Taffy 2" for the invasion of Leyte. At the beginning of the Battle off Samar on 25 October 1944, the escort carriers began launching air strikes in an effort to cripple as many of the approaching enemy force as possible. In the ensuing battle, Ommaney Bay's planes contributed the sinking of one Japanese cruiser and helped to damage a number of other warships. Ommaney Bay launched some 6 strikes that day, and helped to turn threatened defeat into victory.

The carrier spent the month of November at Manus and Kossol Passage for availability and replenishment, then, from 12 to 17 December 1944, operated in the Mindanao and Sulu Seas in support of operations on the Island of Mindoro. On the 15th, a day of heavy enemy air attacks, she splashed an enemy bomber as it dived for the ship from the port bow. On 19 December she returned to Kossol Passage to prepare for the landings in Lingayen Gulf.

Ommaney Bay left on New Year's Day 1945 and transitted Surigao Strait two days later. The next afternoon, while in the Sulu Sea, a twin-engine Japanese suicide plane penetrated the screen undetected and made for Ommaney Bay. The plane nicked her island then crashed her starboard side. Two bombs were released; one of them penetrated the flight deck and detonated below, setting off a series of explosions among the fully-gassed planes on the forward third of the hanger deck. The second bomb passed through the hanger deck, ruptured the fire main on the second deck, and exploded near the starboard side.

Water pressure forward was lost immediately, along with power and bridge communications. Men struggling with the terrific blazes on the hangar deck soon had to abandon it because of the heavy black smoke from the burning planes and ricocheting .50 caliber ammunition. Escorts could not lend their power to the fight because of the exploding ammunition and intense heat from the fires. By 1750 the entire topside area had become untenable, and the stored torpedo warheads threatened to go off at any time. The order to abandon ship was given.

At 1945 the veteran was sunk by a torpedo from the destroyer Burns (DD-588). A total of 95 Navymen were lost, including two killed on an assisting destroyer when torpedo warheads on the carrier's hangar deck finally went off. 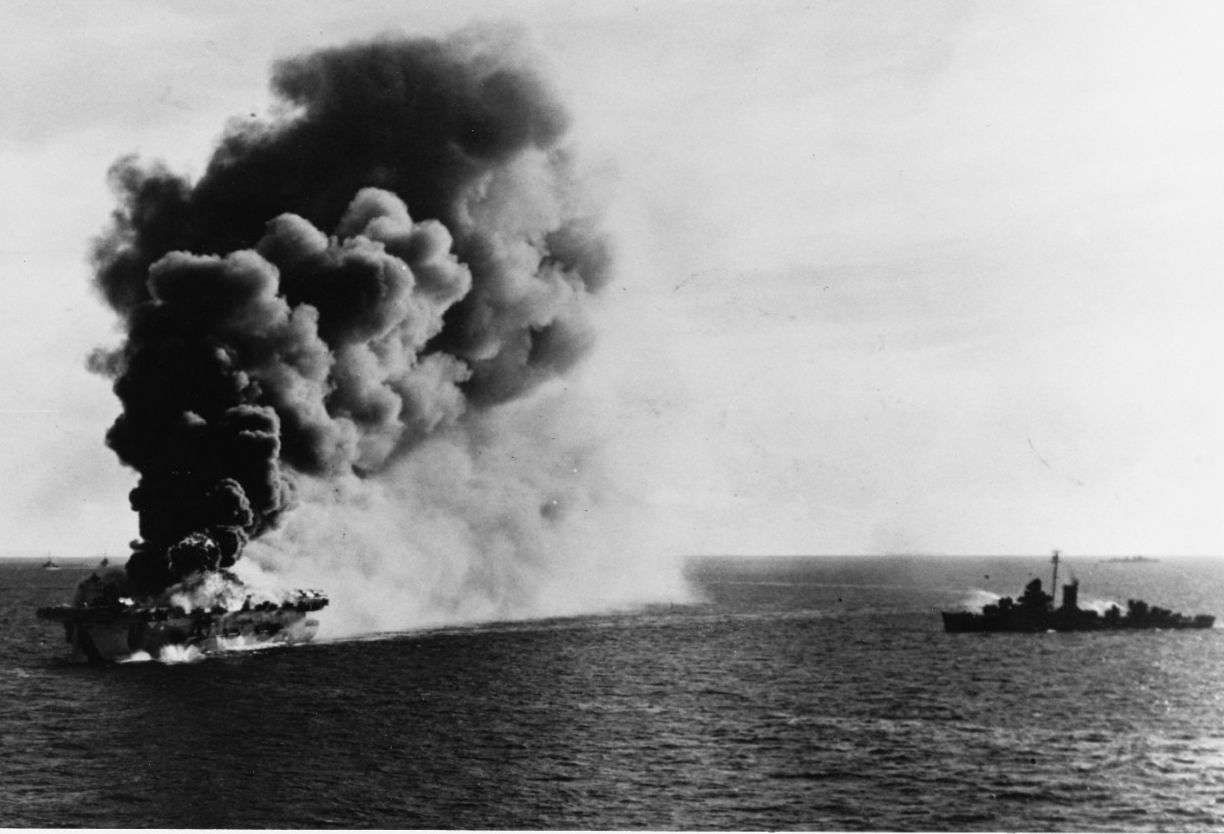 Ommaney Bay (CVE-79) burning in the Sulu Sea, off Luzon on 4 January 1945 during the Lingayen Operation. She had been hit by a kamikaze. A destroyer is standing by with fire hoses ready. Copyright owner: Naval History and Heritage Command. Catalog#: NH 89350