“Those Suicide Pilots Knew Where to Hit”: The Sinking of USS Little 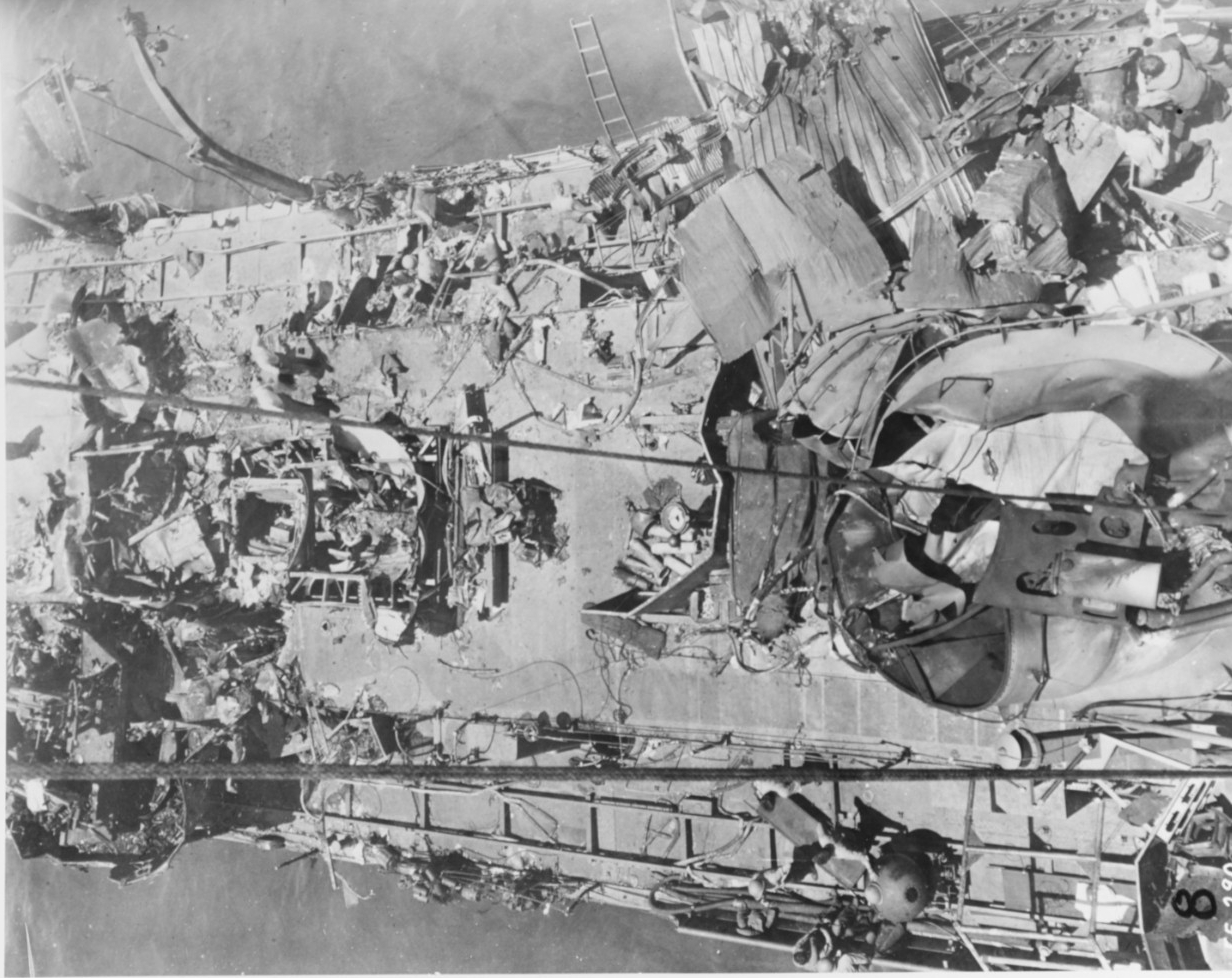 Damage amidships received during kamikaze attacks off Okinawa on 3 May 1945. View looks down and aft from Aaron Ward's foremast, with her greatly distorted forward smokestack in the lower center. Photographed while the ship was in the Kerama Retto on 5 May 1945. A mine is visible at left, on the ship's starboard mine rails. Official U.S. Navy photograph now in the collections of the National Archives, 80-G-330107.

In May 1945, destroyer Little (DD-803) was ordered to patrol the waters of Picket Station No. 10 off Okinawa. Operating with destroyer minelayer Aaron Ward (DM-34) and the smaller LSM(R)-195, LCS(L)(3)-15, LCS(L)(3)-25, and LCS(L)(3)-83 (commonly referred to by the “tin can” destroyer Sailors as “pall bearers”), she provided early detection of impending air attacks. This would help to prevent any attacks against the fleet’s much larger vessels, but it also increased the likelihood that Little and her companion vessels would themselves become targets. Although well prepared for this possibility, her crew was nonetheless surprised by the unprecedented degree of coordination and tactical innovation exhibited by the Japanese kamikaze pilots on 3 May 1945.

On that day, Japan commenced Operation Kikusui V, sending approximately 450 total aircraft against Allied ships in various numbers throughout the week. The mass kamikaze attacks had begun shortly after the invasion of Okinawa, sinking at least 12 ships and killing hundreds of Sailors. As Little steamed through calm seas to the west, Seaman First Class Allen W. Barnhart stood at his general quarter’s station at No.4 gun mount reflecting on what sort of mentality drove the Japanese to launch kamikaze attacks, especially against the destroyers off Okinawa.  He recalled thinking to himself, “The Japanese were so suicidal that they were just murdering us.”

At 1813 on 3 May, 18–24 enemy aircraft approached Aaron Ward’'s group from the west. The friendly combat air patrol (CAP) of four Grumman F6F Hellcats scrambled to find the enemy, but failed, most likely losing the incoming aircraft to heavy cloud cover. However, at 1841, a suicider struck Aaron Ward and a second attacked Little. Her crew opened up with 20-millimeter and 40-millimeter gunfire, hitting the Aichi D3A Type 99 carrier bomber (Val”), but the bomber continued its trajectory, crashing into Little amidships near her No. 4 gun mount. A second kamikaze, hit by antiaircraft battery fire, crashed into the sea only moments later.

Two more kamikazes struck Little in quick succession, one amidships, in nearly the exact same spot as the first. The ammunition in the gun mount’s storing room began exploding, causing fires to ignite. The second aircraft, a Mitsubishi A6M Type 99 Zero (“Zeke”), struck the destroyer amidships on her starboard side. A third suicider came down in a vertical dive and crashed into the torpedo mount and main deck, breaking the destroyers keel and opening the lower decks to the sea. With no power throughout the ship, Little lay dead in the water. The kamikaze “just blew us up...We were in deep trouble,” S1c Barnhart remembered.

Seaman Charles E. DeMann watched in horror from his battle station at a 5-inch gun above the bridge. After the last kamikaze struck the ship, he recalled, “I was blown off the top of the director and came down onto the bridge…maybe a drop of 25 feet.” Somehow still attached to his sound-powered telephone, he heard Commander Madison Hall, Jr., (commanding officer), give the order to abandon ship. Shaking off the impact of his fall, DeMann staggered to the side of the ship and went over. It was fortunate that he did, for at 1855, Little broke in two and slipped beneath the waves, some 30 miles off Kume Shima. As survivors entered the water to await rescue, the battle continued around them. Minutes after the destroyer sank, a kamikaze crashed into LSM(R)-195, sending her to the bottom. Over nearly an hour, Aaron Ward suffered six kamikaze hits, but fought on so smaller vessels in the group could save survivors from Little and LSM(R)-195.

Approximately two hours passed before rescue came for the survivors of both sunken ships. Barnhart remembered bobbing up and down in rough seas, darkness enveloping the survivors. Waiting for nearly two hours before rescue arrived, he rode out the swells before suddenly spotting the beam of a flashlight not far from him. Astonished that anyone would turn any type of light on in a warzone, Barnhart watched with relief as a gunboat “spotted me,” put in near him and brought him aboard. Despite the swift and deadly kamikaze attacks from nearly all sides, in such rapid succession, most of Little’s complement of 339 men were rescued. Still, the loss of 30 Sailors killed and a further 79 wounded only added to the horrific toll of casualties the U.S. Navy continued suffering off Okinawa.

Commander Hall, entering the water with his men, later wondered if the kamikazes sinking his ship did so out of luck, skill, or a combination of both. “That such coordination could be achieved is almost unbelievable,” he later commented, “but such appears to be the case.” During the first few weeks of the battle, it appeared the suiciders, often operating individually, were able to strike targets based solely on luck. If able to survive the CAP and a seemingly impenetrable barrage of antiaircraft fire, a lone kamikaze might get through to attempt an attack run. For many Allied Sailors, the realization that the enemy was beginning to coordinate their suicidal attacks only increased their terror. The Japanese pilots learned to break up their massed assaults into smaller groups and attempt strikes on vessels amidships from both the port and starboard sides. The suicider diving in vertically on Little from high above, smashing into and breaking her in two, seemed to confirm this theory. The unfortunate destroyer crew onboard Little were among the first to witness this innovative and deadly series of tactics employed by the kamikaze pilots. “Those suicide pilots knew where to hit,” claimed Barnhart.