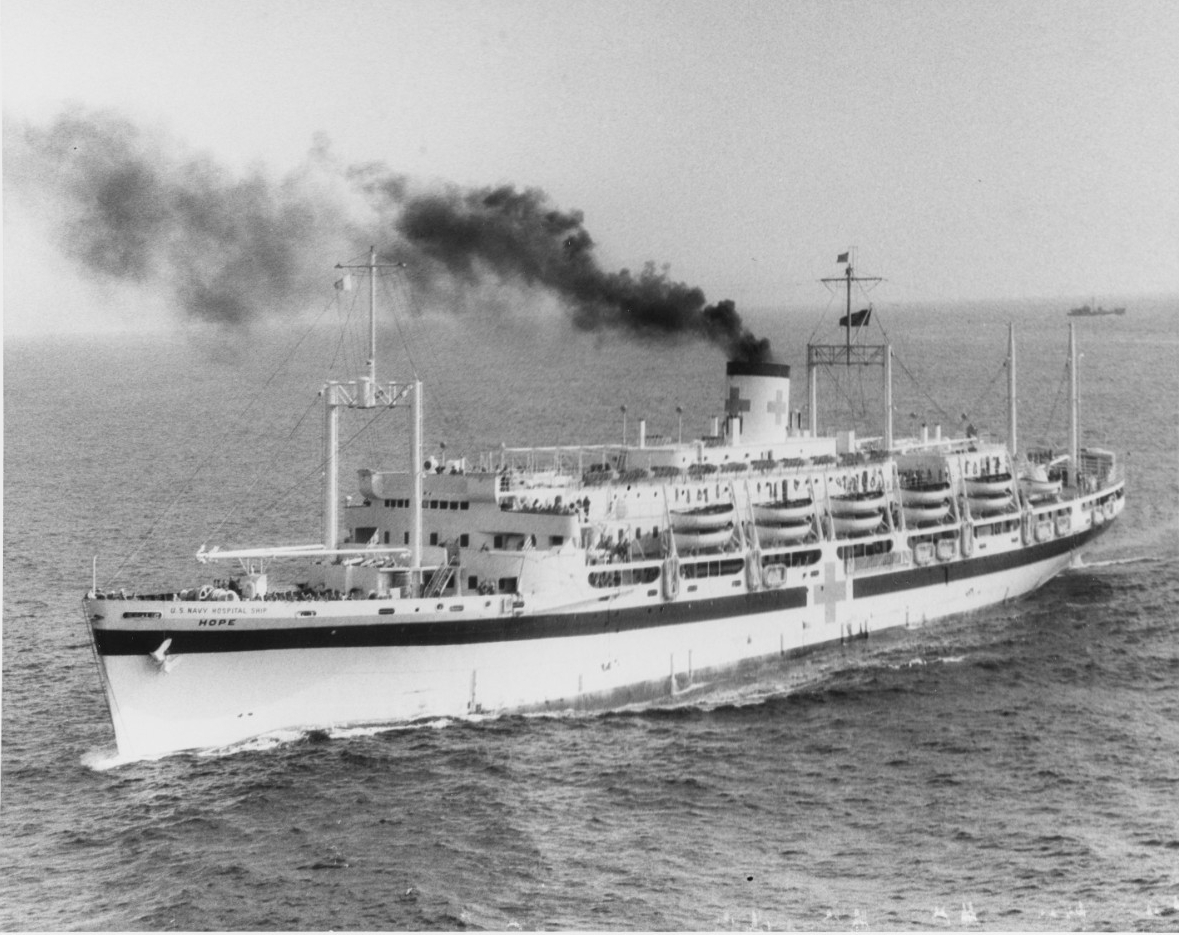 The first Hope retained a former name. The second Hope was given a name descriptive of her duty, and in keeping with the mission of hospital ships.

The second Hope (AH-7) was launched on 30 August 1943 at Wilmington, Calif. by Consolidated Steel Corp., Ltd., after being constructed under a Maritime Commission contract (M. C. Hull 1015); sponsored by Miss Martha L. Floyd; acquired by the Navy the same day for conversion to a hospital ship by U.S. Naval Dry Dock, Terminal Island, Calif.; and commissioned on 15 August 1944, Cmdr. Albert E. Richards in command.

Manned by a Navy crew but carrying Army medical teams, Hope completed her shakedown cruise and sailed on 23 September 1944 to render medical care during the climactic phase of the campaign against Japan. Steaming via Pearl Harbor, Territory of Hawaii, and Manus, in the Admiralty Islands, the ship reached Kossol Passage, in the Palaus, and received soldiers wounded taking the islands of the group.

U.S. soldiers, supported by a vast naval task force, returned to the Philippines on 20 October 1944. Hope arrived at Leyte Gulf on 7 November, to care for casualties, and evacuated them to Hollandia. Thereafter the ship made four more voyages to Leyte to evacuate wounded. During the morning of 3 December she was followed by a Japanese submarine, and that afternoon was attacked unsuccessfully by a torpedo plane. Three days later, as she steamed toward Manus, the hospital ship was again attacked by aircraft. One bomb fell close aboard but no damage resulted. Continuing to evacuate wounded from the Philippines, Hope arrived at Subic Bay on 16 February 1945, just as paratroopers landed on Corregidor, at the entrance to Manila Bay. The ship proceeded on to Lingayen Gulf for evacuation duties, and sailed from Leyte on 6 March for Ulithi, in the Western Carolines.

Hope sailed on 9 April 1945 to take part in the Okinawa operation, arriving off the bitterly-contested island four days later. During the next month, she shuttled between Saipan and Okinawa, often under attack despite her distinctive markings. As Japanese suicide planes attempted vainly to stop the invasion, Hope assisted in rescuing sailors from damaged ships and embarked wounded soldiers. Departing on 12 May 1945, the ship moved back to the Philippines, then moved on to reach Tarakan Island on 3 July to assist, if needed, in the evacuation of Australian casualties in the invasion of Balikpapan.

She then returned to the Philippines, greeting the surrender of Japan on 15 August 1945 at Manila Bay. Much medical and evacuation work remained to be done, however, and Hope sailed on 20 August for Okinawa and Japan, arriving at Wakayama on 22 September to assist in the occupation. She sailed on 22 October with returnees, arriving at San Francisco on 15 November, and subsequently made two more voyages to Guam and the Philippines to bring back the sick and wounded. Hope returned to San Francisco on 22 March 1946 and decommissioned on 9 May 1946.

From 1946 to 1950 she was in custody of the War Department, and entered the Maritime Commission reserve fleet at Suisun Bay, Calif., on 5 January 1950 at 1240. Damaged during delivery, Hope remained in the reserve fleet until sold for non-transportation use on 16 February 1978 to Union Minerals & Alloys Corp., and was physically removed by the purchaser at 1255 on 10 March 1978.

Hope received two battle stars for her World War II service for her participation in the Leyte landings (8–29 November 1944) and the assault and occupation of Okinawa Gunto (13 April–12 May 1945).