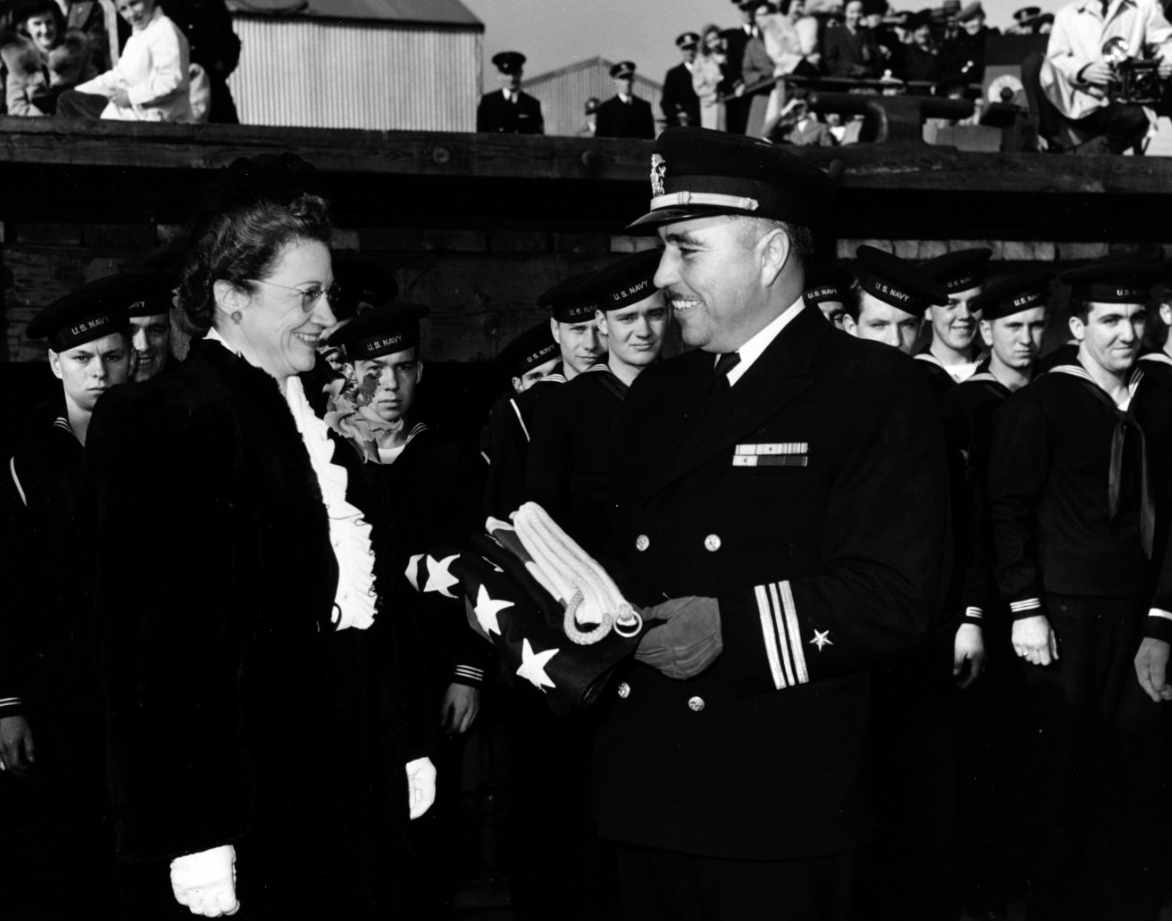 Then-LCDR Ernest E. Evans at the commissioning ceremonies of Johnston (DD-557), Seattle, Washington, 27 October 1943. He was Johnston's commanding officer from then until she was sunk in the Battle off Samar, 25 October 1944, and was lost with the ship (NH 63499). 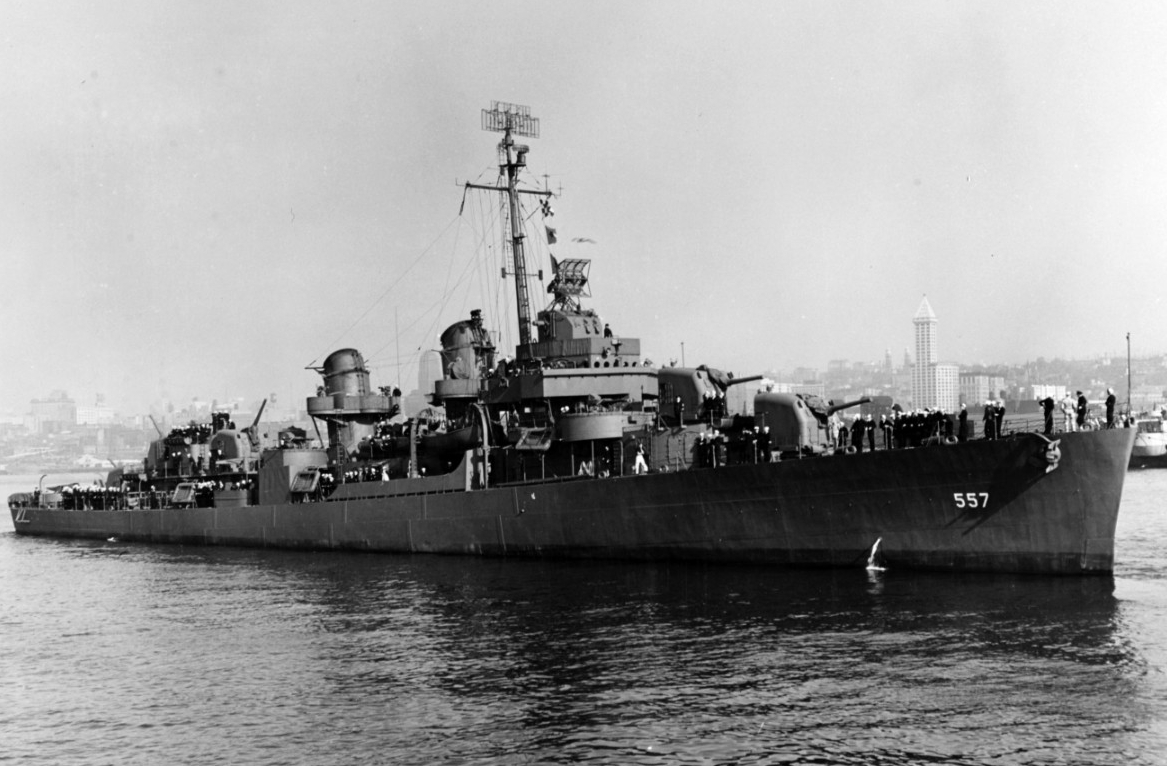 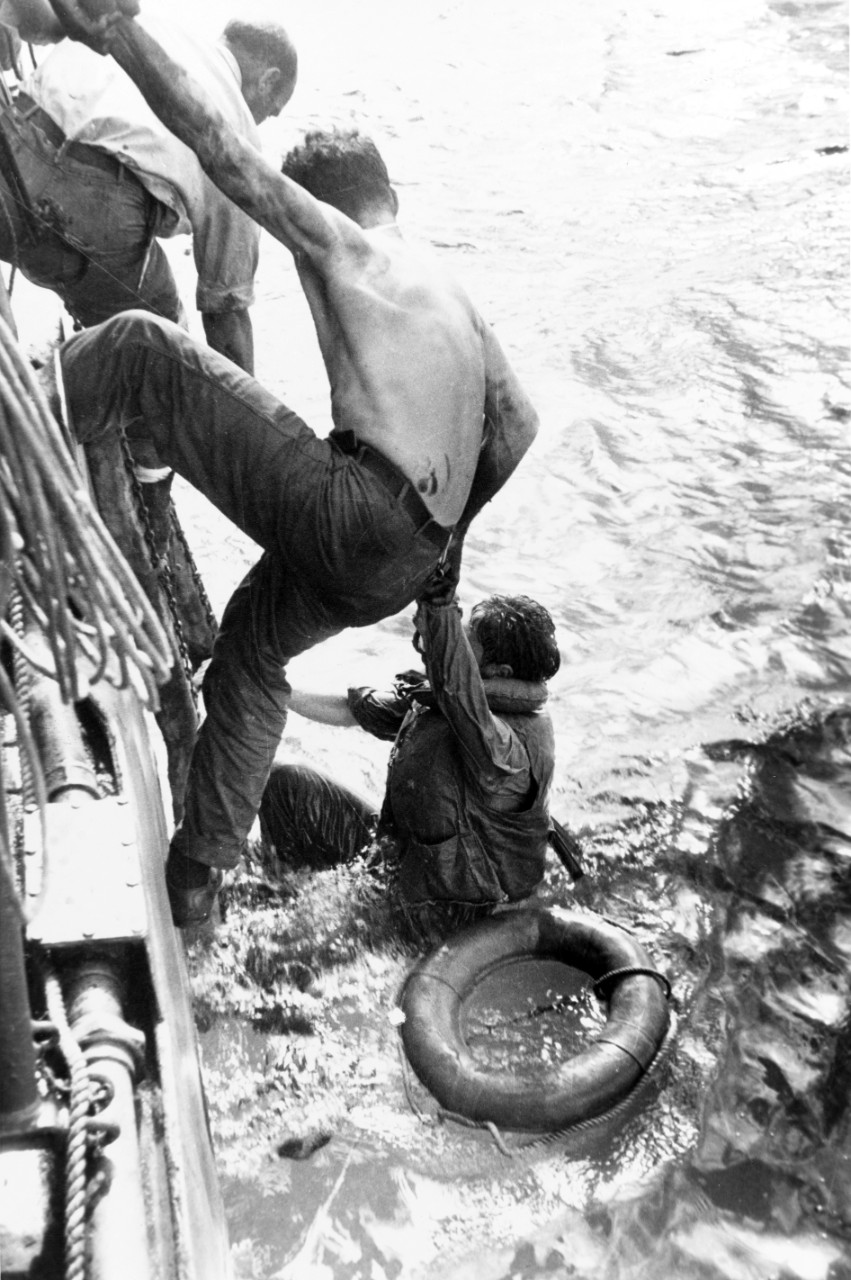 At first light on 25 October 1944, huge geysers of water shot up near the destroyer Johnston (DD-557) . That ship and half a dozen other American destroyers were escorting half a dozen jeep carriers off Samar. A shaky voice on Johnston’s talk between ships radio reported “a major portion” of the Japanese fleet 15 miles astern. Commander Ernest Evans, the skipper, burst out of his sea cabin, barking out orders: All hands general quarters! Light off all boilers for maximum speed! Make smoke!

Ernest Evans had come up the hard way, harder than most. His white paternal grandfather had married a Creek Indian woman just to gain control of her land allotment. He soon divorced her and disowned their child. That child grew up to be his father; his mother was a full-blooded Cherokee. Born “into a world of low prospects and ill will,” Ernest beat what seemed impossible odds. Amid intense prejudice against Native Americans, he graduated from a nearly all-white high school, joined the National Guard, transferred to the Navy enlisted service, won an appointment to the Naval Academy without political pull, and graduated with the class of 1931.

As the light grew, the pagoda-like superstructures of four Japanese battleships, eight cruisers, and 11 destroyers appeared over the horizon. Johnston’s task unit, dubbed Taffy Three, were all that stood between the Japanese force and MacArthur’s troops on shore while the rest of Halsey’s Third Fleet chased a decoy force of Japanese aircraft carriers.

Without waiting for orders, Evans gave the command to commence a torpedo run against the enemy. Johnston steered toward her target, an enemy cruiser, veering and fishtailing toward enemy shell splashes in the belief that “lightning doesn’t strike twice.” Evans closed to less than 10,000 yards before loosing a spread of torpedoes. Several of them blew the bow off the Japanese cruiser.

For more than three hours, Johnston engaged the enemy. Evans’s aggressiveness, along with that of other American destroyermen and aviators from Taffy Three, led the Japanese to believe they were facing a much larger force and caused them to turn away.

The price was steep. Evans and many of his shipmates were killed as Japanese fire eventually overwhelmed Johnston, sending her to the bottom. Although severely wounded early in the battle, Evans pressed the attack until he vanished when his ship went down. For his “valiant fighting spirit,” he was posthumously awarded the Medal of Honor.